Art-Historical Poses You Should Know 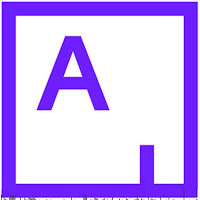 Art
6 Art-Historical Poses You Should Know
By Sarah Gottesman
Try to recreate the pose of Michelangelo’s David (1501–04) or Botticelli’s Birth of Venus (c. 1486). Or recline on a chaise-longue to mimic Édouard Manet’s Olympia (1863). You’ll find that these gestures can feel quite different than they look—and that some of art history’s most famous poses are altogether impossible to reenact.
Yet, regardless of their anatomical accuracy, certain classic poses are assumed again and again by the figures of Western art history. According to this visual vocabulary, the placement of an arm or a leg can transform an anonymous figure into an emperor, a goddess, or even an eternal soul. Below you’ll find six of art history’s most popular gestures, along with the stories behind this ancient body language. 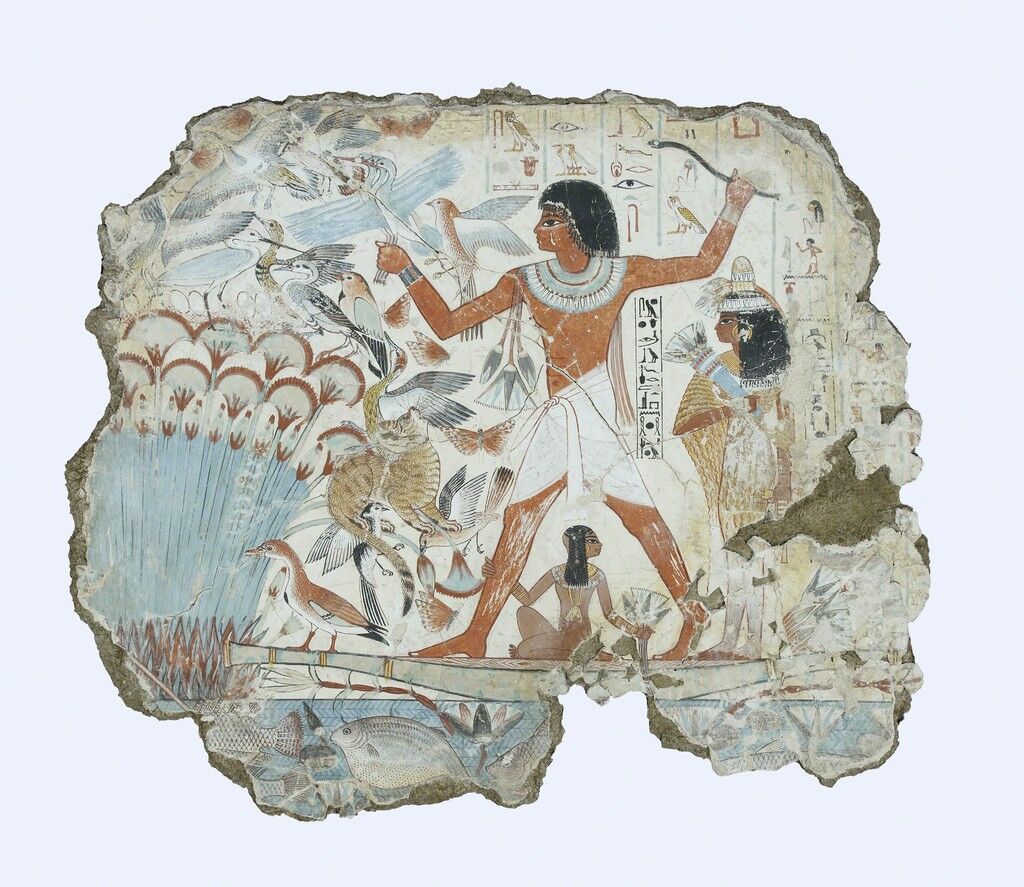 Nebamun hunting in the marshes, fragment of a scene from the tomb-chapel of NebamunLate 18th Dynasty-around 1350 BCBritish Museum
The ancient Egyptians represented the body in an impossible twist, combining multiple perspectives into a single stance. In this composite pose, used in reliefs, stelae, and wall paintings, the torso faces forward, while the head, hips, and legs are shown completely in profile. And even though the figure’s face looks out to the side, its single, almond-shaped eye stares directly at the viewer.
Why contort the body this way? One reason is practical. Noses and feet are easier to draw from the side, while eyes and shoulders are easier to draw straight-on. Go ahead and try it—you’ll find that this is one of the simplest poses to copy on paper, even though it’s among the hardest to recreate with your body.
But these contortions also had spiritual implications. The ancient Egyptians believed that souls needed earthly homes, such as sculpted sarcophagi or painted portraits, to survive after death. Designed to convey this sense of eternal life, the composite pose presents figures as unwavering, motionless, and altogether timeless. 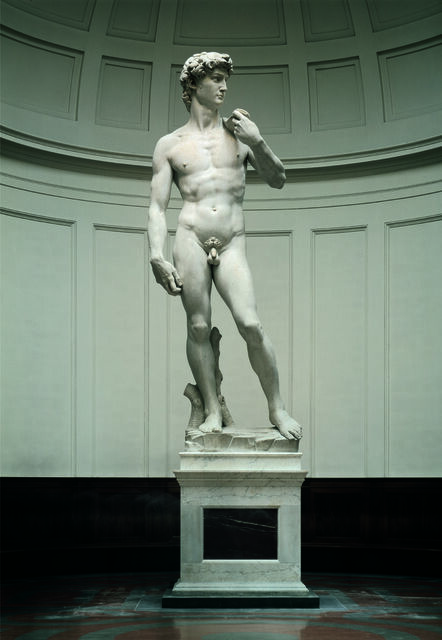 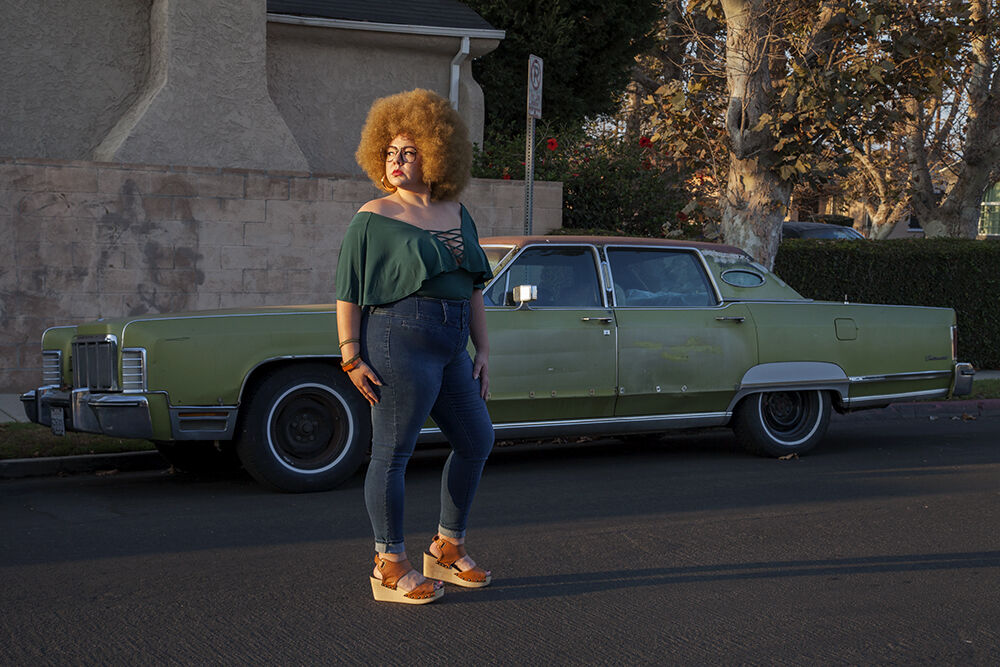 Genevieve GaignardCompton Contrapposto2016Shulamit Nazarian
While the composite pose portrayed eternal stillness, the Greek-invented contrapposto (or counterpose) captured the body in motion. Figures in contrapposto appear to be caught in the middle of taking a step. They lean all of their body weight on one leg (sometimes called the “engaged” leg), while their other, more relaxed leg bends at the knee. The torso, shoulders, and head tilt away from the straightened leg, activating the body in a dynamic twist.
Contrapposto could fool viewers into thinking that a hunk of marble or a stretch of canvas was a living, breathing human being—and this sense of effortless naturalism captivated the Greeks. Once you know the pose, you’ll spot it everywhere, from Renaissance masterpieces like Michelangelo’s Davidto the contemporary photographer Genevieve Gaignard’s Compton Contrapposto (2016).
But while contrapposto might look natural, it surely doesn’t feel natural. To prove this, the conceptual artist Bruce Nauman tried to remain in this historical pose while moving through a narrow passageway in his 60-minute video performance Walk with Contrapposto (1968). The result? An awkward, constricting limp—far from the effortlessness the Greeks intended. 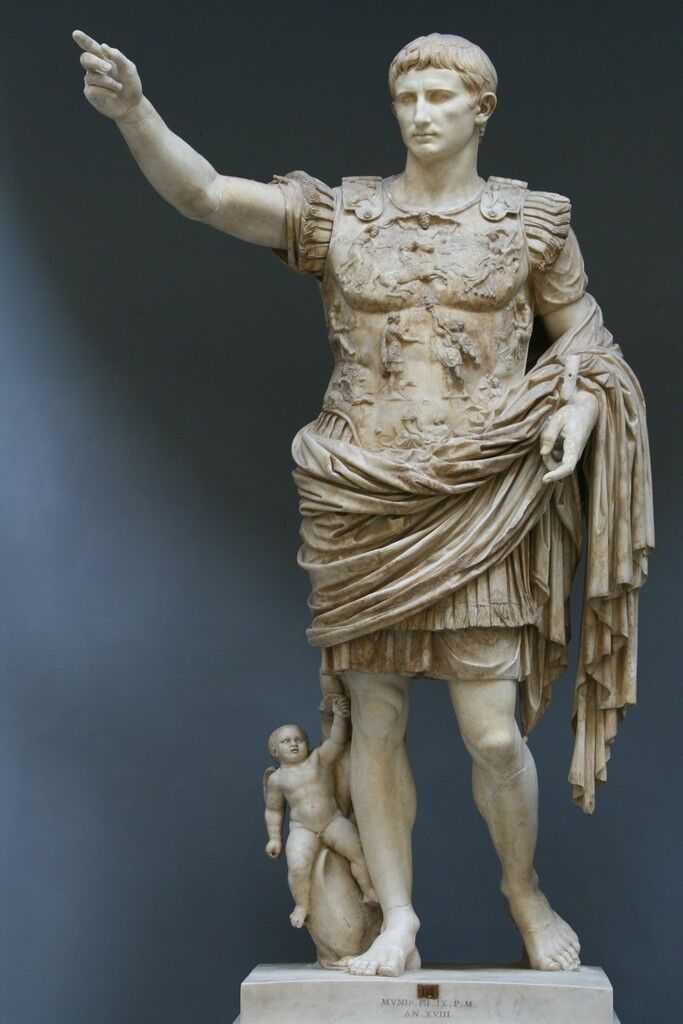 Augustus of Primaporta, perhaps a copy of a bronze statue of ca. 20 B.C.Early 1st centuryMusei Vaticani,... 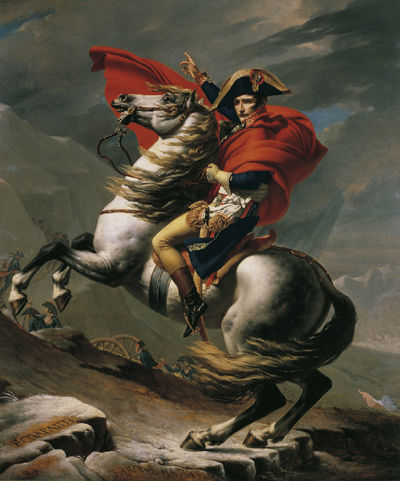 Jacques-Louis DavidNapoleon at the Great St. Bernard1801Belvedere Museum
If you stand in contrapposto, lift your right arm, and raise your index finger, you’ve made it into the adlocutio (or orator’s) pose. In art history, this commanding stance is reserved mostly for leaders, especially those addressing their troops during battle.
The ancient Roman sculpture Augustus of Primaporta (1st century A.D.) remains the most famous example of the adlocutio—though many artists have continued to employ this pose since. When the Neoclassical master Jacques-Louis David painted Napoleon at the Great St. Bernard (1801), he lifted the French leader’s right arm to echo that of the iconic Augustus. Gilbert Stuart did the same when capturing George Washington (1796), and most depictions of Chairman Mao feature this gesture as well.
But why do these leaders raise their right arms (rather than the left)? In Western art traditions, the right side of the body is symbolically linked to righteousness and divinity. For example, paintings of the Last Judgement will feature the blessed rising to heaven on Christ’s right side, while the damned fall on his left. In early marriage portraits, men stood to the right of their wives to signal their elevated status in the union. Accordingly, the raised right arms of Augustus, Napoleon, Washington, and Mao link their power to the heavens and pay homage to the great leaders of the past. 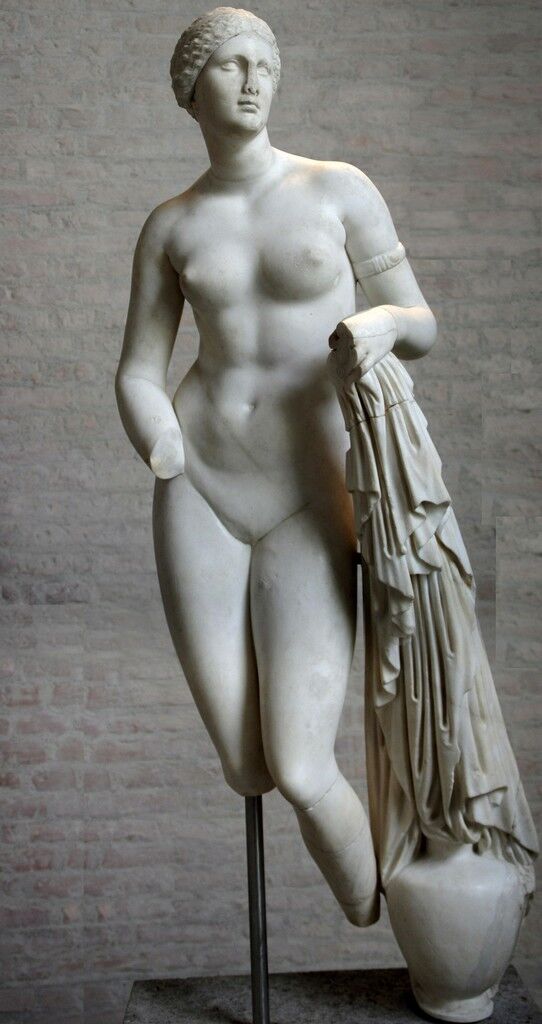 PraxitelesAphrodite of Knidos, Greco-Roman variant on the original marble of ...

MasaccioThe Expulsion from Paradiseca. 1427Brancacci ...
Praxiteles’s Aphrodite of Knidos (4th century B.C.) is considered to be the first monumental sculpture of a naked woman in Western art. (Men, on the other hand, had already been unclothed in sculptures for over 300 years.)
For this pioneering subject matter, Praxiteles needed to invent a new pose—along with a narrative to justify his figure’s unprecedented nudity. Standing in contrapposto, Praxiteles’s Aphrodite notices a stranger intruding on her bath. In the original, the goddess recoils, rushing to cover her pubis with one hand and grabbing her garment with the other. (Today, surviving copies of Aphrodite appear exposed, as her marble arms have not survived.)
This pudica (or modest) pose quickly became standard iconography for women in art, heralded for its eroticism. By covering themselves, women in the pudica pose have tantalized viewers, drawing attention to their sexuality. And while the posture has been adopted by countless artists—including Botticelli, Rembrandt van Rijn, and Pablo Picasso—it’s easy to forget the troubling narrative at its core: the gesture of a woman protecting her body from unwanted advances. 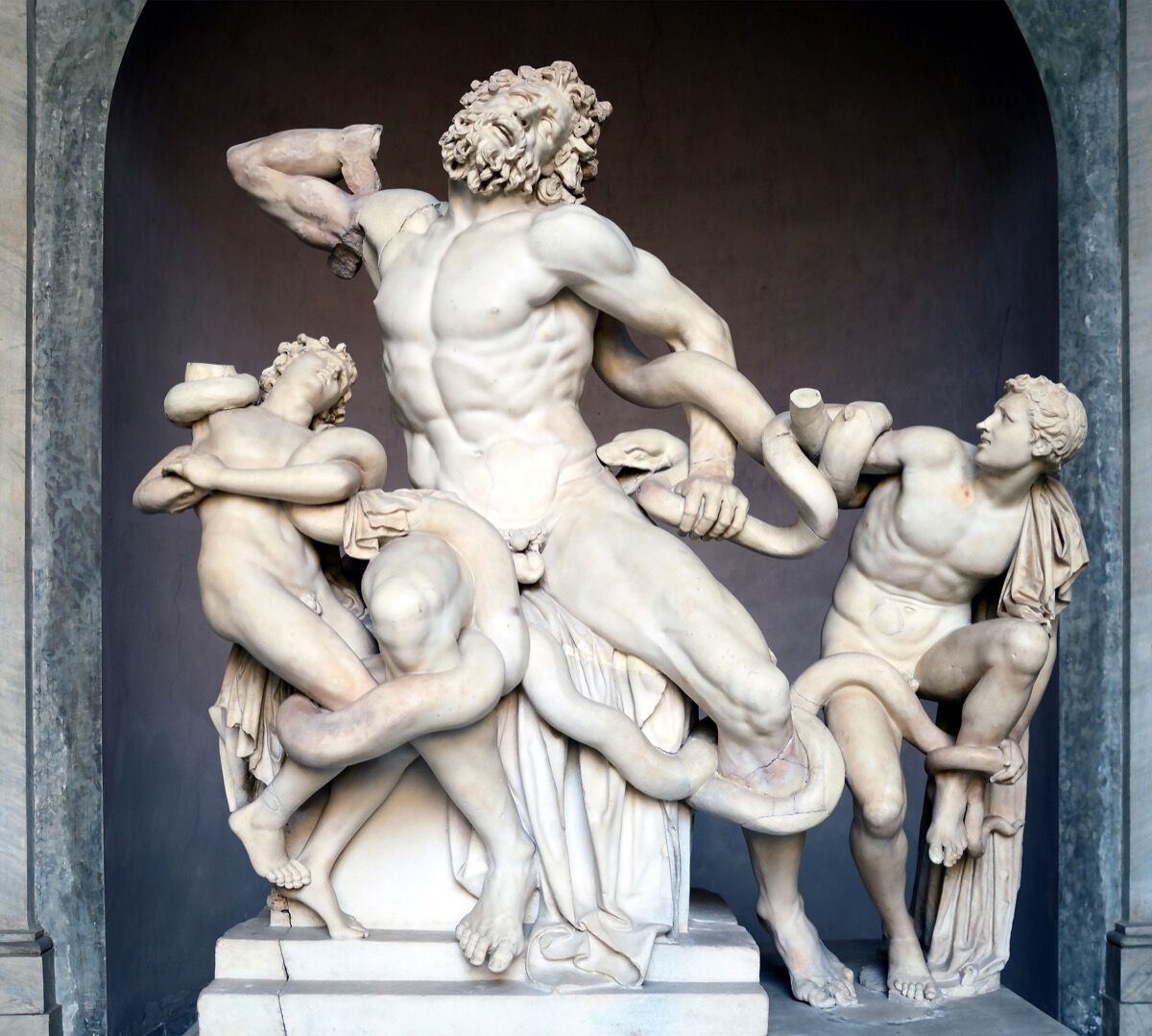 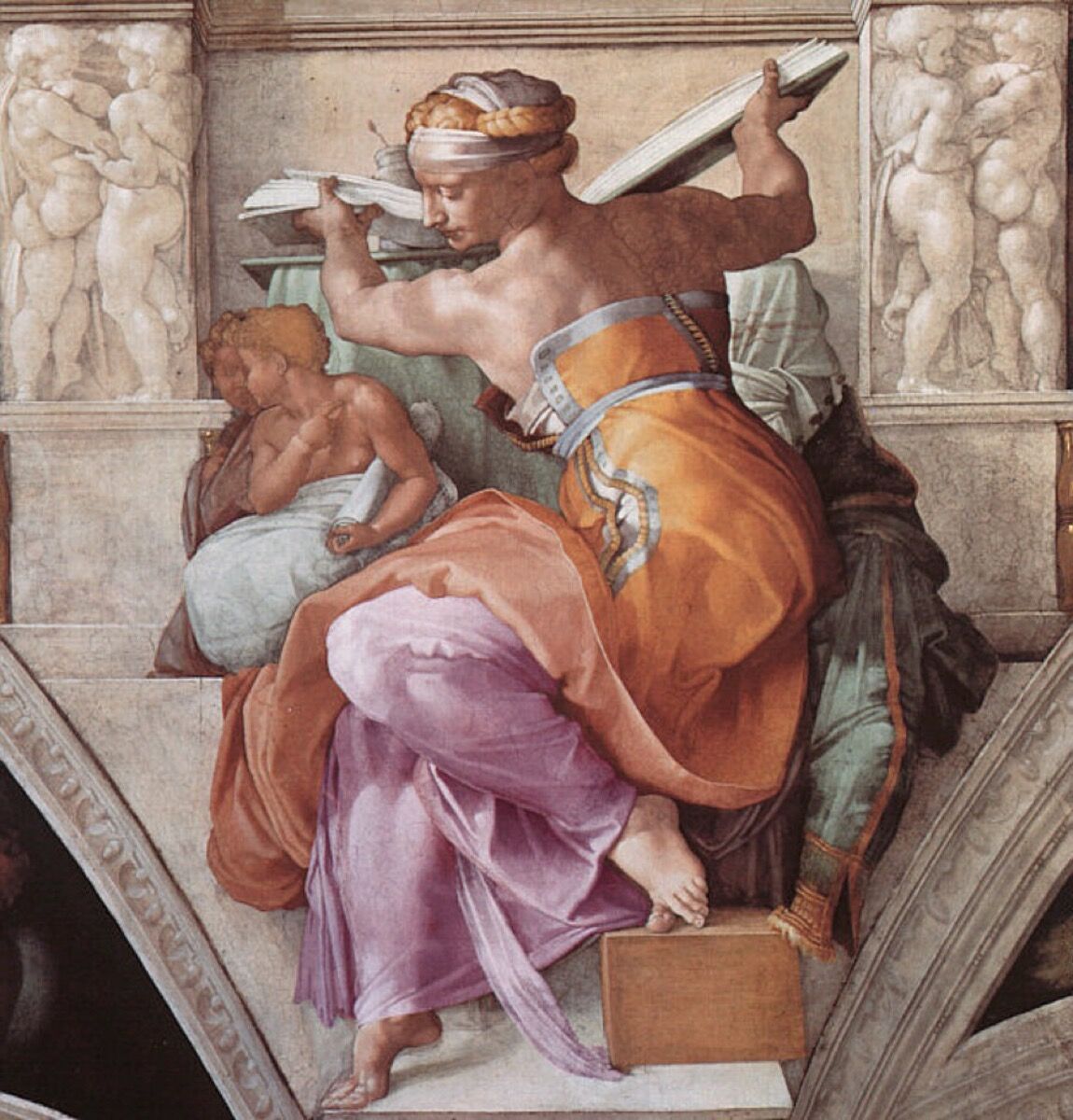 On a winter day in 1506, the Hellenistic Greek masterpiece Laocoön and His Sons (c. 40–30 B.C.) was discovered in a Roman vineyard. Before the piece was fully unearthed, Michelangelo had already rushed to the scene, anxious to study and sketch the ancient marble figures.
The sculpture was a revelation, filled with dramatic contortions previously unseen in Western art. Instead of a slight twist, Laocoön’s entire body completely spiraled on its central axis—his lower limbs pushing in one direction and his torso spinning the other way. This serpentine pose (or figura serpentinata, in Italian) transfixed Michelangelo, and many of his later sculptures and paintings mimic Laocoön’s coiling body.
Serpentine poses are arresting, sensuous, and almost always unnatural. (Few would twist their body in opposite directions by choice.) This exaggerated tension appealed to Mannerist and Baroque artists like Agnolo Bronzinoand Gian Lorenzo Bernini, respectively, who wanted to imbue their images with movement, rather than naturalism. For many, Laocoön had cast a shadow over the standard contrapposto, showing that bodies could express much more emotional drama than the effect of a single step.

Guerrilla GirlsDO WOMEN STILL HAVE TO BE NAKED TO GET INTO THE MET. MUSEUM?2012"Guerrilla Girls: Is it even worse in Europe?" at Whitechapel Gallery, London (2016-2017)
Four years after the discovery of Laocoön, another art-historical convention emerged. In 1510, the Renaissance painter Giorgione (perhaps with a little help from his pupil Titian) painted the first reclining female nude. Following the pudica pose, Giorgione’s Sleeping Venus (1508–10) covers her sex with one hand while sleeping atop some drapery in a picturesque landscape. The erotic display, designed to please its male viewers, was only admissible because it featured a goddess, rather than a “real” woman.
During the 18th century, colonial expansion exposed artists to Eastern cultures—and many painters became fixated on the subject of the Ottoman harem. Instead of depicting Venus, artists like Jean-Auguste-Dominique Ingres and Eugène Delacroix began to paint the odalisque (or harem chambermaid) in a similarly suggestive, reclining pose. Though she wasn’t a goddess, the odalisque was still considered “other” enough to sexualize the figure without reproach.
With Olympia, Manet became the first known artist to place a modern white woman in this pose—and shocked audiences. Olympia doesn’t lie passively with her eyes closed, but rather looks directly at viewers, confronting their gaze.
And though the painting was revolutionary, Olympia also added to the long list of artworks by male artists featuring nude women in this pose. In 1989, the Guerilla Girls famously drew attention to this trend by creating a poster of an odalisque with the provocation: “Do women have to be naked to get into the Met Museum?”
Sarah Gottesman