In America, we want our women to be girls and our girls to be sex fairies, and for those sex fairies to live next door to us, for some reason. This Sharktaugust, there is only one such radiant sex-fairy star to watch. In fact, you should probably close your eyes when she’s offscreen and sort of block out with your fingers the parts of the screen she’s not on when she’s in a scene with someone else. Unless you are a complete idiot, you already know this star’s name: Jane Neighbor.
Neighbor is twenty-eight and twenty-two, at once. She is a kind of gorgeous that can only be found in or very near rivers. She is blonde but also blond, depending on the spelling. She is tall when she is on a ladder, and medium-­tall when she is halfway up the ladder. Her eyelashes spell “glory.” Her naked hands can open wet jars, with just the strength of her slender fingers. She can be sexy and pointy and things that aren’t even adjectives, like glossary, or aren’t even words, like hilabrion. Her voice sounds like a truck full of rain.
As I said, she is from Portugaria. Or maybe I didn’t say that yet. Anyway, that’s where she’s from. To understand her, you must take a plane to where she is from, or read the Wikipedia page about it, or learn Portugarian, or just speak decent English, because she’s fluent and actually doesn’t even have much of an accent.
Portugaria is America a few hours ago, because of the time difference. Its people are a simple people, a throwback people, like Americans but a few hours ago. In Portugaria, they watch  Portugarian “The Ellen DeGeneres Show,” which is the exact same show as America’s “The Ellen DeGeneres Show.” In Portugaria, every young, ambitious actress dreams of Hollywood and its mythic, far­away opportunities for stardom, and every other person just has that dream where all of his teeth fall out.
Recently, I met Jane under a bridge next to a defunct dentist’s office, on the Lower North Side of somewhere in Queens. (It’s a celebrity haunt, in that I think some famous people were maybe killed there.) I don’t remember what she was wearing, but I think it was hair? Something was on the front of her head—either glasses or a nose. I probably should have taken notes. She made noises with the lower part of her face, and I was mesmerized.
By now you know all about Neighbor’s successes: summer blockbusters, winter barnbusters, suppertime bustblockers, even movies. I asked her what it was like to be the new face of Sheila, in the remake of the megahit “Sheila the Exorbitant,” and she shrugged her delicate bones into a croissant­-like shape and laughed a tinkling laugh. Then she responded, but I wasn’t listening.
The thing is, everyone wants to author the story of Jane. The famous director Allan Harkness called her “in one word, a French horn.” The less-famous director Alan Hankress called her “in three words, a French horn.” But is she? Really? Can we remove the girl from the nudity, and the actress from the horn? At least for long enough to write about it?
Back under the bridge, Jane was looking at me, and I was looking at her, and we were both expectant—she, that I would ask her another question, and I, that she would just kind of say something. The seconds passed, laden with silence, her very presence a lie. (It is far smaller than it appears on a large movie screen.)
I asked what it was like to have her sexy parts mash up against famous actors’ sexy parts. Her answer was both short and long, in turn: a sigh and a string of syllables forming words that formed a sentence. I let it hang there, laden with fragility and malaise. I thought about my financial portfolio, and what I had and hadn’t eaten for dinner, and how a large man might look in a short robe. I knew that, years later, I would remember this moment—so lush with silence and yet so not full of speaking.
Eventually, she said, “Oh, I think that’s my Uber,” and picked her way back across the sands of forgotten periodontics, her blondness effulgent, and then evaporating into the night like the last pale crumbs of a Portugarian pastry, the only evidence of her ever having done this interview a single, lonesome note of a French horn.


More From the New Yorker 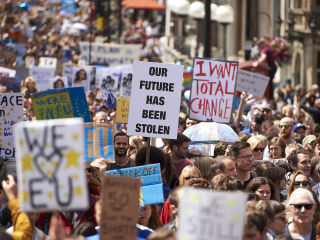 The United Kingdom holds one of the world’s financial capitals; its decision to leave the European Union caused an earthquake in the markets. Even as markets stabilize, the political and economic uncertainty in Britain continues. James Surowiecki, who writes The New Yorker’s Financial Page column, spoke with Sony Kapoor, a British macroeconomist and the managing director of the think tank Re-Define, as well as a staunch opponent of Brexit. The British, Kapoor said, have been acting like the “spoiled brats” of Europe, complaining about a sweet deal full of special exemptions and then wanting more. “Whatever comes to us in terms of, let’s say, the E.U. playing hardball,” he said, “it’s entirely self-inflicted and very well-deserved.” The complexities of extrication, he thinks, put the Leave camp in a position that is politically impossible, and that might be a good thing for the future of the E.U.

More from Politics and More Podcast
Send me a weekly round-up of the latest New Yorker podcasts.