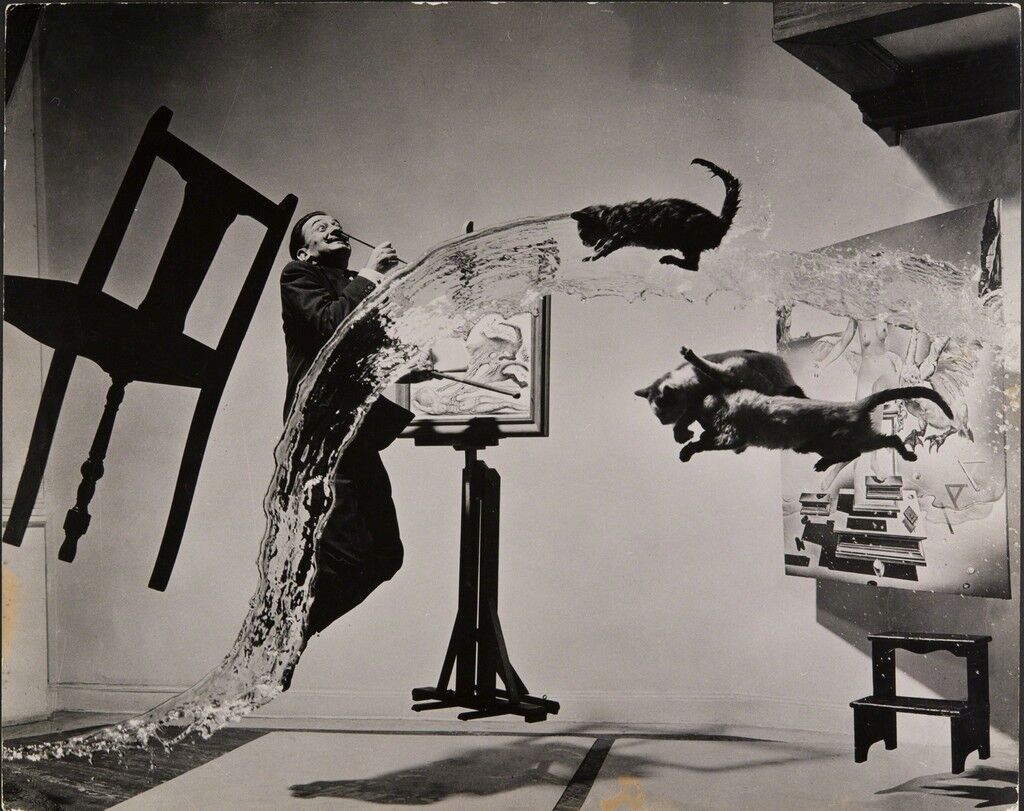 Philippe Halsman
Dalí Atomicus, 1948
"Philippe Halsman, Astonish Me!" at Musée de l'Elysée, 2014
Before photographer
Philippe Halsman
and
Surrealist
Salvador Dalí
settled on the idea of tossing three cats into the air for the photograph Dalí Atomicus (1948), the Spanish artist suggested they blow up a duck using dynamite. Considering it took 26 attempts to pull off the picture of a levitating Dalí in a chaotic airborne scene, Halsman’s insistence against the first idea was decidedly the best course of action.
Halsman, a mid-century portrait photographer, sought to lift the veil on his subjects, however briefly, to reveal their innermost being. “A true photographer wants to try to capture the real essence of a human being,” he once famously said. But capturing the essence of Dalí was a complex task. Over nearly four decades, Halsman photographed the artist on many occasions, spurring the most iconic black-and-white portraits of the Surrealist.
Dalí Atomicus was an early example of the practice Halsman called “jumpology.” To capture the true spirit of his subjects—primarily celebrities and public figures who were accustomed to having a lens trained on them—he began asking them to take a jump after each photo session. “When you ask a person to jump, his attention is mostly directed toward the act of jumping and the mask falls so that the real person appears,” he once explained. 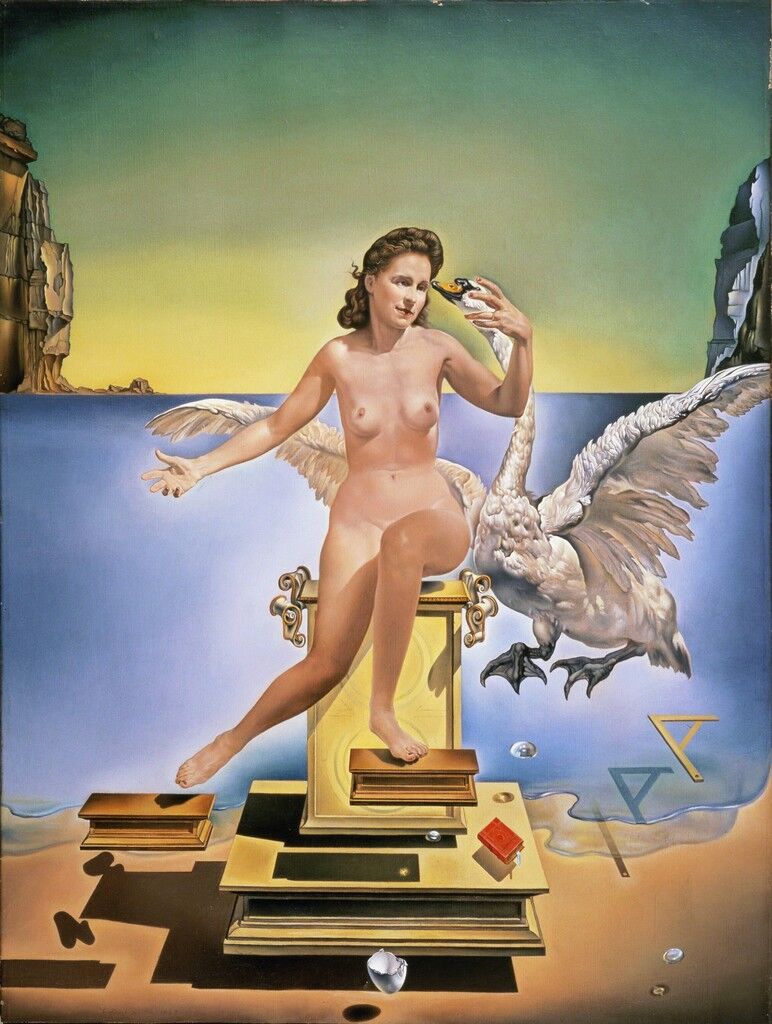 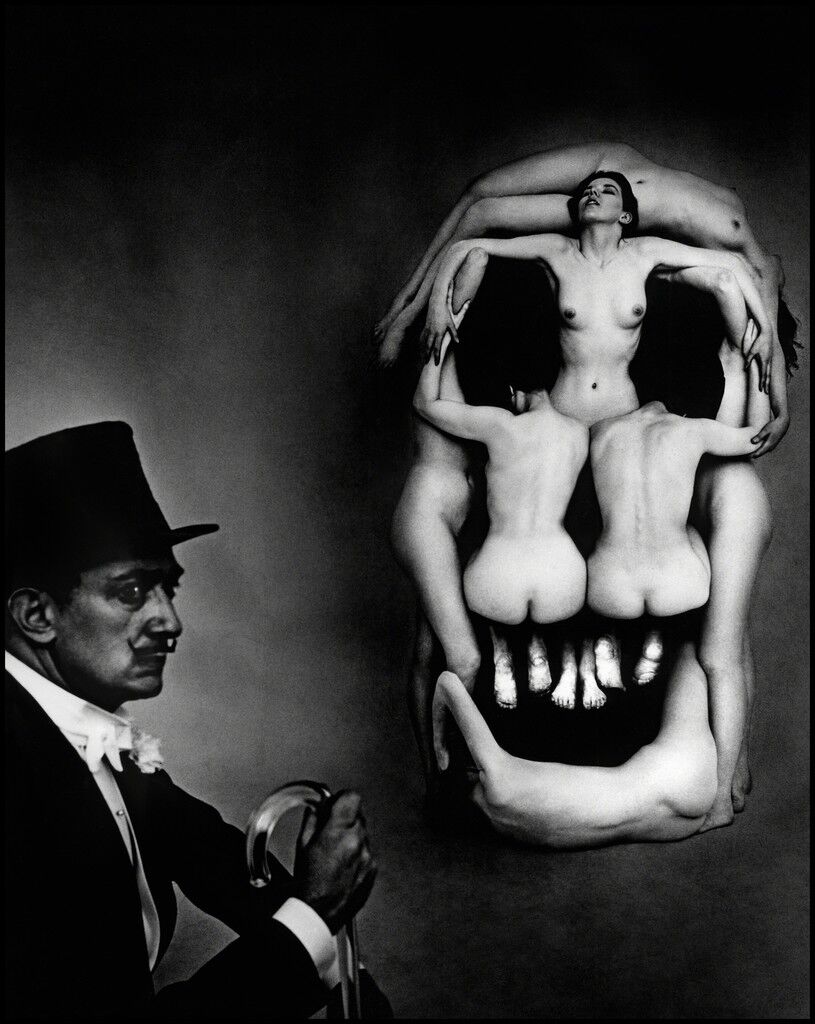 Philippe Halsman
In Voluptate Mors, 1951
°CLAIR Galerie
But years before he convinced Audrey Hepburn, Grace Kelly, Richard Nixon, and the Duke and Duchess of Windsor to each take a leap of faith, he staged the outlandish (and, ultimately, duckless) shoot of Dalí. The artist appears suspended in the air amid three flying cats, a stream of water, and floating furniture.
When Dalí and Halsman became close friends in the 1940s, Halsman had experienced a great deal of hardship in his life. The photographer, born in Riga in 1906, was falsely convicted of killing his father in 1928, and he was sentenced to four years in prison, where he contracted tuberculosis. He was released two years early, following a successful campaign led by his sister, Liouba, which included a letter by German physicist Albert Einstein. Einstein would come to Halsman’s aid again in 1940 after the photographer had established his career in Paris, obtaining a U.S. visa for Halsman in order to help him escape the Nazi invasion of France. (Halsman’s deeply emotional portrait of Einstein, taken seven years later, would become one of his most famous works.) 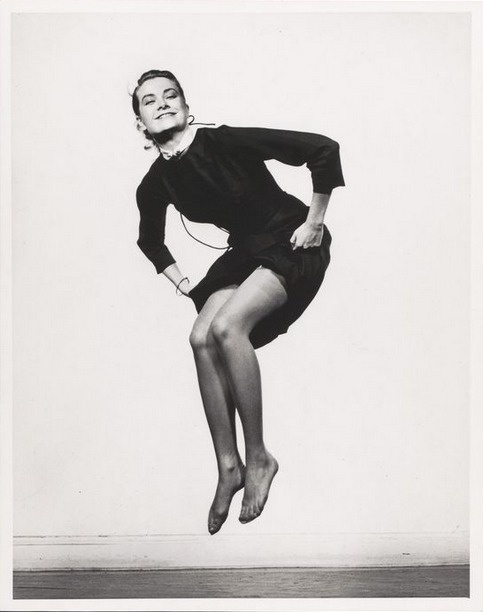 4 Images
View Slideshow
The first portrait that Halsman took of Dalí in 1941, atop a New York roof, cemented their friendship. It led to bodies of work such as the absurdist (and aptly titled) book Dalí’s Mustache (1954), featuring 36 views of his collaborator’s famous waxed mustache. Other compositions, which placed Dalí in uncanny worlds not unlike those of his own imagination, took time and painstaking detail to pull off. In Popcorn Nude (1949), Dalí thrusts his leg into a high kick as popcorn kernels and baguettes explode around a nude model. And to create In Voluptas Mors (1951), it reportedly took Halsman three hours to arrange the women’s bodies so that they formed the illusion of a skull.
Dalí Atomicus also required intense preparation. Halsman drew his inspiration from the artist’s painting Leda Atomica (1949)—the work, which Dalí began in 1945, is pictured in the back-right of the scene. But unlike the painting, he wished to have all elements of the photograph hang in the balance. 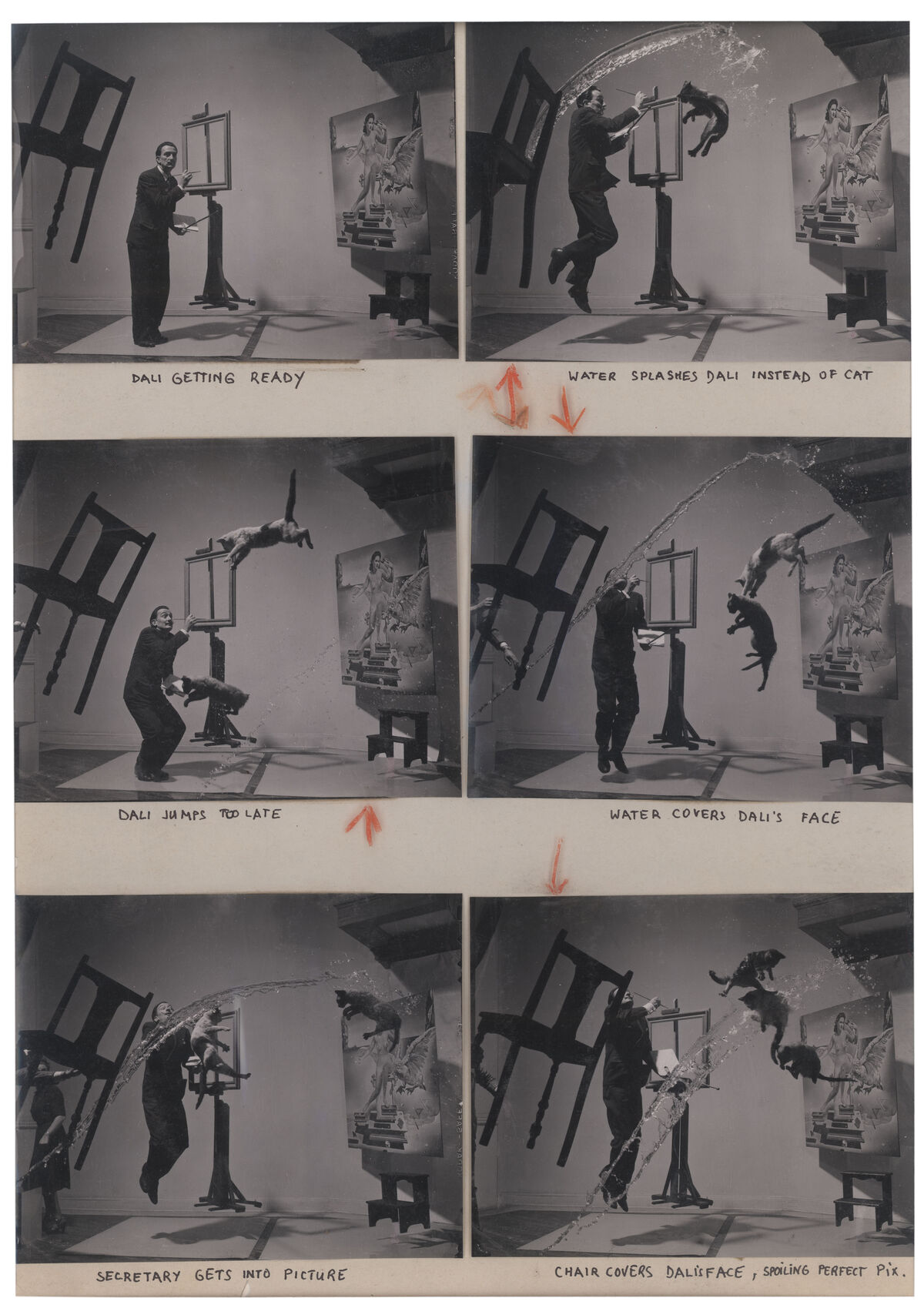 Philippe Halsman, Dali Atomicus, 1948. © Philippe Halsman/Magnum Photos.
The original, unretouched version of the photo reveals its secrets: An assistant held up the chair on the left side of the frame, wires suspended the easel and the painting, and the footstool was propped up off the floor. But there was no hidden trick to the flying cats or the stream of water. For each take, Halsman’s assistants—including his wife, Yvonne, and one of his daughters, Irene—tossed the cats and the contents of a full bucket across the frame. After each attempt, Halsman developed and printed the film while Irene herded and dried off the cats. The rejected photographs had notes such as “Water splashes Dalí instead of cat” and “Secretary gets into picture.”
When Halsman was finally satisfied with the composition, Dalí added a finishing touch to the printed photograph: the swirls of paint that appear on the easel. The final image was published in Life magazine. (Halsman, incidentally, holds the record for the most Life covers ever shot—101 in total.)
Though they were two creative minds at the height of their careers, the relationship between Dalí and Halsman was never competitive, as Irene Halsman explained in a 2016 video about the photograph for Time. “Dalí never really wanted to photograph; Philippe never really wanted to pick up a paintbrush,” she said. “But together, they collaborated and made the most outrageous pictures.”
Jacqui Palumbo is Artsy’s Visual Culture Editor.
Related Stories

10 Photographers Who Have Told the Story of the U.S.–Mexico Border
Stir Creativity
See how Bombay Sapphire supports artistry.

Brooke Shields on Being a Muse for Warhol, Avedon, and Fischl 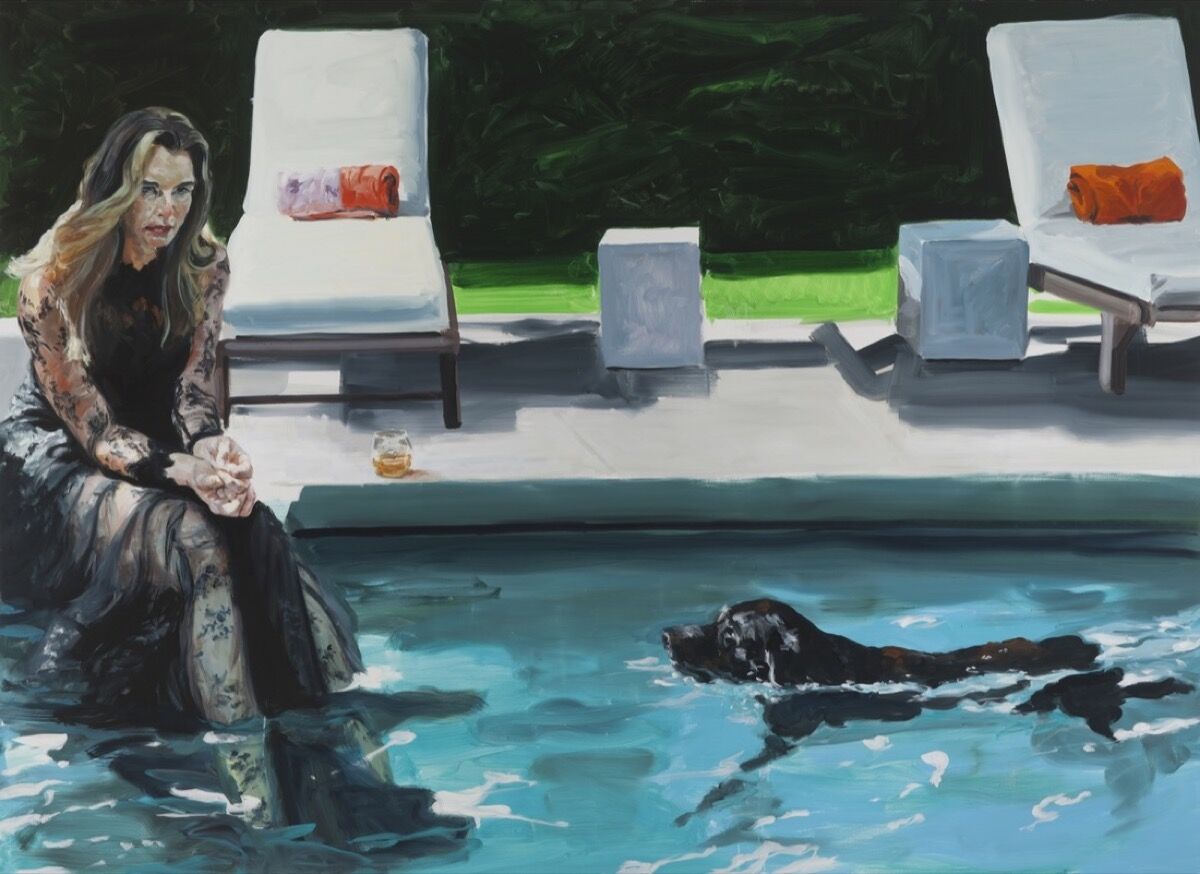 Eric Fischl, Daddy’s Gone, Girl, 2016. Courtesy of the New York Academy of Art.
Brooke Shields isn’t the typical artist’s model. She’s been a celebrity for decades, acting in films like Pretty Baby (1978) and The Blue Lagoon (1980), and posing for high-profile photographers and fashion campaigns. (“What gets between me and my Calvins? Nothing.”)
So
Eric Fischl
didn’t exactly have an ingenue on his hands when the two paired up for a photo shoot. Asked to contribute to an auction for Southampton’s Parrish Art Center in 2013, the painter offered the opportunity for the highest bidder to sit for a portraiture session that would culminate in a collaged artwork. Chris Henchy, Shields’s husband, was the winning bidder.
A year later—Shields’s schedule was hectic—Fischl arrived at her Southampton home. The actress had hired a hairdresser and make-up artist, and brainstormed characters she could personify in front of the camera. Shields told Fischl that she is a Gemini and often feels as though she is two people at once. Fischl came up with a narrative about a pair of twins—one who followed social conventions (wearing white and a hat to the Hamptons Classic horse show) and one who didn’t. Shields developed a series of costumes that would correspond to the theme.
“The thing about Brooke,” Fischl recently told me by phone, “is that she’s such a good actor, she disappears.” He didn’t feel he was capturing a celebrity, but rather an invented persona. Fischl, who’s known for eerie depictions of upper-class Americana, generally catches his models unaware. He takes candid photographs of people without their knowledge, looking for “authenticity, rather than preconceived gesture.”
Even when he uses live models, Fischl prefers in-between moments, like when his subjects are shifting posture or walking away from the camera. Until 2000, during a project for a German museum, he hadn’t enlisted actors to pose for him. The experience was something of a revelation. “Actors come alive,” he said. “They use their bodies in deep, expressive ways.” Their drama fuels his own practice. 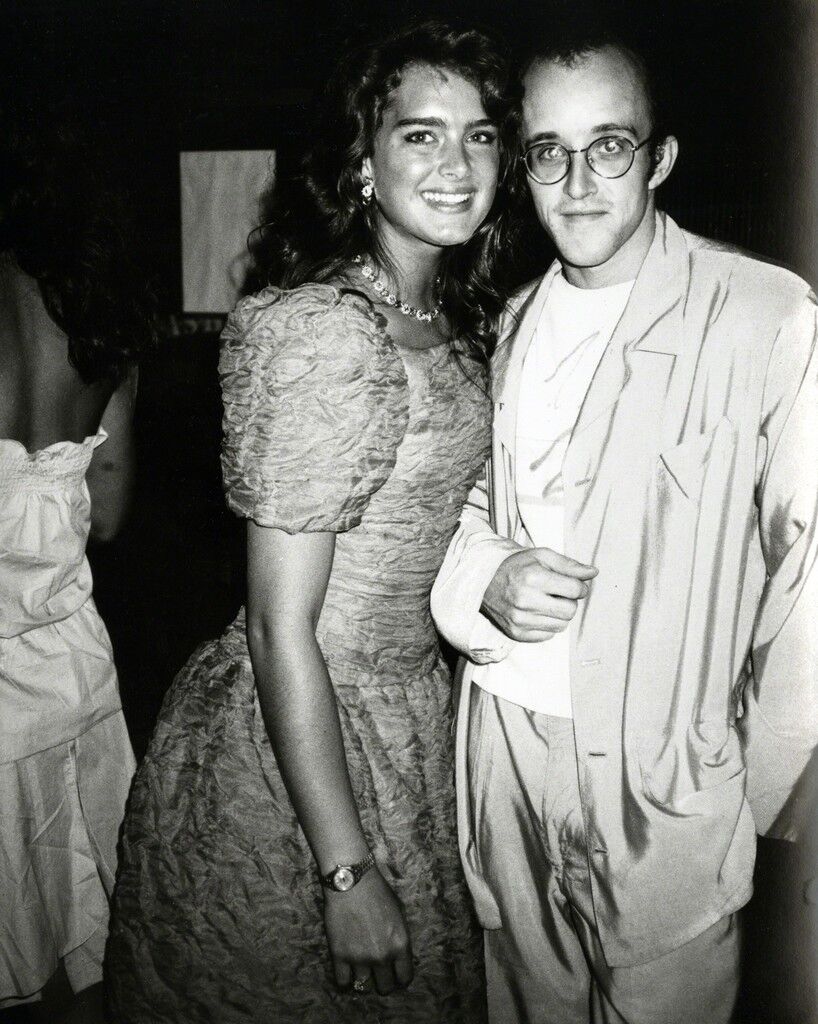 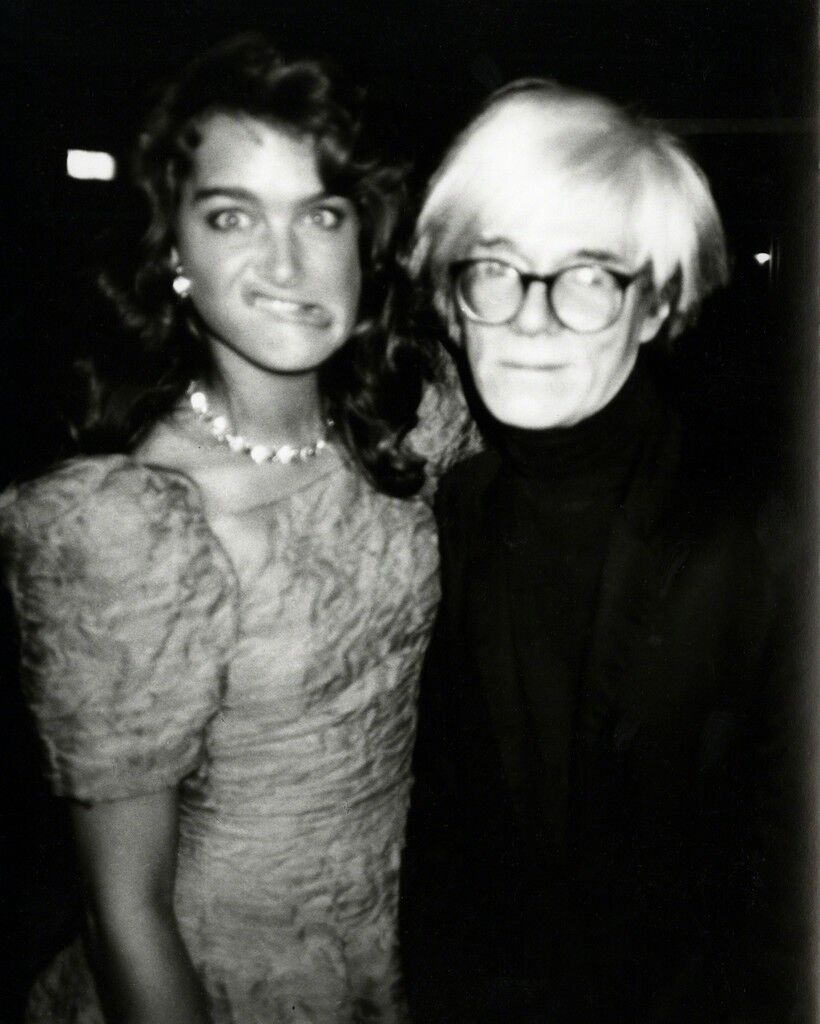 Andy Warhol
Andy…
Hedges Projects
Fischl so enjoyed working with Shields that after he gave her the agreed-upon collage, he used her image for a painting. (The likeness might not jump out at viewers: “The way I paint, no one recognizes her anyway,” he said.) For Daddy’s Gone, Girl (2016), he rendered Shields in a filmy black dress, legs immersed in a swimming pool, glass of liquor by her side. A black dog floats toward her. Her face is splotched and white, her hair badly dyed—without knowing what you were looking at, you’d never guess that Brooke Shields modeled for the picture. “It’s early for drinking and wearing that dress,” said Fischl about the unsettling scene. A sense of vague recognition—Don’t you know that woman from somewhere?—contributes to this unease.
“It felt very much like a collaboration,” Shields told me, by phone, about the process of working with Fischl. She felt freer when she was playing different characters than she would have been simply posing as herself.
This Tuesday, October 9th, Shields and Fischl will reunite to celebrate artistic muses at the New York Academy of Art’s “Take Home a Nude” art party and auction. Shields has long been a muse for major artists: She was friends with
Andy Warhol
, and she recalled how he’d follow her around parties, taking candid pictures of her from varying angles, often not even looking through the lens. “Any time you had his attention, it was always very sweet and funny,” she said. “He was extremely celebrated, but he was also very personally sweet and pretty shy. So I would make faces or do something to make him laugh.”
In Shields’s estimation, the best collaborations between artist and muse occur when they aren’t pre-planned: “If you set out to make money, or create a stir, or sell as much as some other photograph that you did,” she said, “I think by virtue of that fact, I don’t think it can happen.” In contrast, she believes her work with Fischl was so fruitful because the pair went into it without fixed expectations. 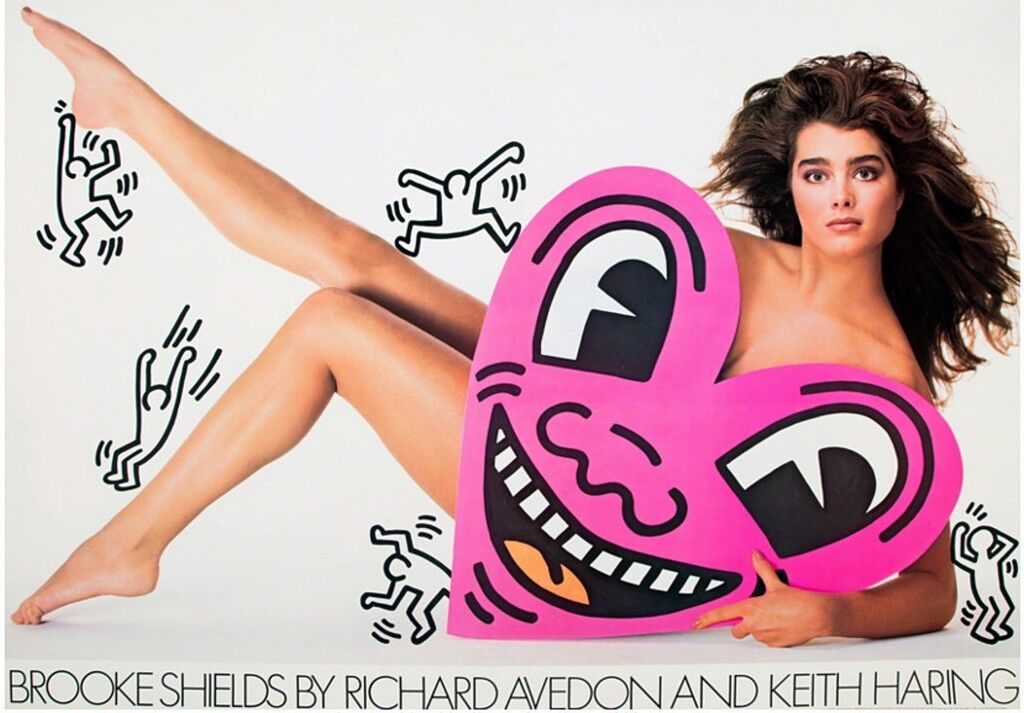 Keith Haring, Richard Avedon
Brooke Shields, 1985
Alpha 137 Gallery
That said, the life of a muse is not always easy or uncomplicated. When
Richard Avedon
and
Keith Haring
decided to team up to create posters in 1985, they chose Shields as their subject. Haring created a series of sculptural hearts with cartoon faces, behind which Shields posed and reclined—in the final images, she looks as though she’s only wearing the heart. She believes that Avedon was trying to recreate the wild success of a racy poster he’d previously made (entitled Nastassja Kinski and the Serpent, 1981), depicting a boa constrictor wrapped around the nude body of the titular actress.
“I don’t know if it did as well as he thought,” Shields said. That’s something of an understatement. The day of the photo shoot, she had an eye infection, and the team poorly airbrushed her swollen eye in the retouching process. Additionally, the producer insisted on attaching a tacky tagline to the image: something along the lines of “Brooke, with a heart-on for Keith Haring,” as she recalled. “My mother lost her mind,” Shields said. They refused to sign any releases until the producer nixed the terrible pun.
Even more notorious was Shields’s earliest role as a muse—an entirely unwitting one. In 1983,
Richard Prince
re-photographed a leaked nude childhood photograph of her for his work Spiritual America. A photographer, Gary Gross, had taken the picture in 1975, for Playboy Press’s 1976 Sugar & Spice: Surprising and Sensuous Images of Women, when she was 10 years old. Once Shields became famous, Gross attempted to republish the images on posters, and Shields’s mother sued. The resulting legal battle made headlines, capturing national attention. “This was a ‘complicated’ photograph,” Prince wrote. “This no longer had anything to do with money or censorship or even embarrassment. For me this photograph had to do with the medium and how the medium can get out of hand.”
In 2005, for another series, Prince hired
Sante d’Orazio
to photograph the adult Shields in a bikini, alongside a motorcycle—restaging the Gross image while giving the subject more agency. “It was my way of finishing a chapter,” Shields told me, “coming out on top, and owning the experience.”
Alina Cohen is a Staff Writer at Artsy.
Related Stories 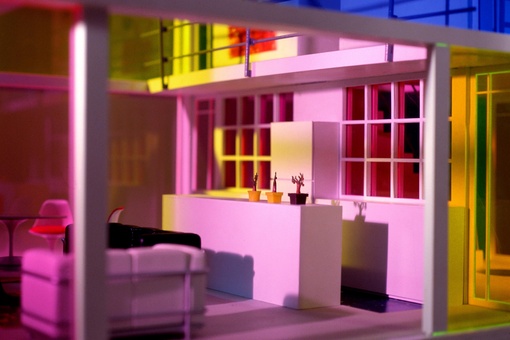 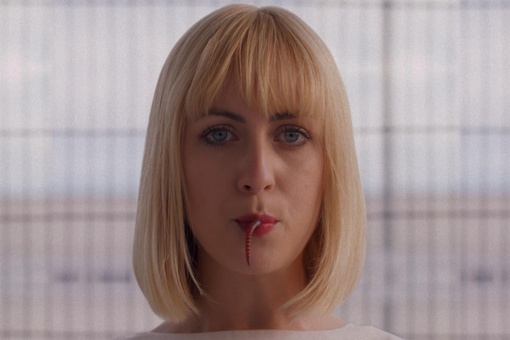 Marianna Simnett’s Brilliantly Grotesque Videos Are Not for the Faint of Heart
Scott Indrisek
Oct 8, 2018 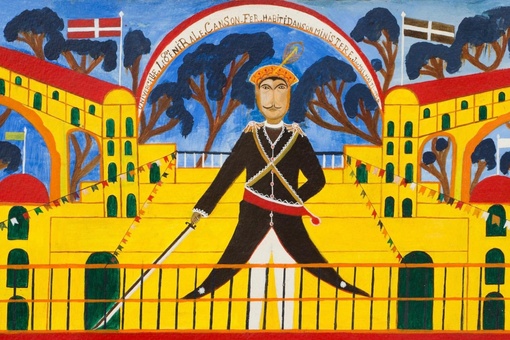 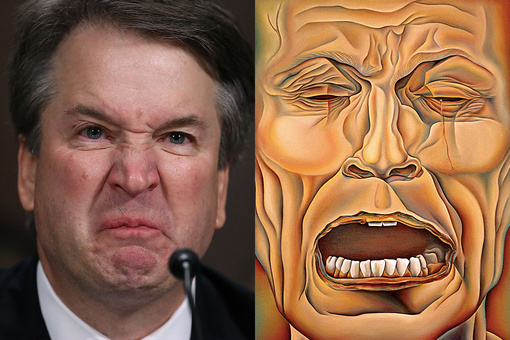