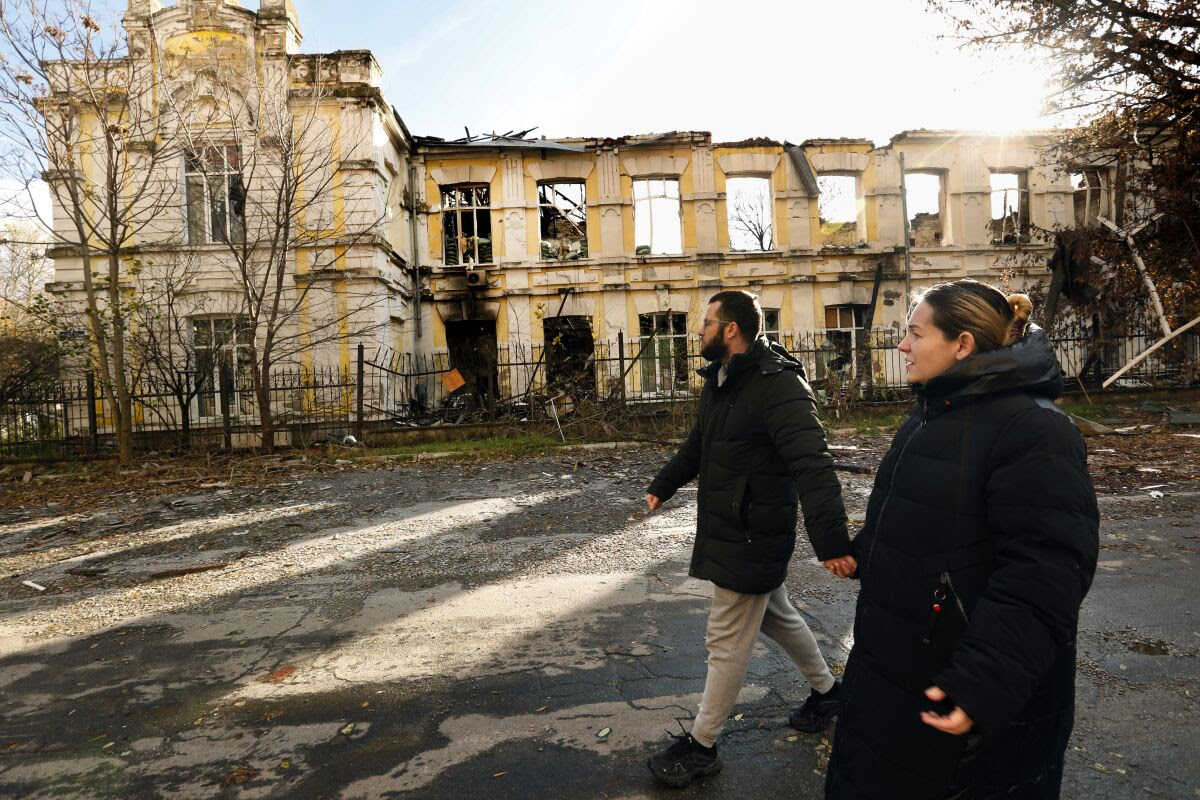 Viacheslav Slavov and Ludmila Taranov, both 31, met one month before the war began. They remained in Kherson during the Russian occupatio. (Carolyn Cole / Los Angeles Times)

“I’m not going without you.” Ukrainian lovers defy the rules of war. Amid the nightmare of war in Ukraine, a coffee date between Ludmila Taranov and Viacheslav Slavov led to love, cohabitation and a baby girl who’s due in January.

Several weeks before Russian troops captured the provincial capital of Kherson, Ludmila Taranov was scrolling through an online dating site, looking for someone to have coffee with — someone to take her mind off her troubles.

Taranov, 31, was teaching disabled children at a public school, and, with a master’s degree in English and Russian, she also taught English on the side. Divorced, she lived with her mother, her sister and brother-in-law, and their infant son. When she wasn’t at school, she was taking care of her mother, who’d been ill.

Taranov needed to get out of the house.

“I like sports,” she’d written in her profile. “I’m active, and I work out a lot. If you’re OK with that, maybe we can meet for coffee.” She posed at the gym for profile photos in black tights and top; her makeup and long blond hair were immaculate.

She’d been looking at one particular dating profile for four years. His pictures weren’t very good, Taranov said, but she eventually decided it was time to reach out. He called soon after to invite her on a coffee date.

Viacheslav Slavov — or Slava — remembers the first time they spoke on the phone, mostly because Taranov seemed to be more interested in the computer game that appeared in one of his profile photos than she was in him. He’d never met a woman who was as into e-gaming as he was, and — jokingly — he asked her to marry him.

A few days later, on Jan. 18, they met for coffee, “and that was it,” Taranov said, adding, “He was much better looking in person.”

Then the Russians arrived.

Troops and tanks started to pour into Kherson at the end of February, crossing the Dnieper River to capture the first major Ukrainian city in the war. When they rolled into Taranov’s neighborhood, the rumble reached a crescendo when four of the tanks stopped in front of her house.

Her 43-year-old sister, Elena, was upstairs holding her baby and watching out the window when a gun turret slowly started to turn toward their home.

“They pointed the tank guns at the window,” Taranov said. “The first time I saw that, I started to cry. When you see the enemy’s guns on you for the first time, you can’t control yourself.”

Her mother, Larisa Taranov, has had plenty of experience with living in challenging circumstances. Her husband is often away at sea, working as a mechanic on cargo ships for long stretches of time, and she has, in essence, raised her daughters on her own. But the invasion went way beyond challenging; it was “terrifying.”

Their large, six-bedroom house, made possible by her husband’s long stints at sea, was almost finished when the war broke out— just the kind of place Russian officers would like to occupy. But Taranov said her 63-year-old mother was not about to let that happen. Larisa transformed herself into a sentry with a broom, sweeping in front each day to make sure they knew the house was occupied, and the officers took over an empty house two doors down instead.

The Taranovs’ large basement — designed as a rec room — became a bomb shelter at the start of the war. There is no running water or electricity. The bathroom next to the kitchen on the first floor is filled with buckets of water, some for flushing the toilet, some for bathing, some filled with drinking water.

The windows throughout the house, covered in black plastic, are double-paned to keep out the long, cold winters, but Taranov said even those couldn’t keep out the smell of burning bodies during the Russian occupation.

A showcase for compelling storytelling from the Los Angeles Times.

“I stayed home most of the time,” Taranov said. “I was afraid they would punch me in the stomach. They hit people just because they didn’t understand the questions.”

The outside world was depressing. “I tried to go out only to get food,” Taranov said. “When you saw a Russian soldier, you are shaking inside.”

The Ukrainians on the street were older, and children stayed home. “It was like 10 years passed” in 10 months, she said.

At the start of the war, when it was still possible to leave, many of Taranov’s friends fled elsewhere in Europe. Slava wanted to leave as well.

“I told him he could go,” Taranov said, but she was staying.

Slava was quick to react. “Are you insane?” he asked. “I’m not going without you.”

During the first couple of months of their relationship, it was difficult to meet in person with Russian troops patrolling the streets. They strip-searched the men, Slava said, looking for signs of Ukrainian military service, questioning them repeatedly: Why do you have long hair? Why do you have a beard?

“If they didn’t like your answers, they’d put you in detention,” he said.

Every time he left her home, Taranov wondered if he’d be coming back.

Slava, who is also 31, was living in a less affluent area of Kherson where Russian was the predominant language. He said that the local policemen fled when the Russians arrived, so he helped organize a civil defense group in his neighborhood. About 230 men took turns patrolling the area and answering a temporary hotline.

Slava was familiar with law enforcement; he’d been a policeman before going into online gaming. But, with a master’s degree in computer science, Slava saw a brighter future in tech, and Taranov plans to join him in his e-gaming business.

After the war started, his sister left for Poland and was seeking asylum in Canada. He never really knew his father, and his mother was staying with friends in Estonia. But now he had Taranov, and the large house — with the thick windows, the bathroom filled with buckets of water, and the Russians down the street — became his home as well.

Taranov’s mother took to Slava right away, and it was quickly apparent that when it comes to talking to Larisa, he had an easier time than Taranov did. He even tried to open her eyes to the atrocities committed by Russian troops.

And Larisa “didn’t believe the news about Bucha,” a town under Russian occupation where hundreds of people were massacred early in the war.

The Russians cut off all Ukrainian cellphone service and “forced us to get Russian phone numbers. I used my dead grandmother’s ID to get a Russian SIM card,” Taranov said. “That way they wouldn’t know my name.”

But Slava had connections to get an encrypted internet line through his business, and they were soon seeing the news reported from a Ukrainian perspective. Nonetheless, it took more than six months to convince Larisa that Russian troops were committing atrocities.

“The Russians were saying it was all fake, that nothing happened there, just actors and Ukrainian journalists making it up,” Taranov said. “She changed her mind when she saw what happened in Kherson. She realized everything that happened in Bucha was true.”

It’s tough to make plans in a war zone, but Taranov dreams of starting an art therapy program for children. “I used to teach children with learning disabilities,” she said. “I think a lot of children have been affected by the war. I want to open an art gallery for them.”

In the meantime, she and Slava are expecting a child of their own, whom they will name Mary.

“I’m lucky I didn’t get pregnant sooner,” Taranov said. “The Russians forced all [newborns] to be Russian citizens.”

“We didn’t want to be a Russian couple,” so they didn’t get married under the Russian occupation, “but we will as soon as the Ukrainian government offices reopen in Kherson.”

That may be awhile; the Russians, who withdrew from Kherson last month, have started to bomb the city from across the Dnieper River. There were “more than 50 bombings already today,” Taranov said in a recent text. “They bomb different neighborhoods. Already, 10 people are dead and seven are injured, including kids.”

She felt the baby kicking while she was making tea. “I try to stay as calm as possible, even if there is street fighting going on,” she said, adding: “We can’t leave now with the bumpy roads, and mines. It’s not safe for the baby.”

But after a month of constant bombing in Kherson, Taranov says she and Slava will leave for Kyiv immediately. Mary is due in January, and Taranov was advised that there are no good doctors left in the city for the delivery.

“We remain optimistic and are making plans for the future,” Taranov said. “I just hope my baby will not face war.”

Carolyn Cole is a staff photographer for the Los Angeles Times. Her coverage of the civil crisis in Liberia won the 2004 Pulitzer Prize for feature photography. Cole has been named U.S. newspaper photographer of the year three times. Cole grew up in California and Virginia, before attending the University of Texas, where she earned a bachelor’s degree in journalism. She went on to earn a master of art’s degree from Ohio University.