And now we wait? Seven works that perfectly depict the US election limbo 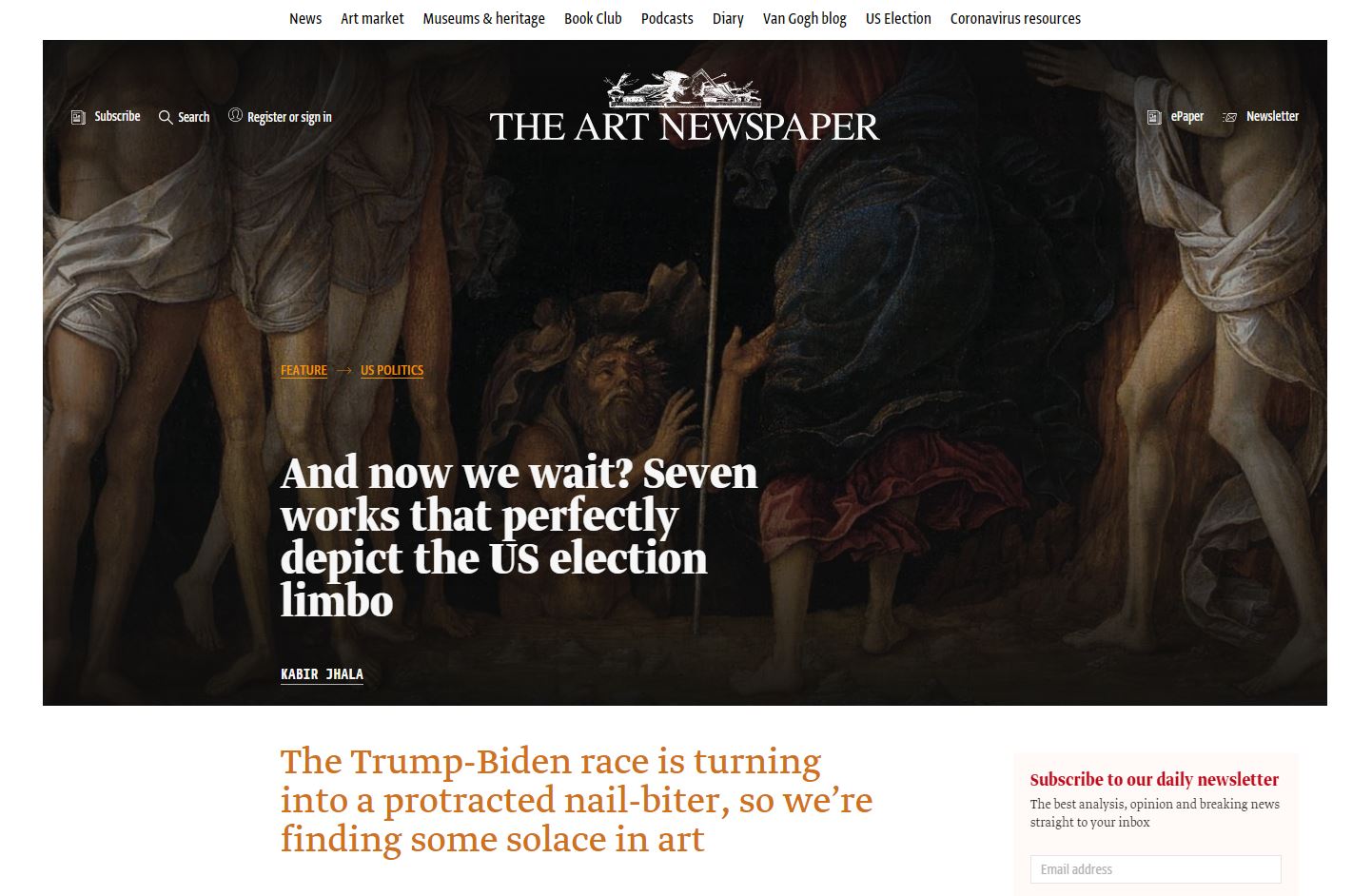 And now we wait? Seven works that perfectly depict the US election limbo

The Trump-Biden race is turning into a protracted nail-biter, so we’re finding some solace in art

This year has already felt like an eternity. But with conclusive results yet to emerge from last night's elections, the world must brace itself for what looks like a long wait to find out if Donald Trump or Joe Biden will be the next US president.

To offer some food for thought as we await judgement day, we have gathered some of art history's most pertinent depictions of states of limbo. From nightmarish scenes of Purgatory to endless durational performances, we hope these works serve as an apt reminder that even the most polarising of 21st-century political battles can still echo truly timeless sentiments. 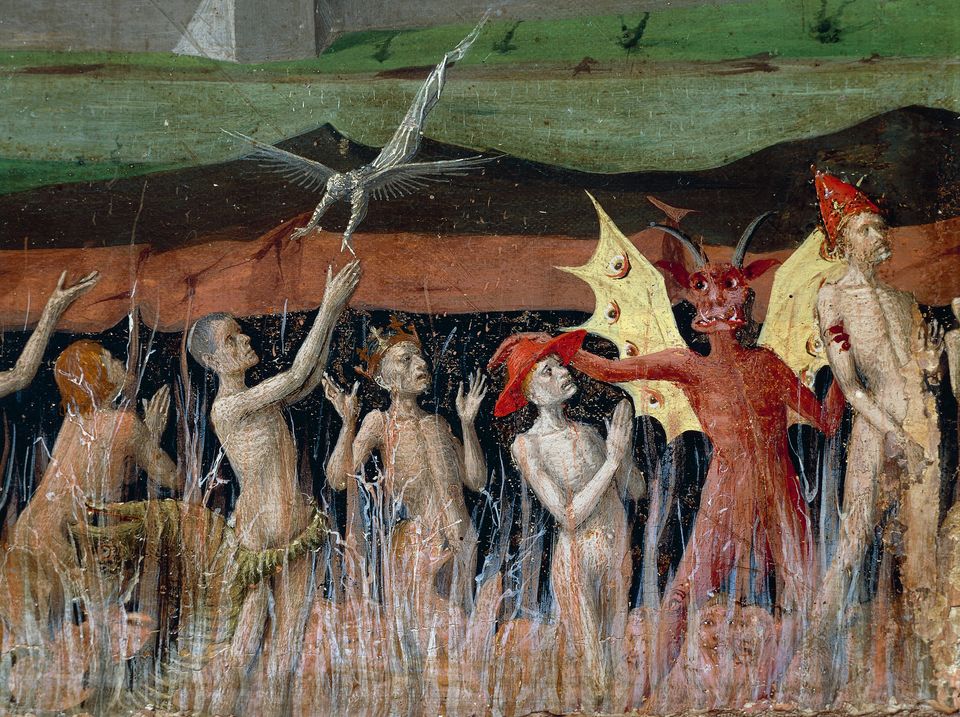 This detail from The Coronation of the Virgin (1454), an altarpiece by Enguerrand Quarton, shows figures tormented by the flames of Purgatory—a place, in Catholic doctrine, where those who are neither wholly bad nor good are sent after death. With their fates yet to be decided, these poor souls might either be saved by the angels from above or descend into the fiery depths of hell. The decision is ultimately that of God. Or as it now stands, undecided voters in Pennsylvania. 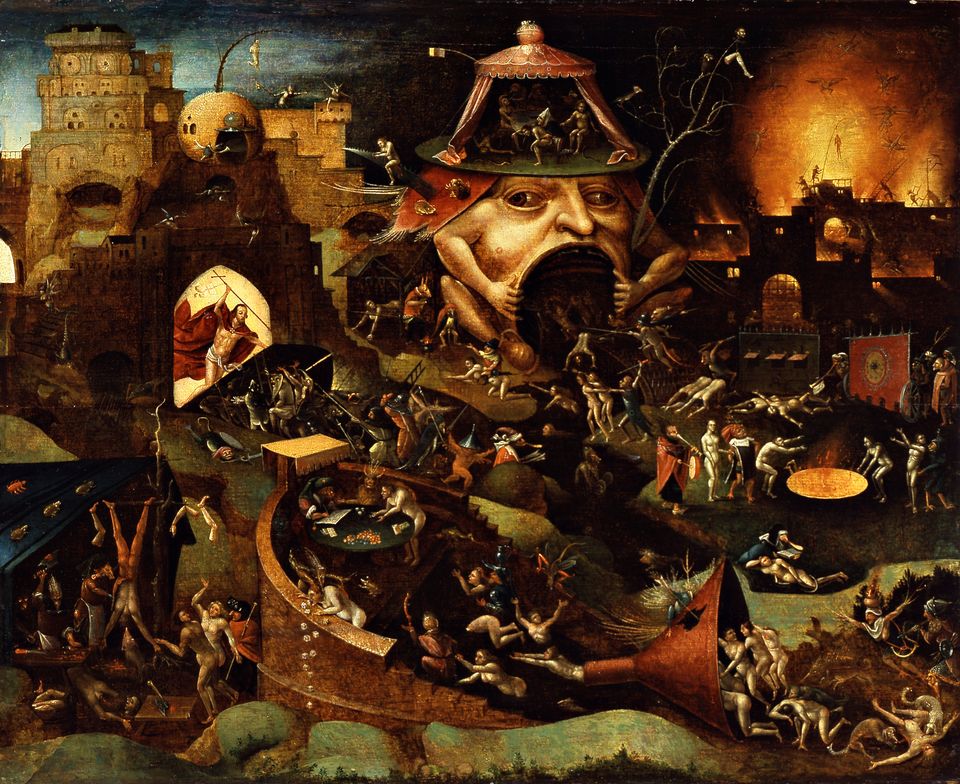 Christ in Limbo, follower of Hieronymous Bosch (around 1575)

Perhaps Purgatory's most famous depiction is also the most relevant to our current moment. Not only is this macabre scene by a follower of Hieronymous Bosch filled with a palpable state of anguish, it also features a demonic, orange-tinged figure in the work's upper section whose gaping, bellowing mouth draws comparisons to another source of many nightmares. 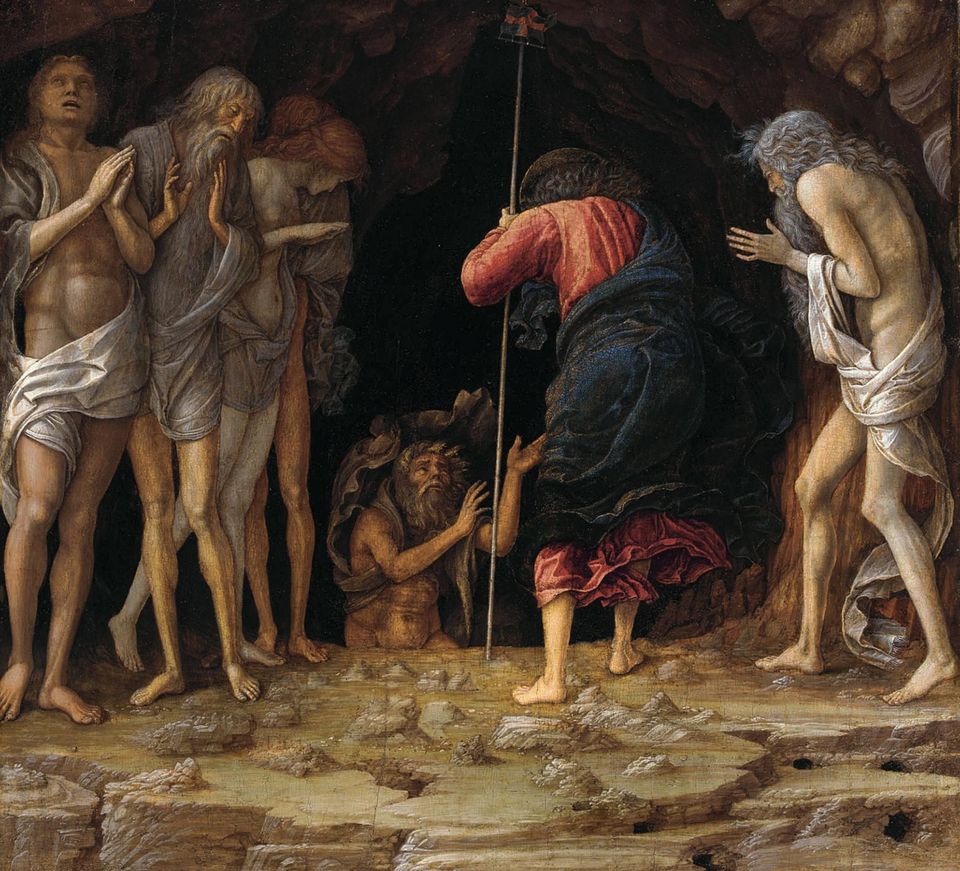 "Please, no more!" a weakened Christ seems to plead in Mantegna's 1492 tempera-and-gold on panel work, depicting the son of God descending into limbo. His wearied face echoes many of ours this morning, ravaged by a night of frantic CNN live coverage and ill-advised Twitter doomscrolling. 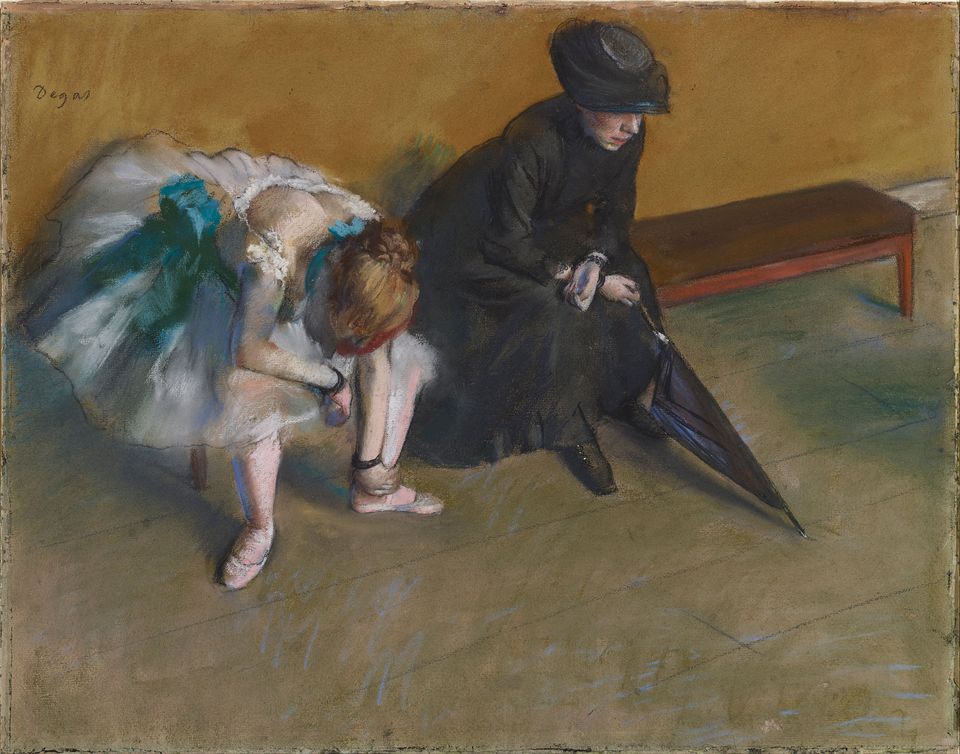 With previous US presidential elections having taken over five weeks to decide, it is more likely than not that this month will be a long waiting game. This is no better depicted than in Degas's pastel-on-paper work Waiting (1880-82), which shows a ballerina racked with anticipation, about to take to the stage. 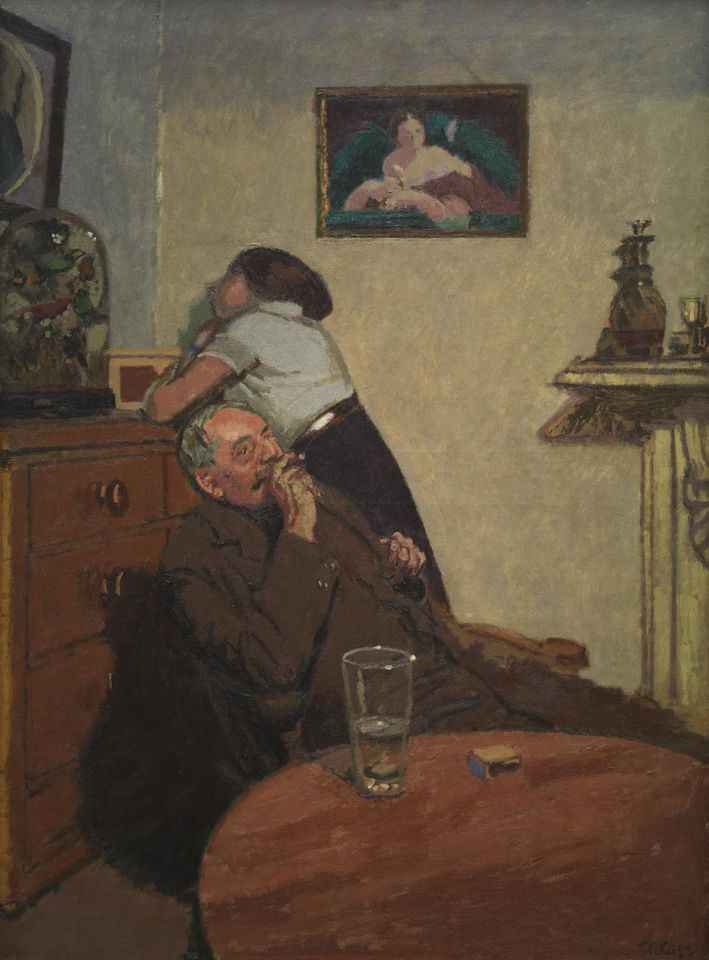 If 2020 has taught us one thing, it is that even during tumultuous times, it is possible to feel very, very bored and few works capture a sense of general malaise better than Walter Richard Strickert's Ennui (around 1914). A year of mass protests, ecological catastrophe and of course, a global pandemic, has also involved a lot of sitting around and doing nothing. Indeed, with second lockdowns soon to be imposed across Europe, the next month might involve a great deal of staring into space and sighing. 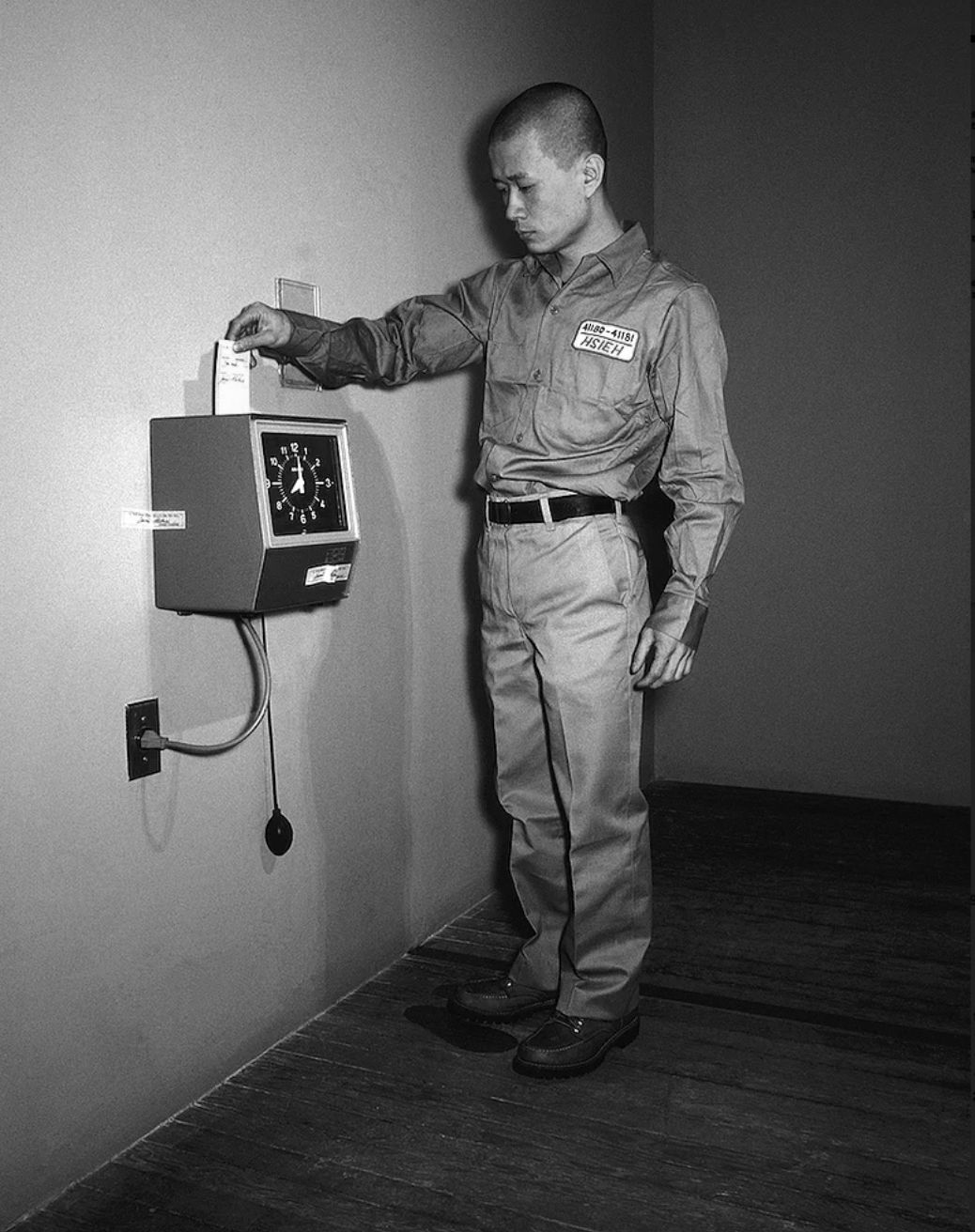 For our collective sanity, we pray a definite result arrives within a week. But just in case, one might take a leaf out of Tehching Hsieh's book. His durational performance work One Year Performance (1980-81) saw him punch a time clock every hour on the hour for a period of one year. Hsieh then compiled a six-minute film animation from pictures taken periodically with a 16mm movie camera. Patience is a virtue practised to perfection here. Let's just hope it doesn't come to that. Finally, who said a state of limbo had to be boring? This year has proved that being trapped in confinement will not stop the world from imploding around you. Indeed, the craziest things happen in states of limbo. Case in point—a visitor to a 2018 Anish Kapoor exhibition in Portugal was hospitalised after falling inside Descent into Limbo (1992), one of the British artist’s installations, which features a 2.5-metre-deep hole. The work was coated in a dense black pigment giving the illusion of a depthless void. Another few months more of this and we might be tempted to jump into one too.

The 2020 US election: what it means for the arts

The 2020 US election: what it means for the arts

Three exhibitions to see in London this weekend

Three exhibitions to see in London this weekend

Exclusive survey: how small US galleries are surviving the coronavirus crisis as Trump tables relief plans

Exclusive survey: how small US galleries are surviving the coronavirus crisis as Trump tables relief plans

An AI bot has figured out how to draw like Banksy. And it's uncanny

An AI bot has figured out how to draw like Banksy. And it's uncanny

Subscribe to The Art Newspaper’s digital newsletter for your daily digest of essential news, views and analysis from the international art world delivered directly to your inbox.

Find out how The Art Newspaper’s content platforms can help you reach an informed, influential body of collectors, cultural and creative professionals. For more information, contact info@theartnewspaper.com.