Why the Donald is dangerous

Why the Donald is dangerous 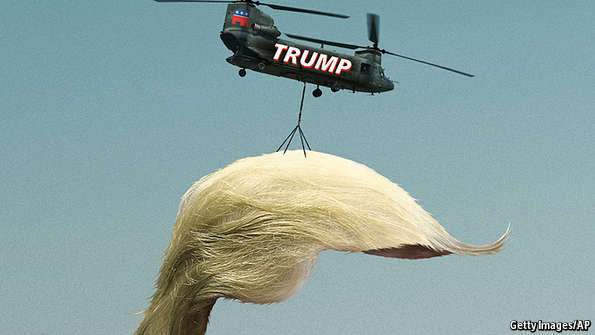 “THIS country is a hellhole. We are going down fast,” says Donald Trump. “We can’t do anything right. We’re a laughing-stock all over the world. The American dream is dead.” It is a dismal prospect, but fear not: a solution is at hand. “I went to the Wharton School of Business. I’m, like, a really smart person,” says Mr Trump. “It’s very possible”, he once boasted, “that I could be the first presidential candidate to run and make money on it.”
When Mr Trump first announced that he was running for president, he was dismissed as a joke. A wheeler-dealer with lots of experience of reality TV but none whatsoever of elective office wants to be commander-in-chief? Surely, sophisticates scoffed, no one could want this erratic tycoon’s fingers anywhere near the nuclear button. But for weeks now he has led the polls for the Republican nomination, despite saying things that would have torpedoed any normal campaign. Americans are waking up to the possibility that a man whose hobby is naming things after himself might—conceivably—be the nominee of the party of Lincoln and Reagan. It is worth spelling out why that would be a terrible thing. Fortunately, the Donald’s own words provide a useful guide.

Mr Trump is not in thrall to the hobgoblins of consistency. On abortion, he has said both “I’m very pro-choice” and “I’m pro-life”. On guns, he has said “Look, there’s nothing I like better than nobody has them” and “[I] fully support and back up the Second Amendment” (which guarantees the right to bear arms). He used to say he wanted a single-payer health service. Now he is much vaguer, promising only to replace Obamacare with “something terrific”. In 2000 he sought the presidential nomination of the Reform Party. A decade ago he said “I probably identify more as Democrat.” Now he is a Republican.

Blowing his own Trumpet
In an interview this week (see article) The Economist asked Mr Trump why Republican voters seem willing to give him a pass on so many issues they normally hold dear. He took this to be a question about religion, since he is not much of a churchgoer and struggles to cite a single verse from Scripture. “I’m strongly into the Bible, I’m strongly into God and religion,” he declared. But within a few seconds he appeared to grow bored with the topic and switched to talking about how he has “a net worth of much more than $10 billion” and “some of the greatest assets in the world”, including the Trump Tower, the Trump Turnberry golf resort, and so on.
On one domestic issue, to be fair, he has staked out a clear, bold position. Alas, it is an odious one. He wants to build a wall on the Mexican border and somehow make Mexico pay for it. He would deport all 11m immigrants currently thought to be in America illegally. Apart from the misery this would cause, it would also cost $285 billion, by one estimate—roughly $900 in new taxes for every man, woman and child left in Mr Trump’s America. This is necessary, he argues, because Mexican illegal immigrants are “bringing drugs. They’re bringing crime. They’re rapists.” Not only would he round them all up; he would also round up and expel their children who were born on American soil and are therefore American citizens. That this would be illegal does not bother him.
His approach to foreign affairs is equally crude. He would crush Islamic State and send American troops to “take the oil”. He would “Make America great again”, both militarily and economically, by being a better negotiator than all the “dummies” who represent the country today. Leave aside, for a moment, the vanity of a man who thinks that geopolitics is no harder than selling property. Ignore his constant reminders that he wrote “The Art of the Deal”, which he falsely claims is “the number-one-selling business book of all time”. Instead, pay attention to the paranoia of his worldview. “[E]very single country that does business with us” is ripping America off, he says. “The money [China] took out of the United States is the greatest theft in the history of our country.” He is referring to the fact that Americans sometimes buy Chinese products. He blames currency manipulation by Beijing, and would slap tariffs on many imported goods. He would also, in some unspecified way, rethink how America protects allies such as South Korea and Japan, because “if we step back they will protect themselves very well. Remember when Japan used to beat China routinely in wars?”

Towering populism
Mr Trump’s secret sauce has two spices. First, he has a genius for self-promotion, unmoored from reality (“I play to people’s fantasies. I call it truthful hyperbole,” he once said). Second, he says things that no politician would, so people think he is not a politician. Sticklers for politeness might object when he calls someone a “fat pig” or suggests that a challenging female interviewer has “blood coming out of her wherever”. His supporters, however, think his boorishness is a sign of authenticity—of a leader who can channel the rage of those who feel betrayed by the elite or left behind by social change. It turns out that there are tens of millions of such people in America. 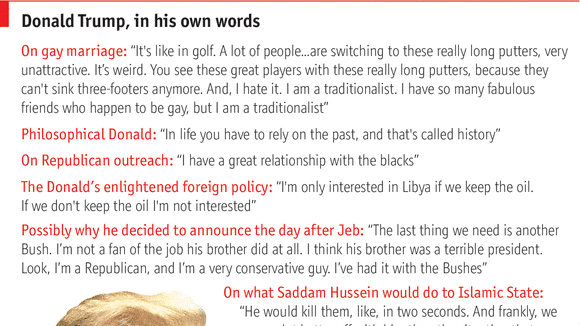 Wisdom from The Donald: What might we expect from a President Trump?

The country has flirted with populists in the past, but none has won a major-party presidential nomination since William Jennings Bryan in 1908. The closest any true firebrand has come was in 1996, when Pat Buchanan, whose slogan was “The peasants are coming with pitchforks”, won the Republican primary in New Hampshire against a dull establishment candidate, Bob Dole. (Mr Dole later won the nomination.)
Mr Trump is far more dangerous than Pitchfork Pat, for two reasons. First, as a billionaire, he will not run out of money to finance his campaign. Second, he faces so many Republican opponents that he could grab the nomination with only a modest plurality of the vote. The smart money still says that Republicans will eventually unite behind a mainstream candidate, as they always have in the past. But the world cannot take this for granted. Demagogues in other countries sometimes win elections, and there is no compelling reason why America should always be immune. Republicans should listen carefully to Mr Trump, and vote for someone else.

From the print edition: Leaders

Wisdom from The Donald

Jun 16th 2015, 16:57 by M.D. & THE DATA TEAM
HARD as it may be to believe, Donald Trump’s announcement on June 16th that he is running for president as a Republican is the first time that the property tycoon and media bon vivant has launched an official campaign. Mr Trump has flirted with making a bid for the White House on several occasions in the past, notably in the 2012 election. At the time he strongly aligned himself with the “Birther” wing of the party, causing a stir by continually pushing the issue when even the most ardent doubters had accepted that, yes, Barack Obama was born in America. He decided not to join the race officially in May 2011, but said he still had a “strong conviction” that he could win the nomination. A poll in April 2011 showed him leading the Republican field. So what might we expect from a President Trump? We think the quotes speak for themselves. 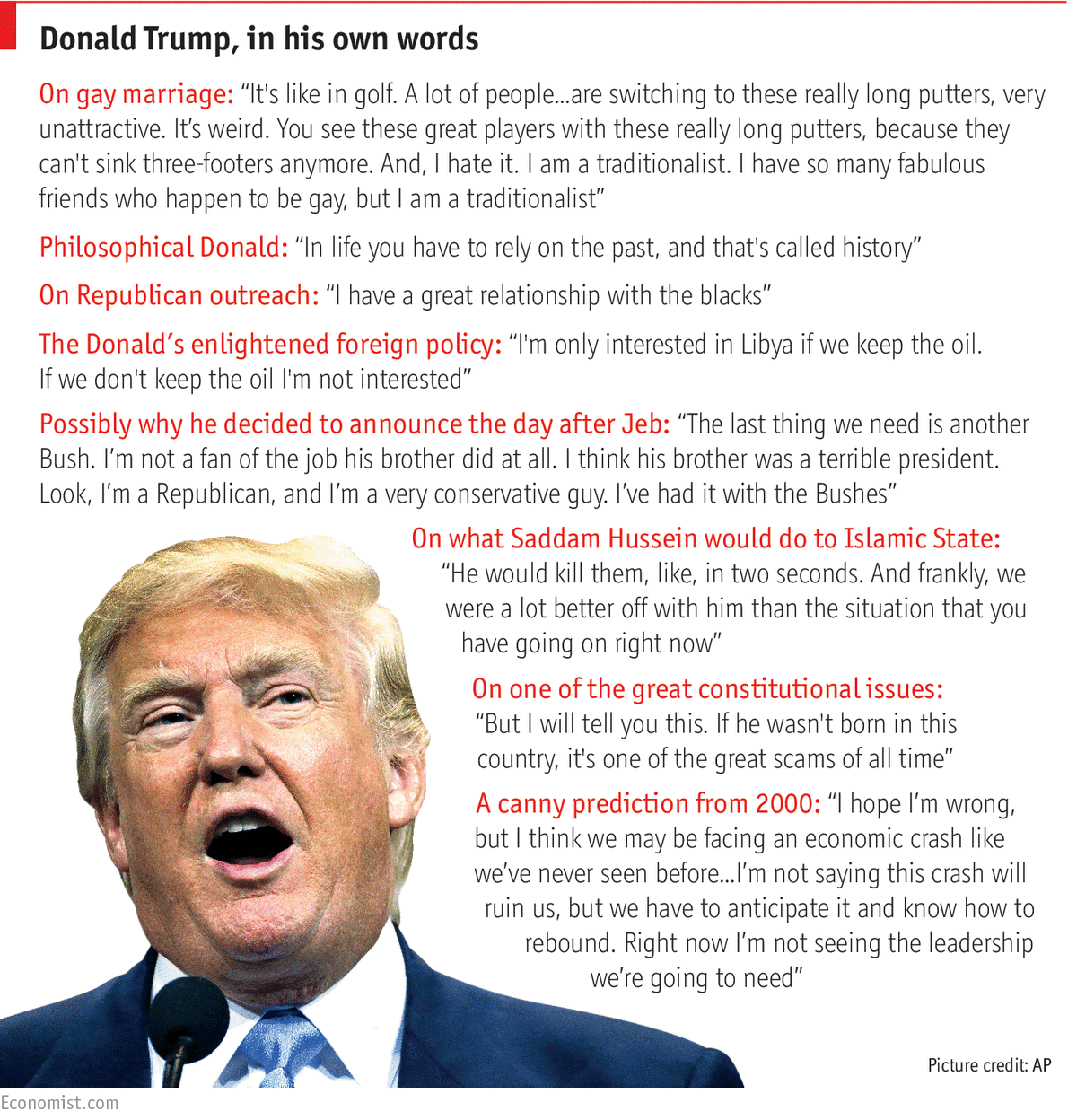 Cards on the table

Sep 3rd 2015, 16:00 by The Economist
DONALD TRUMP has become the surprise Republican frontrunner early on in the 2016 US presidential cycle. His popularity – and fame – is reflected in the wide media coverage he has been enjoying. His policies, such as they are, have had less attention

‘In Love With’ by Peter Lindbergh for Vogue Italia September 2015