Estimated Reading Time: 3 minutes
•
Hazy summer days call for long, relaxing trips to sandy shores. If you’re like us, you’re constantly looking for suggestions to fill your summer reading list. Here are our editors’ top picks for the best books for art lovers this season.

“The Last Painting of Sara de Vos” by Dominic Smith

In short: this novel follows a painting and its forgery through three different time periods.
Tell me more: Smith’s fictionalized title character, a female Dutch painter in the 1600s, copes with the loss of her child by painting “At the Edge of the Wood.” Three hundred years later, the work is copied by an expert forger and placed in the home of Marty de Groot, the owner of the original. Forty years after that, the forger-turned-renowned-art-historian, Eleanor Shipley, is in the process of reuniting the two versions while de Groot attempts to finally confront her.

“An Artist of the Floating World” by Kazuo Ishiguro

In short: A character study of a Japanese artist and his family in the aftermath of World War II.
Tell me more: Masuji Ono made a living making imperialistic artworks for Japan, but after WWII devastated the country, he is left to come to terms with the way the world, and his daughters, view his contribution to the destruction. The book offers depth of view for those interested in the way art and artists change after catastrophic events.

“The Painter from Shanghai” by Jennifer Cody Epstein

In short: A fictionalized exploration of the life of Pan Yuliang, one of the most well-known Chinese artists in the 20th century.
Tell me more: Epstein writes eloquently about popular Chinese painter Pan Yuliang. After being orphaned and sold into prostitution, she becomes a controversial painter in China while the country stands on the brink of enormous change. When she enrolls in the Shanghai Art Academy and travels to Europe, Yuliang is criticized for adopting Western culture, but fights for her artistic ambition.

“The Passion of Artemisia” by Susan Vreeland

In short: This book examines the younger years of Artemisia Gentileschi, one of the few acclaimed female artists of the Baroque period.
Tell me more: Vreeland begins her novel when the artist is a teenager. Gentileschi faced humiliation and family struggle before rising to fame during her lifetime, an almost unheard-of feat for women of the time. Gentileschi is of increasing interest to art historians, so this book is a treat for those who are intrigued by her work and her epic life.

In short: A fruitful depiction of the environment out of which emerged one of Claude Monet’s most famous series, “Water Lilies.”
Tell me more: This book gives context to Monet’s later works, done as Picasso and Matisse were rising in prominence across a war-torn Europe. Monet, suffering from the loss of his second wife and eldest son, as well as from cataracts, began painting his most ambitious works. This is truly an art historical read, giving context to the images so ubiquitous in our collective cultural memory.

“The Art of Rivalry” by Sebastian Smee

In short: The real-life stories behind art-world frenemies.
Tell me more: In this book, Pulitzer Prize-winning art critic Sebastian Smee analyzes the fraught relationships between these pairs of giant artists: Manet and Degas, Picasso and Matisse, Pollock and de Kooning, and Freud and Bacon.

In short: Legendary musician and artist Patti Smith details her friendship with the late photographer Robert Mapplethorpe.
Tell me more: An art-world phenom in her own right, Patti Smith shared an apartment in New York City with world-renowned artist Robert Mapplethorpe before either of them made it big. Her memoir chronicles their personal relationship and gives a thoughtful glimpse into the lives of two larger-than-life celebrities. If you haven’t yet read this immensely popular book, it should be on the top of your list.

“The Lady in Gold” by Anne-Marie O’Connor

In short: A best-seller-turned-feature-film that tells the story of Gustav Klimt’s “Portrait of Adele Bloch-Bauer,” which was at the center of a massive legal case after it was looted by the Nazis during World War II.
Tell me more: O’Connor’s book is full of rich history. She follows the lives of Klimt, the Bloch-Bauers, and their relatives from the turn of the century through to the present day. For those interested in repatriation and art law, this book details one of the most important international art cases of all time. The second half of the book chronicles Adele Bloch-Bauer’s niece, Maria Altmann, as she attempts to reclaim her family’s stolen treasure from the Austrian government.

In short: A well-researched history that fleshes out the woman behind John Singer Sargent’s famous (and at the time scandalous) portrait entitled “Madame X.”
Tell me more: Sargent painted a young Paris socialite named Virginie Amélie Gautreau in one of his most famous works. When it was unveiled, Gautreau faced backlash for being suggestively portrayed with one strap of her dress hanging off her shoulder. The book was written using previously unexamined documents, creating a three-dimensional story of celebrity in the 19th century. 12 Enviable Excursions Around the Art World The Art Collector’s Guide to Sydney For Jean with Love: Friends & Celebrities in The World of Jean Stein 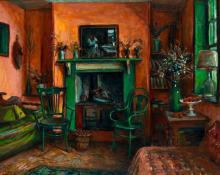