What It Takes to Build a $100 Million Art Collection

Keynes Could Have Made £100m on his Art in the Long Run: John Maynard Keynes was famous for saying, "In the long run we're all dead." That was in response to the equanimity some economists expressed in the face of short-term crises. Keynes was more than an economist, though. He was an investor and, it turns out, an art collector. Jason Zweig, the Wall Street Journal's investing columnist, wrote about an academic paper on Keynes's art collection a few months ago. Like most collections, the lasting monetary value of his collection which included works by Paul Cézanne, Georges Seurat and Pablo Picasso. "Of the 135 works in Keynes’s collection," Zweig writes, "two account for more than half its total value and 10 constitute 91%." 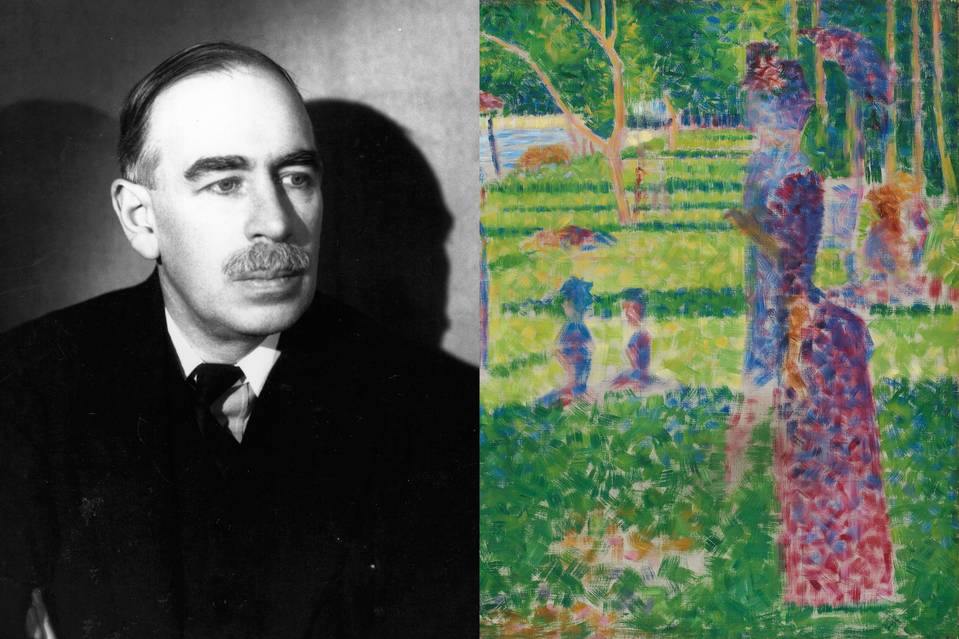 By
Jason Zweig
Mar 30, 2018 1:49 pm ET
23 COMMENTS
A hundred years ago this week, the most influential economist of the 20th century began assembling what became one of the best collections of modern art then in private hands.
Every investor hoping to diversify a conventional portfolio with nontraditional assets can learn from the collecting career of John Maynard Keynes (1883-1946).
Wealthy investors often say they keep about a tenth of their net worth in art, antiques, fine wines and other collectibles. Research has suggested that the returns on such assets may beat cash, bonds and even gold over the long term, although the costs of trading — and holding — them can significantly reduce net results.
The returns on so-called emotional assets aren’t directly comparable to those on financial assets: Dealers, auction houses and private transactions can price the same work of art at drastically divergent prices. Commissions and markups can exceed 20% — often by a lot.
So three leading finance professors, David Chambers and Elroy Dimson of Judge Business School at Cambridge University and Christophe Spaenjers of HEC Paris, have done a service by analyzing the financial returns of Keynes’s art collection over the past century. 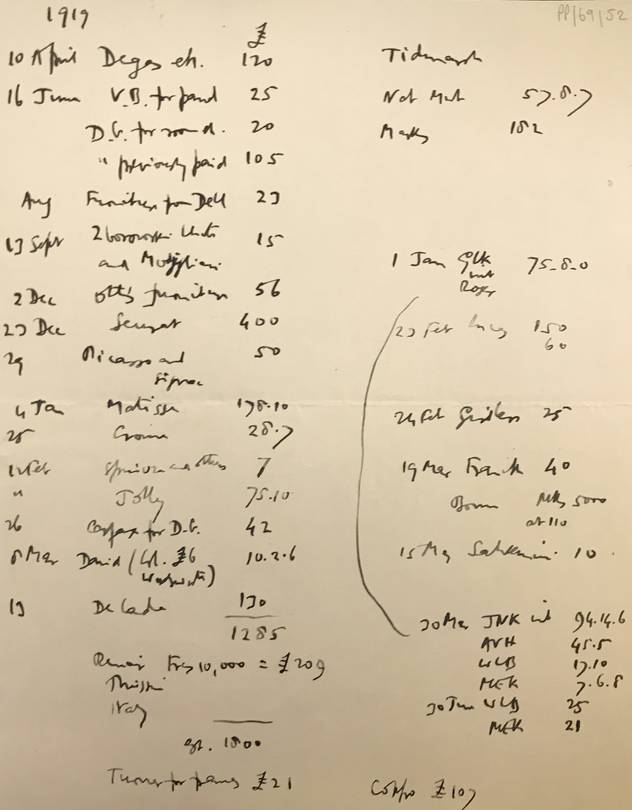 John Maynard Keynes's handwritten list of the paintings he purchased in 1919, including a Seurat for 400, a Matisse for 178.10, and a Picasso and Signac for 50 combined. PHOTO: KINGS COLLEGE ARCHIVES, CAMBRIDGE
In his three decades of collecting, Keynes paid a total of £12,847 for his holdings, roughly £600,000 ($840,000) today when adjusted for inflation. Based on appraisals in 2013 by five independent experts, Keynes’s collection is worth more than £70.9 million, or $99 million.
That’s an average return of 10.9% annually, barely a tenth of a percentage point below the return on British stocks over the same period.
Beneath that spectacular return lie several important lessons.
The Keynes collection resides today at King’s College and the Fitzwilliam Museum in Cambridge. It includes a few masterpieces by such leading impressionist, postimpressionist and modern artists as Paul Cézanne, Georges Seurat and Pablo Picasso — and a lot of less noteworthy art.
Of the 135 works in Keynes’s collection, two account for more than half its total value and 10 constitute 91%. Simulating 1,000 randomly chosen art portfolios sold at auction from 1980 through 2015, Profs. Chambers, Dimson and Spaenjers found their returns varied wildly, with most of them severely underperforming the stock market.
For investors in art and stocks alike, all this shows how important it is not to put all your eggs in one basket — in case the basket you pick turns out to be the wrong one. Only by diversifying can you be sure of ending up holding winners.
It helps to rely on expert advice. Two of Keynes’s closest friends, Vanessa Bell and Duncan Grant, were among Britain’s leading modern artists. Two other friends, Roger Fry and Clive Bell, were leading art critics. Together, they coached Keynes on what to buy.
Still, the history of Keynes’s collection shows the importance of luck. He assembled much of his art in 1918-19 and again in the 1930s. Keynes thus had rare opportunities, as the investing proverb goes, to “buy when blood is in the streets.”
Unlike stocks, whose prices don’t vary significantly depending on where they trade, art doesn’t sell on centralized exchanges. “In illiquid asset markets, like that for art, you may be able to buy an asset cheaply if you’re lucky,” says Prof. Spaenjers — for example, at a sparsely attended auction.
In 1918, with German artillery shells shaking Paris, Keynes attended the auction of the estate of the artist Edgar Degas and bought a Cézanne still life for £370.50. To put that price in perspective, a Rolls-Royce Silver Ghost cost roughly £1,200 to £1,450 around the same time, according to Amii Errington, archivist at the International Club for Rolls-Royce & Bentley Enthusiasts.
Luck can cut both ways for the art investor; changing tastes can go against you.
I know something about art as an investment; my parents were dealers in fine art and antiques, specializing in 18th-century American furniture and 19th-century paintings.

MORE IN THE INTELLIGENT INVESTOR

My father often told buyers who asked about the investment prospects of art and antiques, “Buy what you love, and the dollars will take care of themselves.” And, for generations, that was true. The prices of American art and antiques appreciated strongly, seemingly unstoppably, from the 1930s through the 1980s. Then they stalled.
On average, fine early American furniture has lost approximately two-thirds of its market value over the past 30 years, says Stephen Fletcher, director of the Americana department at Skinner, Inc., the Boston-based auctioneers and appraisers.
That doesn’t count inflation. On the other hand, it doesn’t account for the psychic return of living for decades surrounded by history and beauty.
For all his advantages of expert advice and uncanny fortune, even Keynes — one of the shrewdest investors of the 20th century — ended up with a collection in which most of the artworks barely went up in value at all.
To be realistic, investors in art should recognize the importance of luck and the risk that, in the end, the psychic return is the only thing they can count on.
Write to Jason Zweig at intelligentinvestor@wsj.com, and follow him on Twitter at @jasonzweigwsj.
Posted by Cabecilha at 8:04:00 PM No comments:

When cartoonist Ellen Forney published Marbles, her 2012 graphic memoir on bipolar disorder, readers reached out in droves thanking her for the insights her story provided into mental illness. In response, Forney started working on Rock Steady: Brilliant Advice from My Bipolar Life, published last week by Fantagraphics, which explains what happens when a person starts to recover, or at least stabilize, from mental illness.
More than a memoir or sequel, Rock Steady is an illustrated reference book whose eight chapters explore eight distinct topics related to mental health. Chapter two considers the many kinds of therapy available; chapter five discusses how to deal with medications; chapter six examines warning signs that can signal the start of a flare-up.
The structure of Rock Steadyflips the script that Forney followed for Marbles. Rather than having bits of how-to knowledge accompany a personal narrative, Rock Steadyis pragmatically structured around specific topics, which only occasionally are accompanied by witty narrative segments. Still, the humorous narratives can be the best part. In one, Forney’s cartoon alter-ego gets around a seemingly restrictive meditation prompt, on which she was unable to fully concentrate, by pretending she is being tasked by alien forces to scan the nature that surrounds her. She convinces herself that any rambling thought would create interference that would compromise the “footage.”
Aside from her illustrations, Forney’s writing style gets her message across: she does not coddle her readers, nor does she overwhelm them with complex medical terminology. For example, one section, “How to stop crying” — which hits close to home — offers no-nonsense advice. “If your emotions are in a haywire spiral and you can’t calm yourself down, try this fast, effective + fascinating technique: plunge into your MAMMALIAN DIVING REFLEX,” she explains, with the last words being written on the body of a happy-looking seal diving into a body of water. “A mammal’s response to immersion in freezing water is to slow the heart + shut down non-essential body processes,” she continues. “Note that emotional mayhem = a non-essential body process.”
For the most part, the book also does a good job avoiding all-too-common clichés of wellness, self-care, and the romanticization of mental illness. A small exception could be Forney’s “The Mood Disorder Hall of Fame,” which first lists living artists, performers, and writers with psychiatric conditions who, nonetheless, are thriving. It’s followed by a “heritage mural” featuring historical artists and writers with mood disorders. While its presence is easily justified as being a “stigma squasher” within Rock Steady, it could easily, and counterproductively, be taken out of context. A social media post featuring the very same image, for example, would perpetuate the romantic ideal of the tortured artist using their demons for the sake of art.
At times, the scantiness of narrative segments in favor of long, explanatory chapters makes Rock Steady a less “pleasurable” read than its predecessor. Sections like “Focus on your body” or “Be kind to yourself” contain long, hyper-detailed blocks of text. While mental health is not a topic that can fit into neat text boxes, Tweets, or Pinterest-worthy platitudes, at times the long passages make the page structure feel unbalanced, and the all-too-valuable information becomes harder to peruse. Bubbles of texts, linking to boxes, pointing to arrows are not very easy on the eye.
Still, even without a gripping narrative arc, Rock Steady achieves its goals in a brilliant manner. It might not be engrossing, but it will be easy and comforting to consult for some issue-specific advice and relief. Hopefully, not too many readers will need to peruse all eight chapters in one sitting.
Ellen Forney’s Rock Steady: Brilliant Advice From My Bipolar Life is available from Amazon, Fantagraphics, and other booksellers.
comments (0)
Posted by Cabecilha at 7:08:00 PM No comments: