gallery gals and socialites from europe :)))

Whether joining in the family fashion empire or cooking up a brand-new venture, the latest flock of European swans have that certain something.


Jemima Jones
“Food was just always on my brain."

Jemima Jones, at her family’s home in London,  wears a Lanvin dress; her own jewelry.
Photography by Angelo Pennetta
Styled by Gianluca Longo
gazine.com/people/insiders/2015/09/fashionable-gallery-girls/photos/slide/1

This fashionable foursome straddles the line between art and commerce.

JiaJia FeiThe associate director of digital marketing at New York’s Guggenheim Museum can pull off some outrageous looks (just scroll through her Instagram, @vajiajia). But for the most part, Jiajia Fei, 28, sticks to what she calls “museum-nerd chic”—minimalist pieces by Isabel Marant or Helmut Lang—accentuated by statement eyewear, a snakeskin briefcase, and her bowl cut, which she has touched up herself every two weeks for the past seven years. “It’s a part of who I am,” Fei says. “I can’t possibly have any other hairstyle.”
Photography by Biel Parklee

“The GIF, a compressed file format for images that can be used to create simple, looping animations, turned 25 this year (2012),” notes Oxford University Press’ Katherine Martin, “but like so many other relics of the 80s, it has never been trendier.”

When Republicans Were Progressive: US Pol-toons, Circa 1912


When Republicans Were Progressive: US Political Cartoons, Circa 1912 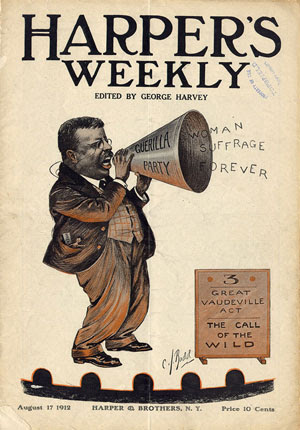 C. J. Budd, Harper's Weekly, April 17, 1912. Roosevelt as vaudeville barker shouting "Women's Suffrage Forever." (all images courtesy Marc H. Miller) (click to enlarge)
Marc H. Miller is a curator, writer, publisher, artist and art historian, and he is the man behind an exhibition that is currently going on at the Charles P. Stevenson Library at Bard College in upstate New York, The Presidential Election of 1912 in Cartoons. Drawn from his personal collection these images provide a window into the world of US Presidential politics a hundred years ago when Theodore Roosevelt, who was a Republican and a “Progressive” ran in a hotly contested race.
As we gear up for the 2012 elections, these images are a useful reminder about the down and dirty world of politics, what we can expect in the year to come and political mudslinging is nothing new.
Miller is the founder of Ephemera Press where he has worked with cartoonists like Tony Millionaire and James Romberger on a series of pictorial maps of historic New York City neighborhoods. He also curated Louis Armstrong: A Cultural Legacy, which traveled to the National Portrait Gallery and was circulated nationally by the Smithsonian Institution.
I contact him for a quick interview about the nature of political cartoons and their history. He also provided Hyperallergic with a number of images that show the richness of his archive and the diversity of political cartoons during the period.
*   *   * E. W. Kemble, Harper's Weekly, March 30, 1912. Roosevelt as a cross-dressing, rock-throwing socialist suffragette. (all images courtesy Marc H. Miller)
Hrag Vartanian: When was the modern election cartoon born?
Marc H. Miller: Modern political cartoons go back at least to the 1830s when Andrew Jackson was president, but they really became popular with the rise of picture magazines in the 1860s and 70s, and later with the emergence of picture newspapers in the 1890s.
Political cartoons were then a small but conspicuous part of the pictorial press, which was the first in an ongoing sequence of new mass media formats, the predecessor of television and the Internet today.
HV: What is unique — if anything — about the Roosevelt-era images?
MHM: The 1912 images are unique mostly because of the tremendous passions that the election inspired. It was an unusual three-party race with former president [Theodore] Roosevelt running as a Progressive. Cartoonists always loved portraying TR.
In 1912 much of the pictorial press turned against him with a vengeance. There were some incredible veteran cartoonists working at the time, like Edward W. Kemble and Udo J. Keppler. Udo J. Keppler, Puck, April 10, 1912. Roosevelt as a tattooed man with his lies indelibly inked on his body.
HV: What lessons can we learn for today from these images? Are there any common themes?
MHM: They remind us that partisan personal attacks in the media are nothing new. Just like today, the popular mass media a hundred years ago had no qualms about putting out totally distorted, crass images. Their motivation was also largely the same, in part a desire to advance a political agenda, but even more out of a need to attract attention and become commercially successful.
HV: What do you think about contemporary political cartoons? Have they gotten better or worse? And in what way?
MHM: There is a lot of great political cartooning today like Barry Blitt’s New Yorker covers, and on television there is South Park. I like drawn cartoons, although today most of the best opinionated, political satire take other forms like the Colbert Report [television show], and the montages of sound and images seen in political commercials. Theodor Seuss Geisel, "The veteran recalls the battle of 1943," published by "PM Magazine" on January 5, 1943 (all images courtesy Dr. Seuss Collection, Mandeville Special Collections Library, UC San Diego)
Although the majority of his books are already some half a century old, Dr. Seuss remains one of the most beloved children’s authors and illustrators in American history. I’d bet that most of us, if asked, could name a Dr. Seuss favorite that made a lasting impression (One Fish Two Fish Red Fish Blue Fish for me). But how many of us knew that Dr. Seuss, aka Theodor Seuss Geisel, was also a political cartoonist?
Geisel, as it turns out, was the chief editorial cartoonist for the leftist New York newspaper PM between 1941 and 1943, and while there, he made over 400 political cartoons about the war. Nearly two hundred of them were published in a book titled Dr. Seuss Goes to War, and the entire collection is housed in the Mandeville Special Collections Library at the University of California, San Diego, which has made all of the drawings available online. They range from encouragements to buy war bonds to sharp critiques of American isolationism to caricatures of Hitler and Mussolini, reflecting his strong support for the World War II effort and a biting disappointment with the US government’s inaction for the first part of the war. 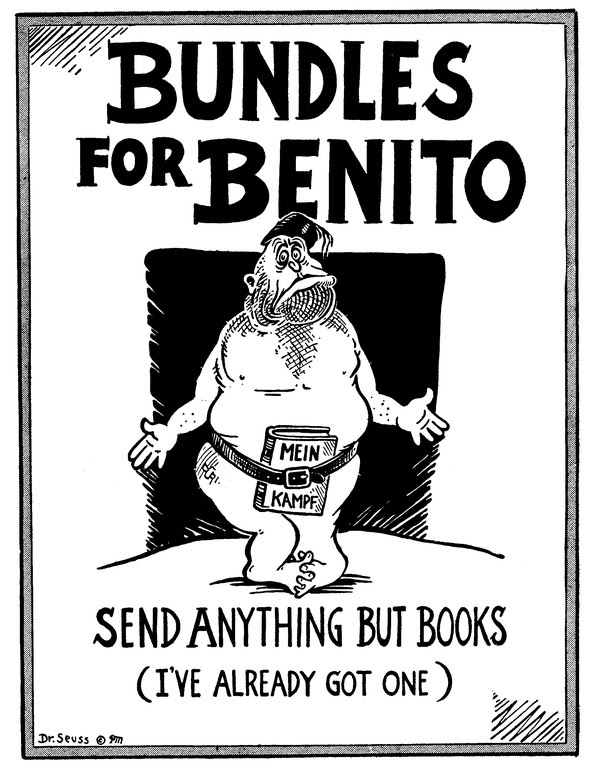 Theodor Seuss Geisel, "The Appeaser," published by "PM Magazine" on June 16, 1941
What’s most striking, though, is how the world of the cartoons is so distinctly Seussian. The loose, animated, style and fantastic creatures and human-animal hybrids for which Geisel is still known appear throughout his political oeuvre. Most of us probably wouldn’t expect to see a Horton-like figure alongside Hitler, but here we do, and amazingly, it works.
Geisel went on to support the US war effort more directly, joining the army in 1943 as a captain and the commander of the Animation Departmant of the First Motion Picture Unit of the Air Forces. There he wrote the propaganda film favorites Your Job in Germany and Our Job in Japan, among others. Theodor Geisel, "Don't let them carve THOSE faces on our mountains," published by "PM Magazine" on December 12, 1941 Theodor Seuss Geisel, "Hm-m! Can't understand it!," published by "PM Magazine" on February 12, 1942
(h/t Huffington Post)
Editor’s note: One of our readers wisely pointed out that while Geisel’s cartoons express the standard liberal leanings of his day, they also reflect the racism of the time. Rather than caricaturing Emperor Hirohito or other specific individuals, Geisel drew Japanese people according to an ugly, generalized stereotype — “piggish nose, coke-bottle eyeglasses, slanted eyes, brush mustache, lips parted (usually in a smile),” in the words of Richard Minear, author of Dr. Seuss Goes to War. Geisel even went as far as a cartoon representing Japanese Americans as an internal fifth column, which appeared in print only six days before President Roosevelt authorized Japanese-American internment in 1942. Minear’s response to this glaring oversight says it best:

Perhaps it is no surprise that American cartoonists during the Pacific War painted Japan in overtly racist ways. However, it is a surprise that a person who denounces anti-black racism and anti-Semitism so eloquently can be oblivious of his own racist treatment of Japanese and Japanese Americans. And to find such cartoons — largely unreproached — in the pages of the leading left newspaper of New York City and to realize that the cartoonist is the same Dr. Seuss we celebrate today for his imagination and tolerance and breadth of vision: this is a sobering experience.