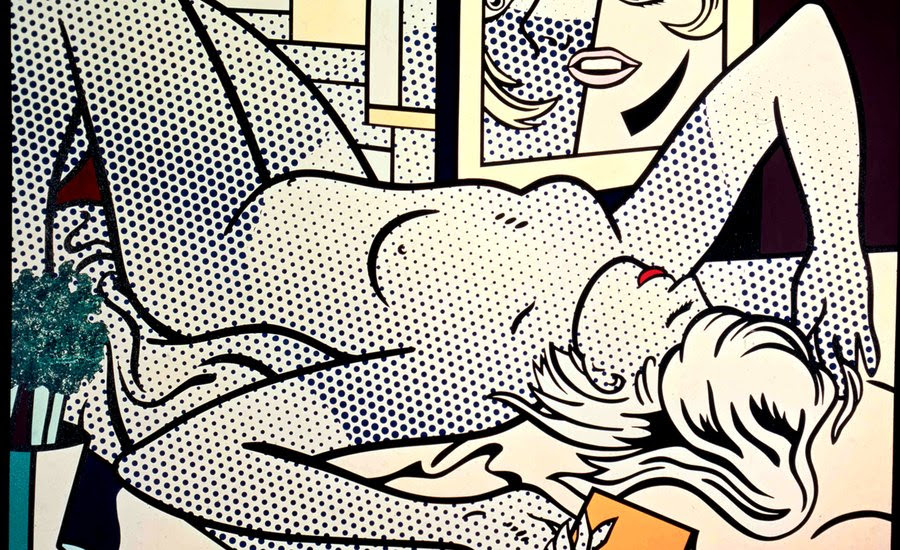 Roy Lichtenstein's Nude With Abstract Painting (1994)
The Pop artist Roy Lichtenstein is famous for capturing slices of modern life in his signature sprays of Ben-Day dots, exploring adult themes through the visual idiom of comic strips. But... did you know that if you piece together his individual paintings, they tell a story? And not just any story, but a heartbeat-quickening tale of love, art-world ambition, intimacy, and betrayal—all in the sun-swept playground for the wealthy known as the Hamptons?
Here, below, for the first time, is the romantic saga, told across 20 Lichtenstein masterpieces. Nudes With Beach Ball, 1992
Later, private fun in the sun. Funny, no one here is talking about the art market. 'Whaam!', 1963
Vicki didn't have to fake it this time. Maybe she never will have to again. Mustard on White, 1963
She makes lunch for Brad, and eats a sandwich. These behaviors are rare for a gallerina. Shipboard Girl, 1965
On the ferry to Sunset Beach, Vicki rejoices. All the girls at the Sotheby's Institute will be so jealous. Bedroom at Arles, 1995
Brad heads to his Red Hook studio to prep for the summer group show Ryan's curating... Aloha, 1962
At a Perrotin opening, he meets Aloha. Her summer home is Gstaad. Her winter home is Moloka'i. She likes Brad's... brushstrokes. Kiss V, 1964
Eventually, Brad returns to Amagansett, but it's too late. Forget It, Forget Me, 1962
His love affair with Vicki, and Pop Art, is over. (This is in part due to her change to an unattractive hairstyle.) In the Car, 1965
The ride back to Manhattan is tense and long. Thank God Vicki has the comforting leopard stole her father gave her for just such situations. Thinking of Him, 1963
Brad's fall show at Deitch will go on to be a tremendous success. Vicki never forgets him. Head With Blue Shadow, 1965
Someday, his biographers will simply call her "That Hamptons Girl." Is this what a city looks like in its dreams?


Get Aeon straight to your inbox

Is this what a city looks like in its dreams? A 360° dive into Tokyo

An omnidirectional maze of marvels, this motion graphics animation takes inspiration from the neon lights, towering architecture, public transport and tight spaces of Tokyo to create a strange and strikingly immersive experience. The ricocheting ride through the urban environment reimagines the city as a fever dream of fantastically illuminated buildings, tilting streets and trains, and anonymous faces whizzing by just out of grasp.
Tokyo Light Odyssey is an interactive 360° video. As it plays, click and drag your cursor on the video player to explore each scene.
Video by WOW inc

movement, the body, and light in art