In praise of the semicolon

In praise of the semicolon, a most maligned punctuation mark

Semicolon: The Past, Present, and Future of a Misunderstood Mark by Cecelia Watson reviewed

David Crystal
12:53 PM
Semicolon: The Past, Present, and Future of a Misunderstood MarkCecelia Watson
Ecco, pp.224, $17.99
Now, how shall I start this review?

Ah, that’s more like it. The semicolon gives me the best of both worlds. It helps me pause, and have a think, and yet pushes me forward to what I want to say next. It separates and unites simultaneously. It does a job that no other punctuation mark does. And the way to see this is to develop a sense of the contrast. What happens if we punctuate a sentence differently?
This isn’t something that can be summed up in a simple rule, and those who have tried over the past 200 years to find rules governing punctuation have failed miserably, as Cecelia Watson shows in the opening chapters of her insightful book. Punctuation tries to capture two incompatible drives: the desire to mark grammatical structure, and the desire to express the dynamic of the speaking voice. The tension between them means that no two people share exactly the same set of preferences. That’s easy to demonstrate. Give a group an unpunctuated page and ask them to mark it up, and you’d be lucky to find two who would do it in exactly the same way.
Watson approaches her subject historically. She begins by recalling writers who have gone on record as hating the semicolon, such as Kurt Vonnegut, and traces its history of transformation ‘from a mark designed to create clarity to a mark destined to create confusion’. We see its origins in 1494, when Aldus Manutius first presented it, and then the way it came to be treated in the convoluted ‘grammar wars’ of later centuries, as writers struggled without success to reduce its complexities to simple rules. Two fascinating chapters show the way semicolons have played a central role in court cases — including the horrifying story of Salvatore Merra, in which the much-debated legal interpretation of a sentence containing a semicolon ultimately led to his execution.
The power of the book lies in its leisurely literary illustrations of the way writers have used semicolons to great effect, including Irvine Welsh, Raymond Chandler, Herman Melville, and brilliantly in Martin Luther King’s ‘Letter from Birmingham Jail’ — a moving sequence of semicolon-separated plaints that build to one of the most powerful climaxes I have ever read. I’d defy anyone to repunctuate this and retain the rhetorical effect. The extracts from Welsh and Chandler are especially well chosen, for they give the lie to those, like Vonnegut, who thought that the only purpose of semicolons is to show that the writer has ‘been to college’. Her example from Trainspotting is as far away from college as you can get, and Mark Renton’s description is all the more powerful for the use of a semicolon. (‘The sweat wis lashing oafay Sick Boy; he wis trembling.’)
A great deal that Watson says is basic linguistics, and especially stylistics — domains that, curiously, she doesn’t mention. And yet she would find huge support for her approach there, especially in the way a semantic and pragmatic perspective helps to remove the restricting effect of a naive grammaticism. It’s the approach I’ve used myself in Making a Point: you see the system in language by observing the options that the language makes available. Punctuation is a system, though not subject to the same kind of rules that we see in some other areas of language. Watson’s examples of contrasting marks illustrate this very clearly.
This is no pedestrian account of how semicolons work, with boring sentences taken out of context and their marks defined in an abstract way. The author wants us to appreciate the ‘beauty in language that rules can’t comprehend’. She wants us to see that trying to put a ‘protective fence’ around punctuation is a limiting response that doesn’t allow us to see the true power of language in communication. Recognizing this is liberating. We begin to realize that instead of punctuation controlling us, we can control it.
Watson thinks of herself more as a punctuation therapist than a punctuation theorist, and her clarity and good humor pervade the book, along with some cheeky illustrations by Anthony Russo. Some people will hate her for even trying to make us appreciate semicolons, but not me. As I say, I loved this book; I really did.

This article was originally published in The Spectator magazine.
Posted by Cabecilha at 2:24:00 PM No comments:

The Fight to Redefine Racism 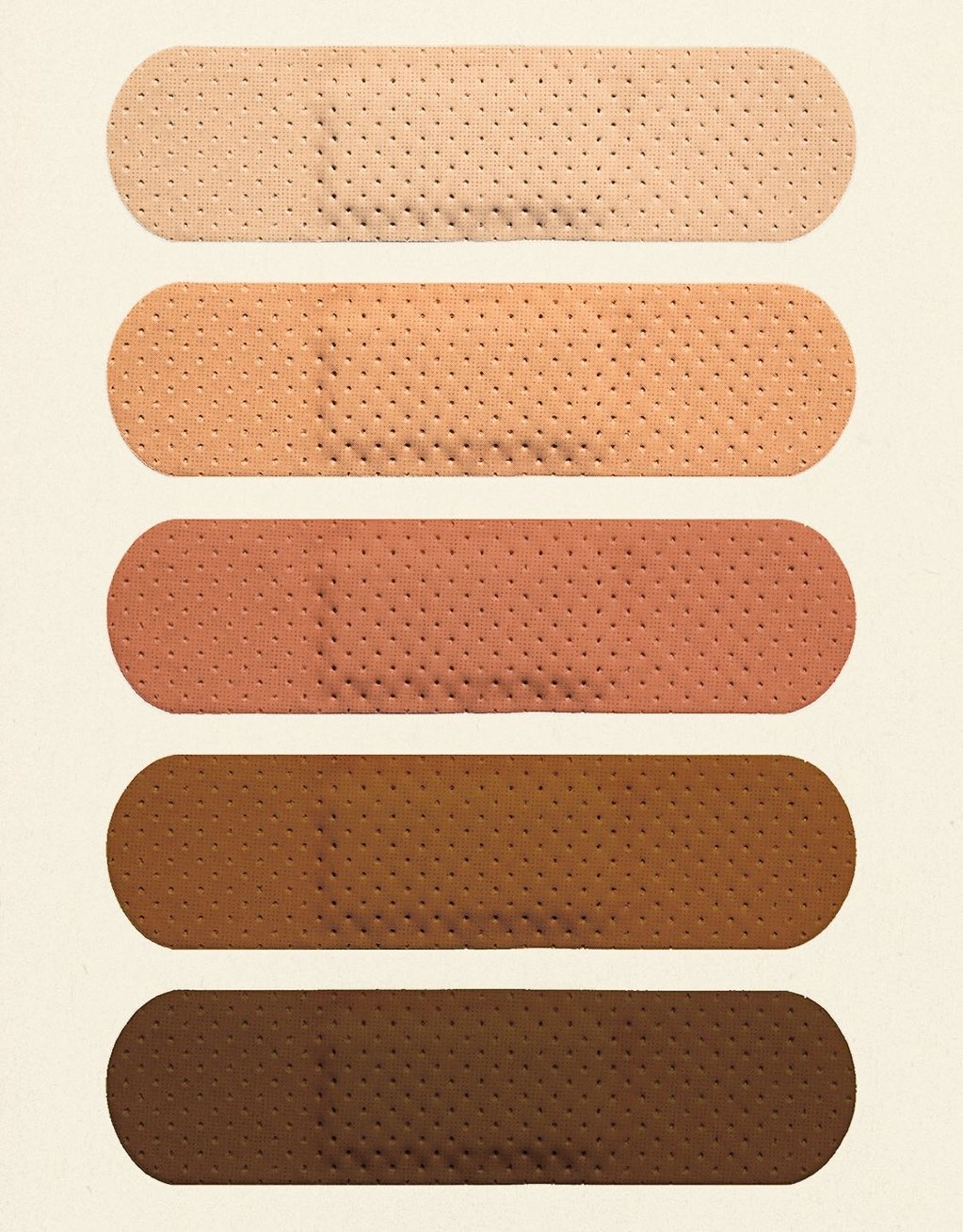 As the word “racist” becomes more capacious, will it lose its power?
Illustration by Na Kim; photograph from EyeEm / Getty

In “Stamped from the Beginning,” Kendi divided the racists into two kinds, segregationists and assimilationists. Historically, segregationists argued that black people were inherently defective or dangerous, and needed to be kept under control. Assimilationists sounded kinder: they often fought against black oppression, but they also argued that black people needed to change their behavior—their culture—in order to catch up to white people and assimilate into white society. In 1834, the American Anti-Slavery Society issued a pamphlet of admonishment:

We have noticed with sorrow, that some of the colored people are purchasers of lottery tickets, and confess ourselves shocked to learn that some persons, who are situated to do much good, and whose example might be most salutary, engage in games of chance for money and for strong drink.

Sometimes these lectures were intended as a political strategy, on the theory that civil rights would be easier to win if black Americans were perceived to be working hard. And sometimes, especially in the twentieth century, they were intended as acknowledgments of the limits of politics. In Kendi’s view, though, talk of failures in culture or conduct supposes that black people are somehow to blame for the effects of racism—as if they could have chosen, instead, to be unaffected by it. He thinks that it is both unfair and impractical to suggest that black communities must somehow heal themselves before the government can intervene. Ranging across the centuries, “Stamped” identified segregationists, assimilationists, and antiracists with a confident clarity that was also the book’s greatest weakness, because it reduced complicated lives to a series of pass-fail tests. Kendi noted with satisfaction that when Du Bois was in his sixties he concluded that black people would never “break down prejudice” through virtuous comportment—thus becoming, at last, an antiracist.
Kendi’s position has radical implications: in ruling out criticism of black culture or black behavior, it stipulates that any problems must be either fictional or the result of contemporary discrimination. If you reject “assimilationism,” then you can’t suggest, as Obama did, that centuries of racism have eroded the black nuclear family. You might try to show, instead, that black men are often shutout of the labor market, which makes them less likely to marry. Or you might conclude that the nuclear family is merely one cultural ideal among others, and not one to be universally preferred.
In the case of education, Kendi’s commitment to antiracist thinking leads him to dispute the existence of an “achievement gap” between white and black students. Black students may, on average, get lower scores on standardized tests, and drop out of high school at higher rates. But such metrics, he argues in “How to Be an Antiracist,” are themselves racist, devised to “degrade” and “exclude” black students; he suggests that a “low-testing” black student and a “high-testing” white student may simply be demonstrating “different kinds of achievement rather than different levels of achievement.” This celebration of difference comes to an end when it is time to judge the educational systems themselves. Kendi claims that “chronic underfunding of Black schools” does create “diminished”—and not merely “different”—“opportunities for learning.” Throughout the book, the idea is to judge unfair policies, while refusing to judge, as a group, the people who are subjected to them. Kendi believes that “individual Blacks have suffered trauma” in America, but he rejects the “racist” idea that “Blacks are a traumatized people.”
In successive chapters of “How to Be an Antiracist,” Kendi explains that there are many forms of racism: there is class racism, which conflates blackness with poverty, as well as gender racism, queer racism, and something called “space racism,” which is less exciting than it sounds—it has to do with the way people associate black neighborhoods, or spaces, with violence. “ ‘Racist’ and ‘antiracist,’ ” Kendi writes, “are like peelable name tags that are placed and replaced based on what someone is doing or not doing, supporting or expressing in each moment.” This suggests that people can change, as Kendi did, and as Du Bois did. But it also suggests that nonracist identity is contingent and unstable: we are all constantly peeling and resticking those nametags.
MORE FROM THIS ISSUE
August 19, 2019


Shouts & Murmurs
Recent Articles of Mine
By Jack Handey


Sketchbook
The Worst of the 1919 White Sox
By Barry Blitt