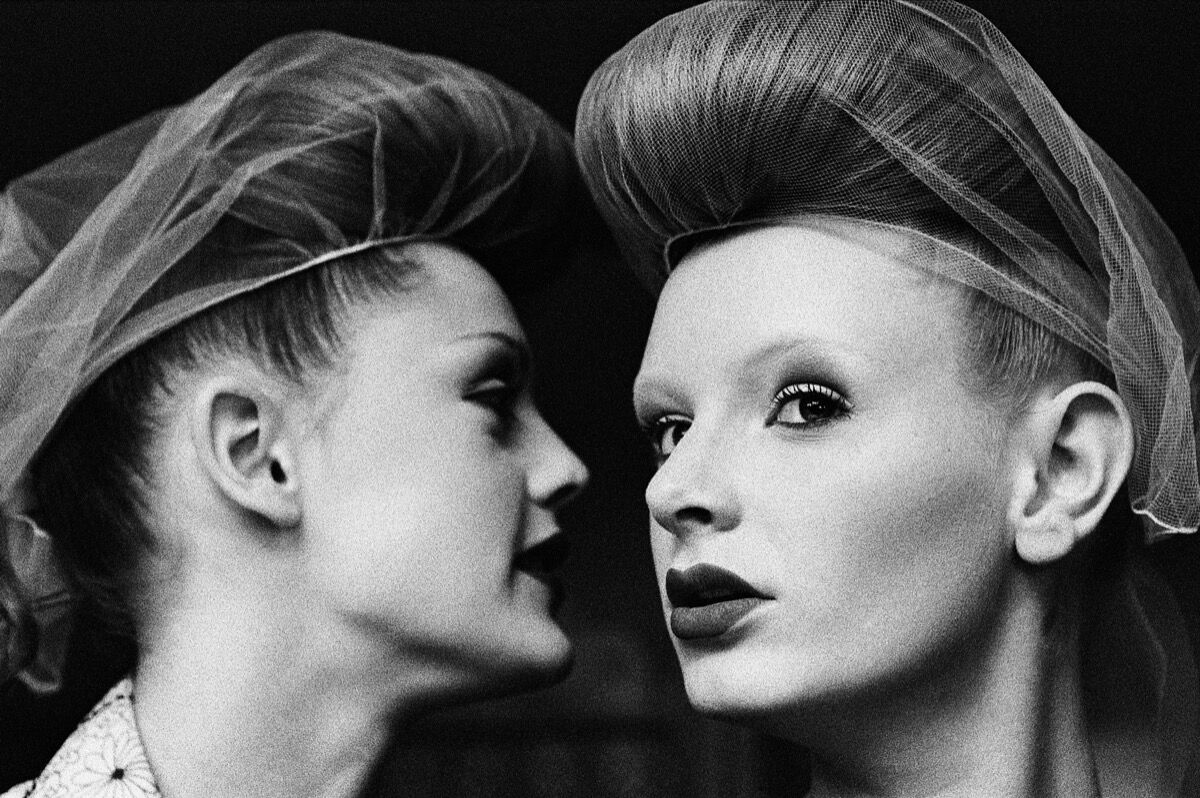 Ann Ray, Whispers I, 1998. Image courtesy of Ann Ray and Barrett Barrera Projects.
To have the greatest impact, fashion design must live beyond store windows and runway shows. In the last 60 years, fashion photography has reached new heights of artistry, with photographers crafting a label’s visual presence to gallery- and museum-worthy stature. Beyond fashion campaigns, photographers can also capture the designers at work backstage, allowing us insight into a level of creativity and dedication that’s not readily visible in the seams of a zipper or the hem of a skirt.
Some of the most intimate and intricate designer and photographer pairings ever include Versace and Richard Avedon, Alexander McQueen and Ann Ray, and Rodarte and Autumn de Wilde. The following six partnerships have resulted in iconic collaborations that have elevated both artistic mediums through innovative imagery. 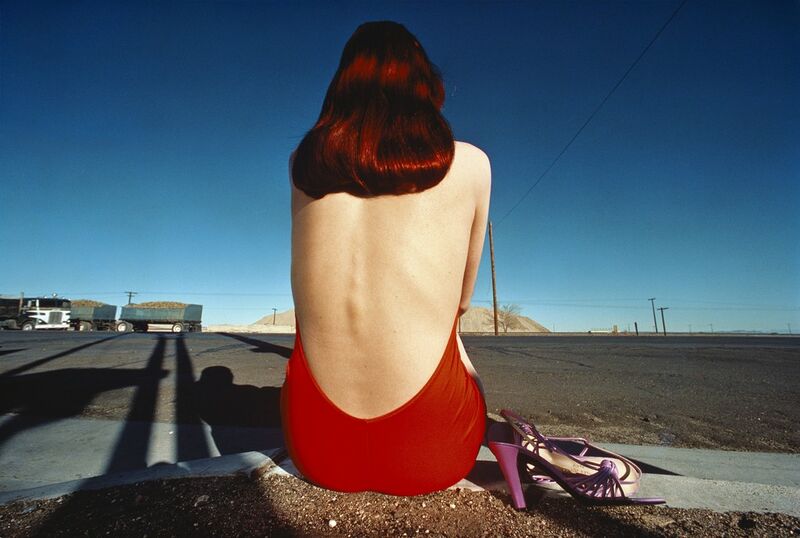 Guy Bourdin
was known for his bold, sexualized, and surreal imagery, which he brought to campaigns for Charles Jourdan. Through his images, Bourdin unraveled the power of fantasy. Such complexity and intensity of storytelling was previously unexplored in shoe campaigns. His photographs for Jourdan “dared to barely show the product and turned the shoe into a trivial element of a theatrical mise-en-scène,” according to Louise Alexander Gallery, which represents Bourdin’s work. The famed image of a model in seamed fishnets whose top half is obscured under a red and yellow background came from this era, as did the image of a woman climbing a ladder in front of a wall of white shoeboxes. Bourdin shot for the brand for around 15 years, and in that time, he produced advertising images that are now considered works of fine art, displayed in museums internationally. 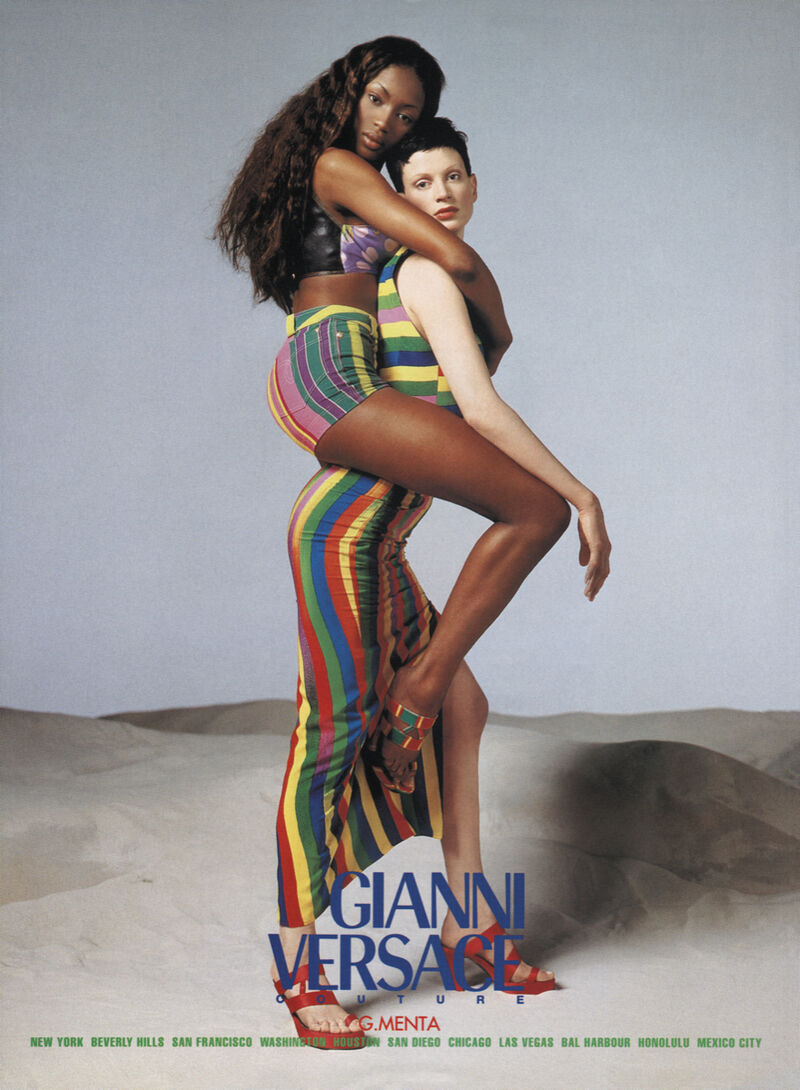 By 1993,
Richard Avedon
was known and beloved for his portraiture and fashion photography imbued with a sense of movement. He brought this sense of movement to Versace, where the gestures of 1990s icons Kate Moss and Naomi Campbell echoed Avedon’s earlier images with ’60s-era supermodels Veruschka and Twiggy. “This fashion moment was the epitome of the power-woman era—a celebration of androgyny and feminist energy before grunge came in,” wrote renowned fashion journalist Suzy Menkes in 2014. The images were praised for their freshness and energy. Gianni Versace and Avedon complemented each other: They were equally timeless and of the moment; they were also studied perfectionists. Together, they made what’s now considered not just advertising, but art. “They were like brothers, they had the same take on things, the same drive for perfection and the same energy,” Donatella Versace said in 2008. 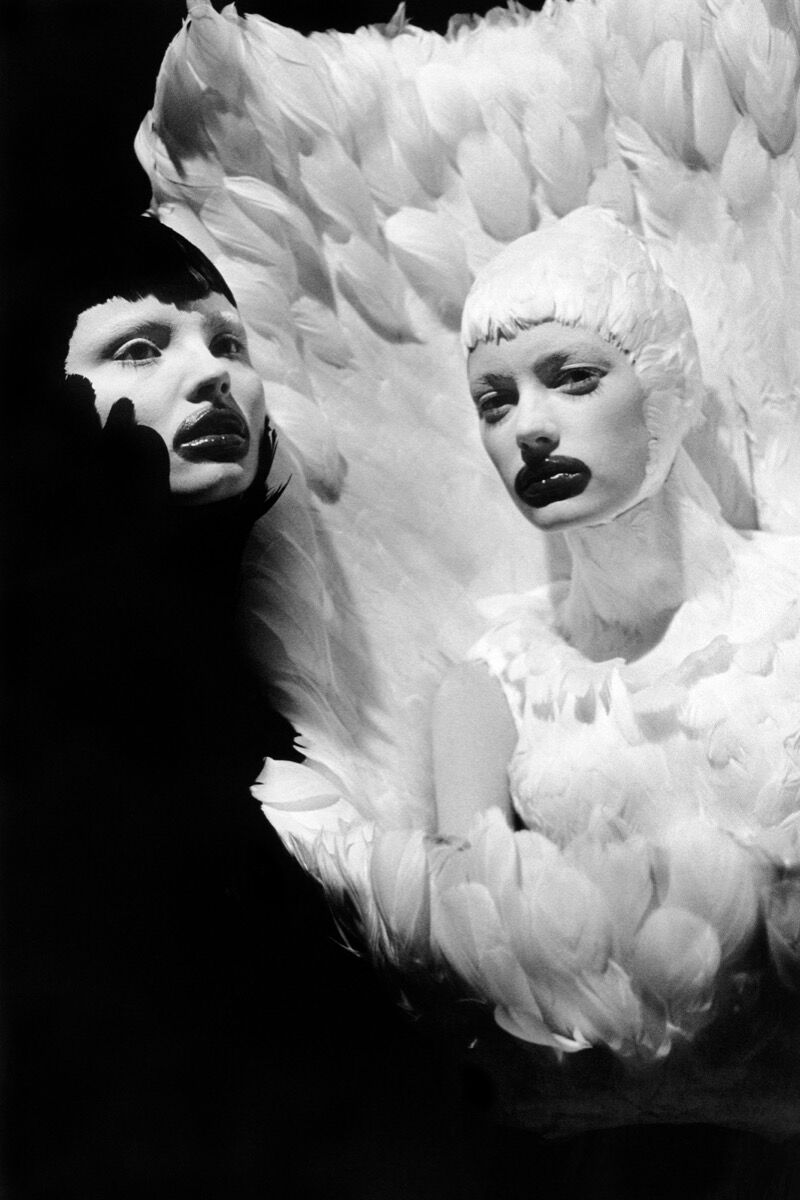 “I love accidents,” photographer Ann Ray said on the occasion of her new exhibition “Ann Ray & Lee McQueen: Rendez-Vous.” The show is on view at projects+exhibitions, the new gallery space of St. Louis–based organization Barrett Barrera Projects, until February 15, 2020. For 13 years, from 1997 to 2010, Ray was handpicked by legendary designer
Alexander McQueen
to document his creative process behind the scenes at his runway shows. The images in the exhibition, selected from Ray’s extensive archive of over 35,000 frames, are an intimate reflection of the friendship between the designer and the photographer. “I like your images but I’m broke. Give me your photos, I’ll give you clothes,” McQueen told Ray when they first started working together. And in lush black and white, with an occasional pop of color, Ray was able to see McQueen and his work the way nobody else did. She used both 35mm and medium-format cameras to make the images, which are exercises in raw glamour—like McQueen’s work itself. Ray said it was a privilege to serve his designs, capturing what she calls “eternity moments” and the designer’s sheer joy in creation. 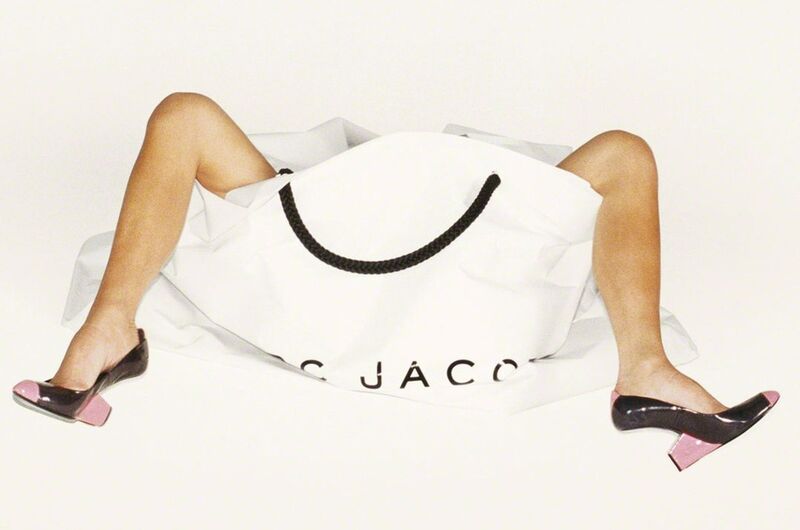 The first campaign
Juergen Teller
shot for Marc Jacobs was of Sonic Youth’s
Kim Gordon
while she was performing onstage, wearing one of her favorite dresses by the designer. Though it was meant to be an ad, it was shot during an actual concert in 1997. In the next 15-plus years that Teller and Jacobs regularly collaborated (they still do periodically), the other campaigns were more intricately designed. What looks like intimate peeks into lives of cooler-than-cool celebrities like Gordon, Rufus Wainwright, and Victoria Beckham were, in reality, deeply orchestrated, but almost never retouched. The campaigns were starmaking for both the photographer and the designer. “The better we got, the more confident we got, him with his design, me with my work,” Teller said in 2012. Teller’s quirky images of celebrities placed on a white page set a new standard in the industry; campaign images had previously only run full-bleed. The resulting photographs defined their entire working relationship: this distinctly off-kilter cool that both creators are still known for. “I know when I am taking a good picture. I just know it,” Teller said in 2015. “I feel it with my mind and my body.”

Before Autumn de Wilde met Laura and Kate Mulleavy, the sisters behind modern-classic line Rodarte, she had primarily been shooting music photography. Her work had graced the album covers of famed indie rock artists like Elliott Smith and Beck. The sisters found her at the right time, when de Wilde was seeking an opportunity outside of her field. It was a fortuitous collaboration for them, as well: They had brand-new designs, and needed photos to take with them to New York. In 2005, before anyone really knew what Rodarte was, de Wilde shot their first lookbook. Since then, she has worked with them on everything from backstage fashion week photography to campaigns to behind-the-scenes documentation of their costuming for Black Swan (2010), as well as their directorial debut, Woodshock (2017). Their visuals together are modern yet dreamy, nostalgic and ironic, and distinctly now. “I have always tried to make everything feel like a scene from a movie,” de Wilde said in 2018. “That’s what I try to give artists, musicians, actors, designers, directors, writers, whoever I’m photographing: permission to theatricalise their life a bit.”

When Alessandro Michele took the helm at Gucci in 2015, he brought on British photographer
Glen Luchford
. Luchford began his career shooting subcultures, working for magazines exemplifying the epitome of British cool, like The Face. He eventually won awards for his work on Prada campaigns in the 1990s. Today for Gucci, Michele’s passionate embrace of nostalgia and vintage-inspired styles is alive and well in Luchford’s images and video work, which capture everything from scenes inspired by 1950s movie musicals to quirky, old-school science fiction. “There’s no written narrative. You create a world in a sort of all-encompassing collection of ideas and things that you then you have to sort of steer through,” Luchford said in 2018. At once gritty and expressive, thoughtful and cinematic, Luchford’s images have encompassed the spirit of Michele’s Gucci in a total rebrand throughout the last four years, earning him continued international acclaim.

How the Black Turtleneck Came to Represent Creative Genius

After the Bauhaus, the Lesser-Known Ulm School Had a Seismic Impact on Design 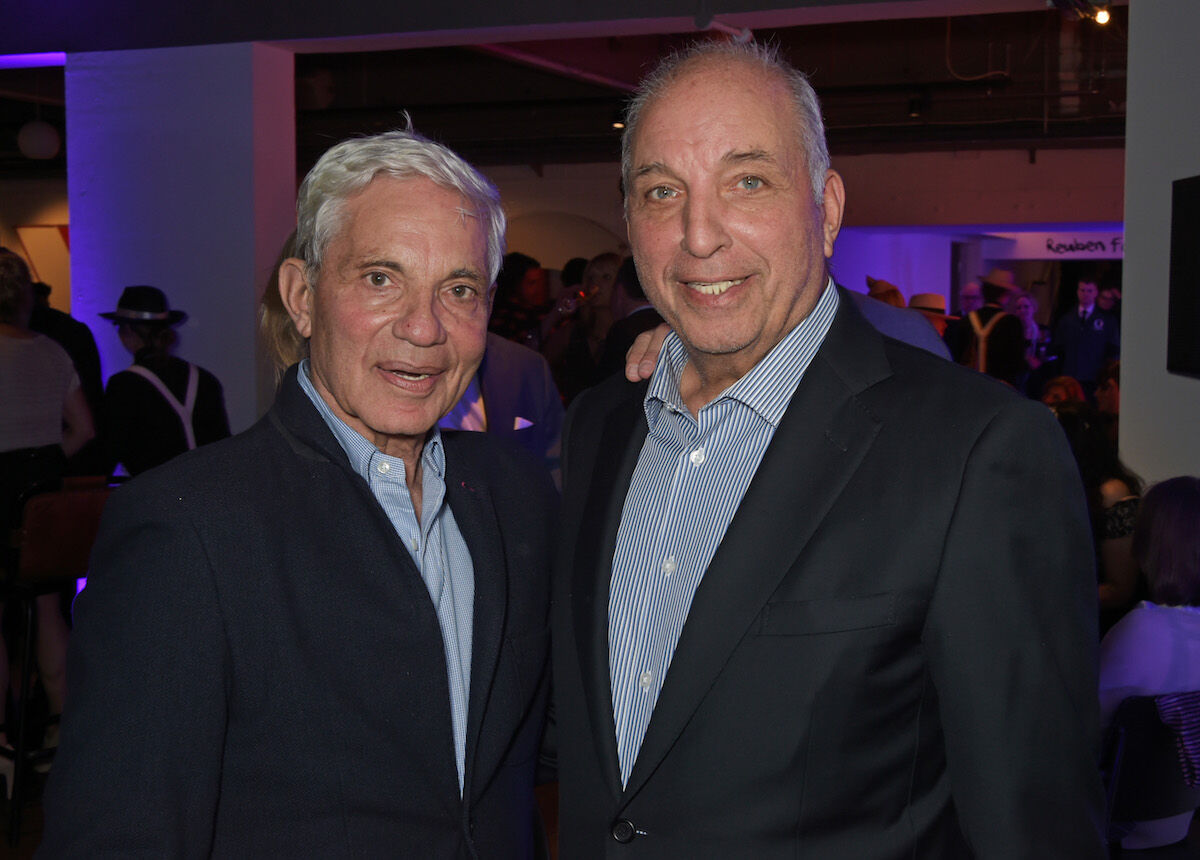 Simon Reuben (left) and David Reuben (right). Photo by David M. Benett/Getty Images for Lyric Hammersmith.
One of the mystery players in the scandal surrounding art dealer Inigo Philbrick has been revealed: The pair of billionaire brothers David and Simon Reuben has been confirmed to be the owners of Guzzini Properties Ltd., one of the parties claiming ownership of a work sold by Philbrick, who has vanished. The Reuben brothers come from the second richest family in the U.K., according to the Sunday Times.
Guzzini Properties sued Philbrick over Rudolf Stingel’s 2012 portrait of Pablo Picasso in October. The suit claimed that the firm had purchased the Stingel portrait and two other works for $6 million in 2017, and that Guzzini then sold the work through Christie’s in May of this year for $6.5 million. However, Christie’s still holds the work because two other companies have a financial involvement in the painting: Satfinance Investment Ltd. paid the art dealer $3.35 million for half of the work in January of 2016, while German financial services firm FAP GmbH claims it bought the painting in full for $7.1 million in February 2016.
“Given the ongoing nature of the multiple legal cases in this matter, Christie’s agrees that determination of rightful ownership of the Stingel work by the courts is the next necessary step forward,” Christie’s said in a statement, according to Bloomberg.
Philbrick himself has disappeared: His galleries in Miami and London appear to have closed, and he has missed court hearings in those cities. His lawyers in Miami no longer represent him, and his assets were frozen by a judge in London.
Philbrick is at the center of several other lawsuits in New York, Miami and London. The Stingel portrait isn’t the only work sold by Philbrick to which companies have staked competing claims: In October, FAP GmbH sued Philbrick for refusing to move pieces they claimed they purchased to “independent specialist storage facilities.” One of the works mentioned in the lawsuit, Yayoi Kusama’s installation All the Eternal Love I Have for the Pumpkins (2016) is on display at the Institute of Contemporary Art, Miami, and has reportedly been sold to the Royal Commission for AlUla.