DORANY PINEDA, DOUG SMITH, KEVIN BAXTER
When Florida residents were allowed to start going to the beach again last weekend, photos of the crowds went viral along with the hashtag #FloridaMorons.
This weekend, amid the year’s first heat wave, thousands converged on some California beaches to take advantage of the cooler temperatures and to get a break from weeks of isolation at home.
There was some debate about the size of the crowds and the degree to which those who went to the beach were able to maintain social distance.
But images from places including Huntington Beach also went viral and raised questions about whether allowing the beaches to reopen could set back California’s progress in slowing the spread of coronavirus. It also is testing the exhortations of health officials, who urge staying at home as the best path to flattening the coronavirus curve and restarting the economy.
California was the first state in the nation to adopt a stay-at-home order, and experts say that swift action has prevented a greater death toll, like those of New York and New Jersey. Gov. Gavin Newsom urged residents to avoid beaches and other public gathering places, expressing fear it could cause more people to get sick.
Some communities, including Los Angeles County and many parts of the Bay Area, have kept beaches closed. On Saturday, L.A. beaches remained largely empty.
“My compliments to our community for staying away from the beaches in LA,” Los Angeles Police Chief Michel Moore said Saturday on Twitter. “From Malibu, Santa Monica, Venice, to Dockweiler - All Clear!!”
“We won’t let one weekend undo a month of progress,” L.A. Mayor Eric Garcetti tweeted Sunday. “While the sunshine is tempting, we’re staying home to save lives.”

We won’t let one weekend undo a month of progress.
While the sunshine is tempting, we’re staying home to save lives.
The places we love — our beaches, hiking trails — will still be there when this is over.
And by staying home, we’re making sure our loved ones will be too.
— MayorOfLA (@MayorOfLA) April 26, 2020

Dr. William Schaffner, professor of preventive medicine and infectious diseases at Vanderbilt University, sees no absolute rule of thumb in terms of the right time to open beaches. He’s more concerned with how it is done.
“Reopening, like beauty, is in the eye of the beholder,” Schaffner said. “We have to be clear here. We have to reopen. We can’t stay at home and outlast the coronavirus until we get an effective vaccine.” 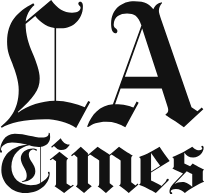 Getting to the beach may be more problematic than how people behave on the beach, he said.
“I know that on the East Coast some of the difficulties they’ve had is not the beach itself so much,” he said. “It’s the parking lots where things get very crowded and there is a tendency for friends to gather and talk. And, of course, you violate the six-foot rule.” 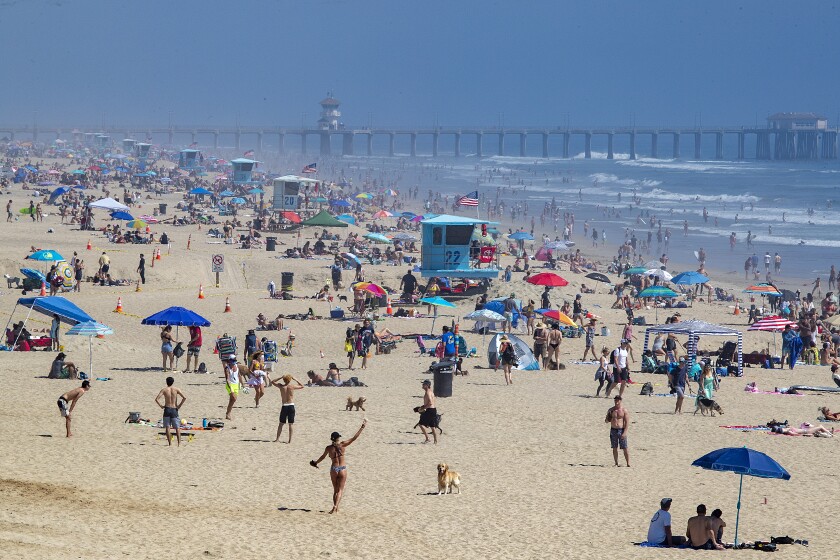 CALIFORNIA
Despite region’s first big heat wave, most Los Angeles County residents avoid beach on Saturday
April 25, 2020
Communities in the Bay Area have cracked down on those who violate the rules. Last week in San Mateo County, officials ordered 275 people off Linda Mar Beach and threatened arrests and citations if people continued to violate the order.
Polls have found wide support for the stay-at-home order among Californians. Among those polled for a recent California Health Care Foundation/Ipsos survey, 75% wanted the order to continue as long as needed. Only 11% wanted to stop the stay-at-home order, while 13% had no opinion.
L.A. County Supervisor Sheila Kuehl said in a statement that the “unprecedented” efforts to keep people inside and away from others were working, leading to a manageable growth in coronavirus cases.
“But just as we absolutely can’t stop taking a course of antibiotics just because we feel better, where this virus is concerned, we really have to keep doing the right things,” she said. “Cases are still on the rise, and this was California’s deadliest week since the start of this pandemic.”
Yet amid the heat wave, the ocean beckoned to many. Authorities kept a number of beach parking lots closed and were out in force trying to impose social-distancing rules.
One sunbather from the San Fernando Valley, who declined to give her name, said she drove to Ventura County to do what Southern Californians often do when the mercury rises.
“It’s hot,” the Canoga Park resident said. “It’s the go-to thing to do if you live in California.” 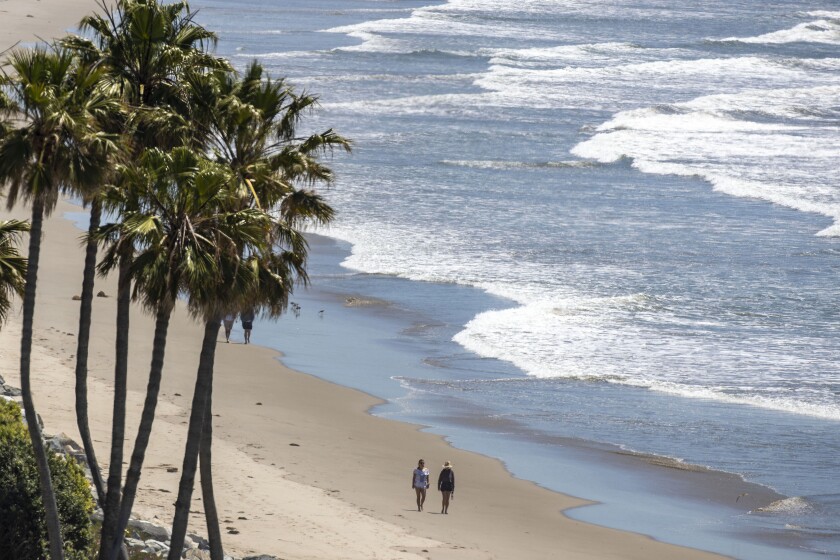 CALIFORNIA
First big heat wave of the year hits Southern California and L.A. County beaches are closed
April 24, 2020
Although few people — including the lifeguard and police officers — wore masks, most observed social-distancing rules, reminded to stay six feet apart by a flashing road sign outside Santa Buenaventura State Beach.
At the north end of the beach, several dozen surfers fought their way atop 3- to 4-foot swells. By midafternoon, with the beach largely emptied, Robin Hoag and Paige Leichtnam made their way over from their nearby home.
They have been hiking county trails and riding their bikes to work since their favorite beach was closed last month, but they waited for the visitors from L.A. County, where beaches are still closed, to leave before coming back Saturday to play paddle ball.
“It’s pretty laid-back now,” Hoag said. “People will go wherever it’s open.”
Ashley Bautista, public information officer for Ventura County, said there was a law enforcement presence at all of the county’s beaches, and officers were informing visitors that they were only supposed to walk, run, swim or surf. Beachgoers were complying, and beaches were not packed, she said.
“We appreciate that our community members are making these sacrifices,” she said, “and that local law enforcement is focused on education for compliance.” 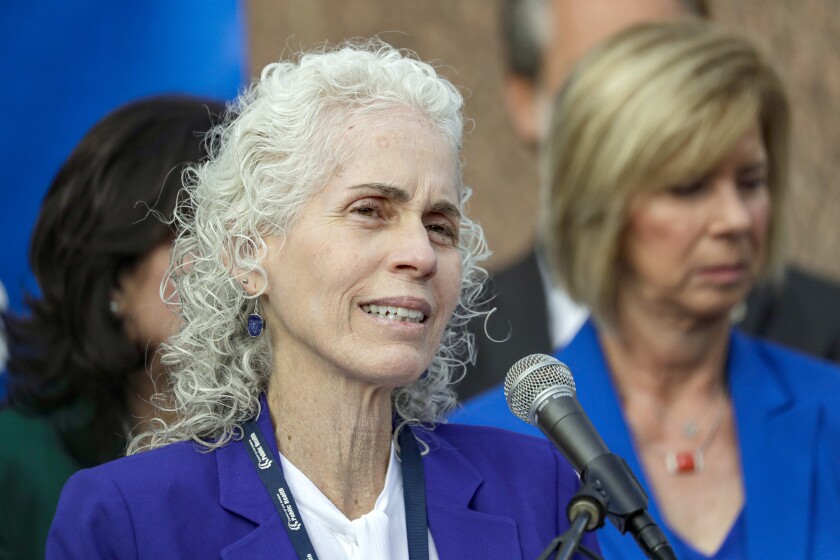 CALIFORNIA
L.A. County reports 18 new coronavirus deaths, says poor people are three times more likely to die
April 26, 2020
The number of deaths in L.A. County doubled over the last week to nearly 900. That has prompted health officials to urge residents to stay home whenever possible.
“We have high rates of illness and a lot of people in our county who are dying. We know it’s best right now for us Angelenos to stay home, or stay outside [in] your own yard or your own neighborhood,” Los Angeles County health director Barbara Ferrer said last week.
Meanwhile, an autopsy report obtained by the San Francisco Chronicle has shed new light on the earliest U.S. death attributed to COVID-19.
Patricia Dowd, 57, of San Jose, died Feb. 6 after suffering flu-like symptoms. An autopsy revealed that she suffered a heart attack that caused her heart to rupture, and signs of infection were also found in her trachea, lungs and intestines, according to the Chronicle.
Dowd’s death was not confirmed to be related to COVID-19 until last week, when Santa Clara County officials told her family that she had tested positive.
County Health Officer Dr. Sara Cody said the Feb. 6 death and two others in the county found to be linked to COVID-19 — one Feb. 17 and another March 6 — were evidence that the coronavirus arrived in the Bay Area far earlier than expected and spread. Previously, the first documented fatality was outside Seattle on Feb. 29.
“As the Medical Examiner-Coroner continues to carefully investigate deaths throughout the county, we anticipate additional deaths from COVID-19 will be identified,” the county said in a statement.
Amid the shifting timeline of the virus’ spread, Gov. Gavin Newsom said last week that most of the six milestones he set to consider loosening the stay-home order he issued last month had not been met. The only change the governor has made is to allow some elective surgeries to again be scheduled in hospitals, citing sufficient capacity.
“It will be those indicators that drive our decision-making,” he said Thursday. “Not dates. We don’t debate dates. We look at the facts objectively.”
The six milestones include the ability to closely monitor and track potential cases; prevent infection of high-risk people; prepare hospitals to handle surges; develop therapies to meet demand; ensure schools, businesses and child-care facilities can support social distancing; and develop guidelines for when to ask Californians to stay home again if necessary.
On Friday, Newsom said, “We will consider local conditions” when deciding when to ease the rules. “We will consider those things not only from the perspective of the spread of the virus, not only from the perspective of the number of deaths and trend lines, but also in terms of our broader capacity.” 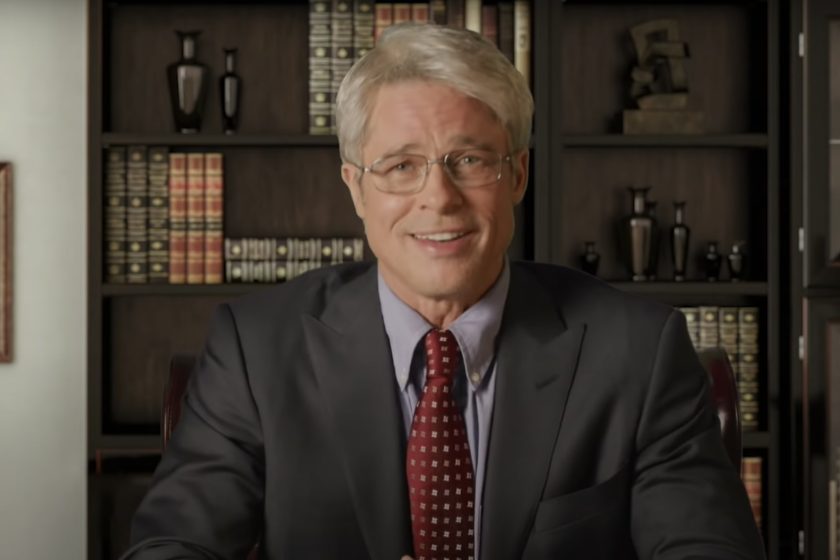 Newsletter
The stories shaping California
Get up to speed with our Essential California newsletter, sent six days a week.
You may occasionally receive promotional content from the Los Angeles Times.

Kevin Baxter
Kevin Baxter covers soccer for the Los Angeles Times, where he has worked for 23 years.

MORE FROM THE LOS ANGELES TIMES
CORONAVIRUS
SUBSCRIBERS ARE READING
Posted by Cabecilha at 4:54:00 PM 1 comment: