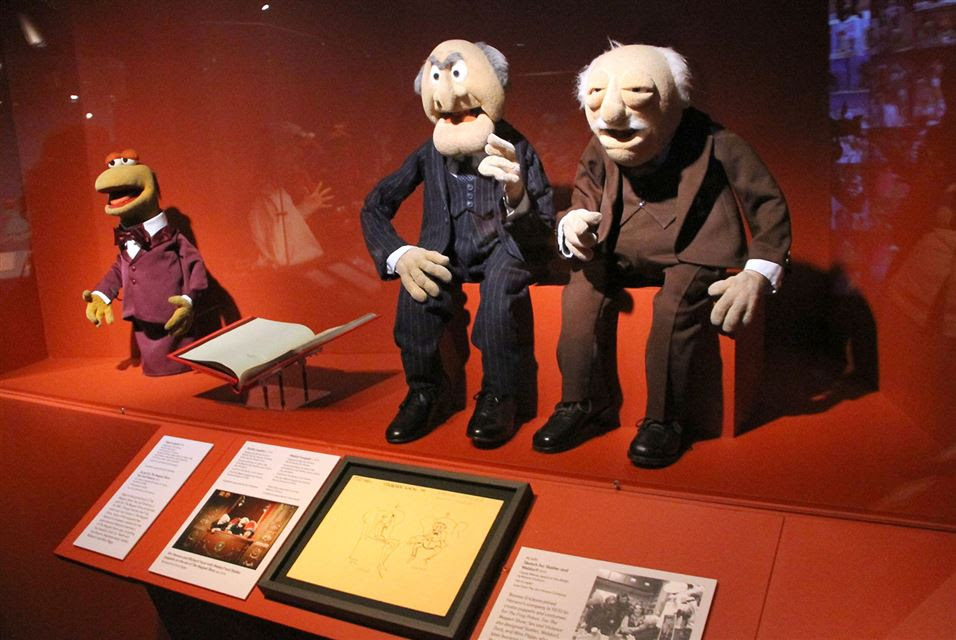 Artifacts on display during the Jim Henson Exhibition ribbon cutting at Museum of the Moving Image on July 20, 2017 in the Queens borough of New York City. Donna Ward/Getty Images/AFP
Posted by Cabecilha at 7:47:00 PM No comments:

Become an Art World Sensation in This Addictive Video Game

Become an Art World Sensation in This Addictive Video Game

ARTSY EDITORIAL
BY ISAAC KAPLAN
Make art, sell art, get reviewed. That’s the basic formula familiar to both starving artists and those showing at blue-chip galleries. The journey from rags to riches is often grueling and full of hardship—unless, that is, you’re playing the new video game Passpartout.
In this enchanting art-world simulator, released last month, you play the titular character, creating virtual paintings; in my case, they generally involved a series of brightly colored squiggles. The next step is to try and sell these masterpieces to discerning (and often quite rude) collectors. With any luck, you hock enough canvases to pay off your bills—including for what the game deems artist-required expenses, such as wine and baguettes. Time goes on—at some point, a spindly critic comes to review your work—and you progress from a humble, dingy garage all the way up the art-world ladder. Ultimately, your version of the storyline depends on the art you create.
Developed by Sweden-based Flamebait Games, Passpartout is partly a light-hearted satire of the art world (hipsters stopped buying my work once I got too popular). But it has also provided a platform that genuinely empowers players to be artistically creative. Gustav Rosberg, a graphic artist at Flamebait, describes the core of the desktop computer game succinctly: “You have a Microsoft Paint set of tools, and then people come and criticize your work.”
But that simple premise launched Passpartout to unexpected creative and financial success. It’s been downloaded 70,000 times and spawned numerous YouTube videos tracking players’ individual travails through their personal art worlds. Virtual painters have shared countless posts of their creations on Steam (a platform distributing the game), ranging from Starry Night riffs to memes.
While Passpartout lets you moonlight as a starving artist without actually going hungry, it isn’t for the entirely faint of heart. The collectors in the game can be ruthless. One work I toiled over—an urban nightscape—was so roundly rejected that I had to pull it down from the wall in defeat. “You made a painting but you didn’t make art,” was a harsh, and common, review from my digital gallery visitors. Things turned around when I made an imitation of a Damien Hirst spot painting, which was gobbled up for $100 by Steve, one of my earliest and most loyal collectors.
What determines if a collector buys your work? For one thing, it’s their personality. Different collectors have different tastes, just as some offer more money for your paintings than others. While Steve kept coming back for more, I was routinely shunned by another would-be purchaser with spiky hair and a punk vibe. I struggled to make something that appealed to her. Eventually a sharp piece in red and yellow, titled Angry, did the trick.
But she and Steve paled in comparison to the critic, resembling Beetlejuice, who periodically reviews your work as you progress through the game’s three-act structure. There are numerous different story outcomes—you can wind up as the next Andy Warhol, or a stuffy, aristocratic painter, says Rosberg. That’s mirrored by the soundtrack throughout, created by Synkronosaurus, which “is written to fit the type of art you’re doing.” he adds.
Rosberg doesn’t want to divulge how, exactly, the game evaluates your artworks. He does deny some wild speculations that the program involves neural-networks and advanced A.I. “You don’t need something incredibly complicated to give the feeling that people in the game have different preferences,” he says, noting that the game’s algorithms respond to various factors: the distribution of color blocks in a composition, for instance, or the number of brushstrokes.
That there would be no such thing as universally-acknowledged “good” art was a conscious decision on the part of the five-member Flamebait team over the course of Passpartout’s year-long development. “A lot of people ask, ‘How do I paint the best art that everyone will enjoy?’” Rosberg explained. “But you can’t please everyone.” It’s yet another way Passpartoutaccurately captures the realities of the notoriously fickle art world.
—Isaac Kaplan

Katherine Cusumano
July 20, 2017 9:33 am
Behind-the-scenes imagery from the 2018 Pirelli Calendar by Tim Walker
Alessandro Scotti
Alice of Alice in Wonderland has been reimagined many times over—actors like Natalie Gregory, Mia Wasikowska, and Tina Majorino have all taken a stab at the Lewis Carroll heroine—but rarely is she depicted as anything other than the pale, blonde English rose most famously depicted in the Disney animated film.
But that changes with the 2018 Pirelli Calendar, photographed by fashion photographer Tim Walker, styled by Edward Enninful, editor of British Vogue and the former fashion director of W, and cast by Piergiorgio Del Moro. For this year’s calendar, a star-studded product once best-known for its highbrow pin-ups, Enninful and Walker recruited a cast of actors, musicians, and models of color to star in their reimagining of Alice’s Adventures in Wonderland. Newcomer Duckie Thot plays the title role of Alice, swaddled in lace and silk in powdery colors. She’s surrounded by Oscar winner Lupita Nyong’o as the Dormouse, model Slick Woods as the Mad Hatter, actress Sasha Lane as the Mad March Hare, RuPaul as the Queen of Hearts and Djimon Hounsou as her king, and model Adwoa Aboah as Tweedledee—and that’s just the start. (Pause for a breath.) Model and artist Wilson Oryema, actor and comedian Whoopi Goldberg, rappers Lil Yachty and P. Diddy, lawyer and model Thando Hopa, and supermodel Naomi Campbell also feature in the images—a veritable cross-section of the gorgeous, groundbreaking artists of color, across generations and national borders, working today.
GO BEHIND THE SCENES OF PIRELLI'S ALICE IN WONDERLANDFANTASIA WITH P. DIDDY, NAOMI CAMPBELL, AND RUPAUL
PreviousNext
1/14
P. Diddy and Naomi Campbell as the executioners behind the scenes of the 2018 Pirelli Calendar shoot with Tim Walker.
FULL SCREEN
“The story of Alice has been told so many times and in so many ways, but always with a white cast,” Walker told the New York Times. “There has never been a black Alice, so I wanted to push how fictional fantasy figures can be represented and explore evolving ideas of beauty.”
As The Guardian points out, this season has been among the most progressive yet for diversity on and off the runway. The Fashion Spot reported earlier this year that every runway at New York Fashion Week, for the first time ever, featured at least one model of color, while Gucci featured an all-black cast in its Malick Sidibé-inspired Pre-Fall 2017 campaign. And Enninful, who was born in Ghana and raised in the United Kingdom, has championed diversity throughout his career: “If you put one [non-white] model in a show or in an ad campaign, that doesn’t solve the problem,” he told The Guardian earlier this year. “We need teachers in universities, we need internships, we need people of different ethnic backgrounds in all parts of the industry. That really is the solution.”
While some aired concerns that Pirelli was simply paying lip service to diversity with its new calendar, it doesn’t change the final product: that, as Hopa told the New York Timesin the same story, “if Alice looks differently here, then Alice can be anybody. Your value comes from far more than the narrative that someone else gives you.”