Collectors Reveal Their Mentors and Inspirations

Jack Whitten, The Eighth Furrow, 1973, in the collection of Pamela J. Joyner and Alfred J. Giuffrida.
COURTESY ALEXANDER GRAY ASSOCIATES, NEW YORK
This past summer, we asked everyone on the ARTnews “Top 200 Collectors” list to share the names of the people who inspired them to begin collecting. Their answers ranged from major museum directors to some of art history’s greatest patrons.

Agnes Gund.
©2013 TIMOTHY GREENFIELD-SANDERS
Few made as great of an impression on the “Top 200” collectors as Agnes Gund, president emerita of the Museum of Modern Art and a fixture of ARTnews’s list. Earlier this year, Gund sold a $165 million Roy Lichtenstein painting (to another “Top 200” collector, Steven A. Cohen) to help start the Art for Justice Fund, which will put money toward reducing mass incarceration in America. “Not only a friend to artists and the institutions presenting them, Aggie has also dedicated herself to arts education, and [has] just now used her collection and position to underscore the problems of mass incarceration,” Estrellita and Daniel Brodsky told ARTnews. JK Brown and Eric Diefenbach likewise cite Gund as an inspiration for their collection.
Gund isn’t the only “Top 200 Collector” to serve as inspiration. Susan and Leonard Feinstein said they continue to look to the collections of the Eisenberg Family, although that’s hardly surprising, considering that Leonard Feinstein and Warren Eisenberg cofounded Bed Bath & Beyond together. And Qiao Zhibing, the founder of the Tank Shanghai museum, said he collects with Karen and Christian Boros and the Rubell Family’s habits in mind, as well as those of the late Swiss collector and art dealer Ernst Beyeler, who cofounded Art Basel in 1970 and whose museum, the Fondation Beyeler, continues to produce some of Europe’s most thoughtful exhibitions.

Peggy Guggenheim arranging Alexander Calder’s Arc of Petals (1941), Greek Pavilion, Venice Biennale, 1948.
©SOLOMON R. GUGGENHEIM FOUNDATION, NEW YORK, ALL RIGHTS RESERVED/ ARCHIVIO CAMERAPHOTO EPOCHE, GIFT, CASSA DI RISPARMIO DI VENEZIA, 2005
Some collectors look to historical patrons for inspiration. For Patrizia Sandretto Re Rebaudengo, Peggy Guggenheim, the New York heiress who built an impressive collection of modern art that now resides in Venice, served as a model to follow. Guggenheim was involved in the avant-garde circles of Paris during the 1930s, and was at one time married to Max Ernst. Re Rebaudengo, who started a foundation to support contemporary artists and has a private museum in Turin and another foundation to come in Madrid, many of whom she collects, called Guggenheim “a mythical figure . . . for her passion, her insight, her direct connection to artists.”
Andrea and José Olympio Pereira pointed to their friend Gilberto Chateaubriand, whom they described as “the greatest collector Brazil has ever had” and who was listed on the ARTnews “Top 200 Collectors” between 1992 and 2007. Diane and Bruce Halle cited Marieluise Hessel, the founder of CCS Bard museum, whose collection of art made since 1960 forms the foundation of the museum’s permanent collection. Julia Stoschek named the German collector and arts writer Harald Falckenberg as a source of inspiration.
Often, collecting—or, at the very least, art appreciation—runs in the family. Florence and Daniel Guerlain told ARTnews that Jacques Guerlain, the French perfumer whose wealth they inherited, once owned an impressive collection of “the artists of his time,” the Impressionists. They added, “We choose to do the same by collecting the artists of our time.” Nadia Samdani wrote of her father who collected modern Bangladeshi art. “I have lived surrounded by art all my life and grew interest from my childhood,” she said.

Ciprian Muresan, All images from a Book on Dora Maurer, 2015, in the collection of Florence and Daniel Guerlain.
ANDRÉ MORIN/COURTESY DAVID NOLAN GALLERY, NEW YORK
Dimitris Daskalopoulos told of his “two enlightened uncles,” who took him on a tour of Europe, where he had his “very first art epiphany” when he was 12 years old. At the Alte Pinakothek in Munich, Germany, Daskalopoulous was mesmerized by paintings by Peter Paul Rubens, staring at his masterpieces for two hours. Thomas Olbricht mentioned his great-uncle Karl Ströher, who accrued a renowned collection of Pop and Minimalist art, though he added, “But I think I was born a collector. I started collecting stamps at the age of five and still do now.” Bob Rennie often thinks of his mother when he collects. He recalls her making decisions such as “which Robert Wood print from Sears she would acquire and the big decision between wood frame or gold.”

Raymond J. McGuire, left, artist Lynette Yiadom-Boakye, and Thelma Golden.
RAY A. LLANOS/COURTESY THE STUDIO MUSEUM IN HARLEM
But who better to point a collector in the right direction than a curator? Pamela J. Joyner said that when she was at Harvard Business School getting her M.B.A., Lowery Stokes Sims, the first black curator at the Metropolitan Museum of Art, kicked off her interest in collecting. She “advised me to buy art once my career was established,” Joyner said. “That started me on a hobby that quickly morphed into a mission: to help reintroduce the long line of African-American painters who have produced great work while being overlooked by the art establishment. . . . Years later, when I had the resources, I called Lowery and asked her how to do it.” Sims later became president at the Studio Museum in Harlem, where Thelma Golden is currently director and chief curator. The Studio Museum’s board chairman, Raymond J. McGuire, and his wife, Crystal McCrary, said that it’s Golden who has continued to inspire their collection.
Barbara and Aaron Levine said San Francisco Museum of Modern Art director Neal Benezra has guided them, and Norah and Norman Stone described John Caldwell, a curator at SFMOMA who died in 1993, as “one of our first and most important inspirations.” Meanwhile, on the European front, Nicholas Serota, the former director of Tate in London, has influenced Londoner Anita Zabludowicz.

A Sol LeWitt drawing in the home of Michael Ovitz.
WILSON CHANG/COURTESY OVITZ COLLECTION
Some collectors cited places and things, rather than people, as inspirations. “[It’s] not a person,” Donald B. Marron said, “but a visit to the Cubist room at the Museum of Modern Art in New York” that kicked off his interest in collecting. Michael Ovitz likewise credited museum-going. “I never went to a museum until I was 18 years old,” he said. After taking an art class at UCLA, he knew he had to change that. “When I was 18, I made my first trip to New York City and I went to the Museum of Modern Art, and I went there three times in two days. I had never seen anything like it in my life.”
Iris and Matthew Strauss trace their collecting habits back to a single work they saw at the Museum of Contemporary Art San Diego in California: Jennifer Bartlett’s Rhapsody (1975–76), a work they said contains “every kind of iconography the mind can imagine.” “This,” the Strausses said, “was the beginning of [a] desire to collect.”
Copyright 2017, Art Media ARTNEWS, llc. 110 Greene Street, 2nd Fl., New York, N.Y. 10012. All rights reserved. 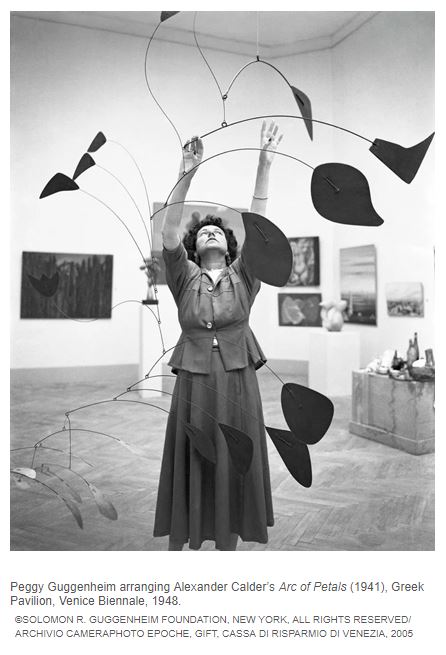 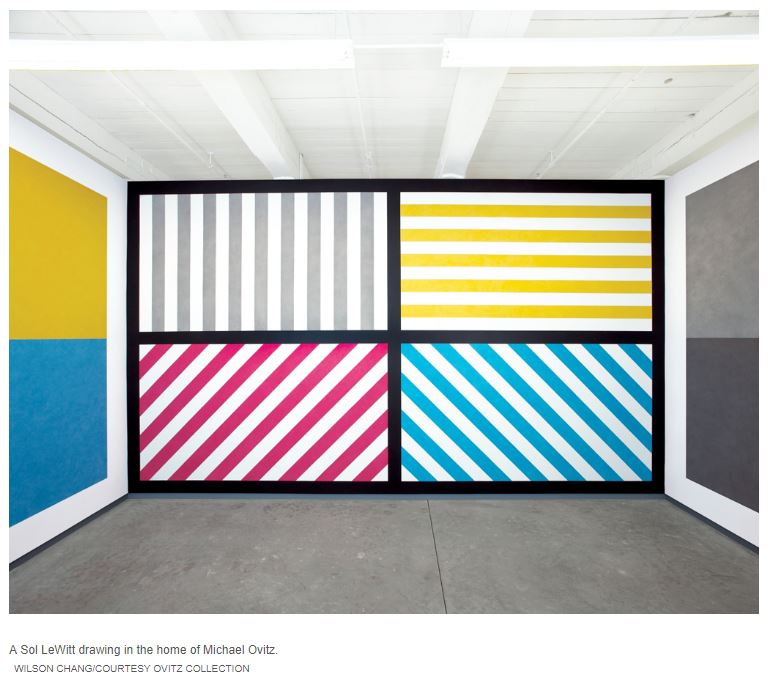 PICTURES AT AN EXHIBITION

Anthony Caro, Aurora, 2000/2003, painted steel.
STEFAN HOSTETTLER & MORITZ WEGWERTH/©BARFORD SCULPTURES LIMITED
Pictures at an Exhibition presents images of one notable show every weekday.
Today’s show: Anthony Caro’s solo exhibition is on view at the Skulpturenhalle in Neuss, Germany, through December 12. Curated by Dieter Schwarz, the show presents examples of the artist’s sculptures made over the course of his 50-year-plus career.