PrintEmailFacebookTwitter
MORE
Sotheby's concluded the New York autumn auction season with a strong contemporary art sale that saw successes for stalwarts and newcomers alike. Six works by Gerhard Richter from the Steven and Ann Ames collection—which represented the first 25 lots, all of them guaranteed—brought in a total of $63.3m at hammer, led by the perfectly composed A.B., Still (1986), which hammered for its high estimate of $30m after a protracted battle by three phone bidders.

The first lot after the Ames collection was an intimate scene by the hot young superstar Njideka Akunyili Crosby that soared past its high estimate, driven by at least six bidders, and sold for $900,000 hammer price, or $1.1m with fees.

This is over ten times her previous auction record of $93,750, which was achieved in September and already impressive for a 32-year-old artist. “She's a wonderful artist,” says the collector Mera Rubell, who showed her at the family's collection in Miami last year. “I'm happy for her. It's always nice when the artist has recognition beyond museums.” Her husband, Don Rubell, adds that the artist just had a “sensational” show at London’s Victoria Miro gallery, “the best body of work she's ever done”.

The auction took in a total of $237.4m (before fees) in a sale that was estimated to bring in $208.5m-$302m in hammer totals. This is impressive for a house that has ceded much contemporary ground to Christie's in recent years. Bidding in the room and on the phones was enthusiastic, even up until the end, as a trippy canvas by Frank Stella from 1974, Pratfall, sold for $7.7m hammer over a high estimate of $4.5m. Only four works failed to find buyers.

“The energy in the room was extraordinary,” the auctioneer Oliver Barker said at the press conference after the sale. “We've clearly dismissed any rumours that there were any problems in the market this year, lack of supply, anything along those lines. I think tonight was a kind of unbridled success and another great shot in the arm for confidence in the marketplace.”

The Ames collection was responsible for $122.7m of the evening’s total of $276.7m with premium, and a clear coup for the house.

“When they signed that collection in the summer it was very hard for the auction houses to get material,” the dealer David Nisinson said after the sale. “People were nervous and sellers didn't know how the autumn was going to be, they didn't want to take on the uncertainties: Brexit, the election, etcetera. They probably did a good deal and it guaranteed them a season because they could build around it.”


Make way for Francis Picabia, one of the grandest, most mordant exemplars of early modernism, and perhaps the least familiar. The Museum of Modern Art — having for decades drummed the artistic feats of Picasso, Matisse, Mondrian and Duchamp into cultural consciousness — has finally rolled out the red carpet for this capricious, prolific, subversive fellow traveler.

The Modern didn’t even acquire a Picabia painting until 1954, and this is its first substantial exhibition devoted to him. One imagines that the artist was too slippery or contradictory for the museum, too much of a prankster and publicity hound. Born to wealth, he never struggled as an artist and had a reputation, partly intended, as a playboy. He made important contributions to both Cubist painting and its nemesis, Dada, with its art-barbed hijinks, and refused to cultivate a personal style that deepened with time. Instead he toyed with kitsch and calendar art, and based paintings on found photographs. When he returned to abstraction at the end of his life, he tried several styles. But lately — when multiple mediums and styles are increasingly the artistic norm — Picabia’s stature has grown. His work seems more alive today than that of any artist of his cohort, even Duchamp.

Born in Paris in 1879, Picabia was the only child of a French mother and a Cuban-born Spanish father whose combined fortunes (French mercantile; Cuban sugar) meant that he never had to do anything but make art, which they encouraged. He worked as a painter, poet, graphic designer, filmmaker, set designer, publisher, editor and orchestrator of exhibitions, events and performances — some of which he helped pay for — and was also known as a lover of gambling, yachts, fast cars and speed in general, as well as women. He even seems to have painted and drawn fast, with a kind of impatient, unfussy glee. Though eminently physical as a painter, he had little time for masterly, recognizable brushwork. The exhibition includes a partial re-creation of a solo show he had in Barcelona in 1922, centering on a series of works on paper whose daunting variety makes explicit his refusal to commit.
As promiscuous in life as in art, Picabia almost always had a wife and a mistress, or two mistresses, who tended to get along. He traveled widely, spending long periods living and working in New York, Switzerland and the South of France as well as Paris, where he died, in 1953, in the house he was born in.

Picabia first became known for slightly leaden Impressionist paintings whose sincerity was regularlydebated by critics. An enormous example from 1905 dominates the exhibition’s first wall. It looks inflated and was painted from a postcard, not en plein-air, which upset Pissarro. A beautiful Munch-like landscape from 1909 hints at his talent.

Moving deeper into the Parisian avant-garde, Picabia absorbed Cubism by 1912, evolving an exceptionally muscular style. “The Spring” and “Dances at the Spring II,” both about eight feet square, have the size, impact and all-overness of post-World War II abstractions. They achieve an oxymoron, a kind of irrepressible gravity. They dispense with the niceties of Analytic Cubism — the transparencies, drifting brushwork, old master browns and delicate scaffoldings of line — for solid overlapping shapes whose radiant pinks and terra cottas seem lit from within. These abstract patchworks are at once in motion and carefully puzzled together, seeming both topographical and tapestry-like.

The tumbling shapes quickly segued into more dimensional rubbery presences suggestive of factories, science labs or the body, especially in “Comic Wedlock” and “I See Again in Memory My Dear Udnie,” from 1914. By 1915, forms had hardened into sleek, imaginary machines whose titles sometimes identified them as portraits or female bodies — hence their name, Mechanomorphs. He adapted the style of mechanical drawing, while experimenting with painting as an object, using metallic paint and enamel, adding language and bits of relief to his surfaces and paints on raw wood. In later years he would cultivate cracked paint and other effects.

The Mechanomorphs line the walls of the show’s largest gallery while vitrines of Dadaist material occupy its center, reflecting the artist’s activities from 1915 to the early 1920s, during which he abandoned painting for drawings, prints and magazines and pursued Dada first in New York, with Duchamp, then in Switzerland with Tristan Tzara, the movement’s founder, and finally in Paris.

This material is hard to summarize but rewards careful looking. The machine aesthetic continues into mechanically reproduced images for magazines like Alfred Stieglitz and Marius de Zayas’s 291 in New York; Picabia’s own 391 (named in honor of 291) and various Dada publications. There are manifestoes, fliers for events and a handbill titled “Funny Guy” in which Picabia identifies himself as “an imbecile, an idiot and a pickpocket.” A wonderful doodled drawing seems to depict barbed wire. The gallery ends with a very appealing object: “St. Vitus’s Dance (Rat Tobacco),” an empty frame strung with four lengths of cord and patches of butcher paper to accommodate the title and the artist’s signature.
Continue reading the main story
Advertisement
Continue reading the main story

By 1924, Picabia returned to painting with a vengeance, as evidenced by the last five galleries of the show. The only works that come close to the first Cubist canvases are the so-called “Monster” paintings from 1924-27. Hilariously gorgeous, even garish, these colorful, highly tactile works combine oil and enamel, are dense with dots, patterns and sartorial finery and suggest an artist thrilled to be painting again. Depicting mostly kissing couples who evoke carnivorous insects, they might be parodies of the saccharine images of Marc Chagall. Their influence runs throughout European and American painting of the 1970s and ’80s, starting with Sigmar Polke.
In the “Transparencies” series of 1927-30, Picabia shifts gears radically, smoothing his surfaces and layering together the outlines of images from the High Renaissance, popular culture and Catalan frescoes, combining Botticelli saints with half-dressed starlets. While a little wan, the linear entanglements are elegantly engrossing, and their layering and sampling of existing images are two key strategies of painting since the early 1970s.

In the next two galleries, Picabia is all over the place. “Fratellini Clown,” an especially strange image of a menacing jester, might be a collaboration between the cartoon-inspired work of Ed Paschke and the “Big Eyes” artist Margaret Keane. A portrait of Marlene Dietrich, reduced to a series of brightly layered lines, gives formal punch to the Transparencies technique. Sometimes he produced skilled hackwork, obviously on purpose: paintings of Aryan nudes or works that seem based on Hollywood publicity stills. More directly disturbing are the Goya-like “Adoration of the Calf” (1941-42), based on a photograph of a cow’s head on a cloaked pedestal by Erwin Blumenfeld, or its neighbor, “Hanged Pierrot” (1940-41). But opinion may not matter here. These works destabilize notions of good and bad, high and low, transferring some of Dada’s self-consciousness to canvas, even as his robust paint-handling signals a passion for the medium.
Picabia may play as crucial a role for our time as he did for his own. He refused to choose between the two great factions of early modernism — one conceptual and linguistic and descended from Duchamp; the other, painterly and formal, from Picasso and Matisse. (Sadly, the schism is often pretentiously played out in the show’s overly academic catalog.) He loved both subversion and the physicality of making things too much to take sides.
Anne Umland, the Modern curator who organized the show with Cathérine Hug of the Kunsthaus Zurich, the partnering institution in this effort, understands the current potential of Picabia’s art “to make us think differently about the history of modern, in a way that is more open-ended, messier, nonbinary.” In a time when too many advocates of Conceptual-based art see it as taking the high road, and judge more marketable art as taking the low, this would be an extremely liberating development. 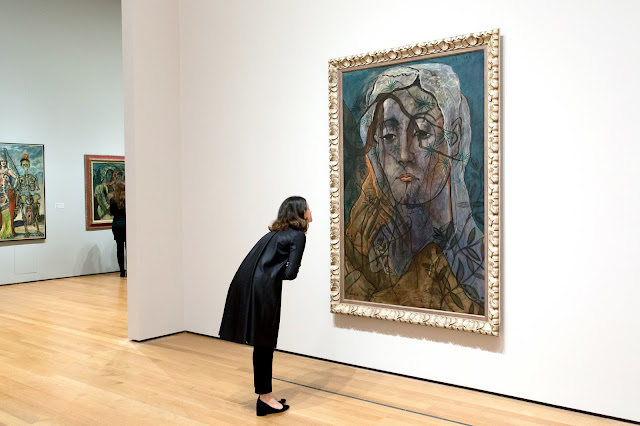 “Mélibée,” included in “Francis Picabia: Our Heads Are Round So Our Thoughts Can Change Direction” at the Museum of Modern Art.Credit2016 Francis Picabia/Artists Rights Society (ARS), New York, via ADAGP, Paris; Agaton Strom for The New York Times