Why Teach Business to Artists?


Why Teach Business to Artists? 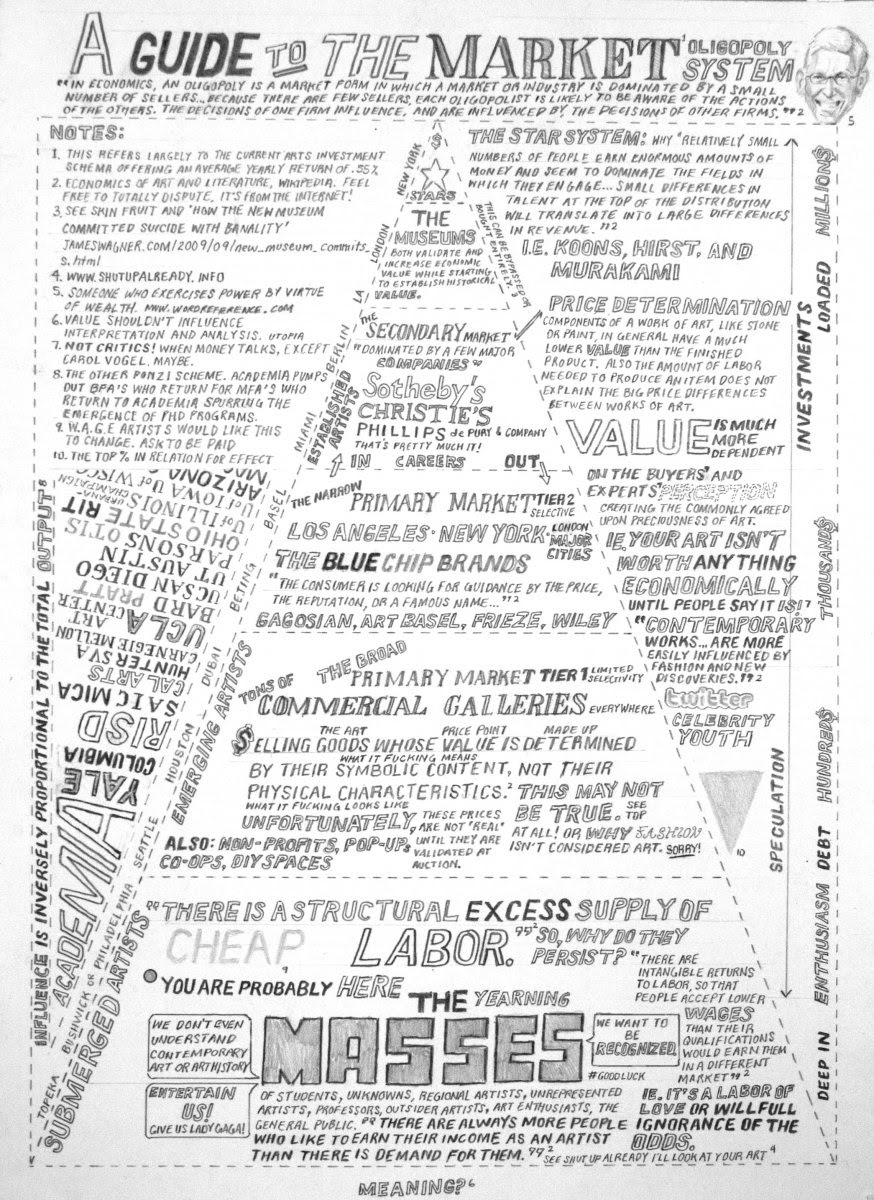 William Powhida, “A Guide to the Market Oligopoly System” (2010), graphite on paper, 11 x 14 in (courtesy of the artist) (click to enlarge)
To anyone who receives news alerts, the world might seem to have fallen apart in a wave of terrorist attacks, failed coups, wrongful killings, police assassinations, and accidental withdrawals from European coalitions, to name a few. What appear to be problems of politics and economics are actually matters of creativity and imagination. Even with the creep of the financial market into the art world, we are surprisingly cut off from our ability to diagnose and deconstruct the market with artistry and imagination. A widespread lack of understanding of the market — and its role in education, in social unrest, in campaign finance, in economic stability, in protest votes of the disenfranchised against entrenched elites — is one of the greatest threats to modern democracy.   This is why I teach business to artists, and anyone else; because the way forward is to think about business and imagination simultaneously. It’s art — as a process — as much as geopolitical rigor that can save us.
These issues are personal to me because I have both an MBA and an MFA. I believe that Excel is one of the great inventions of the 20th century, but also that the world bends to a pioneering spirit and a paintbrush. When I was getting an MFA in painting in London in 2004, MBA already in hand, I began teaching business to my fellow painters, taping the newspaper, triple-ply, to my own paintings, and using it as a blackboard. The class was not about how to market your art; it was an invitation to include people in the world of ideas about business. What I came to experience was the pleasure of seeing artists think wildly and creatively about the construction of the market itself. Putting tools of business in the hands of artists is a proxy for teaching any of us to think creatively and independently about the future of the world we live in.
I place methods of teaching business to artists into a framework of versions, from 0.0 to 3.0. They form a Maslow’s hierarchy of needs of the creative self struggling to deal with the market. At the bottom, the market is ignored, then reluctantly engaged with as a set of rules. Toward the top, the market becomes a creative medium itself — something we can build hopeful structures out of — and then a civic medium for conversation of the highest public kind — the sort that allows us to collectively build pathways forward. It is the top of this pyramid that we all need right now. (illustration by the author for Hyperallergic)
In the 0.0 version — think of it as the prequel to Business 101 — everybody pretends that business does not exist and acts in a vacuum. This attitude characterizes most education of artists up until a decade ago — the “just focus on your art as if the money part does not exist” approach. In fact, whether you are a commercial banker or a conceptual artist, the market is the ocean that we all swim in. And, to stay afloat, everyone needs a boat. That boat is built out of the tools of the market. Some people will be professional boat-builders — they will work in the market itself — but all of us still need a boat of some kind to survive.
In the 1.0 version, business is presented as a set of rules to be followed, or a secret society to be entered. For artists that means either accepting business wholesale as received wisdom — which often turns people into single-minded self-promoters — or rejecting business outright. But rejecting business means rejecting the two main things business can do in service of artists: protect space in which to make your work, and amplify the reach of your ideas.
In the 2.0 version, business is not a set of rules to be absorbed or rejected. It is a set of structural tools and building blocks that anyone can use in service of their larger, non-business lives. The goal of the 2.0 version is not to become a businessperson but to be a person who understands business. Here, business is not an identity or a belief system, but a skill — like writing or calculating or drawing.
This 2.0 version is the one that I most often teach: business as a design medium itself. Economics is a mechanical medium of cost structures and breakeven points. Finance is a time-based medium of risk and return, and money over time. Like any other medium — wood, oil paint, steel — capitalism has strengths and weaknesses. It is only by understanding those possibilities and limitations that you can use the medium well.
Far and away the greatest advantage of having an MBA, or any other education in business, is being able to trust yourself wholly when something besides the market — measurable or not — is more important. For instance, a museum might track its visitor numbers and have all the information about what exhibition brings in the most revenue, but it can still choose to host the small, mission-driven show, or champion the free event — like Olafur Eliasson’s The Weather Project at Tate Modern — that engages the public broadly and deeply, or even changes how we see art. Similarly, an artist might be able to make more money by continuing to work in a recognizable style, but decide to try something new anyway. In the same way that the perfect is the enemy of the good, the quantifiable can be the enemy of the important. Truly designing with business at this 2.0 level means including all the non-business aims in the picture.
The 3.0 version exists because our democracies are currently built out of economics as much as out of governmental structures. Or, at the very least, they are marbleized with money and charged with market oversight. If the 2.0 version invites ingenuity and resourcefulness with tools of business, the 3.0 version allows us to enter into civic conversation with each other about the collective design of market structures. This kind of conversation and the independent thinking behind it comprise the greatest levers of power in any democracy. But one needs to understand the market in order to use them.
In fact, we need all of these levels of business to operate. For the 1.0, we are all beholden to a rules-bound level of business. (Just ask the IRS or try to start a Delaware C-corp.) The reason I teach the 2.0 of business is to give artists the tools to carve out spaces in which they can explore and take risks developing new work. The 2.0 is essential because it engages people’s artistic methods — of form and composition, of material resourcefulness and curiosity — with the tools of business itself. It is this level that allows artists — or anyone else — to use business to protect space for research and development and to trumpet finished projects more widely. It is the 3.0 level that allows people to come together, to share problems and challenges we all face, to realize many of those problems are commonly held, and to join in conversations about the future of the field — be that visual art, dance, or the way we live in general.
When I teach, I often paraphrase John F. Kennedy’s 1961 inaugural address: Ask not what economics can do for you, but what you can do for economics. It is my great dream that artists — by which I mean all of us — will take on the market as one of the largest and most significant design challenges of our time.
The next time someone asks you what you think about the Brexit, or the Trump candidacy, or the economic hopelessness behind the anger that fuels fringe political movements of many stripes, take it as an invitation not just to a conversation about politics and economics, but one about creative ingenuity — art in the broadest possible sense — as a pathway forward. Visit an art museum or get out a sketchpad or take a walk and reflect. The world needs our imaginations, but it demands our facility with business, too. Understanding the mechanics of the market — with the most creative parts of ourselves — will help us to build the world we all want to live in, in the midst of the messy one we have.