Is Duchamp’s ‘Fountain’ both art and not art?

It is and it isn’t

Marcel Duchamp’s ‘Fountain’ is not just a radical kind of art. It’s a philosophical dialetheia: a contradiction that is true

A version of Marcel Duchamp’s Fountain at the Barbican Art Gallery, London. Photo by Dan Kitwood/Getty

Damon Young
is a philosopher and author. He is an associate in philosophy at the University of Melbourne, and founding faculty at the School of Life in Melbourne. His latest book is The Art of Reading (2016). He lives in Melbourne, Australia.

FollowDamon
Graham Priest
is distinguished professor of philosophy at City University of New York and professor emeritus at the University of Melbourne. His latest book is One (2014). He lives in New York. 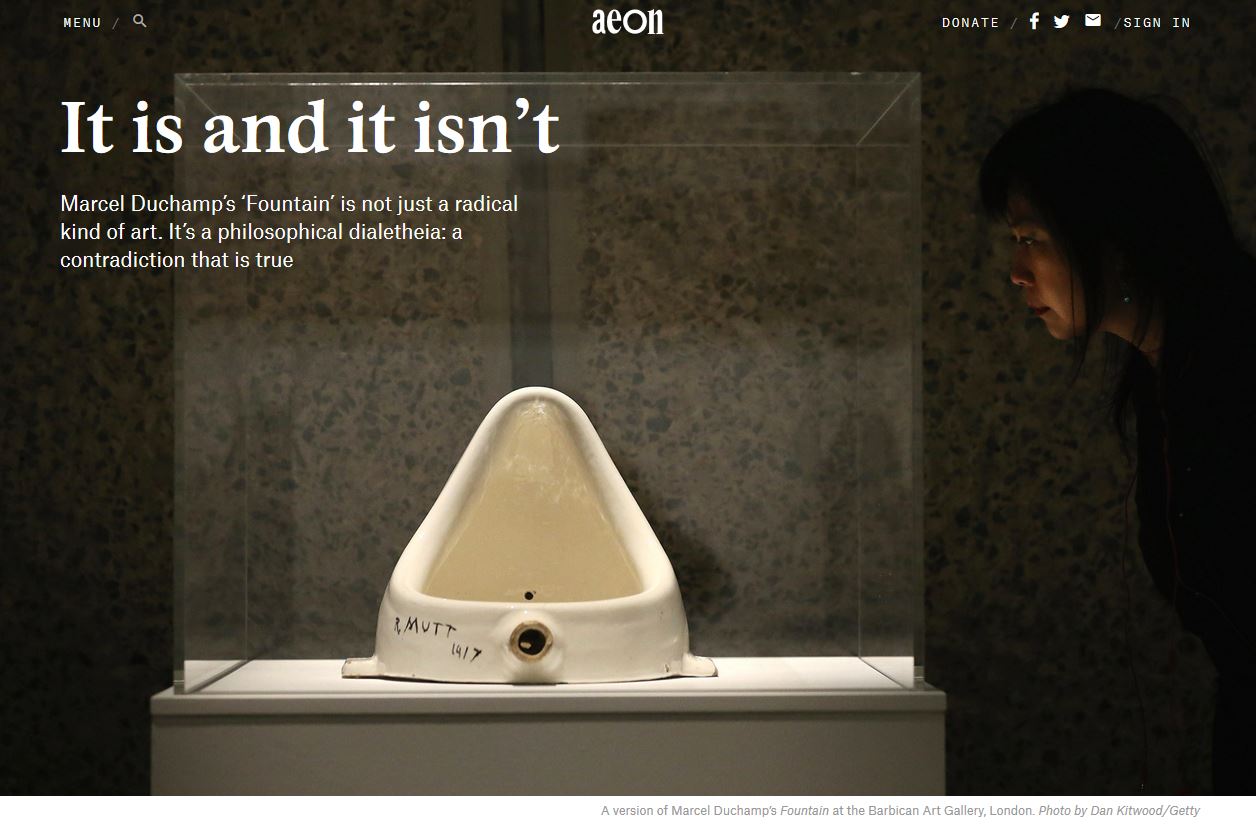 Is Duchamp’s ‘Fountain’ both art and not art?
123Responses

In 1917 a pivotal event occurred for art and philosophy: Marcel Duchamp unveiled his artwork Fountain in Alfred Stieglitz’s New York studio. This was simply a porcelain urinal, signed ‘R. Mutt’.
Fountain was notorious, even for avant-garde artists. It has become one of the most discussed works of art of the 20th century. The Society of Independent Artists rejected it, though every artist who paid the exhibition fee was supposed to have their work shown. For almost a century, it has remained a difficult artwork. The philosopher John Passmore summed up Fountain as: ‘a piece of mischief at the expense of the art world’, though many have taken it very seriously.
No doubt there was some tomfoolery involved – Duchamp did not choose a urinal randomly. Yet there is more to Fountain than nose-thumbing. What makes this artwork so striking is its philosophical contribution.
Commentators often highlight the influence of Fountain on conceptual art, and this most ‘aggressive’ readymade, as Robert Hughes put it, has certainly had an enduring legacy. In 2004, it was voted the most important 20th-century work by hundreds of art experts. From Andy Warhol to Joseph Beuys to Tracey Emin, this urinal inspired artists to reconsider the traditional artwork. Instead of paintings and sculptures, art was suddenly Brillo boxes, an unmade bed, or a light-bulb plugged into a lemon: ordinary objects, some readymade, removed from their original contexts and placed on display in art galleries. The art critic Roberta Smith sums it up this way: ‘[Duchamp] reduced the creative act to a stunningly rudimentary level: to the single, intellectual, largely random decision to name this or that object or activity “art”.’ As we will see, Duchamp’s choice was not random at all, but Smith’s description points to the broader shock that Duchamp’s work prompted: if this can be art, then anything can.
Since then, scholars have discussed Fountain to demonstrate a shift away from aesthetics to thought. As the philosopher Noël Carroll notes, it’s possible to enjoy thinking about Duchamp’s work without actually looking at it, which cannot be said for Henri Matisse’s vivid paintings or Barbara Hepworth’s dignified stone sculptures.
These traditional ideas, as we will see, are all important to Fountain. But they do not go far enough. They treat Fountain as art, but of a mocking sort: a kind of intellectual heckling that nudged artists to taunt and scoff more academically at their own field. Our explanation of the artwork’s power is much more controversial: we believe that Fountain is art only insofar as it is not art. It is what it is not – and this is why it is what it is. In other words, the artwork delivers a true contradiction, what’s called a dialetheia. Fountain did not simply usher in conceptual art – it afforded us an unusual and intriguing concept to consider: a work of art that isn’t really a work of art, an everyday object that is not just an everyday object.

If you enjoy Aeon, please show your sup