Hell Is Other People: Jean-Paul Sartre vs. Surfing

Surfing With Sartre-inspired illustrations © Nathan Gelgud
In Kicking and Screaming, Noah Baumbach’s 1995 classic of indie ennui, a character jokes to his friend that he has so little to do, he’s started writing “go to bed” and “wake up” in his day planner. The joke, of course, is that going to bed and waking up aren’t really things you have to plan on doing. Waking up and getting out of bed isn’t something you have to choose to do. 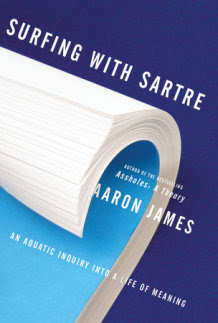 
Or is it? In his new book, Surfing with Sartre, Aaron James (author of Assholes: A Theory) makes the case that one does have to choose to get out of bed every morning. This we must do in spite of Blaise Pascal’s seemingly sound excuse for staying under the covers, his observation that “the natural misfortune of our mortal and feeble condition is so wretched that when we consider it closely, nothing can console us.”

Not only do we have to choose whether or not we get out of bed, it’s possible that we must get out of bed. Fyodor Dostoevsky wrote that “If God does not exist, everything is permissible,” and Jean-Paul Sartre expanded upon that to say that without God, there is nothing to rely on, and that we’ve been abandoned, but James thinks they’re on the wrong track. He uses “the light of surfer reason” to answer back to Pascal, Dostoevsky, and Sartre. It is “not permissible to lie in bed when the waves are pumping.” And for what reason? “Just for its own sake. Because it’s super fun. And because being attuned to a wave is sublime. And beautiful. And so a very good thing to do with one’s limited time in life.”
Throughout Surfing with Sartre, the philosophy professor and dedicated surfer James pits the deductions of philosophers against the lessons he’s learned surfing. The norms and mores of the surf subculture illuminate certain theories about economics and capitalism, and the conclusions of existentialism are challenged by the lifestyle of surfers. Even if you’d rather spend the morning reading Being and Nothingness than bobbing up and down in freezing water waiting in line for a sick wave, James hopes to convince you that there might be more things in sea and swells than are dreamt of in your philosophy.

The Metropolitan Museum of Art, CC/Wikipedia
“I stepped into the cavernous atrium, enjoying the familiar rush of silence that meets Monday’s ears,” Lucy Ives writes in her new novel, Impossible Views of the World. 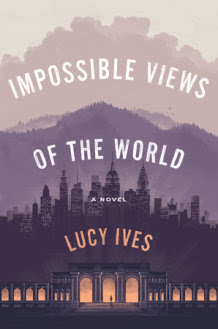 Impossible Views of the World


The speaker is Stella, a curator, and the atrium is in the fictitious Central Museum of Art in Manhattan. While the CeMArt is clearly modeled on New York’s Metropolitan Museum of Art, this opening will resonate with anyone who’s ever stepped into a museum – whether the MOMA, the Metropolitan, the Louvre, the Prado, or the Getty. You walk through the doors into another world, one (if you get there early enough) of silence and stillness, but also alive with the voices and mysteries of the past.
Perhaps this is why so many writers use museums as settings for their books. Museums contain myriad stories in their vast, climate-controlled, guard-protected galleries and halls. Some visitors trample through barely looking at the displays, their minds and stomachs fixed on the lunch they will reward themselves with after this dose of ‘culture.’ Others spend hours in front of a favorite drawing or statue, transfixed and transformed by their nearness to the past. Museums also warehouse the stories of the art and artifacts themselves: paintings that have witnessed wars, vessels that have changed hands countless times through the centuries. And finally, museums hold the stories of the men and women who, like Stella, work behind the scenes, for whom invaluable pieces of art and antiquity are backdrop to the present-tense drama of their daily lives.

Most of us probably first glimpsed the many lives of the museum in From the Mixed-Up Files of Mrs. Basil E Frankweiler, EL Konigsberg’s delightful children’s novel about a sister and brother who run away from home to the Met, and wind up solving a mystery about a possible Michelangelo. The spooky pleasure the children take in wandering the empty halls once the visitors leave and the guards lock the doors for the night is irresistible – who wouldn’t want to know what it feels like to be alone with all that art, all that history, and a full night to explore?
In fact, many people do know exactly what that feels like, though they are too busy working to do much exploring. In his oral history Museum, also set at the Met, Danny Danziger creates a portrait of what goes on behind the scenes at a major cosmopolitan museum. Danziger interviewed more than fifty staff members and key figures of the Met – everyone from the cleaners, guards, and servers to the trustees, curators, and the director himself – at the time, the imperious Philippe de Montebello. Montebello’s predecessor, Thomas Hoving, wrote a similar behind-the-scenes look at the Met, but only from one perspective: his. In Making the Mummies Dance, he describes the challenges and triumphs of his tenure."Museums contain myriad stories in their vast, climate-controlled, guard-protected galleries and halls."TWEET THIS QUOTE
One of the challenges of a museum director, of course, is keeping everyone, and everything, safe. This includes the monumental task of displaying priceless treasures in such a way that light, heat, and the exhalations of a million viewers don’t damage it beyond repair, while also keeping those viewers themselves safe. In Donna Tart’s Pulitzer Prize-winning novel The Goldfinch, a terrorist attack on the Met kills several visitors and leaves a valuable painting vulnerable to snatching, which the book’s narrator does, setting the story in motion. Unlike most books about museums, in which the galleries are hallowed, near-sacred spaces of comfort and edification, in The Goldfinch the museum becomes a chamber of horrors, a temporary prison for the hero, the wonders of its art obscured by the grisly, bloody, limb-strewn aftermath of the terrorists’ bombs.

For some writers, the idea of a museum is as appealing as the physical space. In Turkish novelist Orhan Pamuk’s The Museum of Innocence, the main character creates a traveling museum of objects that belonged to his beloved before finally, after they are separated for good, turning her house into a museum dedicated to their doomed love. While writing the book, Pamuk made plans for a real Museum of Innocence in Istanbul containing objects and artifacts from the period of the novel. Though completion of the museum was delayed until after the book’s publication, it opened to the public in 2012, four years after the novel came out. Fully incorporating the theme of museum as inspiration for a novel (and vice versa), the novel The Museum of Innocence contains a ticket which can be exchanged for free admission to the actual museum.
What all these books prove is that the job of the writer and the job of the museum-goer are not so different. Both require a willingness to look deeply, patiently, and carefully. And, as many of the writers of these books reveal, what we see on the surface is only a fraction of the story.

THE PHILOSOPHY OF PHOTOGRAPHY: SEVEN OF THE BEST QUOTES ON THE ART FORM

Like all great artists, the world’s most successful photographers rely on a combination of expert technique, artistic vision and creator’s instinct. Whether shooting documentary series, taking conceptual selfies or photographing exquisite compositions, world-renowned artists from Nan Goldin to Juergen Teller have a rare talent that cannot be learned. And the best insight into their craft often comes from the artists themselves.
So, including Andy Warhol’s words on the value of an image and Helmut Newton’s obligation to entertain, here are seven of our favourite quotes on photography.

'THE BEST THING ABOUT A PICTURE IS THAT IT NEVER CHANGES, EVEN WHEN THE PEOPLE IN IT DO.' - ANDY WARHOL

"A PHOTOGRAPH IS A SECRET ABOUT A SECRET. THE MORE IT TELLS YOU THE LESS YOU KNOW." - DIANE ARBUS

"I WENT INTO PHOTOGRAPHY BECAUSE IT SEEMED LIKE THE PERFECT VEHICLE FOR COMMENTING ON THE MADNESS OF TODAY'S EXISTENCE." - ROBERT MAPPLETHORPE

"MY JOB AS A PORTRAIT PHOTOGRAPHER IS TO SEDUCE, AMUSE AND ENTERTAIN." - HELMUT NEWTON

“I USED TO THINK THAT I COULD NEVER LOSE ANYONE IF I PHOTOGRAPHED THEM ENOUGH. IN FACT, MY PICTURES SHOW ME HOW MUCH I’VE LOST.” - NAN GOLDIN

"I CAN GET OBSESSED BY ANYTHING IF I LOOK AT IT LONG ENOUGH. THAT'S THE CURSE OF BEING A PHOTOGRAPHER." - IRVING PENN

"I DON’T LIKE TAKING A SLY PICTURE ON THE SIDE. I LIKE THE DIRECT APPROACH. I WANT TO BE AS HONEST TO MYSELF AND THE SUBJECT AS POSSIBLE. AND I’M DEPENDING ON THEIR HUMANNESS TO COME THROUGH" - JUERGEN TELLER

How These Small Galleries Are Surviving Despite Wave of Closures

How These Small Galleries Are Surviving Despite Wave of Closures