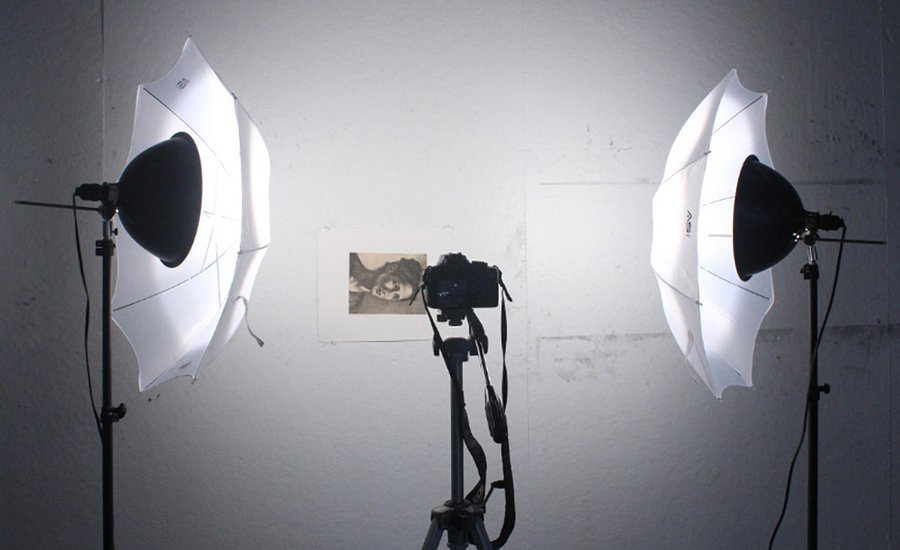 Image via amazonaws.com
Artists, let’s face it: your artwork is more likely to be seen in photographs than in real life. The internet allows us to share images of work to massive audiences online—audiences that might not have the chance to see your work in person, whether it’s in a major gallery exhibition or inside your studio. So, how you photograph your work really, reallymatters. If you’re trying to woo onlookers (and potential collectors, curators, jurors, panelists, etc.), then snapping quick pics with you iPhone likely isn’t going to cut it. But professional photographers can cost hundreds of dollars to hire—not an option for all, or probably most, artists.
If you’re taking the DIY approach to documenting your art, you’re best off procuring a digital single-lens reflex (DSLR) camera if you can. If you’re a student, you should be able to rent one out from the a/v department at your school. If you’re not, ask around to see if any of your friends have one you can borrow. Otherwise, local equipment rental companies typically offer daily rentals.
Once you’ve got your DSLR, follow the guidelines we outline below. Though you’d likely need years behind the lens to master digital photography, there are some quick tips—specifically tailored to document art—that will greatly increase your chances getting that perfect shot.

Outside vs Inside
Cloudy, overcast days provide the most ideal light for photographing a single art work. Clouds basically act like diffusers for sunlight, meaning your work won’t reflect any harsh light, or accept any pesky shadows. We recommend buying a sheet of drywall at your local hardware store and using that as your background—whether you're shooting a sculpture resting on its surface, or hanging a wall piece.
But shooting outside isn’t always an option. Weather is the most obvious issue to worry about, but you might also need to consider how many artworks you’re hoping to document. If you have eight, then each piece will be slightly differently lit, since you’ll likely be shooting the last piece minutes or even hours after you’ve shot the first one.
So, while photographing outdoors may be recommended by most professional photographers, it’s likely not practiced often by many of them. Read on for tips on how to light your work indoors.

Indoor Lighting 101
The first thing you need to do is make sure your work isn’t under multiple light sources—whether natural or artificial. No matter what type of bulbs you’re using to light your work, it’s imperative that every single light source (if there are more than one) have the exact same temperature, which is measured in Degrees Kelvin and ranges from Soft White (2700K – 3000K), Bright White/Cool White (3500K – 4100K), and Daylight (5000K – 6500K).
In laymen's terms, all you really need to know is that each bulb you use should be the same temperature. To make sure that natural light isn’t seeping into your frame from a nearby window or skylight, make sure to either shoot at night after the sun has completely set or cover your windows with opaque black-out material.
There are a seemingly infinite number of ways that you can light an artwork, but we’ll describe a couple, starting with the easiest: just use whatever overhead lighting you have in your studio. Rather than thinking about how to bring light over to your work, bring your work over to the best-lit wall. When documenting multiple wall works, photographers will often set up their camera and their lighting just once—and then use the same nail (or screw, etc) to hang each artwork, one after another. In other words, keep the camera in a static position, and all hang your pieces in the same place. This way, you know the lighting will be the same on every single one, and you won’t waste time setting up your camera for each artwork you’re shooting.
Another way to shoot your work is to place two lights (each with the same type of bulb—a “cool” household 100-watt bulb will suffice) on either side of your camera, facing the work at 45-degree angles. Rather than shining the light directly on the piece, diffuse the light to make it softer and more evenly lit. They make diffusers and umbrellas specifically for photography, but you can also just cover your light with a translucent plastic bag. (Just make sure it doesn’t melt or catch on fire!) If you’re photographing a flat surface, make sure that each bulb is the same wattage, and that they’re both equidistant from the wall. But if you’re shooting an artwork with texture, make the light source on one side a bit stronger—either by moving the light closer to the wall, or by using a higher-wattage bulb. This way, a slight shadow will be cast on one side, allowing textural detail to stand out. Oh, and remember to turn the flash off on your camera!

Adjusting White Balance
Most cameras will, by default, adjust white balance settings automatically. White balance settings control the “temperature” of your image. Ideally, you want a neutral temperature in which white parts of the image (like a white background) are actually white—not yellow or blue. When you’re camera is set to adjust white balance automatically, the settings will change depending on where you’re pointing your lens. If you’re shooting multiple works in different areas of the room, leaving your camera on auto-white balance will probably result in each image having a slightly different hue. So, it’s best to manually set your camera to stay on one particular white balance setting.
Often cameras will have preset settings like “cloudy,” “sunny,” “fluorescent,” “tungsten,” etc. Just pick whichever setting accurately describes the light source you’re using. On that setting, your images should look as neutral as possible. If they aren’t perfect, you can at least adjust them in a photo-editing software afterwords—which will be a heck of a lot easier if they’re all shot using identical white balance settings.

Tripod Tricks
Use a tripod. Don’t have one? Set your camera on a table or a stack of books—anything that gives your camera stability. But here’s another, less obvious trick: No matter what, put your camera on timer mode when you’re ready to take the shot. Even the slightest jostle from your finger touching the shutter release button could cause vibrations—and thus blurry photos. Most cameras have the option for a 10-second shutter delay (typically used to allow for “selfies”). Use it.
Secondly, make sure that the camera is positioned directly in the center of the work, and not titled or pointed up or down or side to side. You want to the lens to be perfectly parallel with the wall you are shooting, or the perspective will make your rectangle look more like a trapezoid.

Resolution
You’ll want to take your photographs in the highest resolution possible, for the clearest image. To do this, make sure the camera you’re using isn’t set to a mode that sacrifices image quality or size. If there is a “fine” option for image quality, pick that. And, don’t waste pixels by shooting from too far away from your piece. Fill the viewfinder with the piece, with a little wall space around the edges, so that the piece itself is made up of as many pixels as possible—and thus able to show the most detail. Once you have your files on your computer, you can save them at different sizes or resolutions so that they’re easier to email or upload. But always keep your original file with the highest resolution as the master file.

A Trick for Reflective Art
Ideally, the work you’re shooting isn’t behind glass. (Document it before you frame it!) But if it is, then you’re undoubtedly going to be fighting glare. Here’s a trick: grab a black or dark-colored sheet and hang it right in front of the camera. Cut a small hole to allow the lens to poke through. Voilà! No glare!

Exposure Blending
The human eye sees a much richer world, with bright lights and rich darks, than a camera lens sees. So, if you’re shooting something that has a huge contrast in values, you might have trouble capturing both in the same image. This problem might be most pronounced when say, you’re trying to document an exhibition with a video piece in it. The screen is so bright that your image either ends up looking like it’s really, really dark in the room but the video is visible, or the room looks normal but the video image is completely white. There’s a solution to this problem. But it’s not exactly uncomplicated.
Here are the basics: If you take multiple photographs with slightly different exposure settings, you’ll be able to blend them all together later on using editing software, in order to keep the best parts of each image. (Just remember not to move the camera in between shots!) There are many, many ways to blend the images together, so instead of going through each one, check out this very thorough guide.