THEY WENT SHOPPING ON THE Moon mALL :)


This is your one article preview.
Log in or create a free account to read more articles each month.
NASA reached a milestone on Friday when two Americans, tasked with replacing a power controller, ventured out of the International Space Station: the astronauts, Christina Koch and Jessica Meir, became the first to take part in an all-female spacewalk.
The walk, which lasted seven hours and 17 minutes and included a brief call with President Trump, was not purposefully planned by the agency. As NASA explained it, one was bound to happen eventually because of the increasing number of female astronauts.
But news of the milestone attracted far greater interest than spacewalks normally do, and on Friday, American officials celebrated it as a historic achievement. They pointed to the agency’s ambitious goals to put the first woman and the next man on the moon, and then to forge a path to Mars.
Live video of the spacewalk showed two figures in bulky white gear — first Ms. Koch, then Dr. Meir — working outside of the space station, which glowed against the blackness of space. The women could be heard talking to controllers, and helmet cameras showed the view as they clambered along the outside of the space station.
Such a walk was supposed to take place in March, but it was postponed because NASA did not have two appropriately sized spacesuits available. That sparked an outcry — and a “Saturday Night Live” spoof — about the legacy of sexism in the space program. For some observers, the episode underscored the challenges faced by women in fields where equipment has historically been designed with men in mind.
Women were not admitted into the astronaut program until 1978, and an American woman did not fly into space until Sally Ride did so in 1983. (Two Soviet women preceded her.) The first spacewalk took place in 1965, and in 1984, Kathryn D. Sullivan became the first American woman to perform one.
“You’re doing an incredible job,” Mr. Trump told the astronauts on Friday during a call to the space station. “This is a first step, because we’re going to the moon, and then we’re going to Mars.”
He was joined during the five-minute call by Vice President Mike Pence, NASA Administrator Jim Bridenstine and Ivanka Trump, Mr. Trump’s daughter and adviser.
He called the moment “the first time for a woman outside of the space station,” an inaccuracy that Dr. Meir gently corrected. She is the 15th woman to do a spacewalk. But until Friday, all of those astronauts had been paired with male colleagues.
“This is really just us doing our jobs,” Dr. Meir said, adding that credit was owed to the female explorers, scientists, engineers and astronauts who came before her.
Ms. Koch was scheduled to participate in the March spacewalk with the astronaut Anne McClain when it was postponed because NASA did not have two medium-sized torso components available. Ms. McClain said that she originally thought she could use a large, but when she did a spacewalk in a medium, she realized she favored that size. (Astronauts’ bodies can change in space, and a well-fitting spacesuit is crucial to complete any mission.)
Ms. McClain returned to Earth in June after 204 days in space, and Dr. Meir arrived at the space station in late September. Soon, the all-female spacewalk was back on.
Dr. Meir and Ms. Koch were initially tasked with installing lithium-ion batteries next Monday, but the timeline was hastened after a power controller failed last weekend. The duo replaced the controller, which regulates the charge to the batteries that distribute solar power to the station.

Here’s a little background about the astronauts

Both women, as well as Ms. McClain, were part of NASA’s 2013 class of eight astronaut trainees, which was the first to include equal numbers of men and women. There are now 12 female astronauts in NASA’s ranks, out of a total of 38 active ones.
Dr. Meir grew up in Caribou, Maine, according to her official NASA biography. She holds a master’s degree from the International Space University, near Strasbourg, France, and a doctorate in marine biology from the Scripps Institution of Oceanography in San Diego. She has researched human physiology for Lockheed Martin and worked as an aquanaut in an underwater habitat, among other posts.
Ms. Koch, a Michigan native, grew up in Jacksonville, N.C., and most recently lived in Livingston, Mont., according to her official biography. She holds a master’s degree in electrical engineering from North Carolina State University. Before becoming an astronaut, she worked in space science instrument development and remote scientific field engineering for NASA and the United States Antarctic Program, among other institutions.
She is on track to break the record for the longest single spaceflight by a woman, with an expected 328 days in space if she returns to Earth in February, as scheduled. Friday’s outing was her fourth spacewalk.
In an interview with NASA TV this month, Ms. Koch was asked if she was bothered that her accomplishments were often talked about in terms of her gender, or whether she believed it was important to mark milestones.
“That is something I’ve done a lot of thinking and reflecting on,” she said. “And in the end, I do think it’s important. And I think it’s important because of the historical nature of what we’re doing and that in the past women haven’t always been at the table.”
Ms. Koch added that it was “wonderful” to be a part of the space program at a time “when all contributions are being accepted, when everyone has a role, and that can lead in turn to an increased chance for success.”

So what size suits did they wear?

Spacesuits are essentially mini-spaceships, built for one of the most dangerous tasks during an astronaut’s mission. There are six aboard the International Space Station, and they are individually configured for each astronaut, taking into account more than 80 different body measurements, said Stephanie Schierholz, a NASA spokeswoman.
“The suit has three sizes of upper torso, eight sizes of adjustable elbows, over 65 sizes of gloves, two sizes of adjustable waists, five sizes of adjustable knees and a vast array of padding options for almost every part of the body,” she wrote in an email.
Both women had medium-size torso components for Friday’s spacewalk, and the two male spacewalkers aboard the station also use that size, Ms. Schierholz said.
The suits were originally designed more than 40 years ago. But NASA is developing new ones as part of its Artemis program, which aims to send astronauts to the moon by 2024, and then to Mars.
NASA officials unveiled two new spacesuit prototypes at the agency’s headquarters in Washington on Tuesday. The new suits feature advanced communications capabilities and protect astronauts from the extreme environment of space while allowing them to move with greater ease.
Jacey Fortin contributed reporting.
Read more about women in the American space program
Why NASA’s First All-Women Spacewalk Made History
Oct. 18, 2019 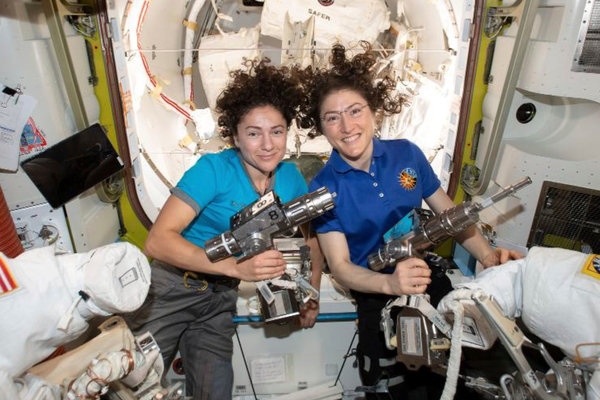 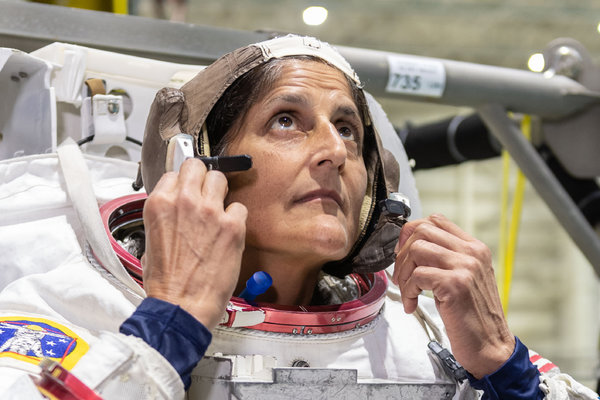 NASA’s New Spacesuits Unveiled, for Trips to the Moon and Beyond
Oct. 15, 2019 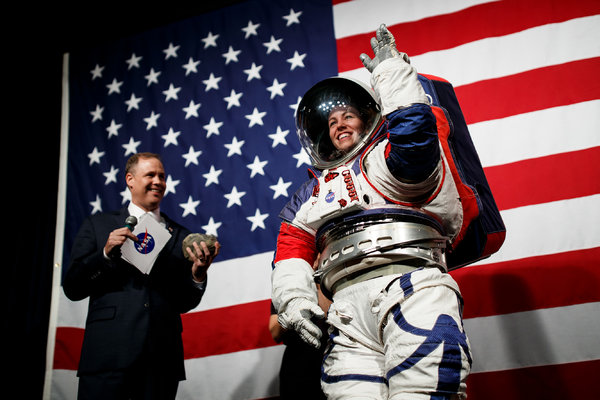 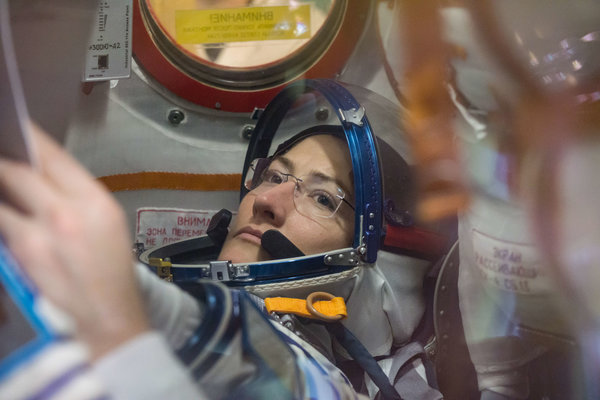 An Astronaut Who Built Paths to Space for Other Women
Oct. 2, 2019 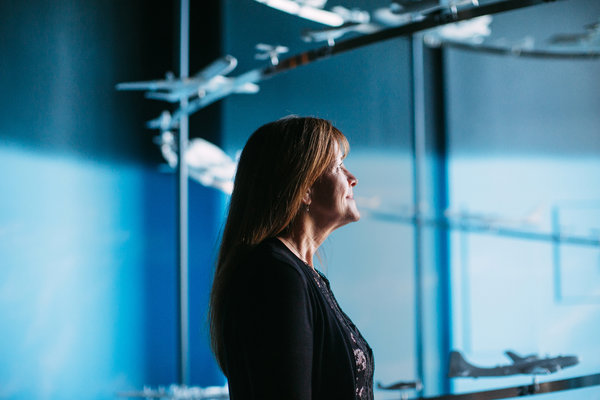 [Sign up for the Science Times newsletter for stories that capture the wonders of nature and the cosmos.]
Karen Zraick is a breaking news and general assignment reporter who writes frequently about race, gender and civil rights. She has also worked as an editor on the International desk and in news curation. @karenzraick
A version of this article appears in print on Oct. 19, 2019, Section A, Page 11 of the New York edition with the headline: Routine Repair Mission That Was Anything but Ordinary. Order Reprints | Today’s Paper | Subscribe