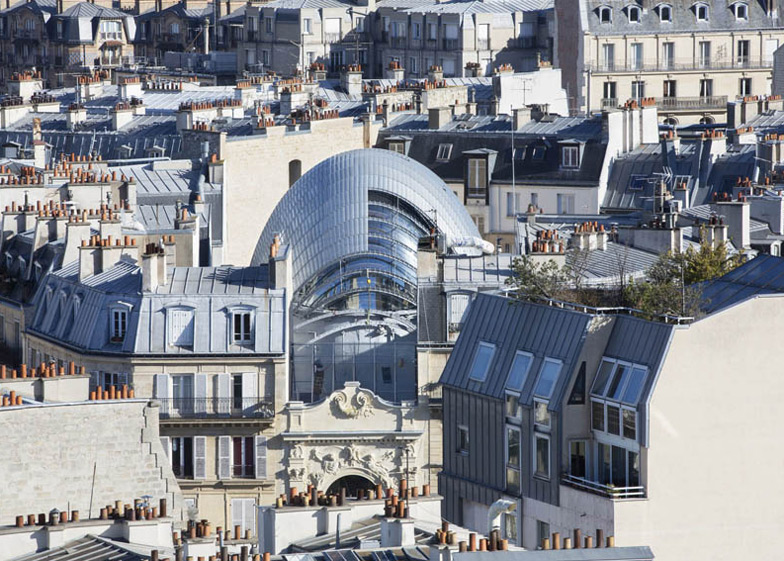 These photographs show the bulbous form of Renzo Piano's almost-complete Fondation Jérôme Seydoux-Pathé, which nestles within a Parisian urban block. 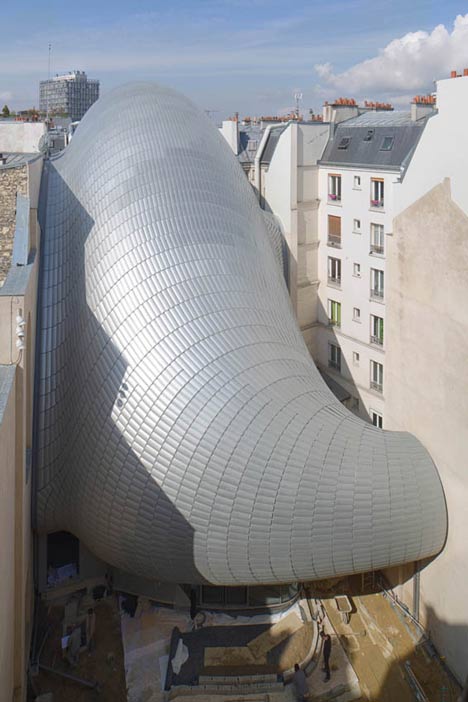 Renzo Piano Building Workshop designed the "organic creature" in the courtyard of a 19th-century block to house the new headquarters of the Fondation Jérôme Seydoux-Pathé – dedicated to preserving the history of French film company Pathé and promoting cinematography. 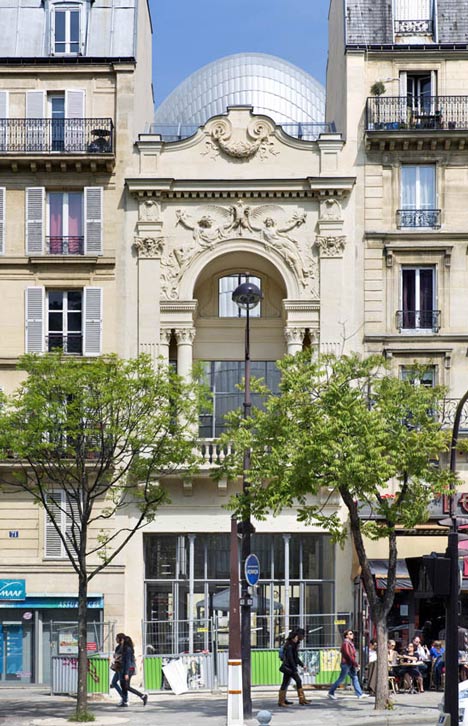 The egg-shaped form connects to the surrounding Haussmann-era buildings at four points. Its form curves away from the existing buildings and its top peeks over the roofline. 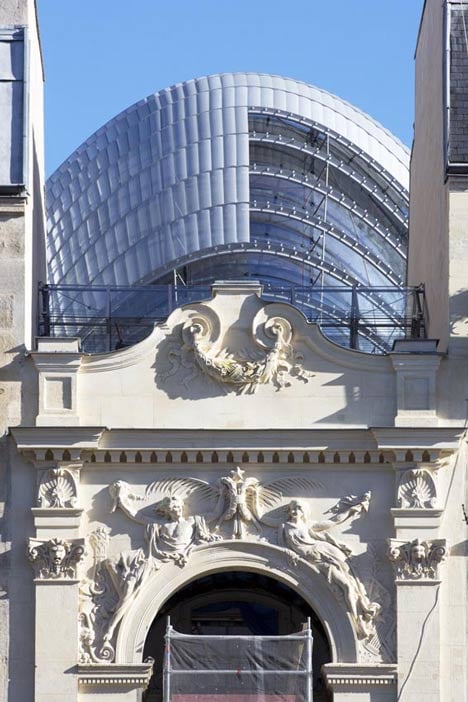 "The peculiar design of this building is determined by the site's major limits and requirements," said the workshop. "While respecting the distances with the surrounding buildings, the building improves the neighbour's access to natural light and air." 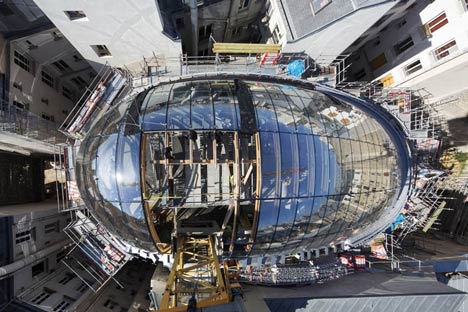 Arching engineered timber ribs guide and support the layer of curved glass panes that form the shape of the building. 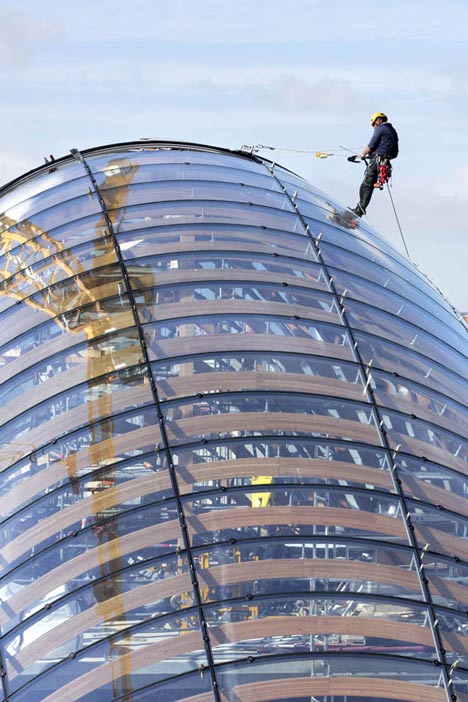 An external skin of translucent glass tiles envelops the entire structure, creating the effect of an armadillo hide over the humped form while letting softened light into the upper storeys. 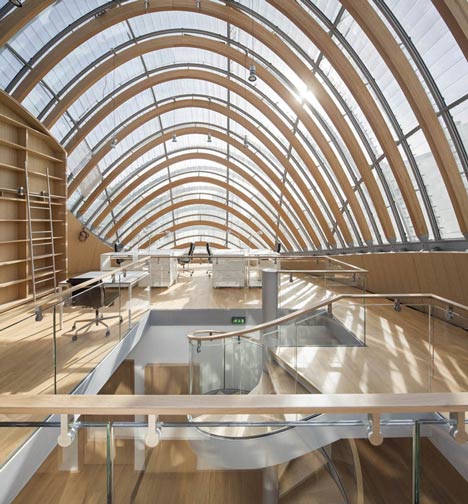 Once complete, the building will contain offices for the foundation, spaces for temporary exhibitions and the Pathé archive. 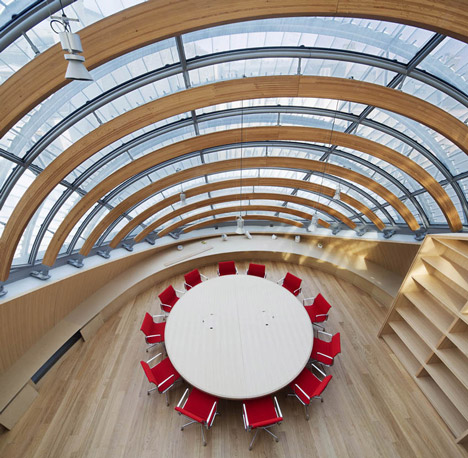 A 70-seat cinema will be installed in the basement and a planted garden will surround the base of the structure. 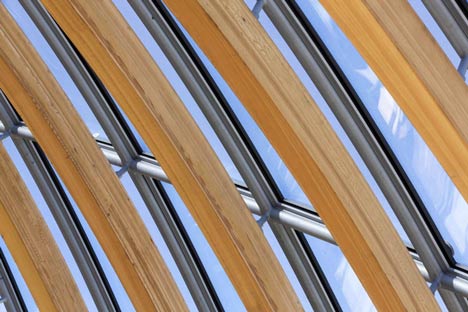 The building stands on the site of a 19th-century theatre, which was converted into one of Paris' first cinemas. Two buildings that previously stood in the courtyard were demolished to make way for the new structure. 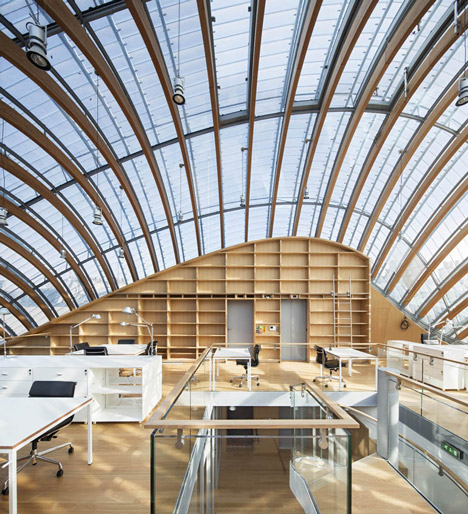 Visitors and employees will enter through the facade along the Avenue des Gobelins, which features sculptures by Auguste Rodin, and is undergoing restoration. 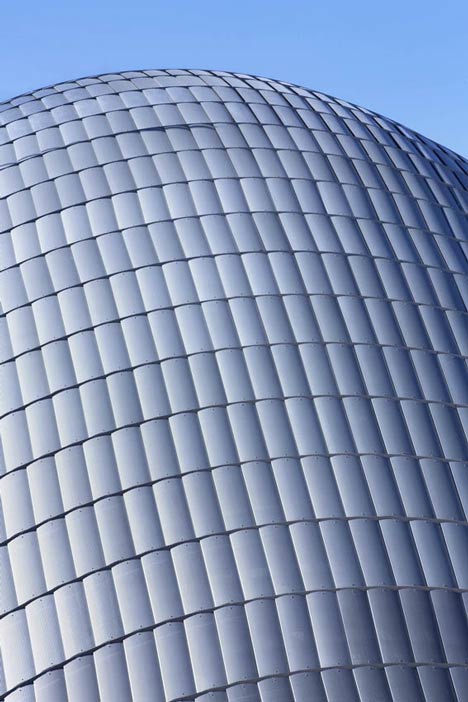 "The art of inserting a building into an historical city block means engaging in an open, physical dialogue with those already there," said the workshop. "Building onto an extant structure also presents an opportunity for a more widespread renovation project, a reclaiming of space."
Behind the stone frontage is a glass atrium, in which a metal circulation core connects to the bulbous structure via a series of bridges at the lower levels. A spiral staircase links the upper floors of the main building. 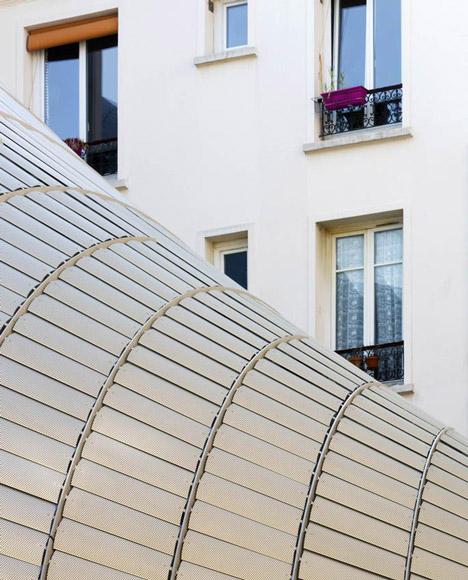 Renzo Piano Building Workshop, which also designed the Shard skyscraper in London and the extension to the Kimbell Art Museum in Texas, expects the project to complete in September. See more architecture by Renzo Piano »
Read on for more information sent by Renzo Piano Building Workshop:
Fondation Pathé
The art of inserting a building into an historical city block means engaging in an open, physical dialogue with those already there. Building onto an extant structure also presents an opportunity for a more widespread renovation project, a reclaiming of space. The new headquarters of the Fondation Jérôme Seydoux-Pathé is an unexpected presence, a curved volume one glimpses floating in the middle of the courtyard in which it sits, anchored on just a few supports. On the ground, there is a stand of birch trees, a floral island set in the dense mineral context of the city.

The Fondation Jerôme Seydoux-Pathé is an organisation dedicated to the preservation of Pathé’s heritage, and to the promotion of the cinematographic art. Its new headquarters [sits at the centre of a block in the XIII arrondissement, where an old mid-19th century theatre - transformed into a cinema (one of the first ones in Paris) in the mid-1900s and then radically transformed again in the 1960s - once stood].

The new building, [which will be finished over the next few months], will house Pathé's archives, some (spaces for temporary exhibitions as well as for the permanent collection) (including a 70-seat screening room), and the offices of the Foundation.

The project called for the demolition of the two existing buildings to create an organic "creature" that better responds to the restrictions of the site. [The idea was to respond to the functional and representative programme requested by the Fondation, while at the same time increasing the quality of the space surrounding the new building] The facade on the avenue des Gobelins has been restored and preserved, due to its historical and artistic value. Decorated with sculptures by [a young] Auguste Rodin, it is not only a historical landmark, but also an iconic building for the Gobelins area.

A new transparent building just behind the facade functions as the foundation's public access. Looking like a greenhouse, it offers a view on the interior garden through the transparent ground floor of a second building in the central court that houses the project's main functions.

The peculiar design of this building is determined by the site's major limits and requirements. While respecting the distances with the surrounding buildings, the building improves the neighbour’s access to natural light and air. By reducing the footprint, the project creates space for a garden in the back of the site.

The upper part of the building is made of glass, providing natural light for the office spaces of the Foundation.

From the street the building is only perceived through, and over, the restored facade like a discreet presence during the daytime, while it will be softly glowing at night. 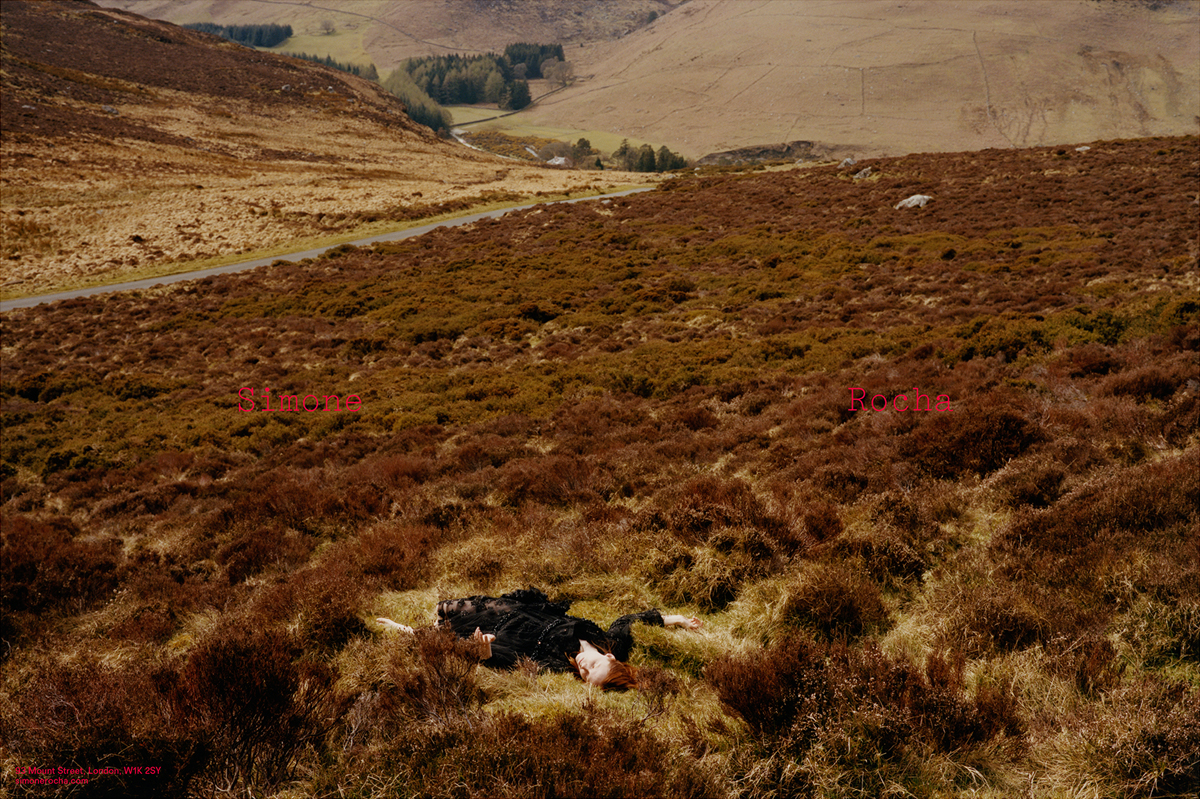 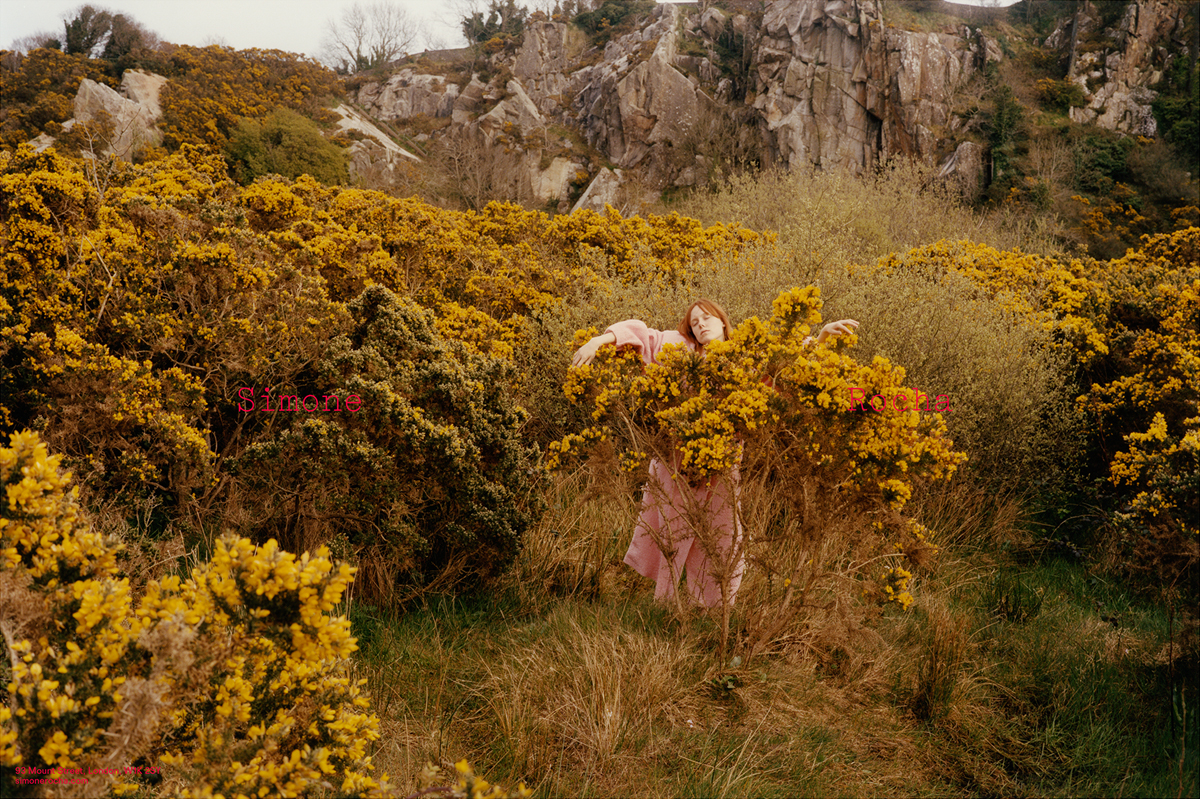 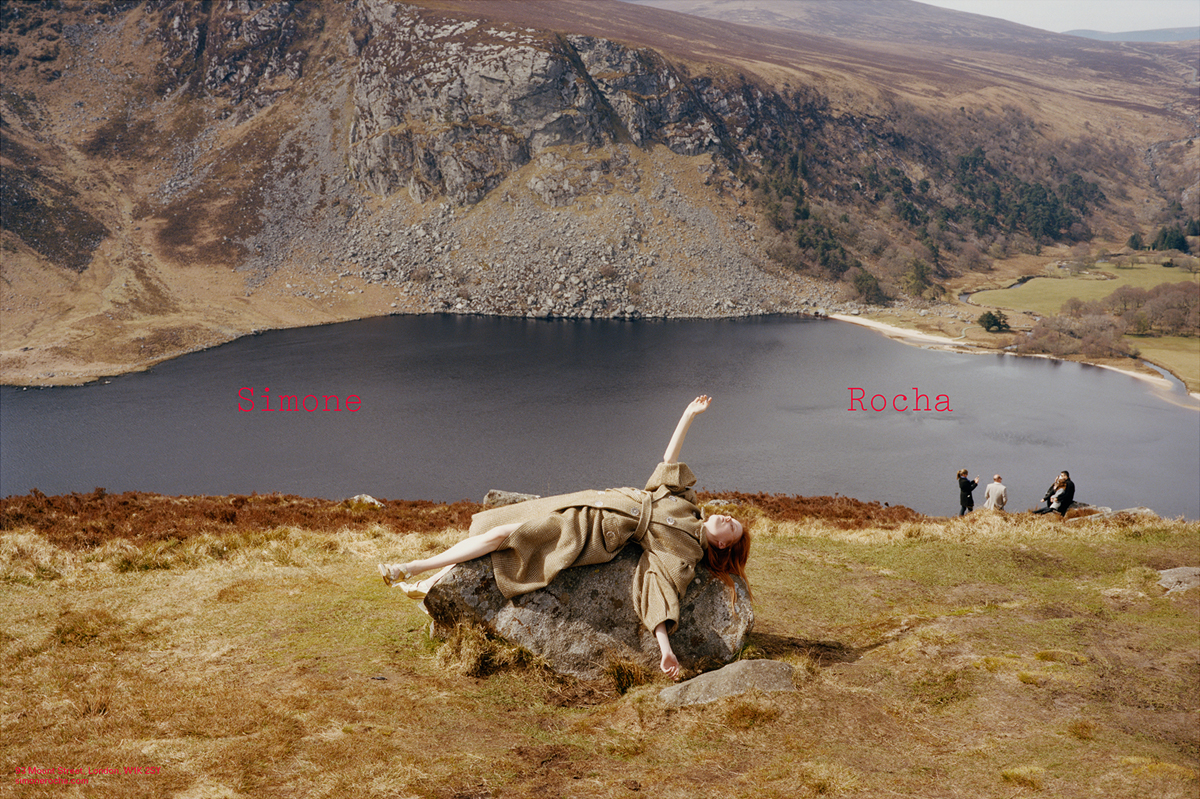