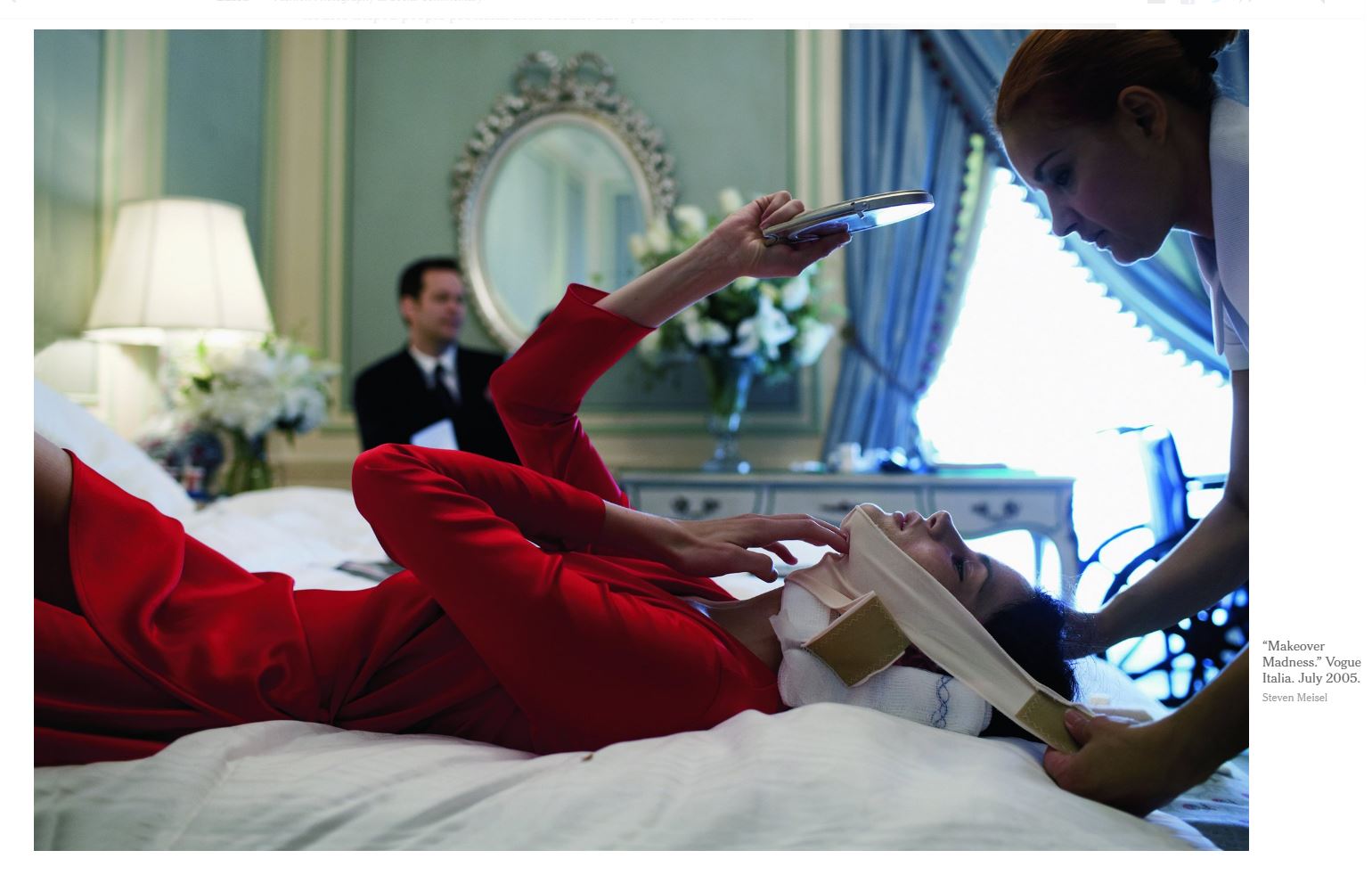 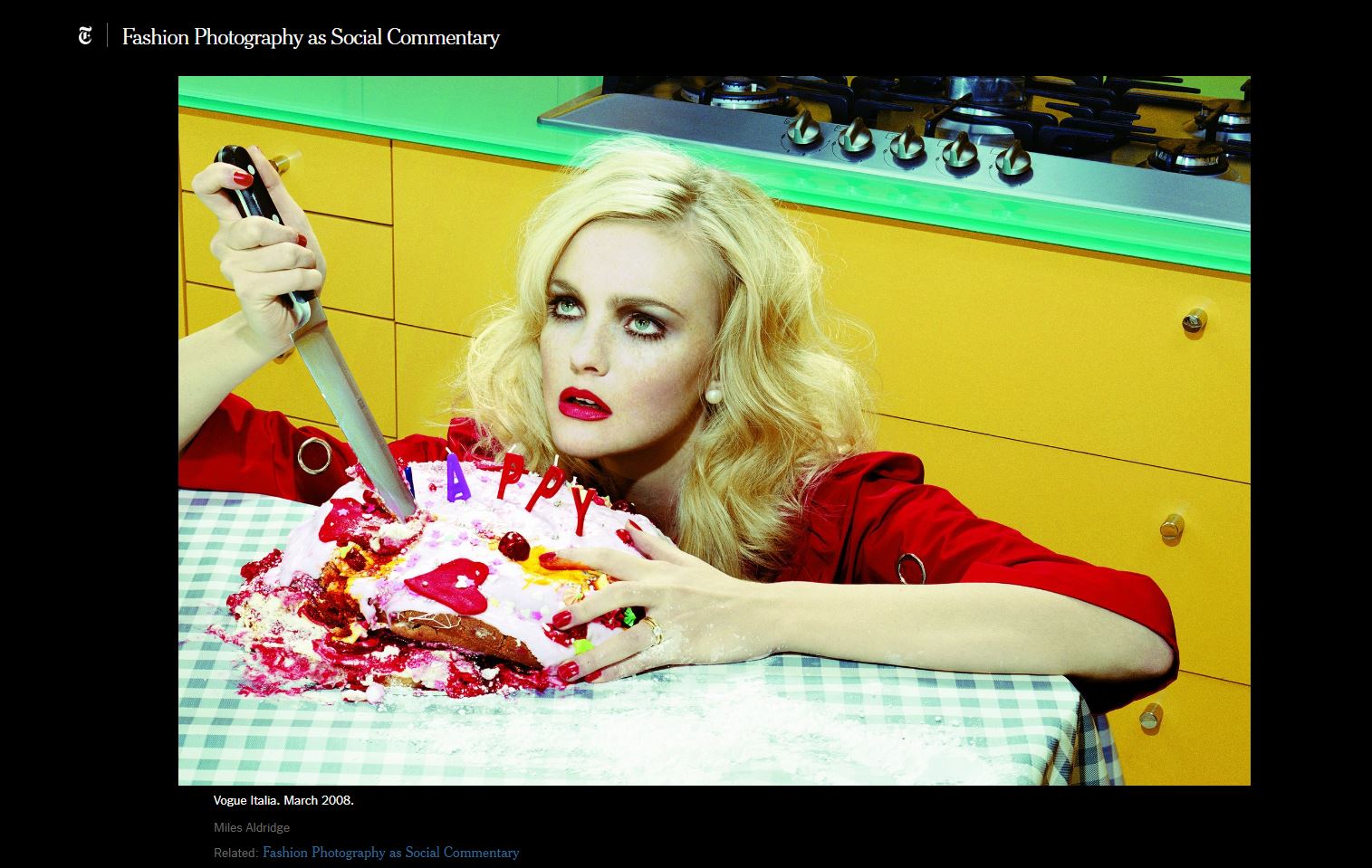 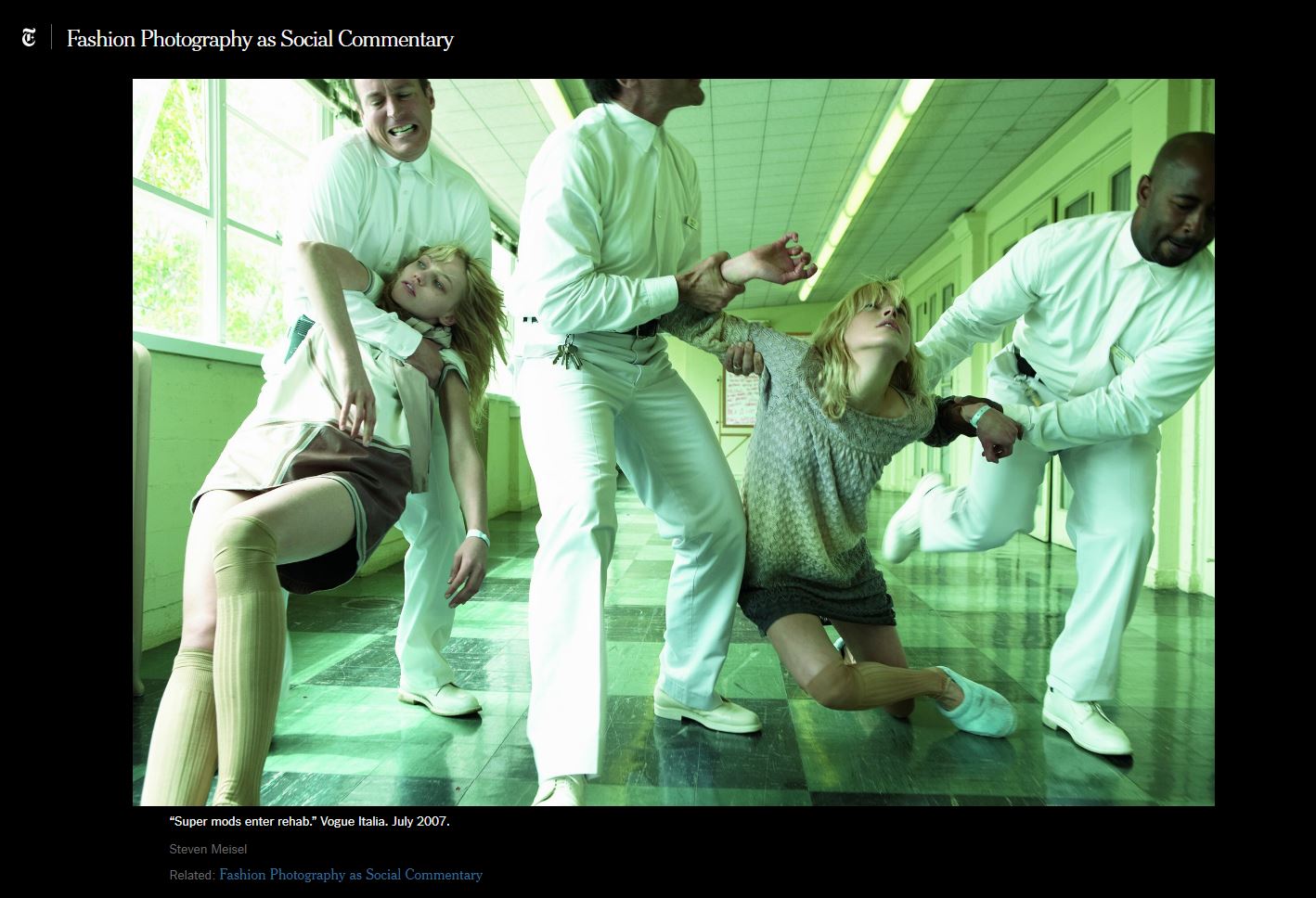 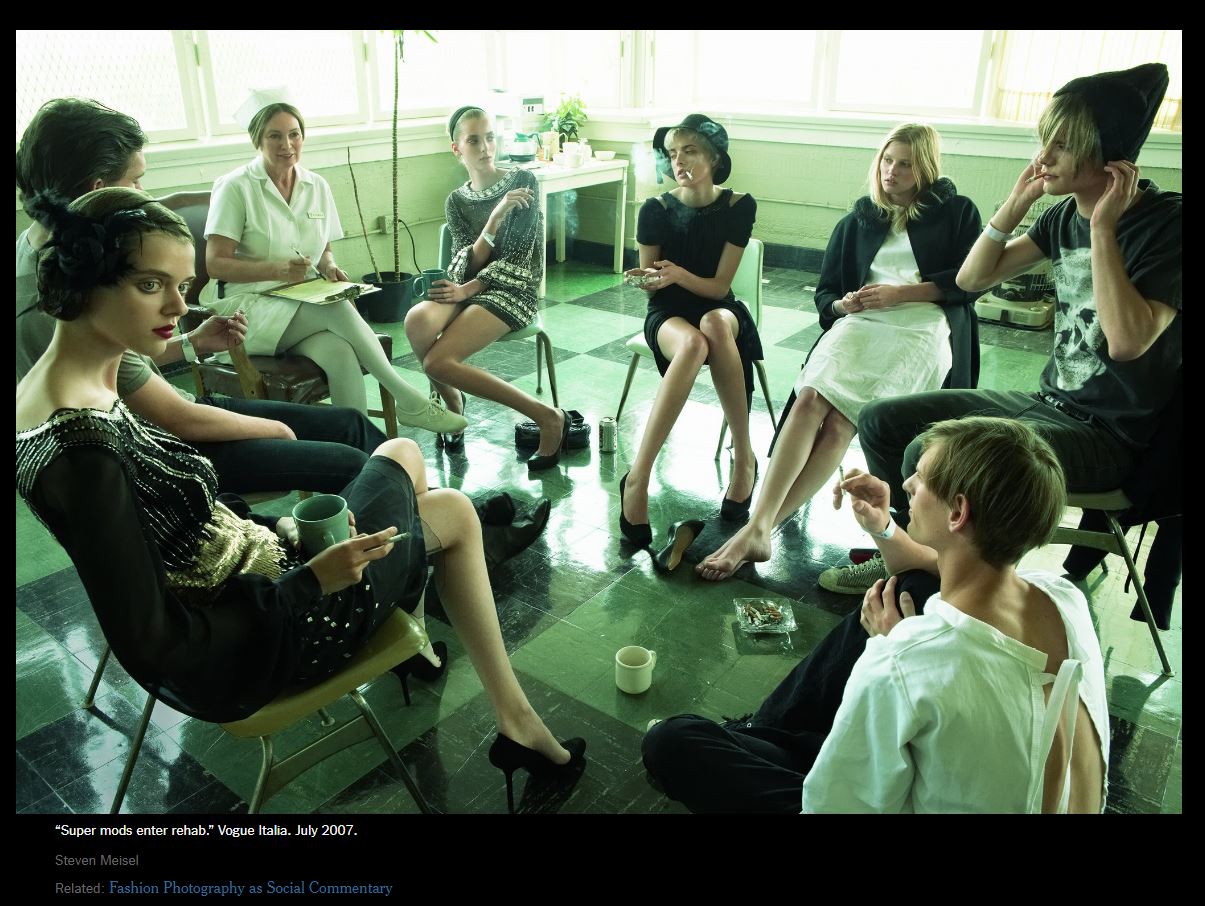 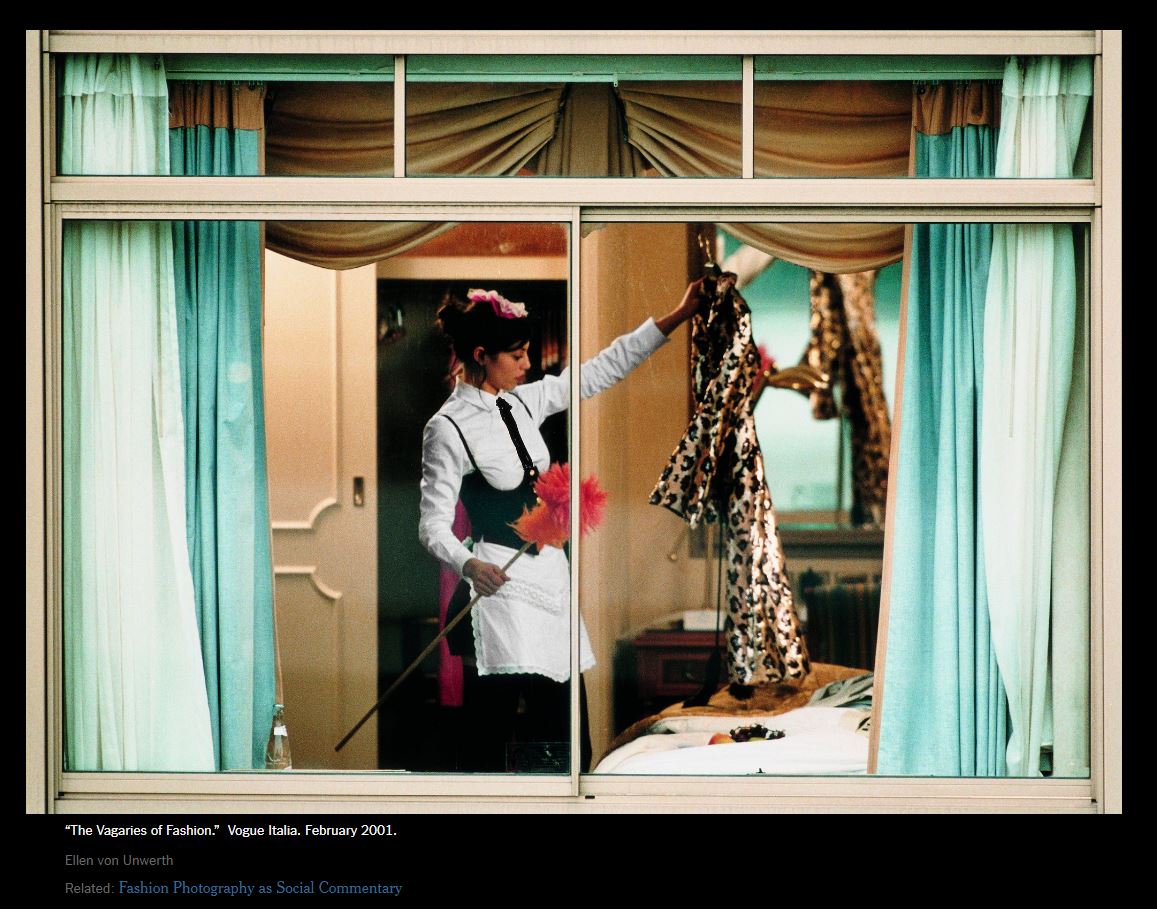 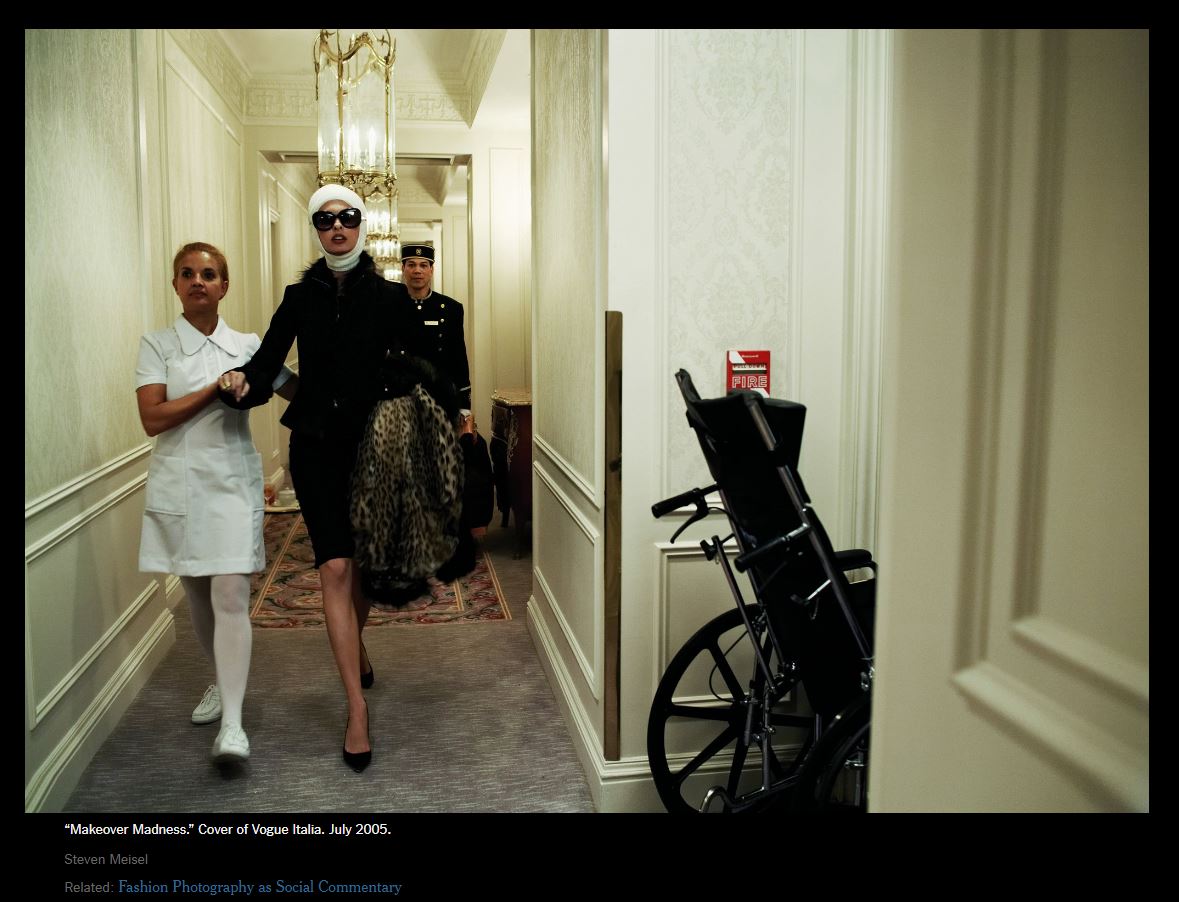 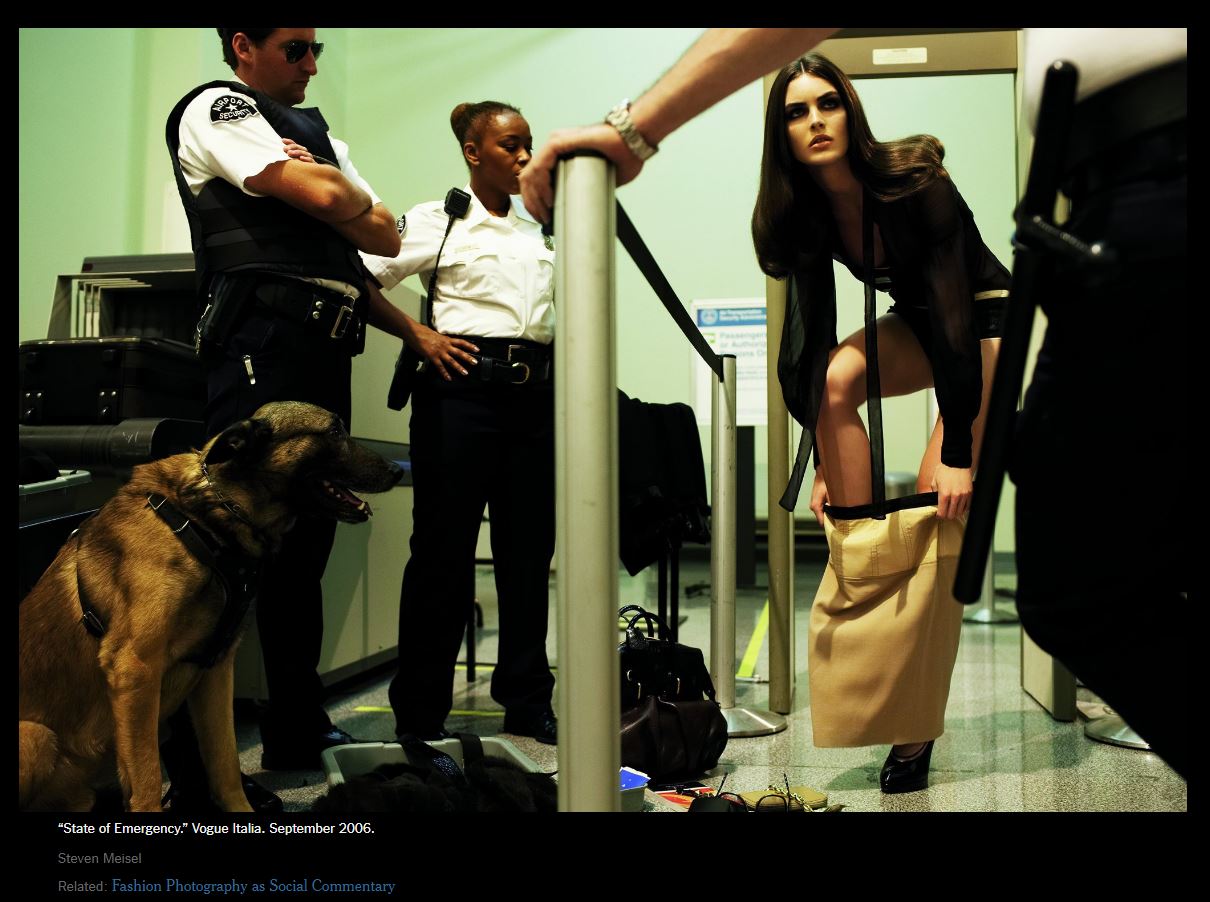 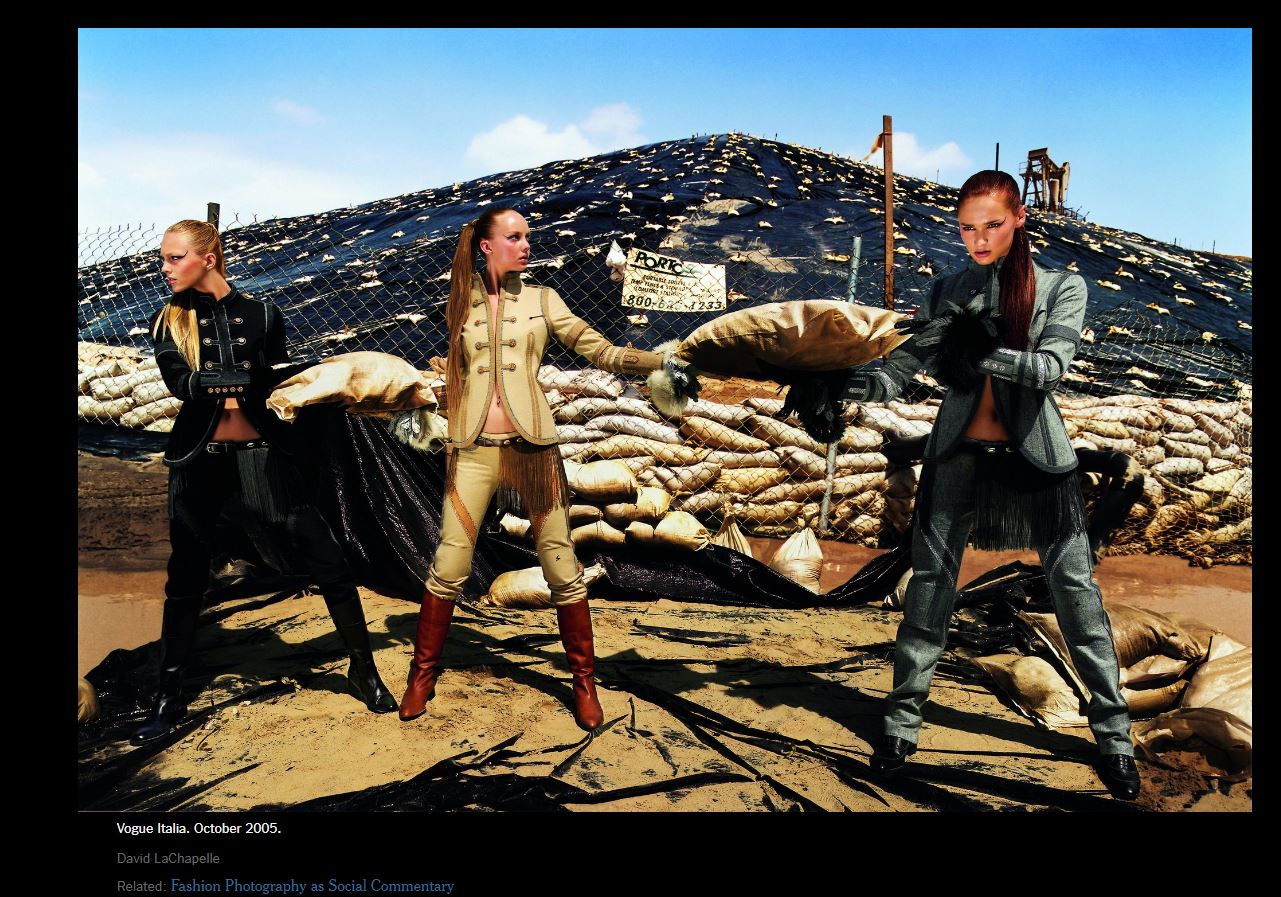 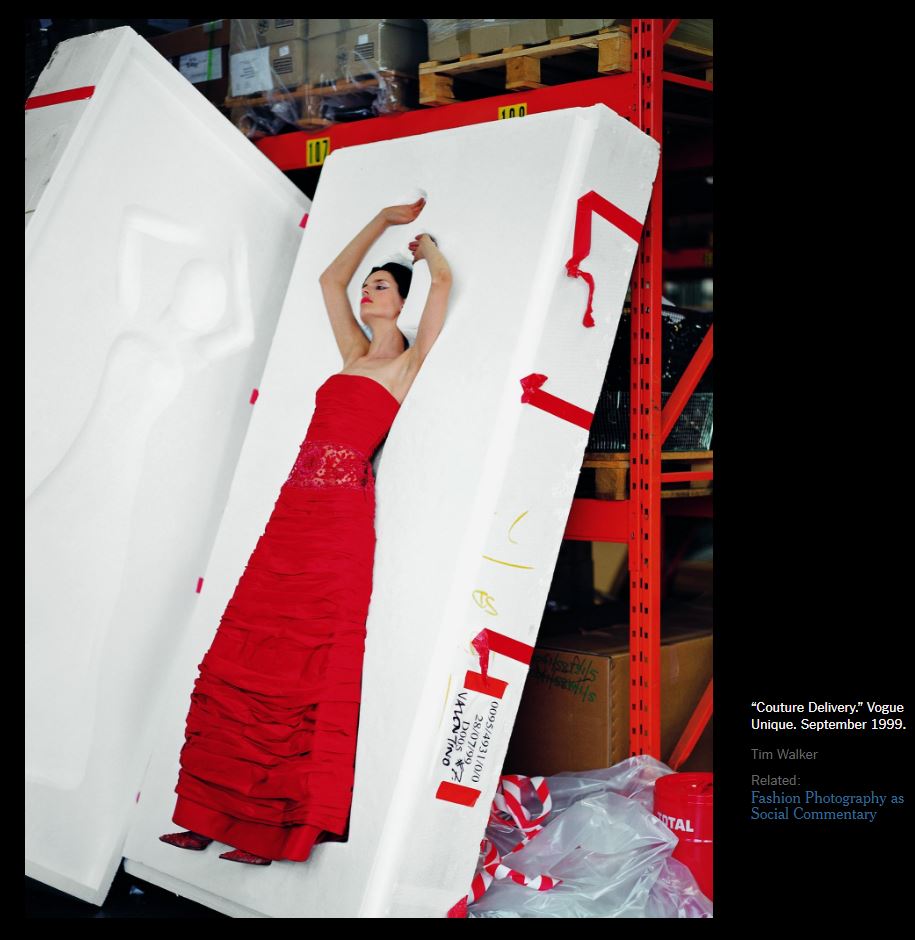 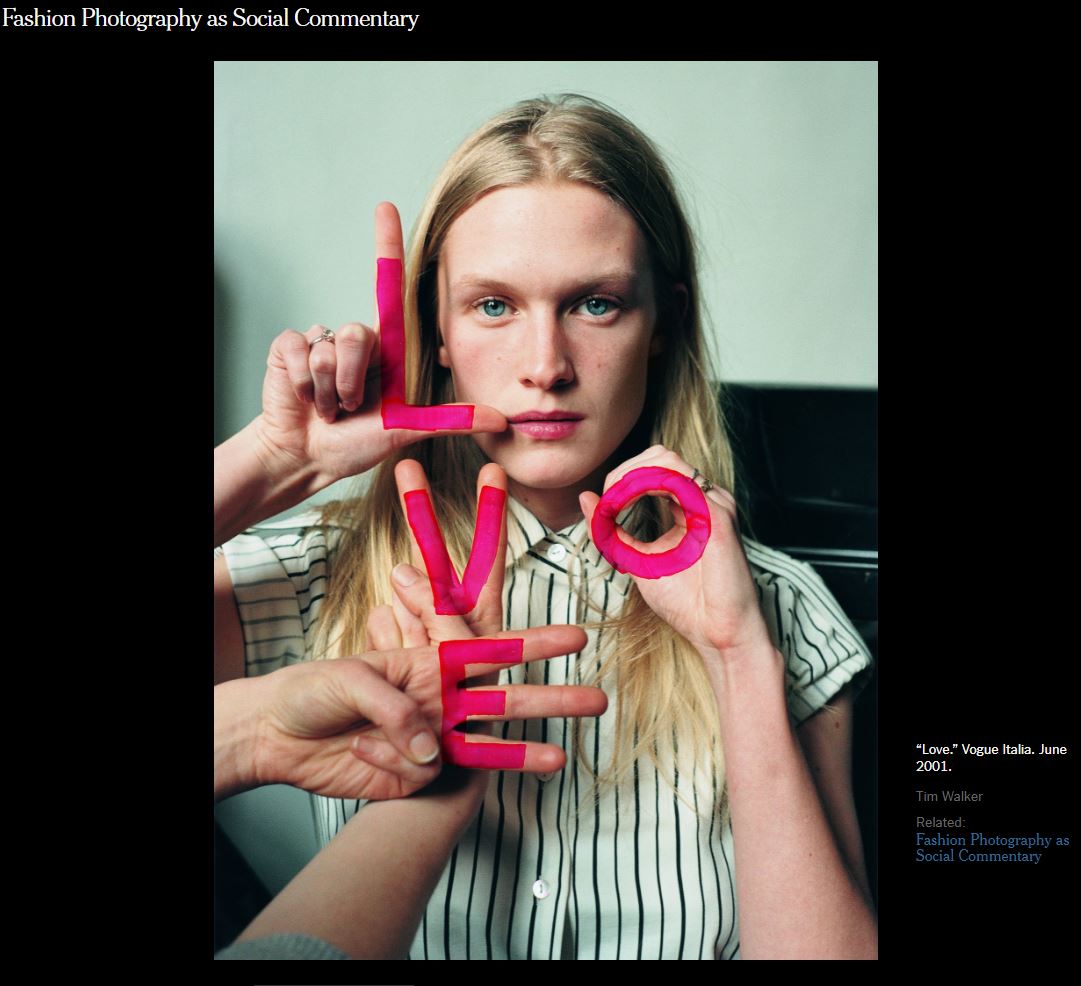 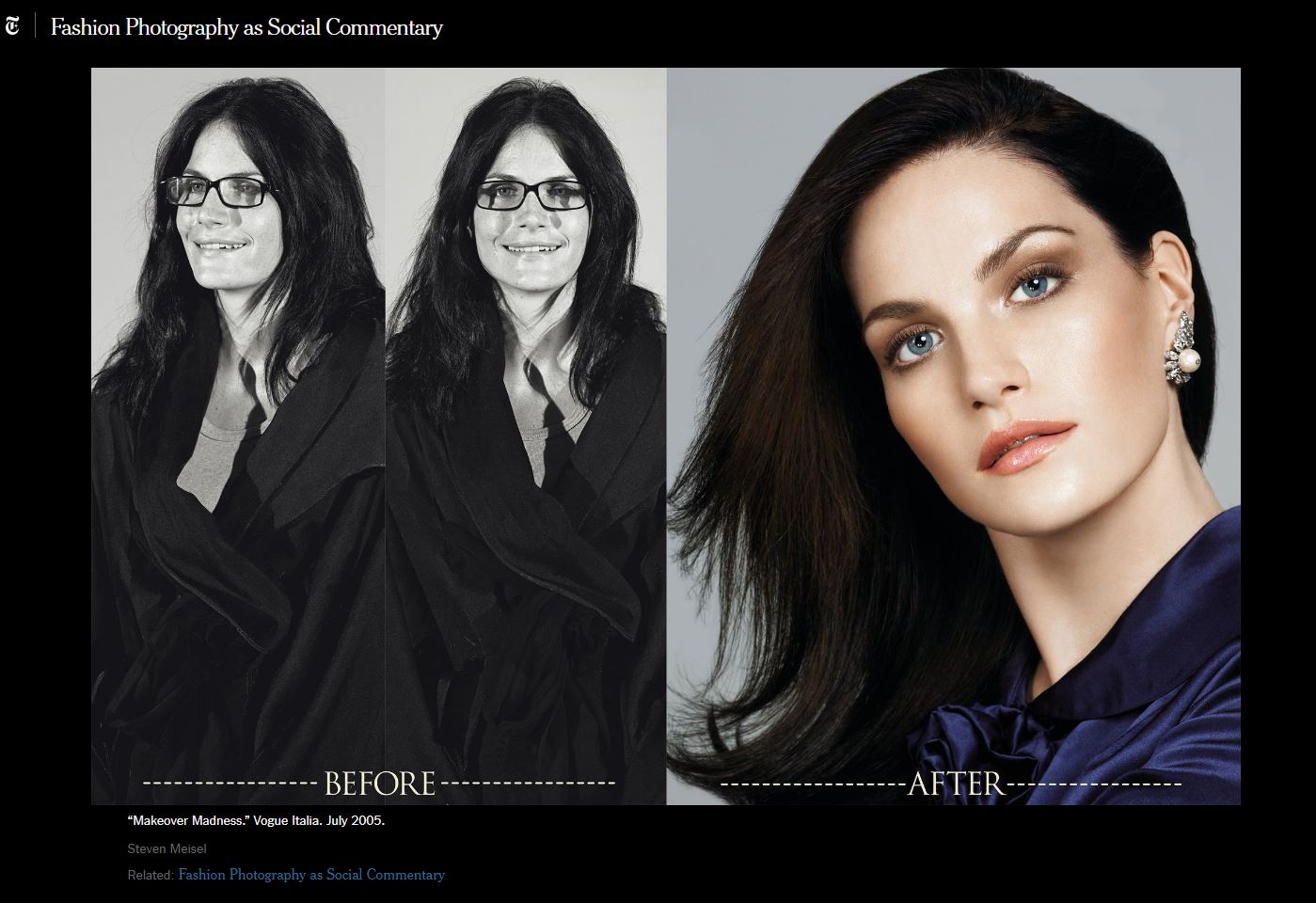 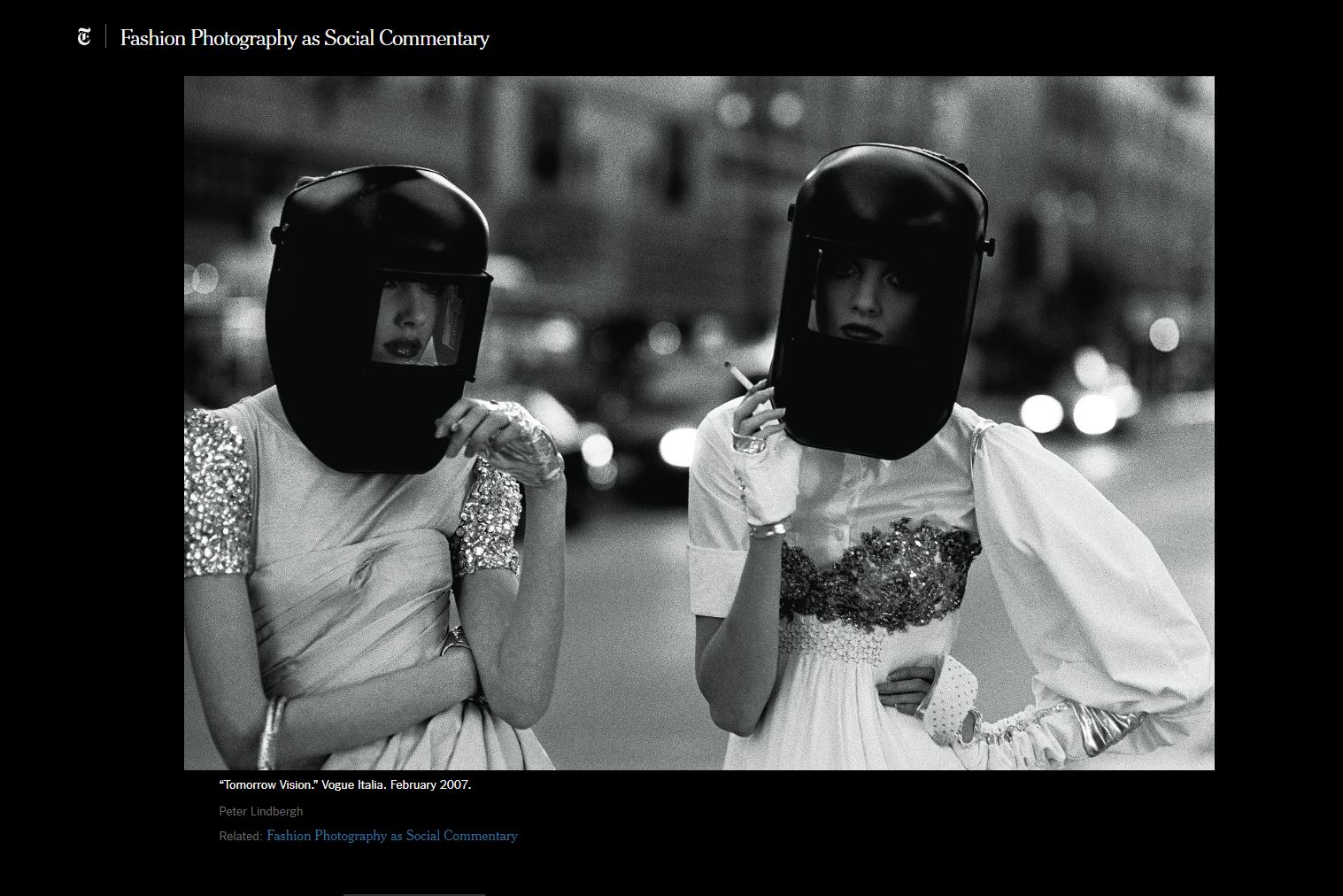 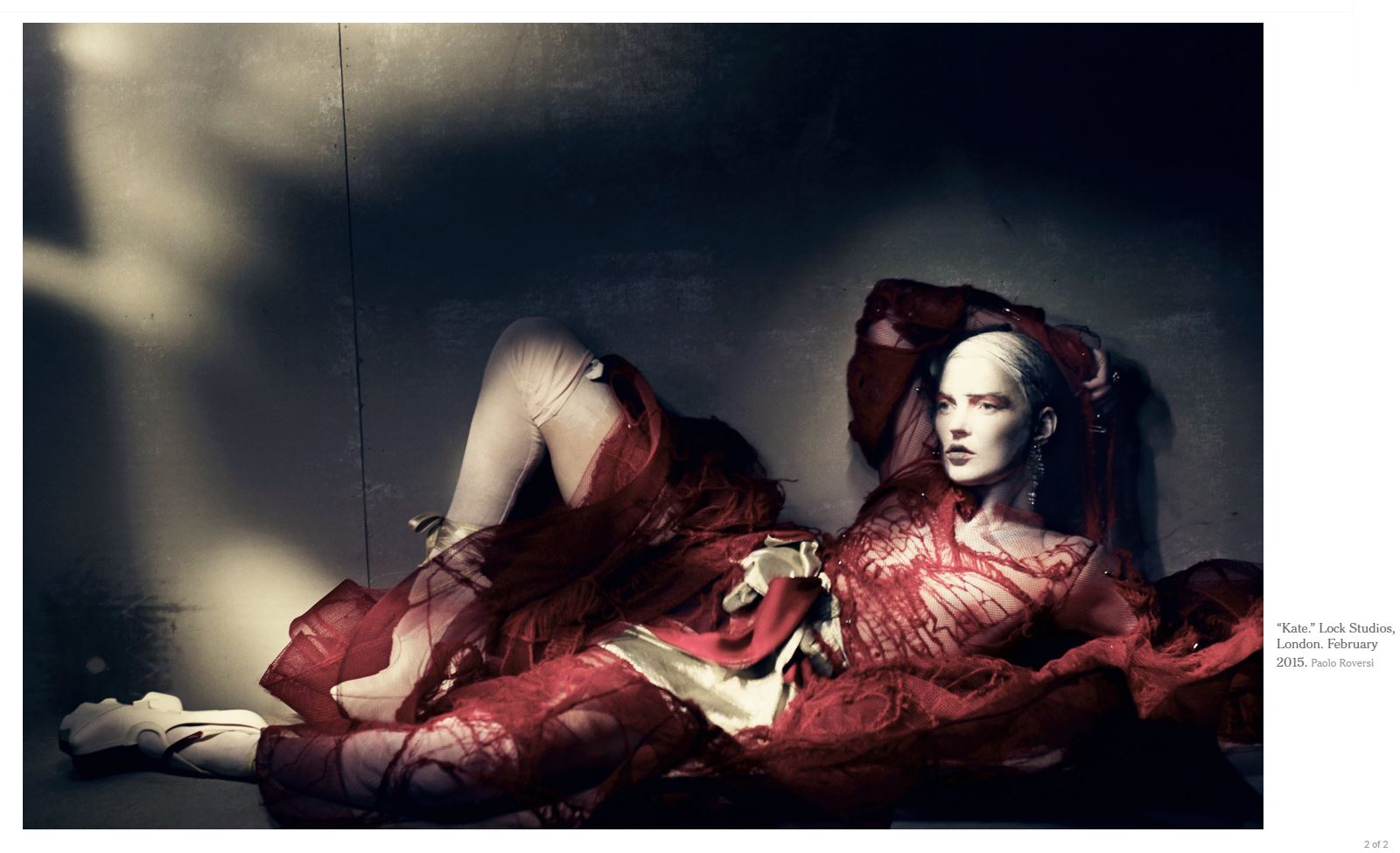 
When Vogue Italia published a spread by Steven Meisel that was inspired by the deadly Deepwater Horizon oil spill of 2010, it provoked criticism. Bloggers and fashion critics called it tasteless and exploitative, given the devastation to the Gulf of Mexico’s ecosystem. This was neither the first, nor the last time that the publication sparked controversy, and it reinvigorated the debate over what is and isn’t acceptable in fashion photography.
That discussion will continue at the second Photo Vogue Festival, where an exhibition titled “Fashion & Politics” brings together some of the magazine’s most tendentious shoots. “Fashion is not as frivolous as a lot of people might think,” said Alessia Glaviano, the magazine’s senior photo editor, who co-curated the show with her colleague Chiara Bardelli Nonino. “And, as an industry, we’re partly responsible for this perception because we rarely engage in a critical discussion of our work.”
While she welcomes criticism, she notes that because she sees fashion as political, fashion photography can and should offer social commentary. One needs only to attend protests and rallies to see how clothes helped people proclaim their ideals. The “pussy hat” became the symbol of the Women’s March while Trump supporters sported red caps reading “Make America Great Again.” Shirts declaring “The Future Is Female,” “Nevertheless, She Persisted” and “Nasty Woman” face off with those still demanding “Hillary for Prison ’16.”
“The way we dress is intrinsically tied to identity and culture,” Ms. Glaviano said. “We put on clothes every day to communicate something about ourselves.”


Caring about one’s looks when participating in acts of civil disobedience is not new. During the civil rights era, nonviolent protesters were told to wear their Sunday clothes to create jarring contrasts, while the Black Panther Party asserted its presence through a uniform that underscored the group’s revolutionary discipline. And the outrage Beyoncé encountered when she performed at the 2013 Super Bowl in an outfit inspired by the Panthers is a testament to an ensemble’s provocative power.
Thinking about the ties between clothing, photography and politics, Ms. Glaviano recalls Jonathan Bachman’s photo of Ieshia Evanscalmly facing the police during a Black Lives Matter protest in Baton Rouge, La. “Part of its power comes from the contrast between the way she appears, graceful in a long summery dress, and the hefty gear of the riot police,” Ms. Glaviano said. “It could be a fashion spread.” Yet, when Pepsi alluded to that moment in an ad starring Kendall Jenner, the public outcry was so intense that the company was forced to pull the commercial.
“When a business co-opts a political movement, that’s when it becomes blurry and messy,” Ms. Glaviano said. She believes the images featured in Vogue Italia belong to another category: more art than advertising. “We need to question this notion that because we’re in the business of promoting garments, we can’t comment on what is happening in our societies,” she said. “True, while the magazine is on stands, you can find the designs in stores, but three months later, that’s no longer the case: The clothes go, the photographs stay. The photographers we work with are artists. As such, they have a point of view, a perspective and a vision to share. They use clothes merely as a tool to tell stories, much like a movie uses costumes.”


Steven Meisel is a prime example. Besides the aforementioned “Water & Oil” spread, he’s produced several politically charged works for the Italian glossy. “State of Emergency” shows women being roughed up by riot police and airport security agents. “Make Love Not War” depicts soldiers and models in eroticized scenes. These were met with accusations of glorifying war and glamorizing violence against women for the benefit of selling high-end clothes. “Yes, there’s a lot of brutality in those spreads, but aren’t we reflecting what’s happening in society?” Ms. Glaviano said. “We’re denouncing it, not endorsing it. Unfortunately, too often people have already made up their mind about what fashion photography is, and they’re not willing to see the nuances.”
She believes that if you trace the evolution of fashion photography, you would notice how it merely mirrors shifting societal norms. “A picture doesn’t change things,” she said. “It simply arrives at a moment where society is ready to make some changes and becomes a catalyst.” For instance, she notes how models in the 1950s were portrayed as cold mannequins, an indication of how women were considered passive; how spreads in the 1980s stressed glamour, reflecting society’s obsession with wealth; how nowadays, through social media and the rise of the female gaze − last year’s theme − the industry had to think of beauty as much more inclusive; and how a photographer like Peter Lindbergh has been exploring ideas of masculinity, femininity and androgyny as communities have slowly been embracing a broader understanding of gender identity.
But not all fashion photography is or should be political. Sometimes it is undeniably commercial or unambiguously about celebrating beauty. The centerpiece of this year’s festival, on display at the Palazzo Reale, is Paolo Roversi, whose work stands as a counterpart to the likes of Meisel. Going through an archive of 150,000 images, Ms. Glaviano appreciated how his work is pure poetry based on a feeling for light and reflection on the medium itself.
“A successful magazine is one with a diversity of approach in its pages,” Ms. Glaviano said. “It can’t always be political, nor can it just be fantasy. Rather, it ought to be as multifaceted as the society it exists in.”
Follow @nytimesphoto on Twitter. You can also find Lens on Facebook and Instagram.


On The Learning Network, we constantly invite teenagers to write about their opinions, but it’s only during our annual Editorial Cartoon Contest that we ask them to illustrate those ideas.
With this, our third annual Editorial Cartoon Contest, we are inviting students to channel their thoughts into images, with inspiration from New York Times cartoonists like Patrick Chappatte and Heng Kim Song and from our 2015 and 2016 winners.
So if you have something to say about President Trump, immigration, fast fashion, football, robots, standardized testing or anything else The Times covers, try making an editorial cartoon that shows us what you think.
As Mr. Chappatte says in the video below, the challenge for a cartoonist is in coming up with good ideas; artistic talent is secondary. So find an issue or topic that matters to you, either from current events or historical events covered in The Times, and make your own cartoon.
When you’re done, use the submission form below to enter the contest by Oct. 17. Our judges will then use this rubric (PDF) to select winners for publishing on The Learning Network.
Continue reading the main story
ADVERTISEMENT
Continue reading the main story
For detailed rules as well as information about a chance to win a scholarship in a related contest, see below. And for step-by-step help in analyzing the elements of a good editorial cartoon and creating your own, use this related lesson plan, “Drawing for Change: Analyzing and Making Political Cartoons.”

1. For this contest, we are accepting drawings or illustrations, or a series of artworks, that offer commentary or criticism about current issues, political topics or historical events covered in The New York Times. Format examples include, but are not limited to, single-panel drawings with captions, sequential comic art, illustrations or digitally created drawings.
2. Don’t be afraid to take a stand or have an opinion. Editorial cartoons illustrate a point, prompt a realization or offer an example. For inspiration, you may want to look over the winners from 2015 and 2016.
3. Your submission must link to at least one related Times source, but because The Times has been publishing since 1851 and because content from any section or era can be inspiration for your work, that should be easy. If you’re stuck, try searching; you may be surprised at how much you can find in The Times.
Please remember that NYTimes.com has a digital subscription system in which readers have free access to 10 articles each month, but after that you will be asked to become a digital subscriber. However, The Learning Network and all Times articles linked from it are free. That means you can use any of the articles we have linked to on this site without exceeding the 10-article limit. (To learn about subscribing, visit this page.)
4. Please submit only one editorial cartoon per student. If you are submitting a series of illustrations or panels as your cartoon, be sure that your entry is contained in one image file to be uploaded.
5. To include a caption for your cartoon, wait until your image loads. Then you will see a new field appear that says, “Write a caption for this file.” You will also be asked to “Add a credit for this file.” Both of these fields are optional.
6. Be original and use appropriate language. Create your cartoon for a well-informed audience, but include enough background information to give context. Be careful not to plagiarize.
7. Submissions must be from students between 13 and 19 years old, although students can come from anywhere in the world. Feel free to post your name (first and last names, or first name and last initial) or to use a custom username. If your cartoon is selected as one of the winners, we will publish this name along with your cartoon.
8. All entries must be submitted by Oct. 17, 2017, at 11:59 p.m. Eastern. If you have questions about the contest, please post them in the comments section, and we’ll answer you there.
9. We will use this rubric (PDF) to judge editorial cartoons. The top cartoons, as judged by The Times and professional cartoonists, will be featured on The Learning Network.
Good luck and have fun. As always, we welcome your questions and comments in case we have somehow omitted details that might be useful. Let us know how we can help.
_________

We also encourage students in grades 7 through 12 to consider entering their cartoons into The Scholastic Art and Writing Awards’ Editorial Cartoon category, sponsored by the Herb Block Foundation. Three $1,000 scholarships will be awarded to students who earn National Medals in Editorial Cartoon in the 2018 Scholastic Art and Writing Awards. Visit this page for more information.
Posted by Cabecilha at 7:21:00 PM No comments: