Animated GIF I made at Picasion.com:

She’s an artist and scholar, and at “A Synthesis of Intuitions” you see thinking — about gender, racism, art — happening before your eyes.

She’s an artist and scholar, and at “A Synthesis of Intuitions” you see thinking — about gender, racism, art — happening before your eyes. 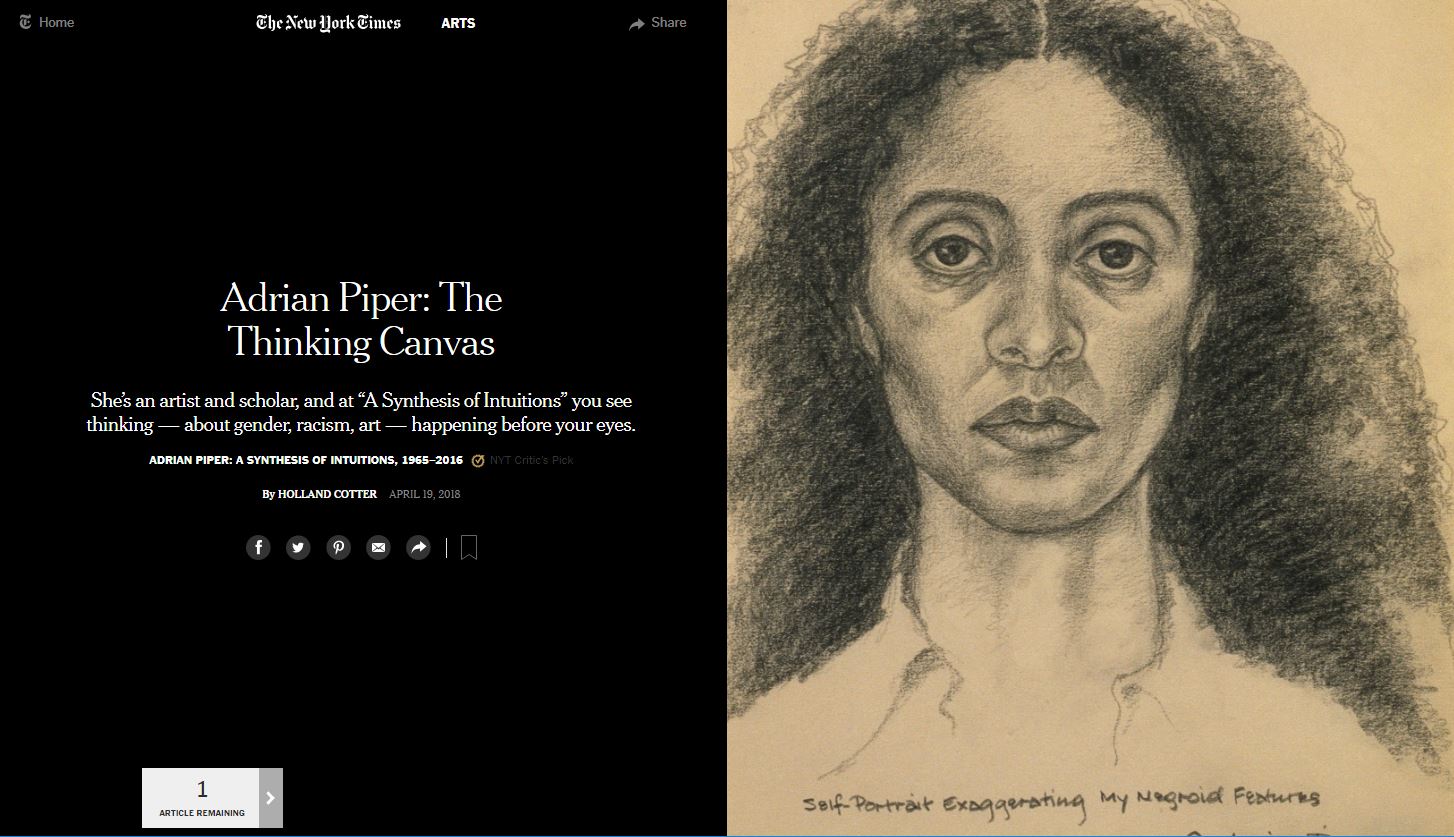 “Adrian Piper: A Synthesis of Intuitions, 1965-2016” at the Museum of Modern Art is a clarifying and complicating 50-year view of a major American artist’s career. It is also an image-altering event for MoMA itself. It makes the museum feel like a more life-engaged institution than the formally polished one we’re accustomed to.
Despite the show’s retrospective cast, we find fiery issues of the present — racism, misogyny, xenophobia — burning in MoMA’s pristine galleries. The reality that art and its institutions are political to the core — both for what they do and do not say — comes through. And the museum, for once, seems intent on asserting this. For the first time it has given over all of its sixth floor special exhibition space to a single living artist. The artist so honored is a woman, who has focused on, among many other things, the hard fact of racism and the fiction of race.
Ms. Piper was born in New York City in 1948 to parents of mixed racial background. (Her father held two official birth certificates. In one he was designated white, in the other octoroon, one-eighth black.) Raised in a cosmopolitan environment, she studied at the Art Students League in her teens, and in 1966 enrolled at the School of Visual Arts. The MoMA show opens with a salon-style hanging of figurative paintings, including self-portraits, from that time, influenced by 1960 psychedelic graphics and by her youthful experiences with LSD.
The idea of consciousness altering — and raising — would remain essential to Ms. Piper’s thinking. While at art school she immersed herself in the practice of yoga, a lifelong pursuit that would lead to an intensive study of Hindu thought. In 1967, she dropped out of the School of Visual Arts and enrolled in the City College of New York, where she majored in philosophy. (In 1981 she completed a doctorate in the field at Harvard.) More or less simultaneously, she shifted from figurative to Minimalist-style abstract painting and sculpture. Then, attracted to Conceptualism’s privileging of ideas over conventional forms, she began using arrangements of words, sometimes as instructions for actions, as a medium.
Continue reading the main story

But abstraction, in several varieties, proved to be double-edged. On the one hand, it seemed to offer a new, expansive utopian dimension for art, beyond social, racial and aesthetic particularities. At the same time, it was inadequate to deal with undeniable realities of life in the Vietnam era. Traumatized by political events of 1970 — the United States invasion of Cambodia, the killing of students at Kent State and Jackson State — she began to come to grips with her own identity as an African American in a violent, racist society.

The initial work that resulted from this awakening wasn’t overtly topical, but it was about as far from being abstract as she could get. She used her own body as a primary image in a series of unannounced public performances. For one, she walked New York streets soaked in wet paint; for another she rode the subway wearing odoriferous clothing; for a third she broke into spontaneous dance — in bank lines and libraries — to the internalized sound of Aretha Franklin singing “Respect.” She turned herself into a disruptive alien, an outsider, a disturber.

A few years later, she gave the alien a racial identity and a name. Wearing an Afro wig, a fake mustache and mirrored sunglasses, she enacted the stereotype of an aggressive young African-American male whom she called the Mythic Being. Sometimes, he showed up in public, and verbally confronted passers-by. He also existed in hand-altered photographs. In one such picture, published as a paid-for insertion in the Village Voice, he is made to think the words: “I embody everything you most hate and fear.”

Almost inevitably, Ms. Piper has become best known over the years for her art about racism, and for good reason: it’s powerful work, brilliantly varied in form. Some of it draws on her considerable graphic skills. In a series of 1980s charcoal drawings called “Vanilla Nightmares” she inserts scowling, sexualized black-skinned figures into news stories and upscale advertisements from The New York Times.

In a 1991 installation called “What It’s Like, What It Is, #3,” she continues to explore direct-address performance. Here, in what might be considered a Mythic Being update, an African-American man, seen on a video monitor surrounded by bleacher-like seating, slowly recites, and rejects, a long list of racial slurs: “I’m not pushy. I’m not lazy. I’m not noisy. I’m not shiftless. I’m not crazy. I’m not servile. I’m not stupid.”

Ms. Piper has also, over the decades, consistently used her own image in inventive, distanced, self-mocking ways, as in two well-known self likenesses done several years apart, one, a pencil drawing titled “Self-Portrait Exaggerating My Negroid Features” (1981) the other, a crayon-enhanced photograph called “Self-Portrait as a Nice White Lady” (1985). In these images, as in all of her work, her aim is not to assert racial identity but to destabilize the very concept of it.

And she has fun playing with it. In her exhilaratingly witty 1983 film “Funk Lessons,” she coaches a class of mostly white graduate students in the how-tos of soul dancing (shake your head, lift your leg), as if blackness were a personal style that could be learned by instruction. And in a quietly scathing 1988 video installation, “Cornered,” she treats racial identity as both a delusion and an entrapment.

Playing a role, as she usually does — very little of her work is directly autobiographical — she speaks directly to us, a very likely white art world audience, with the measured tone of a newscaster. She informs us that, despite her light complexion, she is black, and that chances are good, given the American history of racial mixing, that we are black too. This reality has negative fallout in two directions. It means that white listeners lose their politically privileged identity, and she — now a self-declared “black artist” — is trapped in hers.

Because race has often been her subject, a frequent and career-shaping assumption is that it is her only one, a misperception that this retrospective makes a serious and successful effort to correct. It devotes considerable space to her early, abstract work. It reminds us that the references in her subsequent topical work has been broad-based, ranging from the war in Vietnam to poverty in America. We are reminded that the images of difference generated by the performances were images not defined by ethnicity, and that the original Mythic Being series was as much about gender as it was about race.

Misogyny has always been one of Ms. Piper’s targets. In 1986, she designed a business card intended to be passed out at opportune moments to defuse instances of sexual aggression. The card read: “Dear Friend, I’m not here to pick anyone up, or to be picked up. I am here alone because I want to be here, ALONE.”
The show also reminds us of the multidisciplinary texture of Ms. Piper’s career. Professionally, she is both, and equally, a visual artist and an academic scholar. (She taught philosophy for decades in American colleges and universities and teaches it now in her new permanent home in Germany.) Walking through the show you can see thinking happening right before your eyes. And certain strands of her more recent work have a meditative, existentialist cast — a reminder of Ms. Piper’s initial hopes for the transcendent potential of abstraction.
A decade-spanning project called “Everything” (2003-2013) has three parts. One is a series of informal photographic portraits in which the faces have been obliterated and replaced by the words “Everything will be taken away.” Another is a set of images of American political martyrs (Medgar Evers, Robert F. Kennedy, Dr. Martin Luther King Jr.) accompanied by the same phrase. A third is an installation of four schoolroom blackboards on which that phrase is repeatedly written in chalk, like a lesson meant to be drilled into memory.
The mortality-redolent words also form an essential tenet of Hindu philosophy: everything — lives, eras, identities, art — will change.
The great emblem of change is Shiva, the divine yogi, dancing his circular dance of life and death. His image appears repeatedly in Ms. Piper’s recent art, most notably in a 2004 film documenting a spectacular iteration of “Funk Lessons.” And at the end of the MoMA show, just outside the final gallery, we see a projected 2007 video of Ms. Piper soul-dancing in a public plaza in Berlin, alone except for pedestrians on their way from here to there.
The image brings the retrospective full circle, back to Ms. Piper’s solo performances of outsiderness of many decades ago. It’s to the credit of the show’s organizers — Christophe Cherix, chief curator of the drawings and prints department at MoMA; David Platzker, a former curator in that department; Cornelia H. Butler, chief curator at the Hammer Museum in Los Angeles; and Tessa Ferreyros, a curatorial assistant at MoMA — that they’ve been careful to make such links, and by doing so point up the fierce, steady logic of this artist’s career.
It’s even more to their credit — and a boon to the future — that they’ve kept that career’s difficulty, and toughness, and nowness to the fore. Historically, institutionally, MoMA has favored smoothness and symmetry, whiteness. It has tended to shave off the awkward corners of art, sand its sharpest edges down. In this case, the corners and edges stand firm in an art and a career that is entirely about them.