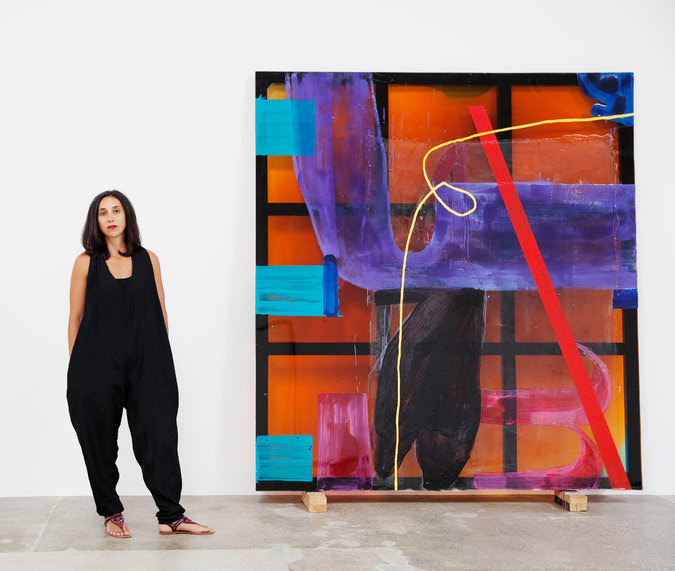 Michele Maccarone with a work by the artist Alex Hubbard at her new gallery in Los Angeles. She says it is twice the size of her flagship space in the West Village. Credit Emily Berl for The New York Times
LOS ANGELES — Michele Maccarone, in a flowy black jumpsuit, was striding across the cement floor of her cavernous new gallery here last week, debating where brightly colored abstract paintings by Alex Hubbard should go. “There’s just, like, this endless amount of really incredible space,” she said, as Mr. Hubbard and assistants moved the weighty frames for his solo show.

At 35,000 square feet indoors, with an additional 10,000 square feet outside earmarked for a sculpture garden, the Maccarone gallery, in industrial Boyle Heights, is the length of a city block. In true Los Angeles fashion, the broker drove prospective clients around from the front door to the back, judging it too big simply to walk through.
Mr. Hubbard said he felt guilty when he first stepped inside his studio there, one of two in the complex.
“It’s unusual to have so much time with a space,” he said of his high-ceilinged workroom.
Both Ms. Maccarone and Mr. Hubbard are recent arrivals from space-challenged New York, part of a deluge of artists and dealers who are setting up shop in the vast warehouses of the arts district, a newly popular area a few miles from downtown.


This West Coast outpost of Maccarone — the dealer’s 15-year-old New York gallery — opens on Saturday, one of four galleries opening the day before the public debut of the hotly anticipated Broad Museum nearby. Of roughly two dozen galleries now in the district and its environs, half have opened in the last year, drawn in part by a glut of cheap space. A fistful came from New York or Europe, all vying for talent and clientele. And there will be more, like the blue-chip Hauser Wirth & Schimmel’s 100,000-square-foot complex coming next spring.
Within a few minutes’ drive of one another, the galleries are beginning to give the area the urban cultural density that Los Angeles mostly lacks.
Clyde Beswick, a collector and an owner of CB1 Gallery, which moved into a 4,500-square-foot arts district space in January, adjoining another gallery, said that he now sells 30 percent more work than he did in the downtown commercial zone. But Mr. Beswick worried about the competition as galleries proliferate.
Advertisement
Continue reading the main story

“I don’t know where everyone is going to find buyers,” he said.
Even so, the excitement is palpable.


“You can’t deny that there’s been a rush to Los Angeles in terms of the creative community, and now even the market,” said Michael Govan, director of the Los Angeles County Museum of Art. “There’s a material change. You feel it, in art culture and culture in Los Angeles. You see it filling in.” Downtown restaurants on once-forlorn blocks are crowded, and loft apartments are popping up. With grand spaces and new scenes percolating, the artists’ work can be riskier. “A lot of it is esoteric, less market-driven, more idea- and art-driven,” he said.,
That was the case for Nick Haymes, the owner of Little Big Man, a gallery opening on Saturday with a solo exhibition of mostly YouTube video work by the photographer Doug Rickard. “I can afford not to do a safe show,” said Mr. Haymes, who moved to Boyle Heights from San Francisco, landing in a live-work building next to the Los Angeles River. There are quirks — “there’s an organic pesticide storage next to me, so it smells of garlic and ginger at odd times of day,” he said — but for less than $2 a square foot, “I can exist,” and he can sell artworks for a few thousand dollars apiece, he said.

Ms. Maccarone, who recently bought a historic home in Bel Air, aims to do more than that.
“I can’t grow like this in New York,” she said of her enormous space, double the size of her West Village flagship. She borrowed against the New York gallery, which she runs with a partner, Ellen Langan, to sign a 15-year-lease on this space, which she has booked with three years’ worth of long-term exhibitions by the sculptor Oscar Tuazon and the pop artist Nate Lowman, among others.
Ms. Maccarone said her goal was to give her artists extra leeway and more time (Mr. Hubbard’s show runs until December), without the pressure of New York. “I feel like here it’s not so cutthroat,” she said. “And there’s space to think. You know, you’re not in, like, a 400-square-foot room trying to make your art in a basement in, like, Bushwick.”


Ms. Maccarone was tipped off to her building by Laura Owens, an artist involved with 356 Mission, a neighboring joint venture with the New York gallerist Gavin Brown and Wendy Yao, whose book and design shop is just inside the entrance. That art space was an early outpost in Boyle Heights, a part of the district that still has an anything-goes feel. “It still has a dangerous quality — I kind of like that,” Ms. Maccarone said. “I like that we spent a fortune on security.”
Cool-kid hangouts like 356 Mission and the influential Night Gallery, which moved from a strip mall to the edge of the district in 2013, are beacons in the neighborhood. “This is a sort of autonomous zone,” said Davida Nemeroff, of Night Gallery, which sits cater-corner from a strip club.
The area is changing fast, though.
“When we first moved here, there was guys pushing shopping carts full of scrap metal, and within six months, there was guys with mustaches, sipping lattes,” said Jon Pylypchuk, an owner of Grice Bench, which opened last summer.
The arts district is the latest addition to the city’s spread-out gallery world, navigable with sites like Curate.LA.


Ms. Maccarone has tried her luck in Los Angeles before, in a space with the dealer Christian Haye in Culver City, but she abandoned it for financial reasons.
For years, the knock against Los Angeles was that “there’s a lot of artists, but there’s no art market,” as Mr. Govan, the museum director, put it. But that, too, may be changing.
Even a young gallery like Grice Bench had a sold-out show, of the little-known local weaver Christina Forrer.
“I’m constantly visiting galleries downtown and going to openings downtown, and I think that’s such a brand-new idea,” said the collector and television producer Maria Bell. “It’s really transforming a part of our city that was long neglected.”
For some artists, the momentum and the square footage are enough. “The young scene that’s developing now, there’s an energy around them that’s exciting to me — it reminds me of New York,” said Mr. Hubbard, 39, who moved here from Brooklyn.
At first, he said he didn’t even use two-thirds of his Maccarone studio. “I was embarrassed by the size of it, because in New York, real estate has such a different meaning.”
Now, he said, “I’ve stretched out.”