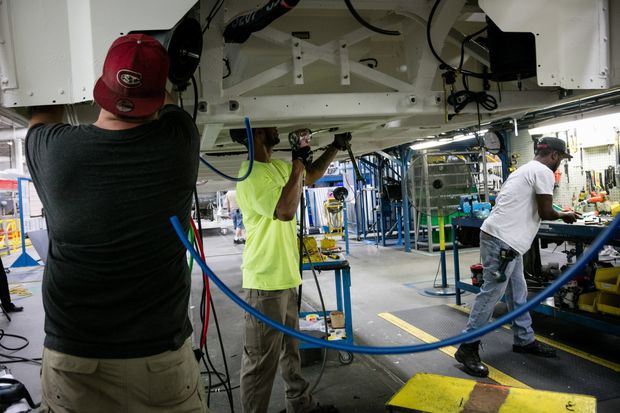 Workers install brake and air lines on a bus at the New Flyer Industries manufacturing facility in St. Cloud, Minn., last month. While the immediate outlook for the rest of 2018 is strong, economists surveyed by The Wall Street Journal see an 18% chance of a recession beginning in the next 12 months. PHOTO: ARI LINDQUIST/BLOOMBERG NEWS
198 COMMENTS
By
Josh Zumbrun
Updated Aug. 9, 2018 6:05 p.m. ET
Economists are raising 2018 growth projections after a strong second quarter, but disputes with U.S. trading partners, a fading boost from fiscal stimulus and rising short-term interest rates lead many to believe the boom won’t last much beyond that.
The average estimate for economic growth this year increased to 3%, up from projections of 2.9% last month and 2.4% a year ago, according to The Wall Street Journal’s monthly survey of private economists. They also see the unemployment rate falling to 3.6% by June, which would be the lowest unemployment rate in nearly 50 years. The jobless rate in July was 3.9%.
Consumer spending and business investment were robust in the spring, thanks in part to tax cuts that put more money in household pockets and gave businesses a higher after-tax return on their investments.
“The tax cuts and jump in federal spending will keep the economy buzzing for another 12 months,” said Bernard Baumohl, chief economist of the Economic Outlook Group. “Beyond that, however, I expect to see dark clouds forming that would signal a recession is near.” 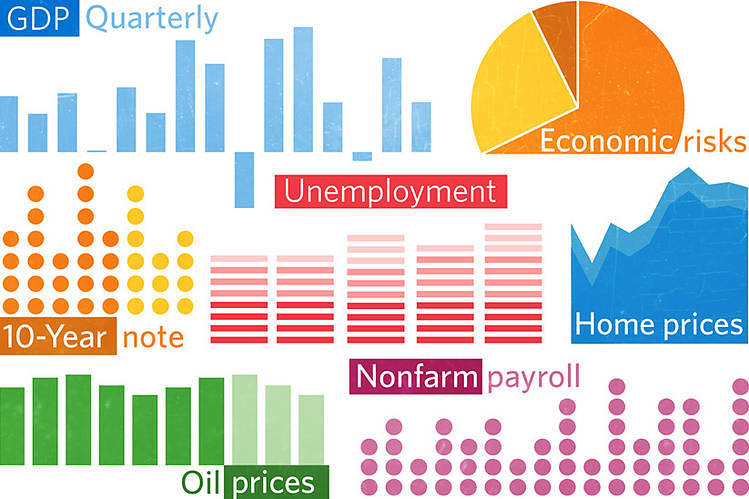 THE WALL STREET JOURNAL
Mr. Baumohl isn’t alone in predicting a slowdown after the boost from last year’s tax cuts begins to fade and because rising tariffs between the U.S. and its trading partners could lead to repercussions for the economy. Businesses that were enthused about the tax relief could hold off hiring and investing in the face of trade uncertainty, several economists said.
“Prospects of trade war are eroding business confidence from the Tax Cuts and Jobs Act,” said Kevin Swift, the chief economist of the American Chemistry Council. The chemicals industry is among those facing tariffs on imports, and the association has criticized the tariffs.
The average forecast for growth in 2019 was 2.4%, little changed in recent months. By 2020, the average forecaster projects economic growth will slow to 1.8%. That is down from estimates earlier this year of 2%.
Trump administration officials disagree with these projections. The White House has said 3% growth or better can be sustained. Other government forecasters, including the Federal Reserve, Congressional Budget Office and International Monetary Fund all project a slowdown from the growth rate of 2018. The Fed, for example, sees 2% growth in 2020 and 1.8% growth in the long run. 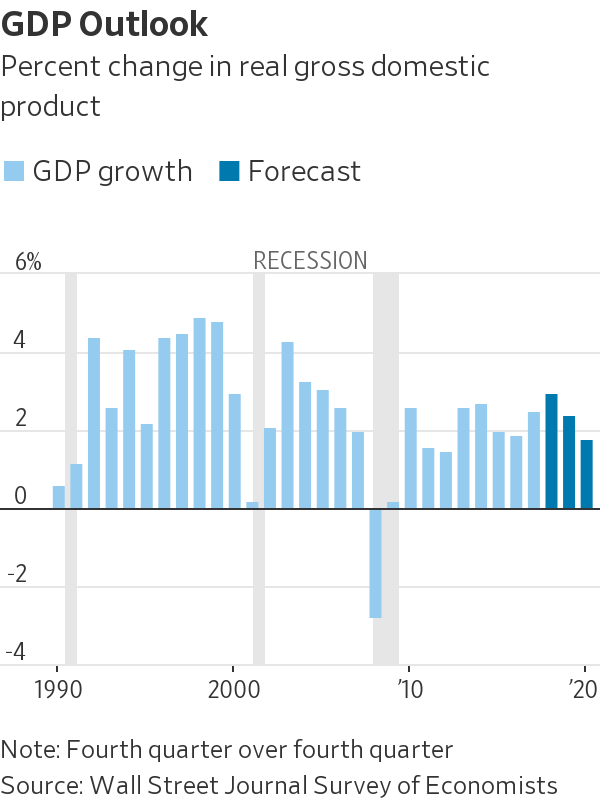 The differences might look small, but they have huge impacts on budgets and well-being. Maintaining 3% growth or higher could help the economy grow out of looming trillion-dollar budget deficits. Moreover, if the administration’s growth forecast is maintained, the economy would double in size over the next 24 years. At the 1.8% rate forecast by economists for the year 2020, it would take 39 years.
At the root of the differing views between the administration and other forecasters is a debate about how tax cuts and regulatory rollbacks will affect growth. The administration has argued tax cuts and deregulation will lead to lasting increases in worker productivity as firms invest more and greater labor-force participation, meaning more workers with greater output.
Many other forecasters, however, think the tax cuts and spending increases recently passed by Congress will amount to only temporary stimulus, with effects fading much like the stimulus spending passed during the first year of the Obama administration, which contributed to a temporary growth spurt before giving way to lackluster growth.
Some economists argue the tax cuts may lead to longer-run boosts to productivity and innovation, but say the magnitude and timing is hard to estimate.
“There’s a legitimate argument to be made that with a lower tax rate you broaden the [tax] base and increase investment,” said Constance Hunter, the chief economist of KPMG LLP. “Over time that should boost productivity, but it’s very difficult to say exactly when because the nature of innovation is haphazard.”
Fed policy is another wild card. Inflation, as measured by the consumer-price index, is forecast to remain above 2% through 2020, a backdrop that will require the Fed to continue raising short-term interest rates in the near term, ending next year with its benchmark federal-funds rate at about 3%. The Fed held its benchmark rate near zero for much of the expansion and began gradually lifting it in 2015. Higher Fed rates, while keeping inflation from moving too much higher, could also help tamp down growth.
While the immediate outlook for the rest of 2018 is strong, economists see an 18% chance of a recession beginning in the next 12 months. Those are the highest odds since President Trump’s election 21 months ago. 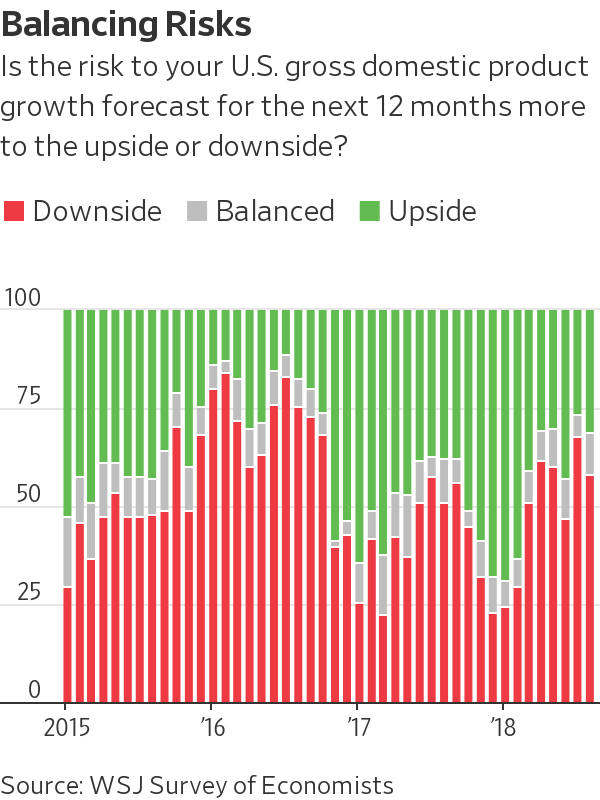 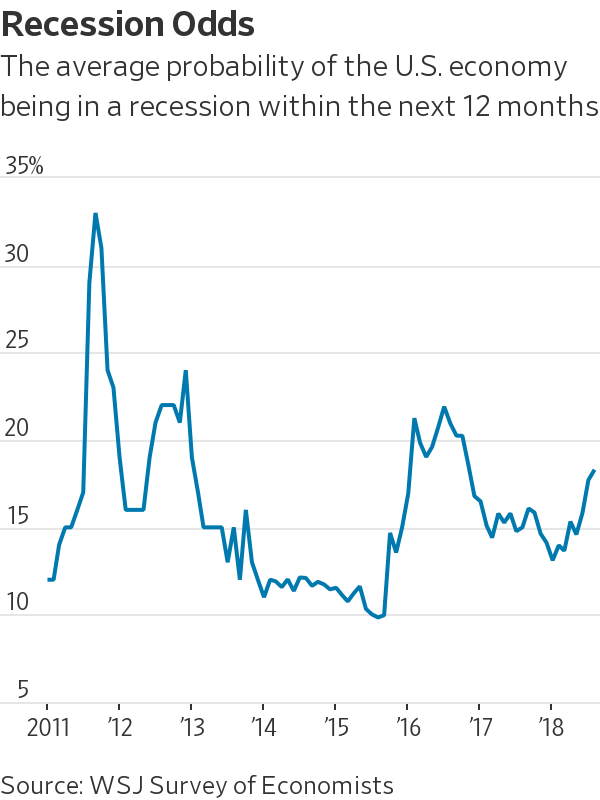 A number of major trade decisions hang over the economic outlook. The resolution of negotiations over the North American Free Trade Agreement is still unclear, potentially jeopardizing extensive trading relationships with Mexico and Canada. The administration is also considering imposing tariffs on imports of automobiles and auto parts., though tentative negotiations are under way with the European Union that could avert at least some of those tariffs.
The economists in the survey placed the odds of a Nafta pullout at about 29% and the odds of auto tariffs at 31%. Like with a recession, most think it will probably be avoided, but view the risks as uncomfortably high.
Asked to assess the risks to their forecasts, 58% of economists saw “downside risks,” meaning they think that if their forecasts are wrong, it is because the economy will have performed worse than they expected. But 31% saw “upside risks,” scenarios in which the economy performs better.
“If we avoid a trade war, and remove the threats of a trade war, we could see more much-needed business investment in the economy,” said Diane Swonk, chief economist of Grant Thornton.
The Journal’s survey of 57 business, financial and academic economists was conducted Aug. 3-7. Not every forecaster answered every question.
Write to Josh Zumbrun at Josh.Zumbrun@wsj.com