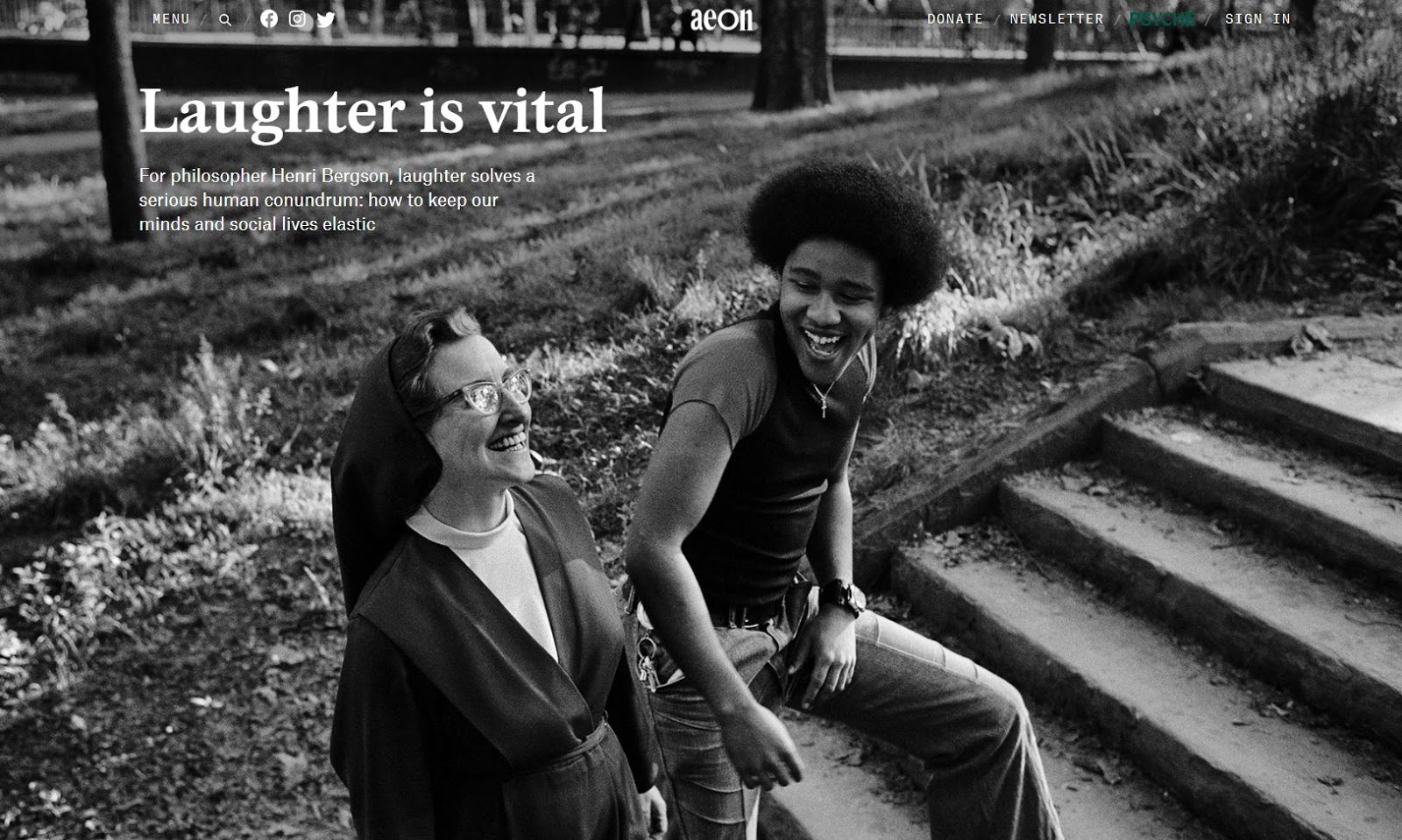 A Catholic nun and a young Hispanic immigrant in Central Park, New York, 1976. Photo by Richard Kalvar/Magnum
Emily Herring
is a postdoctoral researcher at the University of Ghent in Belgium. She is the co-editor of The Past, Present, and Future of Integrated History and Philosophy of Science (2019).
Listen here
Brought to you by Curio, an Aeon partner
3,400 words
Edited by Nigel Warburton

Cleese: What great opponent of Cartesian dualism resists the reduction of psychological phenomena to physical states?Jones: I don’t know that!Cleese: Well, have a guess.Jones: Henri Bergson.Cleese: Is the correct answer!Jones: Ooh, that was lucky. I never even heard of him!

The Pythons were well-versed in the history of philosophy (and in the drinking habits of Western philosophers). It therefore didn’t escape them that this particular French philosopher was also the author of a popular essay that focused on a phenomenon all comedians take very seriously: laughter.
Before Bergson, few philosophers had given laughter much thought. The pre-Socratic thinker Democritus was nicknamed the ‘laughing philosopher’ for espousing cheerfulness as a way of life. However, we know more about his thoughts on atomism than on laughter. Similarly, the section of Aristotle’s Poetics that dealt with comedy hasn’t come down to us. Other major thinkers who have offered passing, often humourless, reflections about humour include Thomas Hobbes and René Descartes, who believed that we laugh because we feel superior; Immanuel Kant and Arthur Schopenhauer who argued that comedy stems from a sense of incongruity; and Herbert Spencer and Sigmund Freud who suggested that comedians provide a form of much-needed relief (from, respectively, ‘nervous energy’ and repressed emotions). Bergson was unconvinced by these accounts. He believed that the problem of laughter deserved more than a few well-worded digressions. Although his theory retained elements of the incongruity and superiority theories of humour, it also opened entirely new perspectives on the problem.
The Monty Pythons could safely assume that Bergson’s name would come across as particularly obscure to an anglophone audience – the sketch plays on the incongruity of the old lady plucking this unfamiliar name from the air. However, when Bergson’s Laughter: An Essay on the Meaning of the Comic (1900) was published, his philosophy was discussed in most intellectual circles and, a few years later, he would become one of the most famous thinkers in the world. Why did a philosopher of such renown deviate from his more traditional and serious philosophical obsessions – the nature of time, memory, perception, free will and the mind-body problem – to focus on the apparently frivolous case-studies of slapstick, vaudeville and word play? And what was there to be gained from such analysis? The topic was a ticklish one. Laughter, wrote Bergson, had ‘a knack of baffling every effort, of slipping away and escaping only to bob up again, a pert challenge flung at philosophic speculation’. It was almost as though there was something unnatural about subjecting one of the most pleasurable and ubiquitous human experiences to dry philosophical speculation. Anyone who has ever had to explain their own joke knows that comedy cannot survive that sort of analysis. As the American authors E B White and Katharine S White put it in 1941:

Humour can be dissected, as a frog can, but the thing dies in the process and the innards are discouraging to any but the purely scientific mind.

While his book on laughter is hardly a rib-tickling read, Bergson didn’t wish to adopt the attitude of an anatomist observing a frog’s dead insides. He believed that laughter should be studied as ‘a living thing’ and treated ‘with the respect due to life’. His investigation was therefore more like that of a field zoologist observing frogs in the wild:

we shall not aim at imprisoning the comic spirit within a definition … We shall confine ourselves to watching it grow and expand.

Like all good metaphorical field zoologists, Bergson started his study by familiarising himself with his metaphorical frog’s natural habitat: in other words, the conditions under which laughter is most likely to appear and thrive. Following this method, Bergson arrived at three general observations.

The first one, according to Bergson, was so ‘important’ and ‘simple’ that he was surprised it hadn’t attracted more attention from philosophers: ‘The comic does not exist outside the pale of what is strictly human.’ When Bergson wrote these words, he couldn’t have foreseen that, a century later, through the power of the internet, one of the most popular forms of comedy would be provided by our own pets in the form of viral videos, memes and gifs. But, in a way, he anticipated it in what he wrote about laughter directed at non-humans:

You may laugh at an animal, but only because you have detected in it some human attitude or expression.

Consider for instance the viral sensation of Grumpy Cat (now sadly deceased). Her perpetual scowl makes us laugh because it is relatably human. The essence of her comedy lies in the fact that she is a humanlike cat. The same goes for inanimate objects that make us laugh. The American vaudeville performer Will Rogers once quipped: ‘An onion can make people cry but there’s never been a vegetable that can make people laugh.’ Enter the internet with its millions of more-or-less safe for work anthropomorphic vegetable content to prove him wrong. According to Bergson, it is possible to laugh at vegetables and nonsentient things, but only on the condition that we are able to detect the human in them:

You may laugh at a hat, but what you are making fun of, in this case, is not the piece of felt or straw, but the shape that men have given it, – the human caprice whose mould it has assumed.

Bergson’s second observation might appear counterintuitive to anyone who has been reduced to tears by a fit of uncontrollable giggles: ‘Laughter has no greater foe than emotion.’ But his point was that certain emotional states – pity, melancholy, rage, fear, etc – make it difficult for us to find the humour in things we might otherwise have laughed at (even anthropomorphic vegetables). We instinctively know that there are situations in which it is best to refrain from laughing. Those who choose to ignore these unspoken rules are immediately sanctioned, as the American comedian Gilbert Gottfried learned the hard way. While most major US late-night comedy shows halted production in the weeks following the terrorist attacks of 11 September 2001, Gottfried provided a textbook case of a joke being ‘too soon’ during a comedy roast that took place before the month had ended:

I have to leave early tonight, I have a flight to California. I can’t get a direct flight – they said I have to stop at the Empire State Building first.

vanity, though it is a natural product of social life, is an inconvenience to society, just as certain slight poisons, continually secreted by the human organism, would destroy it in the long run if they were not neutralised by other secretions. Laughter is unceasingly doing work of this kind.

In other words, according to Bergson, laughter serves a social function: its purpose is to gently but firmly correct these socially ‘inconvenient’ attitudes. We laugh at people who are either too eccentric or too inflexible to allow for society to evolve and better itself. It is in this sense that laughter is punitive:

society holds suspended over each individual member, if not the threat of correction, at all events the prospect of a snubbing, which although it is slight, is none the less dreaded. Such must be the function of laughter.

But for Bergson, laughter doesn’t exclusively punish attitudes that we deem reprehensible. Homer Simpson’s morally irreproachable neighbour Ned Flanders is proof that even virtue can be ridiculous when portrayed as a form of mental rigidity. Laughter awakens us to the inelasticity of certain personality traits or behaviours and, in doing so, dissuades us from becoming too settled in our own ways.
Bergson’s critics have complained that his theory of humour is too restrictive, that his repetitive characterisation of the comedic as ‘something mechanical encrusted upon the living’ becomes laughable in its own terms, trying to fit a complex and spontaneous living phenomenon under the same rigid formula. But Bergson claimed that, rather than a clear-cut definition, this formula was a ‘leitmotiv’: representations of mechanised life constitute a common thread in many different forms of comedy. His theory didn’t preclude that we might laugh at things that are not obviously mechanical, nor that the mechanical might not be the only source of laughter. What mattered to Bergson was to understand laughter as a product and a part of life.
By giving comedy the attention it deserved, Bergson opened new perspectives on difficult philosophical questions about the relationship between biology and art, the evolution of human societies, and our own humanity. The philosopher recognised that laughter doesn’t always bring out the best in us – it can be used to mock and degrade others. But at its core, its function is to remind us that to be human is to be alive and free. Bergson’s book on laughter therefore raised the status of a problem that has often been deemed unworthy of serious philosophical study. In Monty Python’s Flying Circus (2008), the film scholar Darl Larsen writes that Bergson’s theory ‘seems to have been an influential work on the Pythons’ because, by proposing a theory of laughter, ‘the respected Bergson elevated the study of comedy to a more academic level, worthy of study in works looking at aesthetics and philosophies of art forms’. In another sketch, Cleese (playing a reporter) is caught on air mid-conversation explaining that he adheres ‘to the Bergsonian idea of laughter as a social sanction against inflexible behaviour’. This was perhaps the Pythons’ way of paying homage to Bergson: despite all its silliness, they too believed that comedy should be taken dead seriously.
Thinkers and theories Meaning and the good life History of ideas
7 July 2020
Posted by Cabecilha at 6:11:00 PM No comments: