How Bunny Yeager invented the pin-up

How Bunny Yeager invented the pin-up

An interview with pin-up photographer Bunny Yeager, who has died aged 85

Image 1 of 5
Bettie Page and Yeager on location at Africa USA, a zoo theme park in Florida with no cages where visitors could safely interact with the animals. Photo: Bunny Yeager Productions

By Lucy Davies
3:00PM BST 28 May 2014
This article was first published in September 2012
You’ll know her work, if not her name. Bunny Yeager was the stills photographer for Ursula Andress during the filming of Dr No. The famous white bikini, shell in hand publicity shot came courtesy of Yeager’s camera. She took it while sharing a raft with the rest of the film crew, balanced over a muddy swamp, in an act of gung ho can-do-ism that was typical of her whole career.
When she wasn’t hobnobbing with stars, Yeager made a living shooting cheesecake portraits of comely, curvaceous women in and around her home in Florida. Pre-feminism – in fact twenty years before the first issue of seminal women’s weekly Ms was published, and the Female Eunuch just a twinkle in Germaine Greer’s pencil - Bunny Yeager was already making waves in a distinctly male arena.
In the early Fifties, magazines such as Rogue, Wink, Cad and Caper were powering a market for the type of pin-up shots that Yeager perfected. Her images, now collected together in Bunny Yeager’s Darkroom, became some of the most the most influential of the era, establishing a pert, burlesque style that would infiltrate fashion, music and film for years to come.
With her wide cheekbones, inked eyebrows, and long, shapely legs, Yeager had a special beauty of her own. Born Linnea Eleanor Yeager in a tiny steel town near Pittsburgh, she rechristened herself Bunny after a character played by Lana Turner in the 1945 Weekend at the Waldorf.

After high school in Florida she became hot property as a fashion model, but she had a problem: it was expensive to hand out pictures to prospective clients, and photographers charged extortionately for prints. Undefeated, she took herself to college to learn to make copies, discovering quite by chance that she was far more talented at wielding the camera than most of the men she had posed for.
A teacher encouraged her to send her work to a magazine, and after scouring the newsstands she chose a newcomer called Playboy. “Nobody had heard of Hugh Hefner” she tells me. “But I figured because they were new they might pay attention to an amateur, and that’s what happened. Hugh offered me $100 (about $850 today). If I hadn’t have made that early connection when he was just starting out, maybe I wouldn’t have got such a big push, but immediately I became employable.”
The pictures in question showed the relatively unknown Bettie Page. Pictured decorating the Christmas tree in nothing but a red and white fur cap it was the first of a series of collaborations between the two women that would establish both of their careers, though the partnership remained a working one: “we didn’t have time to be friends. She liked me, and she liked to pose for me, but I could only afford to pay her for 90 minutes a time and we spent every minute shooting. She was very good at taking direction.”
In fact Yeager had an arsenal of tricks up her sleeve. Working alone “I wasn’t lazy… I knew how to make the most out of somebody just by touching up their make-up or fixing their hair a little a bit and guiding their pose, moves of the hand, whatever it took to get a good picture.”
Yeager had taught herself these tricks through hours of shooting herself in her own home, in the sorts of coquettish poses that were sure to enthral male readers. “I saw there was a rhythm to this thing, so I wrote a book [How I Photograph Myself] so that any girl could read it and become a good model. Even if she just wanted to take one beautiful picture of herself she could do it in the privacy of her home instead of going to a strange male photographer and being embarrassed taking off her clothes.”
The chief remit of her book is to emphasise that any women can look good with the right attention. “What a boring place the world would be if every woman looked the same as the next…Make the most what you have and enjoy being female; enjoy being YOU.”
These women have curves and even visible cellulite. “I don’t like the skinniness” she says of today’s ideal. “I like to see a model who has meat on her bones. For fashion, maybe you need to show off the clothes, but if you want to show off a beautiful woman, you need her to be shapely, to show that she is a woman.”
Now 83, she shows no signs of slowing. Last year she acted as Grand Marshal for a three day festival of marching bands and vintage cars along Miami’s Ocean Drive. She still photographs too – her last self-portrait was taken only last year – and has just moved into a new studio near her home, where she continues to write books. This is her 32nd.
Of the rarity of her success in a male-dominated arena she is reticent. “I didn’t know anybody else who was doing it, sure, but I wasn’t paying attention to what other people were doing, I just got involved in my work and it took me from one step to another. I was just confident my work was good.”
'Bunny Yeager’s Darkroom’ by Petra Mason (Rizzoli, £37.50, published Sep 25) is available to order from Telegraph Books at £33.50+£1.35p&p. 0844 871 1516; books.telegraph.co.uk 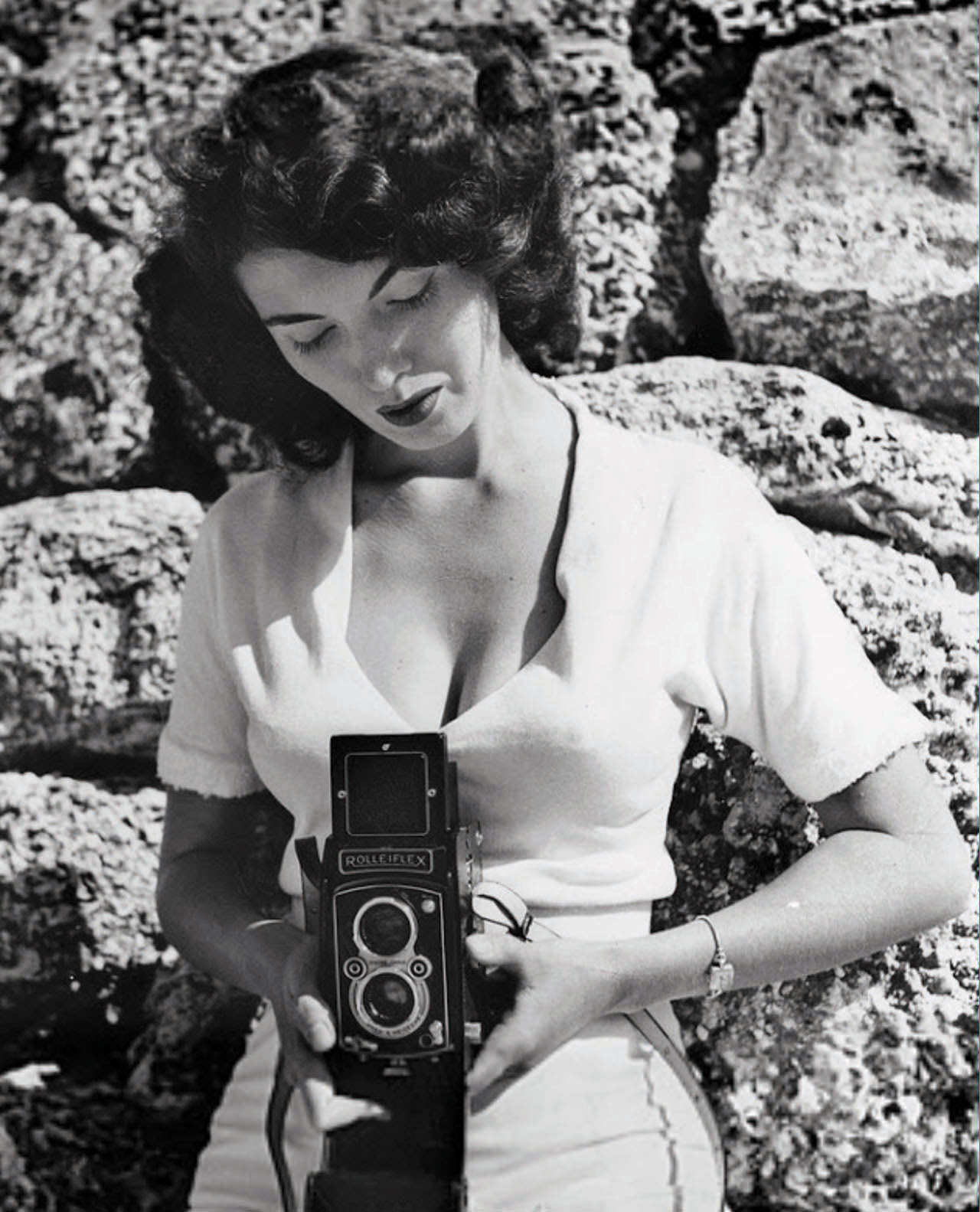 During a recent conversation I was asked my thoughts on the ‘boom’ in popularity of pin-up style photography which led me to discuss the iconic Bettie Page, who it’s fair to say is generally hailed as the original pin-up queen. Of course we’re now quite used to seeing images of models posing provocatively, pouting at the camera or cheekily looking down the lens. Maybe they’re wearing lingerie, swimwear, or perhaps they’re nude but the sheer volume of such titillation means the impact has somewhat been diluted and it’s just become a norm of daily life.
Now that we’re completely bombarded with images featuring nudity it’s quite hard to believe that it wasn’t actually that long ago that laws on producing nude photography were incredibly strict, resulting in secret camera clubs being created and an under the counter attitude for the images produced. The shock factor of scantily clad or nude models was very real and caused public outrage. 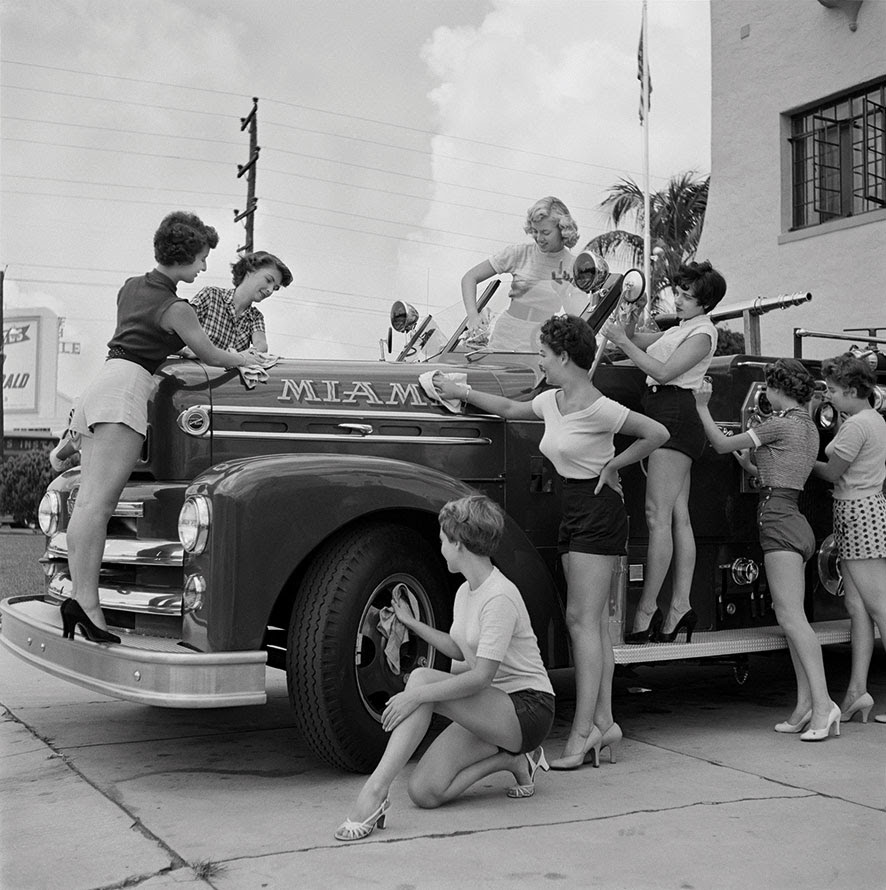 Models at the Miami Fire Department. 1955 © Bunny Yeager
Model Bettie Page, with her uninhibited nature and her stunning looks was an instant hit with photographers. Happy to pose in lingerie or nude, the thousands of photos of Bettie Page provide a remarkable archive of photographic and fashion history. Amongst this huge archive of imagery are thousands of pictures taken by female photographer Bunny Yeager, who is credited with making Page a famous name along with photographer Irving Klaw.
When one thinks of some of the great names of photography it’s an easy list to start but amongst the big names that often

get bandied around such as Arbus, Newton and Bailey, one name that doesn’t come up perhaps as much as it should is model turned photographer Bunny Yeager.
Linnea Eleanor Yeager was born in Wilkinsburg, Pennsylvania in 1929. Growing up to become a successful face on her local beauty pageant scene the transition to modelling was an easy one and it’s unsurprising that she went on to become a much photographed model in the 1940s. Seemingly very switched on to the commercial world of photography, Yeager upon realising that handing out images to prospective clients was an expensive game, took herself off to college to learn how to produce her own copies so she could market herself more effectively.
Her photography course taught her much more than the darkroom skills she sought of course and it became clear that the images she was producing with her camera were of a standard where she could incorporate them into her plans for the future. Encouraged by her tutor to submit her work to magazines, Yeager studied the market and found Playboy was just emerging. Successfully submitting images, she was rewarded with published work, $100 and a connection that would help skyrocket her career in the form of Hugh Heffner.
Upon embarking upon a photography career however she didn’t retire from modelling, in fact her ability to be at ease with bringing the glamour in front of the camera was something she continued to work with in the forms of self-portraiture. Posing in bathing suits which she often designed and made herself for her statuesque 5ft 9in frame, her self-portraits were eventually turned into a book, ‘How I Photograph Myself’ (1964).
Yeager is a striking reminder that selfies are not just creations of the digital age, self-portraiture is nothing new, the way we share our images has of course changed, but turning the camera on oneself has been happening since the birth of photography. However as a female photographer these images of herself were forward thinking for their time and as a creative person, she was a force to be reckoned with indeed. A skilled photographer, she is renowned for pushing boundaries 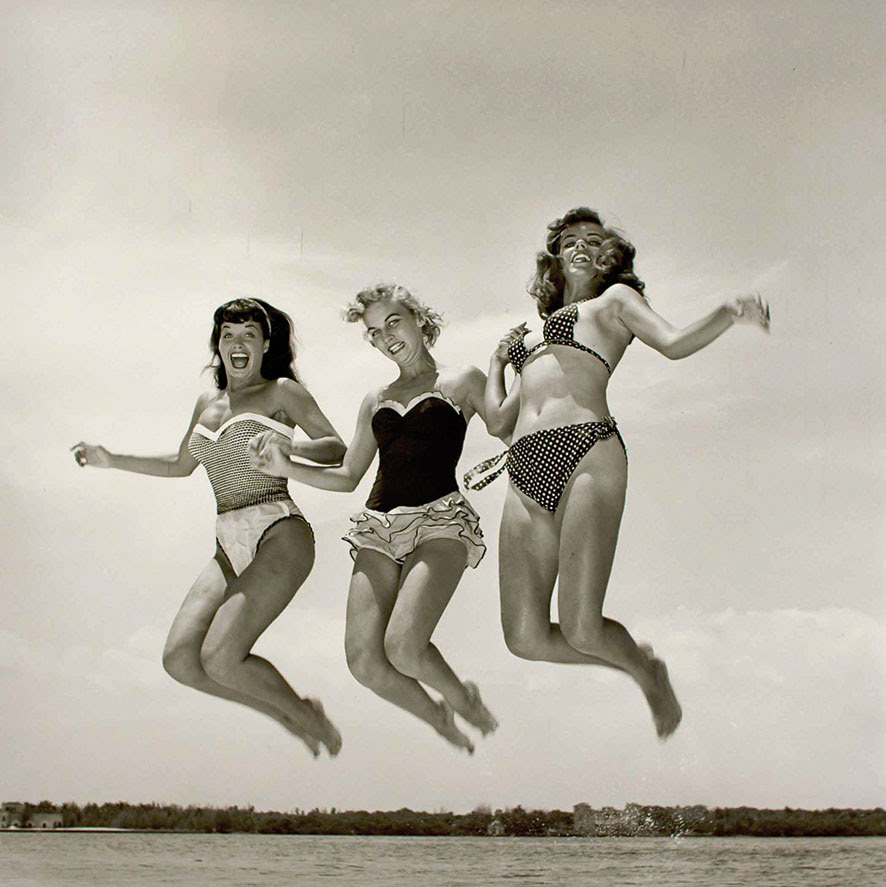 Bettie Page, Carol Jean and friend on the beach, circa 1955 © Bunny Yeager
and developed a photographic style which has inspired image makers in various media for decades.
Having shot for Playboy numerous times, her magazine credits also include mainstream titles such as Cosmopolitan and if you ever wondered who took that legendary photograph of Ursula Andress in that iconic white bikini complete with shell in hand? Yes that was Yeager which she took whilst working as a stills photographer on ‘Dr No’ (1962). Even if you had never heard of Bunny Yeager until now; it’s more than likely that you have definitely seen her work.

In writing about the career of Bunny Yeager it can’t go unmentioned that she also made numerous appearances on film too, yes amongst all her various creative talents she also turned her hand to acting including small roles in ‘Lady In Cement’ (1968) and ‘Porky’s’ (1981).
Photography wise, a change of direction beckoned in the 1970s, the adult magazine industry was evolving, the portrayal of nudity was becoming less playful and poses more graphic. This wasn’t a style Yeager wanted to work in and is quoted as saying – “The kind of photographs they wanted was something I wasn’t prepared to do.”  Instead she carried on her professional practice which included an array of projects including photography, exhibitions and writing just to name a few of her pursuits.
Her years in front of the camera may have afforded her the ability to achieve what she wanted from other models but it has to be made clear a main factor behind getting her subjects trust must surely have been Yeager’s personality. She seemed to have a charisma which charmed, intrigued and inspired so many. What comes across in any interview you read with Yeager is her appetite for life and amongst her many legacies, this incredible woman’s zest for enjoying the world around her is a lesson it might be wise for us to all embrace.