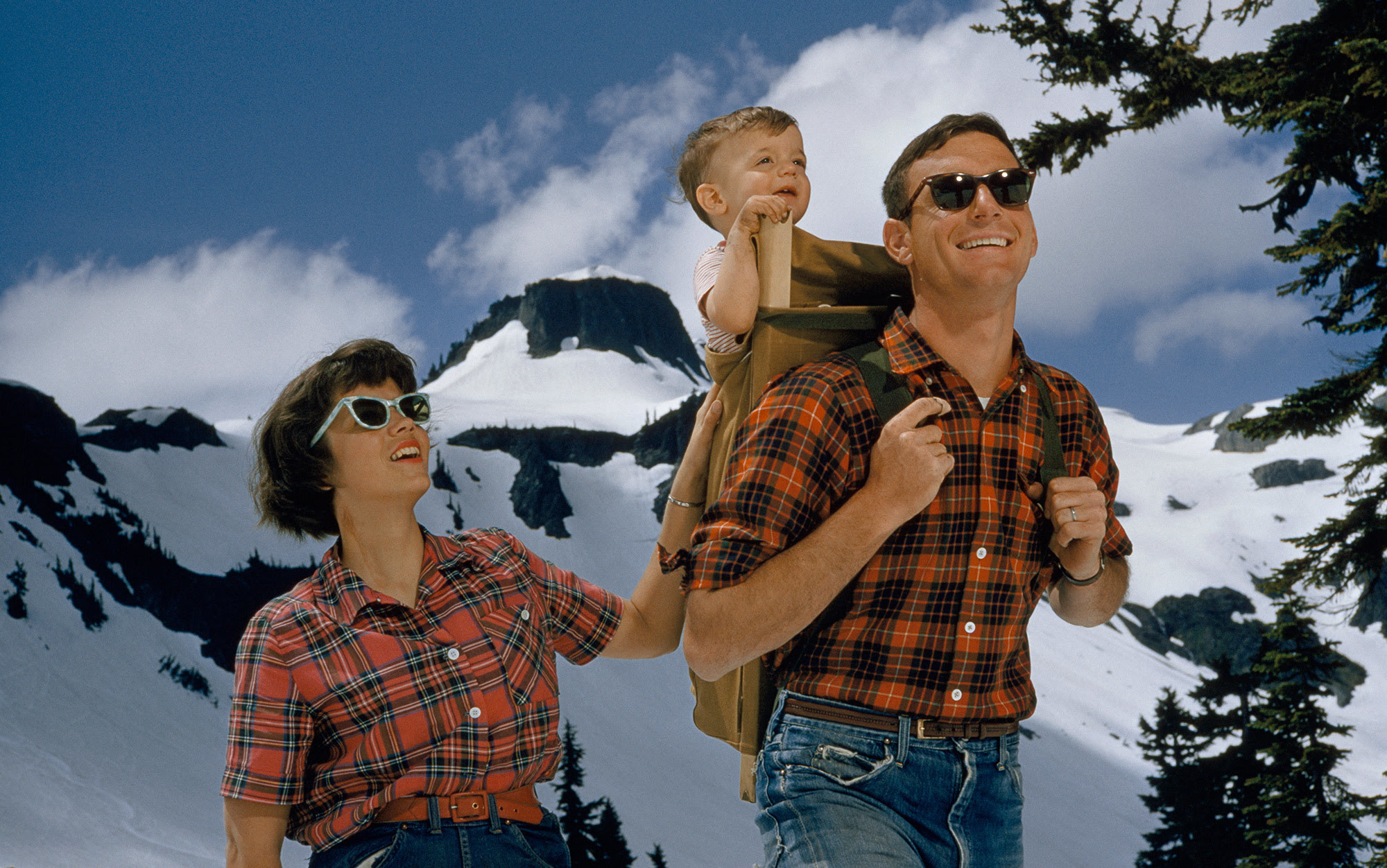 Practising the Greek virtues of wisdom and courage is one thing. But being cheerful the American way borders on psychosis

Photo by B Anthony Stewart/National Geographic/Getty
Mariana Alessandri
is assistant professor of philosophy and affiliate faculty in Mexican-American studies and gender and women’s studies at the University of Texas Rio Grande Valley. Her work has been published in The New York Times and New Philosopher, among others.
2,300 words
Edited by Sam Dresser

Find out more
I once ended up at a Boy Scout ceremony in the northeast United States, where I inhaled the American spirit unfiltered. The boys’ uniforms had Stars-and-Stripes patches sewn on next to their badges. We recited the Pledge of Allegiance in front of an oversize US flag, and we prayed to America’s vague God, giving thanks for this and that, and asking for some strength or protection. The boys recited their Scout Law: to be trustworthy, loyal, helpful, and… cheerful.
As a philosopher influenced by Friedrich Nietzsche, I’d always imagined cheerfulness was a sickly child, born nine months after a Tinder date between Stoicism and Christianity. But that night I learned that cheerfulness was a British orphan smuggled into the US in the early 20th century, and was now making a living spreading itself all over contemporary American kitsch: throw pillows, coffee mugs and slippers. Cheerfulness has planted deep roots in US soil, and the poor Boy Scouts are made to believe she’s a virtue.
The Ancient Greeks named four virtues: temperance, wisdom, courage and justice. Aristotle added more, but cheerfulness wasn’t one of them. The Greek philosophers didn’t seem to care about how we felt compared with how we acted. Aristotle said that we would ideally feel good while acting good, but he didn’t consider pleasure necessary for beautiful action. Acting virtuously meant steering clear of excess and deficiency. But in order to reach his ‘mean’, we need to jettison every action that misses the mark. Most of the time, the mean is incredibly tough to find, but if it came down to a choice between feeling good while acting badly or feeling badly while acting good, Aristotle said to choose good behaviour. He understood that feelings are hard to control, sometimes impossible, but he also knew that positive feelings like to hang around virtuous actions. While we’re waiting for the good feelings to show up, he asked us to get to work on temperance, wisdom, courage and justice. But he never said anything about smiling through it.
The Roman Stoics inched closer to prescribing cheerfulness when they decided that we should pay attention to our feelings. They believed that we could control our attitudes. But even they didn’t champion cheerfulness, despite the American translators who try to poison them with it. For example, Marcus Aurelius, in his Meditations, advised himself to be εὔνους, literally ‘good-minded’. This was translated into English as ‘good-natured’ by Francis Hutcheson and James Moore in 1742 in Scotland, and then as ‘benevolence’ by the British translator George Long in 1862, before returning to ‘good-natured’ in 1916 under the influence of another British translator, C R Haines. In 2003, Gregory Hays, from Indianapolis, translated εὔνους as ‘cheerfulness’. Maybe Hays was a boy scout. Or Christian. Or both.

To the Stoic list of virtues, the Christians added faith, hope and love. These are a gift from God, unlike patience and justice, which can be achieved on our own. Faith is the belief that with God all things are possible; hope is risking that belief in real time; and love is willing to be wrong about it. These three add an undeniably emotional element to the mix of virtues, but even Jesus didn’t ask for cheer. The closest he got was telling the disciples not to look depressed when they fasted. Paul got even closer when he declared that ‘God loves a cheerful giver’. But the original Greek still sounds more like ‘God loves it when you give without needing to be persuaded’ than like the Boy Scout definition of cheerfulness. But Paul also said that Christians should ‘do everything without grumbling and arguing’. The pivot from action to attitude started by the Stoics and egged on by the Christians set the historical stage for Scout Law in the US.
In 1908, the British Lieutenant-General Robert Baden-Powell created (what would become) the worldwide Boy Scouts movement. He intended to instil good old Christian values into good old British boys. Cheerfulness and other newborn virtues soon circled the globe, hitting the US in 1916. Eventually, the Boy Scouts Association in the UK dropped it: they don’t need to be cheerful any more, according to their Scout Law, even though it was their idea. The lifting of mandatory cheerfulness reflects contemporary British culture, just as the policing of cheerfulness in the US reflects ours.
The Boy Scouts of America associate cheerfulness with positivity: a Scout should ‘look for the bright side of life. Cheerfully do tasks that come your way. Try to help others be happy.’ Instead of grumbling while he toils, a cheerful Boy Scout will cultivate a joyful attitude. He will ‘jump at opportunities’ that others won’t, and is more likely to find difficult tasks more enjoyable than others. Finally, a good Boy Scout believes that cheerfulness is infectious and can spread to those around him.
If you have to tell someone to be cheerful, they aren’t feeling it
It’s no surprise that cheerfulness was embraced not only by Boy Scouts but by the greater American culture too: the US is a melting pot of Christianity, Stoicism, cognitive behavioural therapy, capitalism and Buddhism, all of which hold, to varying degrees, that we are responsible for our attitudes and, ultimately, for our happiness. A quick browse through the self-help section of any US bookstore announces that lots of Americans are desperate to bootstrap their way to the bright side. Texts on embracing life’s miserable condition don’t exactly fly off the shelves. However, books on how optimism can be learned make millionaires out of their authors. They tell us that the key to happiness is positivity, and that the key to positivity is cheerfulness. The aorta of the US economy pumps out optimism, positivity and cheerfulness while various veins carry back US dollars naively invested in schemes designed to get rich quick, emotionally speaking.
Socrates was right in the Symposium when he said that we are attracted to what we are not, and the psychologists behind production and marketing know better than we do the ubiquity of US anxiety, depression and restlessness. Many of us who might not be cheerful by nature get pressured to smile by the reigning notion that we alone are responsible for our happiness. Window-shop in any middle-class city and you will discover a consumer culture desperate to live up to the adage ‘Think like a proton: always positive!’ Homeware stores are filled with reminders of how happy we could be if only we’d listen to our kitschy teacups with printed pseudo-philosophical adages such as ‘Continuous cheerfulness is a sign of wisdom,’ except that teacups don’t know the first thing about cheerfulness or wisdom, or whether they relate to happiness. Look at Denmark: the Danish are not particularly cheerful but, if the statistics are to be believed, they are happier than most. I’ve been to Denmark, and it’s not defiled with messages to ‘Keep calm and focus on cheerfulness.’
If you have to tell someone to be cheerful, they aren’t feeling it. Cheerfulness spontaneously felt and freely given is brilliant, but it is no more virtuous than acting courageously when one isn’t scared. Aristotle insisted that virtuous action be independent of, and sometimes contrary to, our feelings. In other words, virtuous action must be deliberate to count as virtue.
Baden-Powell knew this, and in 1908 he reminded his Boy Scouts that, when something annoying happens:

you should force yourself to smile at once and then whistle a tune, and you will be all right. A scout goes about with a smile on and whistling. It cheers him and cheers other people, especially in time of danger, for he keeps it up then all the same.

How the dualism of Descartes ruined our mental health


James Barnes
is a psychotherapist working in San Francisco, and a writer with postgraduate degrees in philosophy and religion.
1,400 words
Edited by Sam Dresser 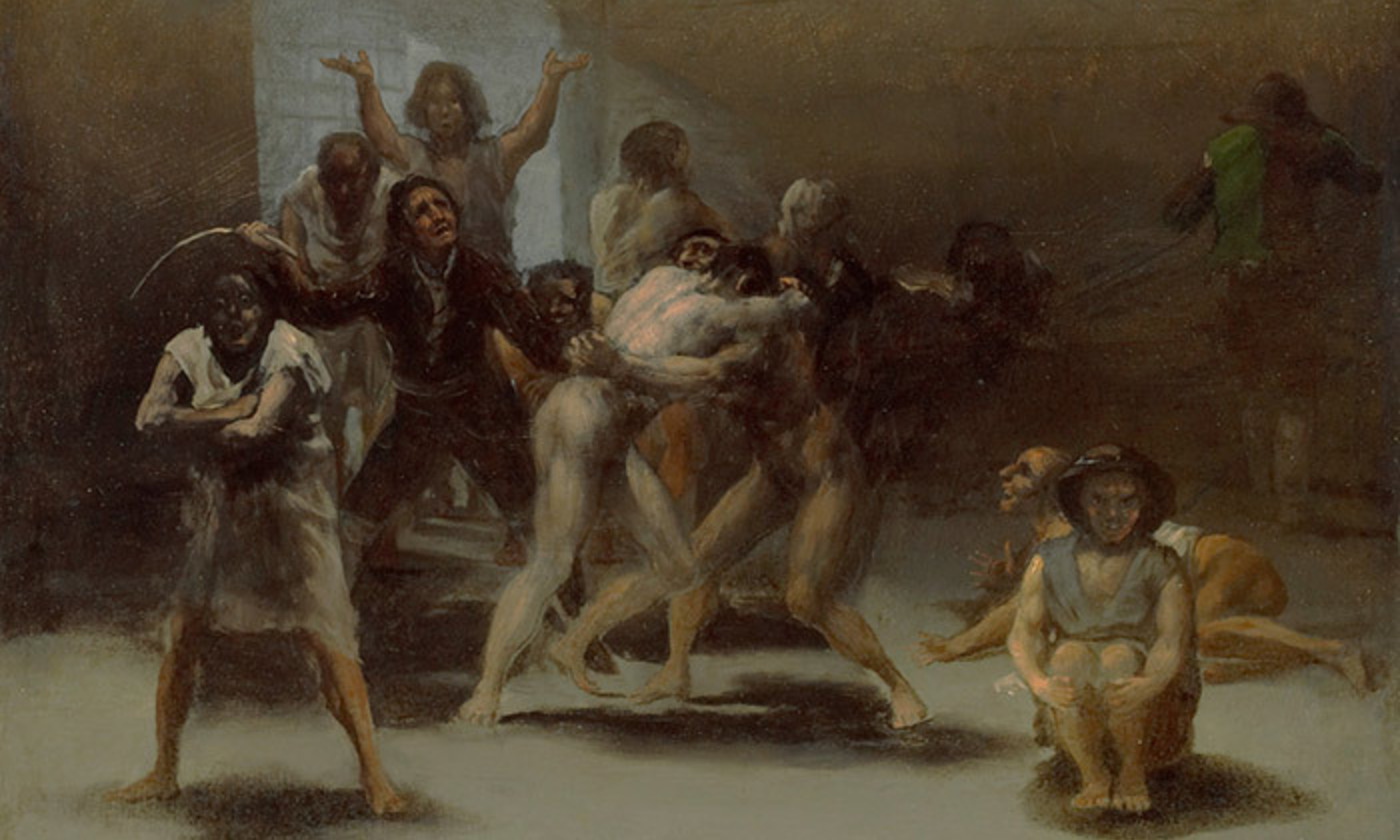 Yard with Lunatics 1794, (detail) by Francisco José de Goya y Lucientes. Courtesy Wikimedia/Meadows Museum, Dallas
Toward the end of the Renaissance period, a radical epistemological and metaphysical shift overcame the Western psyche. The advances of Nicolaus Copernicus, Galileo Galilei and Francis Bacon posed a serious problem for Christian dogma and its dominion over the natural world. Following Bacon’s arguments, the natural world was now to be understood solely in terms of efficient causes (ie, external effects). Any inherent meaning or purpose to the natural world (ie, its ‘formal’ or ‘final’ causes) was deemed surplus to requirements. Insofar as it could be predicted and controlled in terms of efficient causes, not only was any notion of nature beyond this conception redundant, but God too could be effectively dispensed with.
In the 17th century, René Descartes’s dualism of matter and mind was an ingenious solution to the problem this created. ‘The ideas’ that had hitherto been understood as inhering in nature as ‘God’s thoughts’ were rescued from the advancing army of empirical science and withdrawn into the safety of a separate domain, ‘the mind’. On the one hand, this maintained a dimension proper to God, and on the other, served to ‘make the intellectual world safe for Copernicus and Galileo’, as the American philosopher Richard Rorty put it in Philosophy and the Mirror of Nature (1979). In one fell swoop, God’s substance-divinity was protected, while empirical science was given reign over nature-as-mechanism – something ungodly and therefore free game.
Nature was thereby drained of her inner life, rendered a deaf and blind apparatus of indifferent and value-free law, and humankind was faced with a world of inanimate, meaningless matter, upon which it projected its psyche – its aliveness, meaning and purpose – only in fantasy. It was this disenchanted vision of the world, at the dawn of the industrial revolution that followed, that the Romantics found so revolting, and feverishly revolted against.