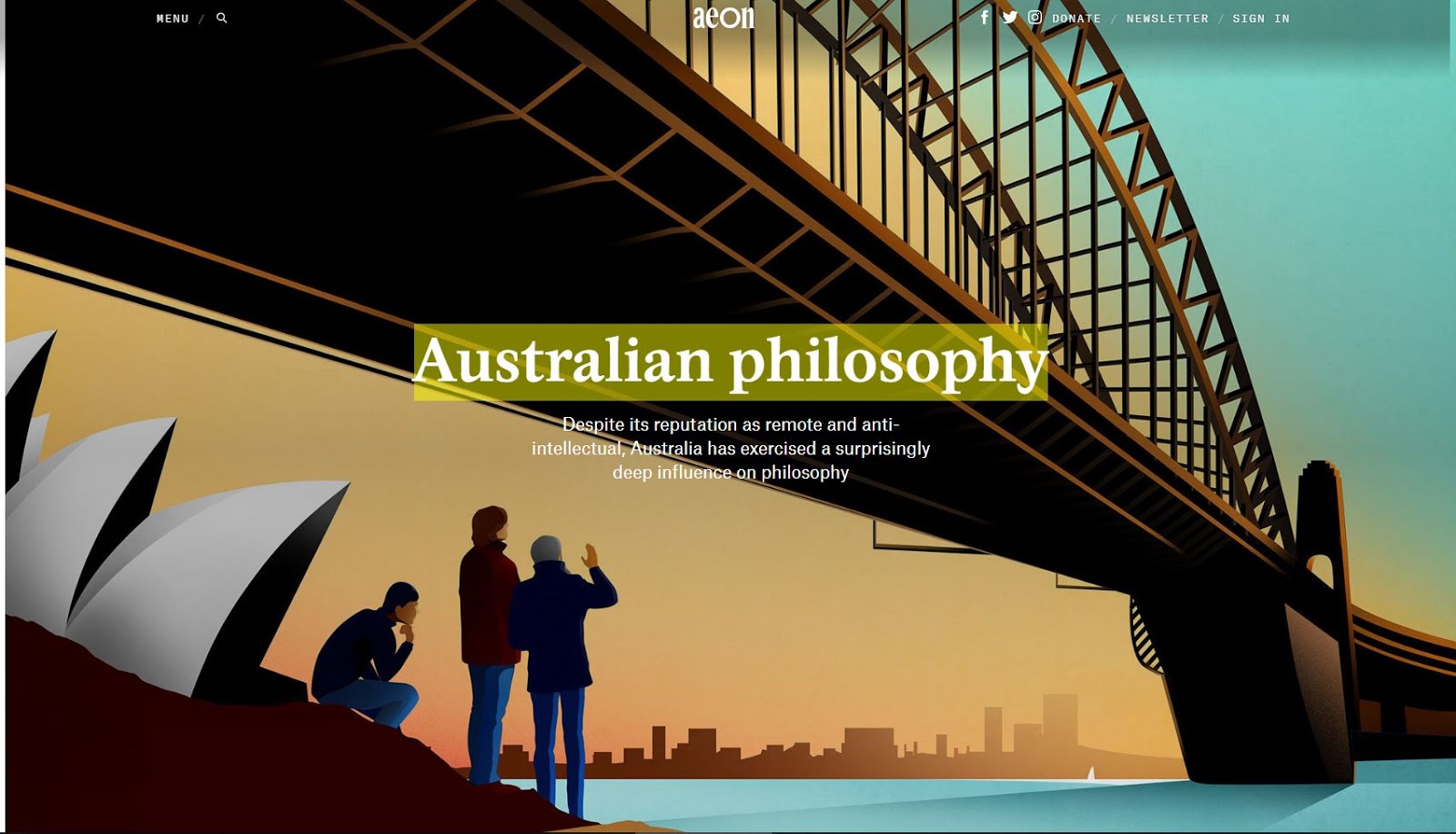 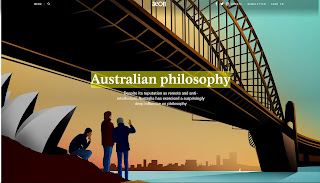 Despite its reputation as remote and anti-intellectual, Australia has exercised a surprisingly deep influence on philosophy

Illustration by Matt Murphy/Handsome Frank
Peter Godfrey-Smith
is professor of history and philosophy of science at the University of Sydney. He is the author of Other Minds: The Octopus, the Sea, and the Deep Origins of Consciousness(2016). He lives in Sydney.
4,700 words
Edited by Nigel Warburton

Find out more
In 1988 I travelled from Sydney to San Diego, California, to start a PhD in philosophy. That trip looks like a short hop now, but back then it seemed a long way. I had just finished an undergraduate philosophy degree at the University of Sydney. After I arrived, part of my training for the PhD was to work as a teaching assistant (or tutor) for a course in moral philosophy. The course syllabus, I was surprised to find, was full of Australians: Peter Singer, John Mackie, Jack Smart.
At Sydney I had worked especially in the philosophy of mind, and learned early on that there was a family of views called ‘Australian materialism’. This suggested that Australia meant something in philosophy. I had also seen at Sydney a series of visitors from very good American universities, who had all said that the philosophical scene in Australia was unusually strong. But it was natural to wonder whether they were being gracious as guests. I knew also that I was joining a stream of Australian students who had gone to graduate school overseas. But I was still surprised to find, in an area of philosophy far from mine, all those Australians on the syllabus.
Australia has had an outsized influence on philosophy, especially in the middle and late-20th century. The field still shows a broad Australian footprint. For many years, Princeton University in New Jersey, perennially one of the highest-ranked philosophy departments, has had three or four Australians on its faculty (depending on when you look and on how you count Australians). Princeton has always been an especially clear case, but the influence is all over, an ongoing export of both people and ideas. Given the modest size of Australia (with a population of about 25 million now, but under 17 million until the end of the 1980s), and the popular image of the country’s intellectual life, this is a bit surprising. What is going on? How did this happen?
What you think about all this depends on what you think is valuable and worthwhile in philosophy, a topic subject to enormous disagreement. Many qualified people think that Martin Heidegger, for example, was the most breathtakingly original and important philosopher of the past century. Other qualified people think that he was an obscurantist Nazi windbag. Australia has not produced someone as polarising as Heidegger, but here, as elsewhere, there is a lot of disagreement about how philosophy should be done.
Some of this disagreement can be described with a distinction between ‘analytic’ and ‘continental’ philosophy, a terminology that is serviceable, though it misleads in some ways. The divergence dates from the early and mid-20th century. The analytic style is more associated with English-speaking work, and the continental style has been more influenced by German and French 20th-century developments.
The two approaches are perhaps now best seen as differing on the goals of doing philosophy. One philosophical goal is the investigation of difficult and abstract questions in a clear and argumentative way (analytic). The writing that results is often rather dry and unexciting. On the continental side, versions of traditional philosophical questions are usually still in view, as is a deep concern with the history of the field, but the activity of philosophy becomes an arena for political and aesthetic gesture, and for a highly personal working-through of topics such as death and alienation. Clear communication is willingly sacrificed to further novel and radical possibilities of thought. A problem on the analytic side of philosophy is a tendency to expend enormous energy on narrowly technical puzzle-solving that has lost touch with significant problems. Avoiding empty pretension is a problem on the continental side.
‘Continental’ is a misleading term in some ways, as the analytic style is very strong in some parts of Europe, especially in the Nordic countries and Spain, while the continental style has significant outposts in all English-speaking countries.