The Bullet Bra: To the point history into the brassiere a vintage sirens lingerie staple

The Bullet Bra: To the point history into the brassiere a vintage sirens lingerie staple 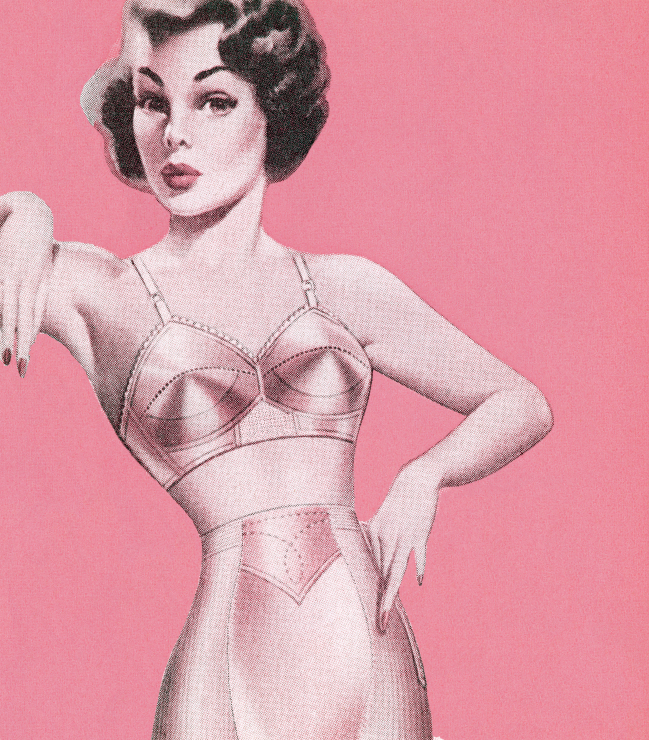 After the world war 1 corsetry in America was deemed unpractical and uneconomical. Within the 1920's corsets became shorter and provided less support for the bust, therefore creating a whole seperate garment purely to support the breasts. The 1920's saw a fashion of the flapper. A look that endorsed the more streamline, boyish silhouette. Curves where not deemed fashionable. The brassier at the time was just light support bandeaux style thats purpose was to flatten the breasts. A socialite of New York city approx 1913 was a huge influence for women by creating a bandaux bra by tying two hankicheifs together with ribbon. 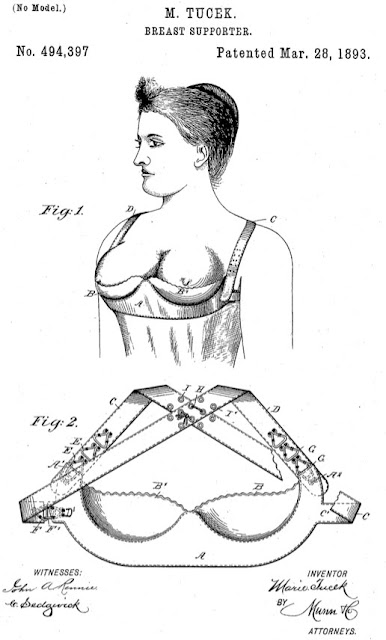 above: A slightly earlier example of a brassier: 1893 worn with a corset
Russian imagrant  Ida Rosenthal, A New York Seamstress worked along side husband and boutique owber Enid Bisett. They discovered a break through with womens Bras and this was that not all women would fit in the same bra size and invested their business into crateing brassiers for all ages and sizes of women. Their business titled Maiden form was a deliberate ironic contrast to the androgynous silhouette. Their aim was to turn the bandeaux into a more structured bra that would flatter a womens shape whilst creating support under their clothes. 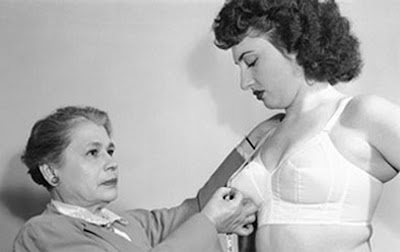 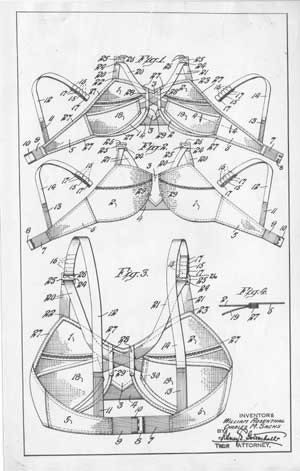 The 1930's was a break through decade for brassier technology. The term bra was used more often by the younger population of girls.
Within the 1930's a company S.H Camp and company created the alphabet coding for bra sizes. ie. A, B , C &D. several companys took on this formuler towards the end of the 1930's. The 1930's introduced the waist band with the adjustable hook and eye features in the 1930's. Also the technology with materials opened lots more doors for choice in fabric, elastication, patterns and colours.   For the flatter chested women, bras could now be designed with some padding to enhance their bust and cleavage. The lingerie industry became a fast growing and profitable industry within the US. Major cities sold ranges in department stores. 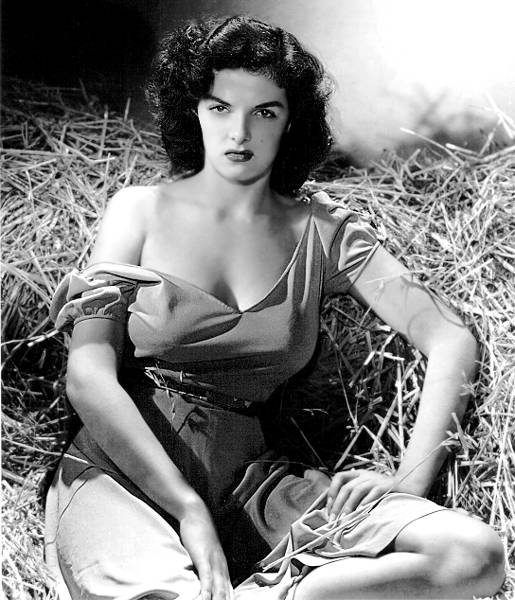 Jane Russell
The pointed bust became extremely popular throughout the 1940's. Hollywood glamorised this look, and pin up girls aka "sweater girls"  and young starlets such as  Marilyn Monroe, posed in their tight fitted knit sweaters with their structured and pointed assets. The second world war in fact influenced many of womens beauty products, and where created in relation to the war. The Bullet bra also known as the torpedo bra was a reaction from the war. The look was to create for womens bust to be more conical and pointed in shape for an exagerated, wholesome and veluptuous apperance.  Jane Russel was famed for her assets and like the scene in The Aviator, inventor Howard Hughs was a huge fan of her and the technology behind the bra. The 1940's saw underwired bra come into fruition, hence the bra was becoming more architectural in design. In the 1950's, the conical bullet bra was still highly popular and still was glamourised by huge hollywood stars such as Marilyn Monroe, Diana Dors andLana Turner. etc. The list goes on. Bras of this kind where advertised frequently in womens fashion and lifestyle magazines. The Bullet bra could also be a fetishized look, as seen worn in black  by the queen of fetish pin up's 'Bettie Page'. The 1950's also saw the bullet bra have spiral top titching and insertable cups for women to go up a cup size if desired. 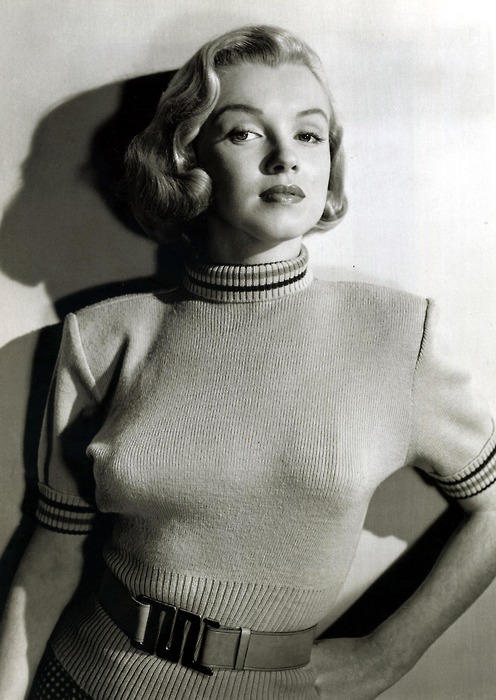 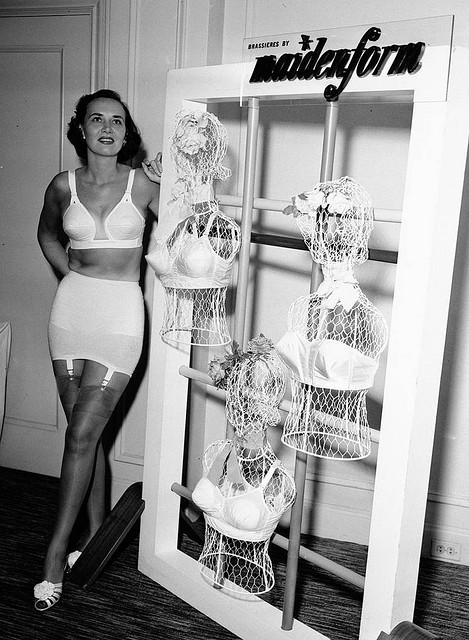 above: publicity shot for lingerie brand and bullet bra designer 'Maiden form' 1950's
The fashion industry of the 1990's saw Madonna wear Jean Paul Gaultiers creation of the cone/bullet bra for her Blonde Ambition tour. Although extremely exagerated where JPG designs, its evident he was inspired bu the vintage classic. Keeping with pretty peach silks and the top stitching. He incooperated the bullet bra into a corset body suit. He approaches this look for almost every collection he creates to this day. A more recent design, is a full body corset dress worn by Dita Von Teese in powder blue silk. 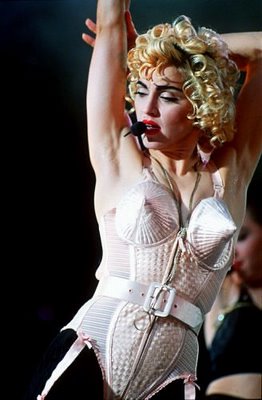 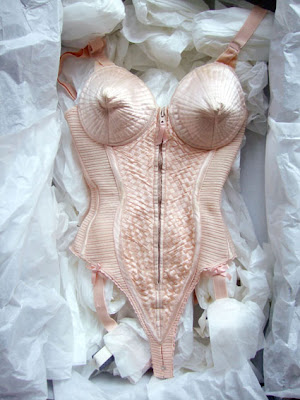 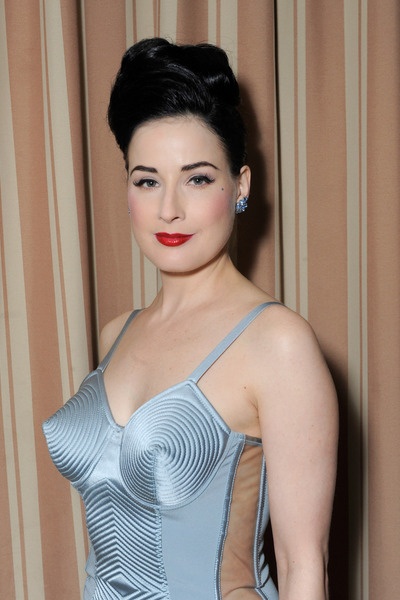 Authentic reproductions where revived by What Katie did, especially the bullet bra starting with their 'Maitresse' bra. Other Vintage influenced brands such as 'Kiss Me Deadly' create pretty vintage looking collections with a modern twist.  Dita Von Teese successful  collection called Von Follies have beautiful examples of top stitching brassiers similar to the torpedo bra whilst of course catering to the modern women.
Over the past years I have noticed a re-birth of Bra's with top stitching details found in Marks and Spencer's with a range of colour pallettes featuring nudes, pinks and creams for their limited edition vintage collections. They seem to re-approach this idea of the vintage revival.  I have also seen the likes of designers Stella McCartney and La Perla create beautiful vintage inspired bras. Brands from the 1930's are still thriving with the likes of Gossard and Triumph. 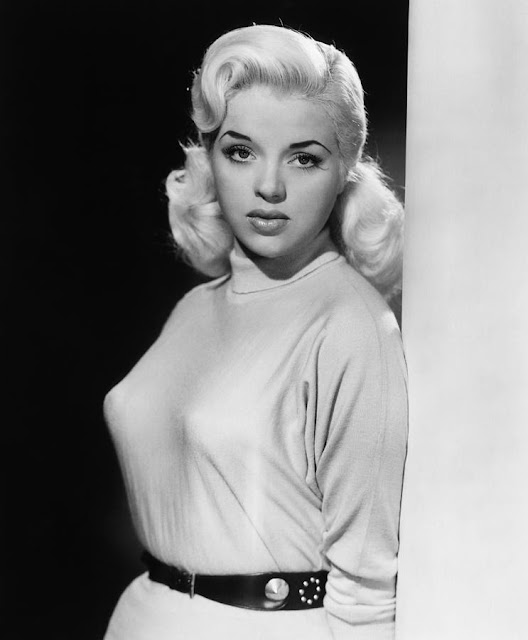 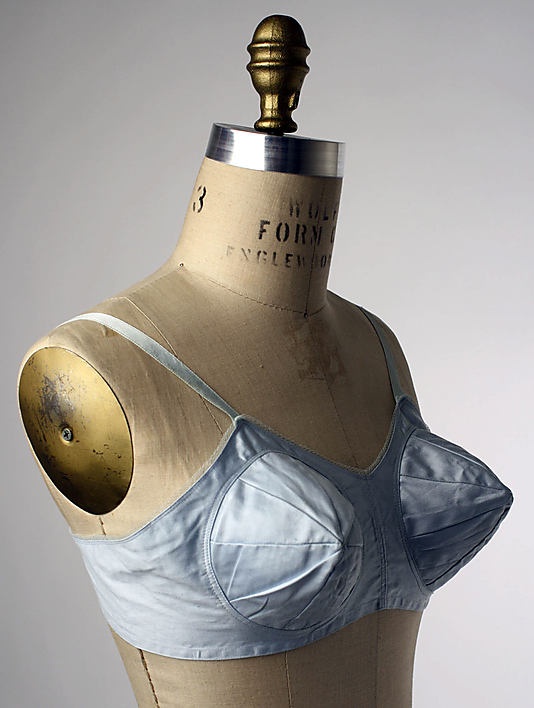 (above) The Met Museum collection 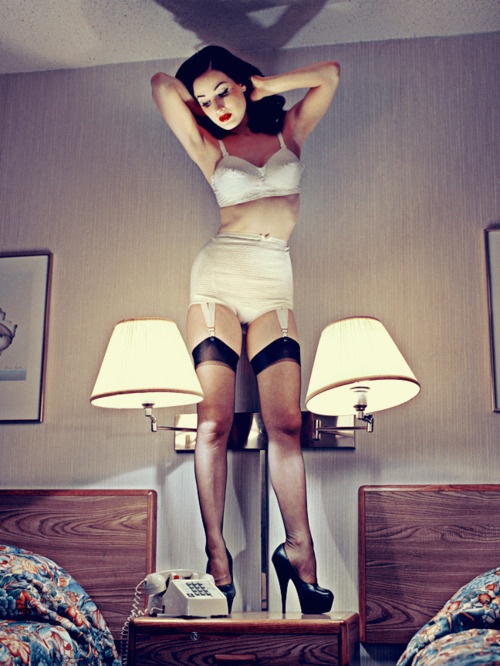 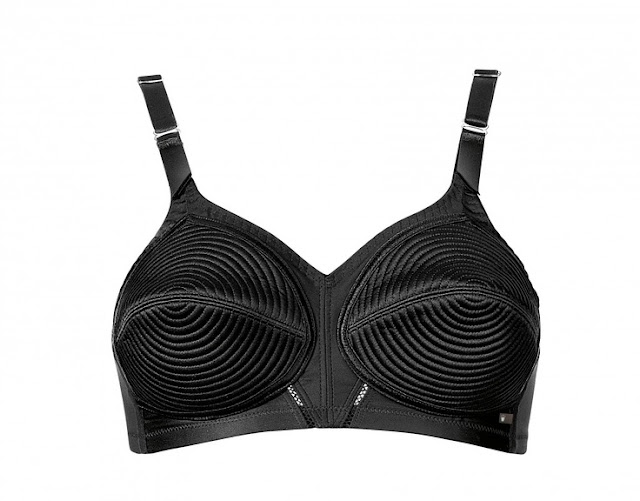 Posted by Lara michelle at 13:28
Email ThisBlogThis!Share to TwitterShare to FacebookShare to Pinterest

PART FOUR: THE SON OF THE revenge of the RETURN OF a selfie modulated by the obtrusive ruses of perception AND THAT THEREFORE can only be considered an ersatz of the ultimate ego trip 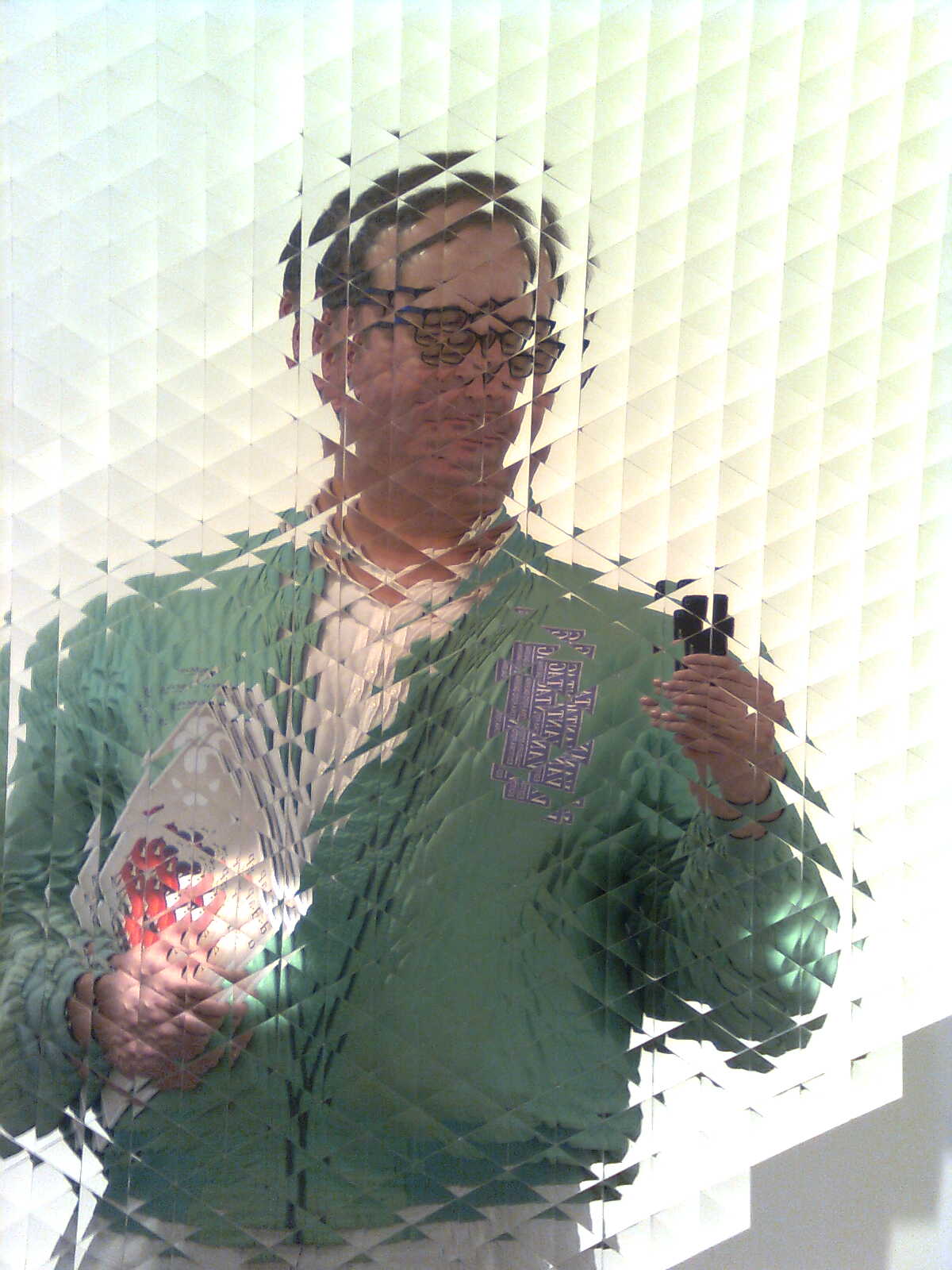 PART Three: THE revenge of the RETURN OF a selfie modulated by the obtrusive ruses of perception AND THAT THEREFORE can only be considered an ersatz of the ultimate ego trip 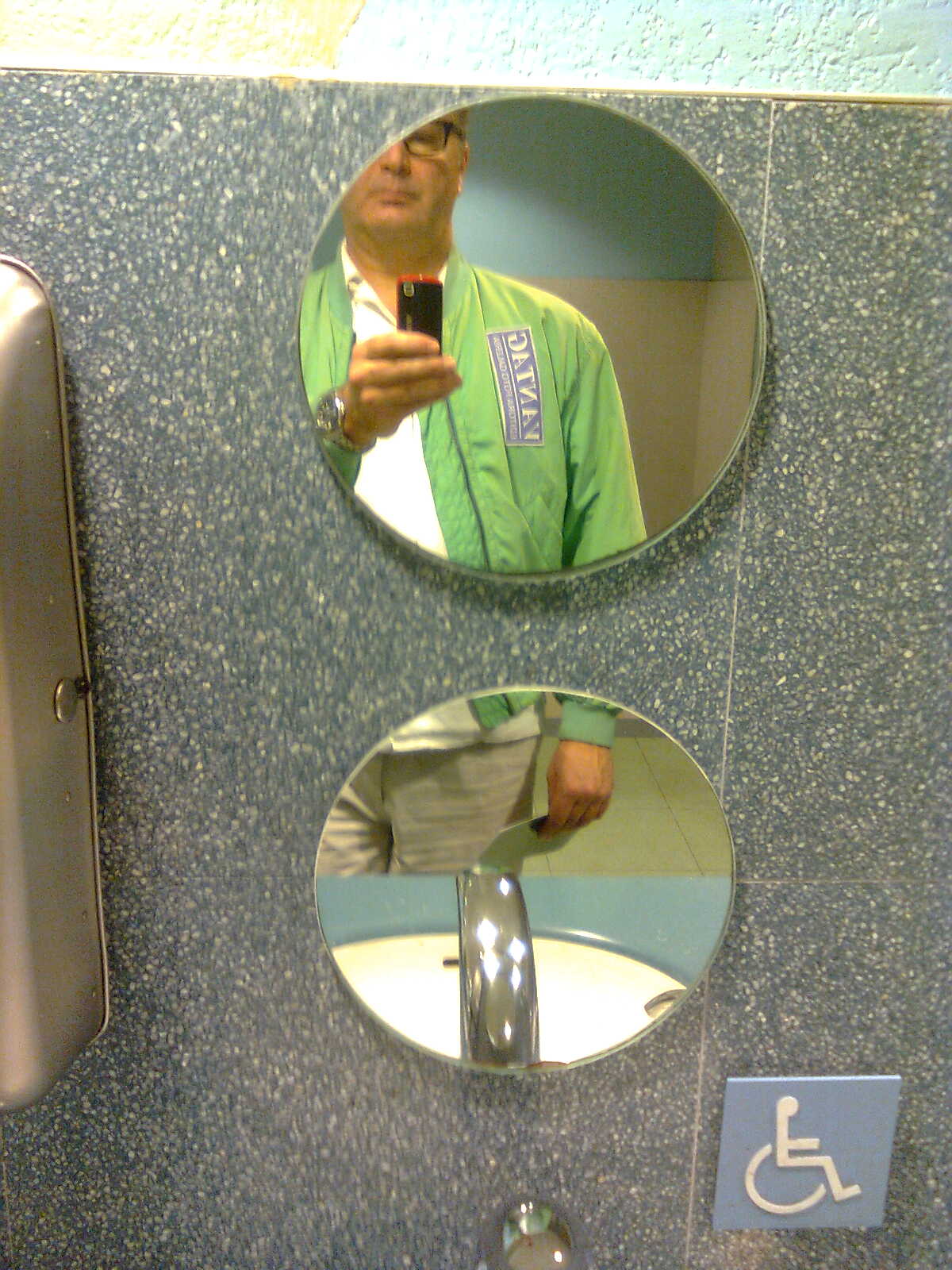