Worst view in the world

42,666
Emma Graham-Harrison in Bethlehem
The Walled Off hotel may sound utilitarian, even bleak. Its owner says it has “the worst view of any hotel in the world”, while its 10 rooms get just 25 minutes of direct sunlight a day.
But, nestled against the controversial barrier wall separating Israel from the Palestinian territories, the West Bank’s answer to the Waldorf offers travellers something more elusive than any luxury destination.
The lodging in Bethlehem is a hotel, museum, protest and gallery all in one, packed with the artworks and angry brilliance of its owner, British street artist Banksy.
From the disconcertingly lavish presidential suite where water splashes from a bullet-strafed watertank into the hot tub, to the bunk-beds in the budget room scavenged from an abandoned army barracks, the hotel is playful and strongly political. 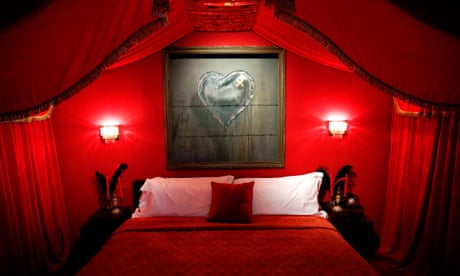 The Walled Off hotel by Banksy – in pictures

View gallery
All the rooms look out on to the concrete slabs of the wall and some have views over it to pill boxes and an Israeli settlement – illegal under international law – on the hillside beyond.
“Walls are hot right now, but I was into them long before [Donald] Trump made it cool,” said Banksy in a statement. The artist, who fiercely guards his anonymity, first came to Bethlehem more than a decade ago, leaving a series of paintings on the barrier that have become a tourist destination in their own right.
Since then, the town’s pilgrim and sightseeing-based economy has been ravaged by ever-tighter Israeli controls on travel between Israel and the Palestinian territories, so the new hotel is expected to provide a welcome boost in jobs and visitor numbers.
Banksy’s reputation is likely to keep all rooms fully booked, but he wants guests to leave with more than just a selfie. “(It’s) a three-storey cure for fanaticism, with limited car parking,” he added in the statement.
Advertisement
The hotel opens to guests on 20 March, with bookings via the website. The team hope Israelis, who rarely see the barrier wall up close or visit Palestinian towns, will be among the guests, even though visiting means breaking the law.
“I would like to invite everyone to come here, invite Israeli civilians to come visit us here,” said manager Wisam Salsaa. “We want them to learn more about us, because when they know us it will break down the stereotypes and things will change.”
Israelis are banned from visiting Bethlehem and its famous sites. And although Banksy has chosen a site officially under Israeli military control – meaning it is legal for Israelis to stay there – all the roads to reach it involve an illegal journey through Palestinian-controlled territory.
The hotel, a former pottery workshop, has a dystopian colonial theme, a nod to Britain’s role in the region’s history, the reception and tea-room a disconcerting take on a gentlemen’s club where a self-playing piano provides an eerie soundtrack.
The fire flickering in the grate glows under a pile of concrete rubble, like a blaze at a bomb site, a classical bust in a niche is wreathed in clouds of gas snaking out of a tear gas canister and, in traditional seascapes, the beaches are littered with life-jackets discarded by refugees.
“It’s exactly 100 years since Britain took control of Palestine and started rearranging the furniture – with chaotic results,” Banksy said. “I don’t know why, but it felt like a good time to reflect on what happens when the United Kingdom makes a huge political decision without fully comprehending the consequences.”
Upstairs, original Banksy artworks decorate several of the rooms. In one, an Israeli soldier and a Palestinian protester thump each other with pillows, the feathers fluttering down towards the real pillows of the bed below.
In another, a pack of cheetahs crouch over a zebra-print sofa, where padded entrails snake out of a cushion. The bookshelves are packed with carefully chosen titles – A Room With a View at the end of one, Cage Me a Peacock on another stack.
The elevator is walled off, too, the doors jammed half open to show concrete breeze blocks, hung with an “out of service” sign.
A small museum explains the wall, the controls on movement and the troubled history of the region, curated together with Essex University professor Gavin Grindon. “If you are not completely baffled, then you don’t understand,” the presenter of a video history signs off.
Advertisement
Also in the building, part of a plan to promote dialogue, is a gallery showing the work of Palestinian artists. It is the first in Bethlehem, says curator Housni Alkateeb Shehada, and a way for artists, who often find it hard to travel, to reach a wider audience.
He wanted to project art on to the barrier wall which lies just five meters away, but decided in the end that it would be too risky, a reminder of the conflict and restrictions that looms over all the people living in Bethlehem. “We are very afraid,” said Shehada. “We don’t know what is going on there with the soldiers and it is forbidden.”
Banksy dismissed worries that security concerns would keep people away, pointing out that he had packed out a “bemusement park” in an unglamorous English seaside town for weeks.
“My accountant was worried some people will be too scared to travel to the West Bank, but then I remind him – for my last show they spent a whole day in Weston-super-Mare.”
Topics
Advertisement

Most popular in US

related stories
Posted by Cabecilha at 3:10:00 PM No comments: