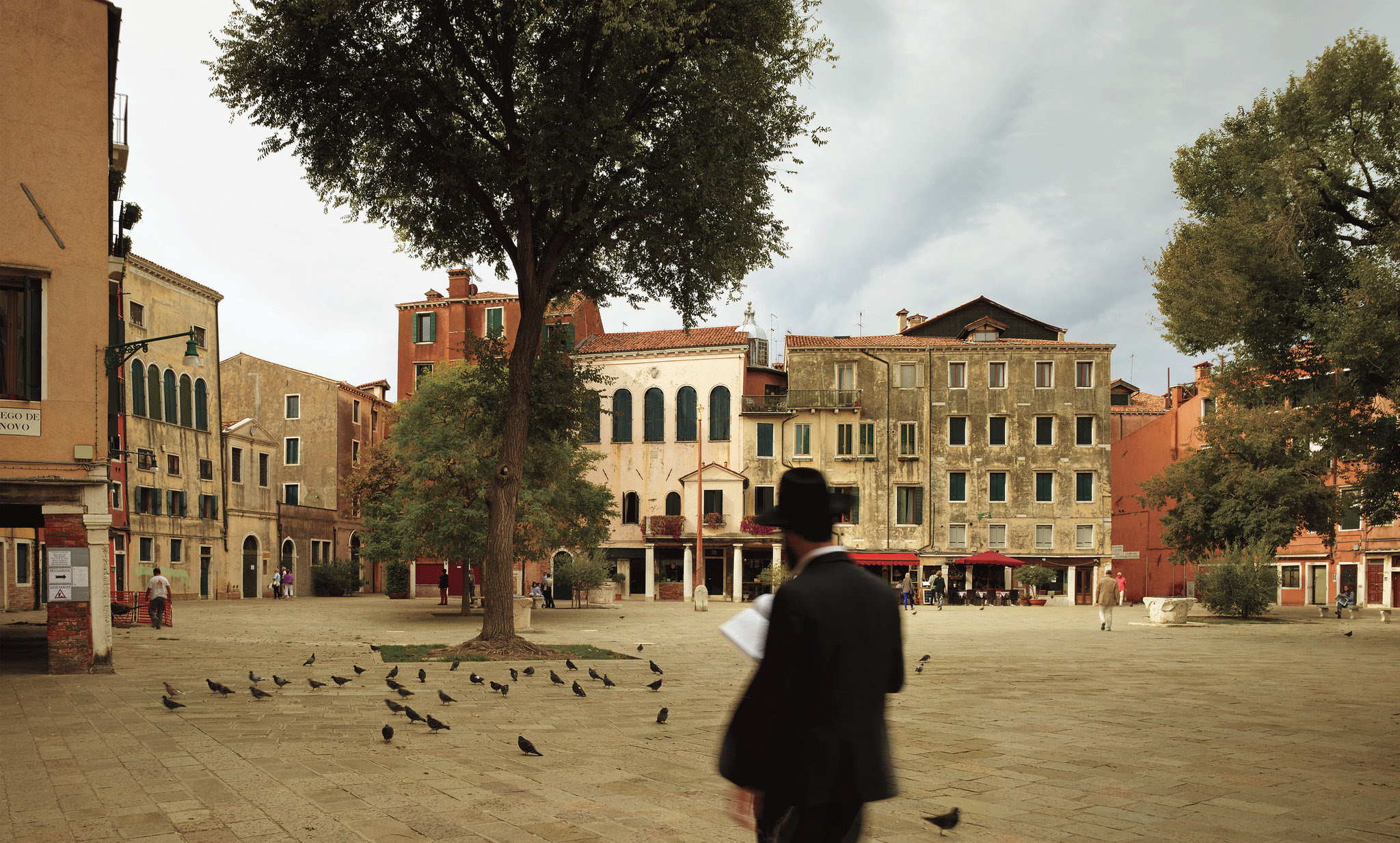 On the Campo del Ghetto Nuovo in Venice’s old Jewish section, a synagogue is hidden inside each of the two arch-windowed apartment buildings. The left building conceals a synagogue for German Jews and the one at center is for Italian Jews. Credit Anthony Cotsifas

You would never know that behind the entirely nondescript facade of the city’s oldJewish quarter are five exquisite synagogues, each with its own particular style.

In the context of Jewish history, the word ‘‘ghetto’’ carries with it an unmistakable fatalism. But long before the Holocaust, the term had a different set of connotations. The Jewish quarters of the great European capitals — Paris’s Marais, Frankfurt’s Judengasse, Amsterdam’s Jodenbuurt — were testaments to the diversity and richness of Jewish life. Often sites of mandated segregation ridden with poverty and plague, they also fostered cultural exchange and intellectual vitality. Nowhere was this more apparent than in Venice, which established one of Europe’s first Jewish ghettos in 1516 in the Cannaregio district, on a small island where the city's cannons had previously been cast: the foundry, or ‘‘geto.’’

Today a quiet, crumbling corner of a sinking city, the Venetian ghetto was once a microcosm of Venice itself, a tapestry woven of many nations, pasts, traditions and languages. Venice was a capital of the Mediterranean world, but it was also a capital of Jewish life in Europe, the epitome of the Diaspora’s potential. The most enduring evidence of the cosmopolitan universe that used to exist here are the five synagogues that today lie hidden behind the nondescript facades of dilapidated apartment buildings where a few families actually still live: small jewel boxes that quietly preserve an enchanting global artistry.

On a Friday afternoon this fall, I walked along the bar-lined main canal that cuts through the now trendy Cannaregio, past tourists eating outside and locals crowded around coffee counters, before turning into a dark alley, the Calle Ghetto Vecchio, next to a small kosher restaurant. On a sleepy square at the passage’s end, the Campo del Ghetto Nuovo, boys were kicking a soccer ball while elderly women perused a storefront display of winter accouterments for pets. The Museo Ebraico, a small, modest museum from the 1950s, organized in a series of strange little rooms, tells the story of the area. It is to be refurbished next year by the Venetian Heritage Council to mark the ghetto’s 500th anniversary, along with the three 16th-century synagogues hidden on the upper floors of the crumbling buildings on the same piazza.
Each synagogue was designed to correspond to a different nation of Jewish immigrants, and part of the pleasure of visiting them is noticing their unique styles. The oldest, the Scuola Grande Tedesca, built in the 1520s for German Jews who imported Ashkenazi traditions to the Mediterranean world, is most ornate, although you’d never know it from the outside. The synagogues were initially tolerated on the condition that their exteriors bear no resemblance to Jewish houses of worship, so the sense of being enveloped in opulence is all the more striking when you enter. The Scuola Canton, built a few years later, possibly for émigrés from southern France, showcases a Torah ark laced with gilded carvings and wood panels illustrating the book of Exodus. The beauty of the Renaissance Scuola Italiana is restrained, by contrast, with natural light streaming in from five large windows, illuminating the ancient mahogany.
Across a small pedestrian bridge are the two Sephardic synagogues, the Scuola Levantina and the Scuola Spagnola. In terms of architectural conventions, these two seem to break all the rules; they were lovingly restored in the 17th century by non-Jewish artisans — perhaps even by Baldassare Longhena, the master of Venetian Baroque. That evening, I returned to the Spanish synagogue for a service packed with locals and visitors. Bathed in the gentle glow of giant Flemish candelabra, the space was resplendent, filled with chanting and with history, in all its darkness and light. A fantasy of black-and-white marble and rich red satin, it is as much a piece of Venetian cultural patrimony as it is a masterpiece of Jewish architecture. For a moment in time, there was little difference.

Joe Jackson, James Joyce, Darth Vader, Lucius Malfoy and Brutus all have one thing in common: They’re “Bad Dads,” according to the French multimedia artist Camille Henrot, whose new show of interactive sculptures and drawings opens at Metro Pictures this week. Henrot’s definition of the term extends beyond the biological to include any authority figure that abuses power — a parent, sure, but also the government, the police or even the Internet. In preparing for her upcoming show, Henrot wondered what strategies people might use to “balance this dependent relationship.” One strategy: to call a hotline.
Inspired in equal parts by emergency phones and toys, Henrot created several bright, playful telephones for her new show, each accompanied by a script co-written by the poet Jacob Bromberg (with whom Henrot worked on her 2013 film, “Grosse Fatigue”). Visitors can pick up plastic receivers and listen to a series of questions that lead to advice for modern conundrums. For those who want to complain about an unsavory stranger or unruly friend, there is the hotline “Enough is Enough” — which also includes the option to complain about the hotline itself. Then there’s the “Bad Dawg/Best Friend Forever Hotline,” which incorporates dogs of both varieties: the canine kind (“Press 2 if he chews up your shoes”) and the bad-boyfriend kind. (“Press 6 if your dog wakes you up during thunderstorms and texts you at all hours of the night, even getting his friends to text you because he is afraid of you cheating.”) The “Bad Dad & Beyond” hotline takes technology woes to a new level: “Does he sacrifice children to Moloch and perform unexpected reboots?” a voice asks. “Has he been infected by a porn virus?” Press 0 for yes and 1 for no.
Henrot’s works combine the lighthearted, twisted and political. In large watercolor drawings that recall the fluid lines of Matisse, familiar images of cute animals and mythological figures take on murky meanings. In the diptych “Bad Dad,” Henrot renders a jovial father pelican eating his scared, fluffy offspring. Another painting, “Trickle-Down Effect,” depicts a row of four wolves joyously copulating all at once. Charming but unsettling, these pastel-colored paintings return to what Henrot calls “the ambivalence of our relationship with the authorities we depend on.”
Posted by Cabecilha at 4:37:00 PM No comments:

How an Architect Designs a Blockbuster Art Show

Opening this week, “Francis Bacon: Late Paintings,” a new exhibition at Gagosian’s Madison Avenue gallery, offers a comprehensive survey of the artist’s lesser-known later work. To create a setting worthy of the enterprise, Gagosian directors Valentina Castellani and Stefan Ratibor sought the expertise of a longtime collaborator: the architect Annabelle Selldorf.
The latest in a trio of shows dedicated to the painter’s legacy, this exhibition centers on the last two decades of Bacon’s life, featuring a collection of more than 25 pieces, including loans from institutions like MoMA and the Tate. Selldorf and the curators were forced to strategically navigate the strict installation stipulations attached to each piece — and still create a dynamic space for viewing. “It’s a great privilege to work with Valentina, because it really is a dialogue,” says Selldorf, who has worked alongside Castellani and the gallery on multiple projects. “My team and I really excel at anticipating the natural circulation of a space, but it’s her intimate knowledge that allows us to capitalize on the more profound relationships between the works.”
Due to the large-scale nature of Bacon’s paintings and the constraints of the Upper East Side gallery, the layout is in part dictated by architecture. When choosing how to hang the works, Selldorf and Castellani abandoned the idea of a strict linear hierarchy. Instead, they used a scale model to decide on placements that would create a thematic rhythm. With the exhibition spread across two floors, maintaining a sense of continuity became key. Selldorf unified the spaces with color — opting for an atmospheric, grayish beige tone rather than the traditional whitewash. “We wanted a very calm background,” Selldorf says. “It is the quality of the work that makes the show exciting, so rather than creating additional noise, we really focused on making spaces that were quiet and measured in such a way that the focus of attention was on the paintings.”
Forecasting a high volume of visitors, Selldorf employed subtle lighting and strategic spacing to optimize the dimensions of each room. “It’s very difficult to deal with crowds in such a confined space,” she says. “Rhythm, circulation, proportion and lighting are elements that factor not only into the art-viewing experience, but also into different modes of living. When all of the pieces are in balance, it’s the best for everyone — and the biggest compliment to my work.”
Posted by Cabecilha at 4:13:00 PM No comments: