Art History’s Iconic Depictions of Dreams, from the Renaissance to Surrealism 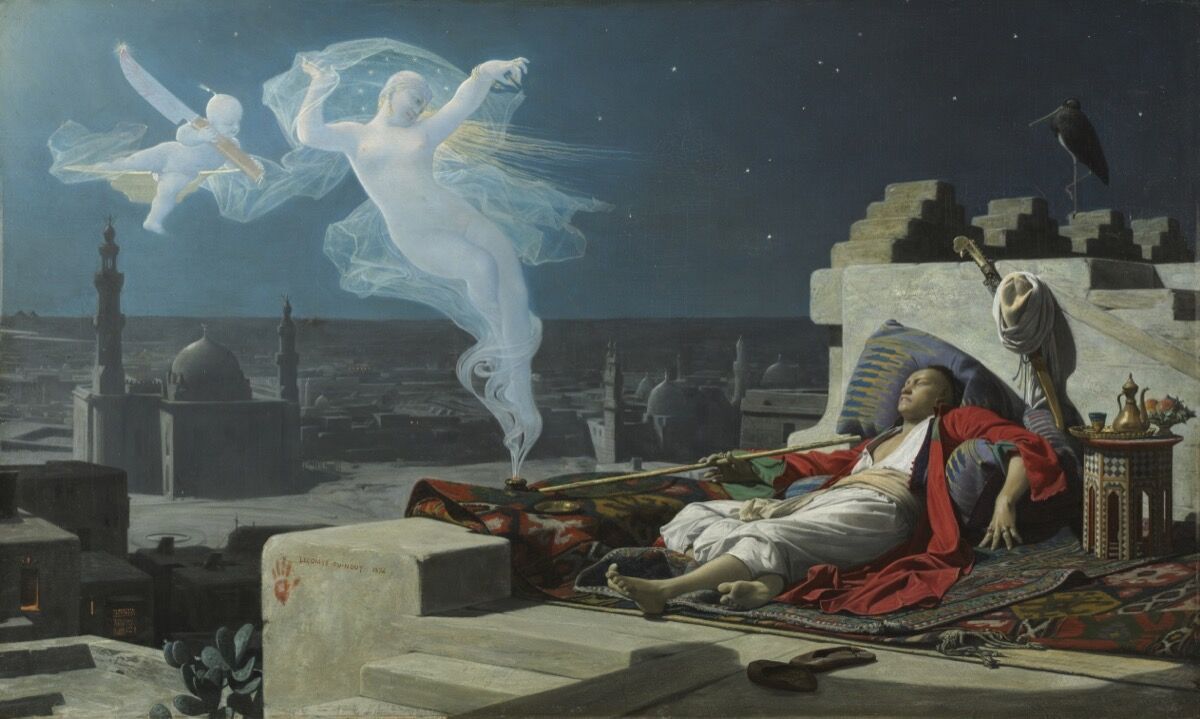 Jean Lecomte du Nouÿ, A Eunuch’s Dream, 1874. Courtesy of the Cleveland Museum of Art.
“When we fall asleep, where do we go?” This was the question looming over the long line of teenage girls who recently waited impatiently outside the Billie Eilish merch pop-up in Chinatown. The pop star didn’t invent this question. Philosophers, poets, and psychoanalysts have rhapsodized about the answer for centuries. It’s visual artists, though, who have, again and again, sought to show the impossible—to imagine, in pictures of sleeping subjects, the unseen places we go when we dream. From Godly visions to fantasies to nightmares, the representations of dreams in art have drastically changed since the Middle Ages. 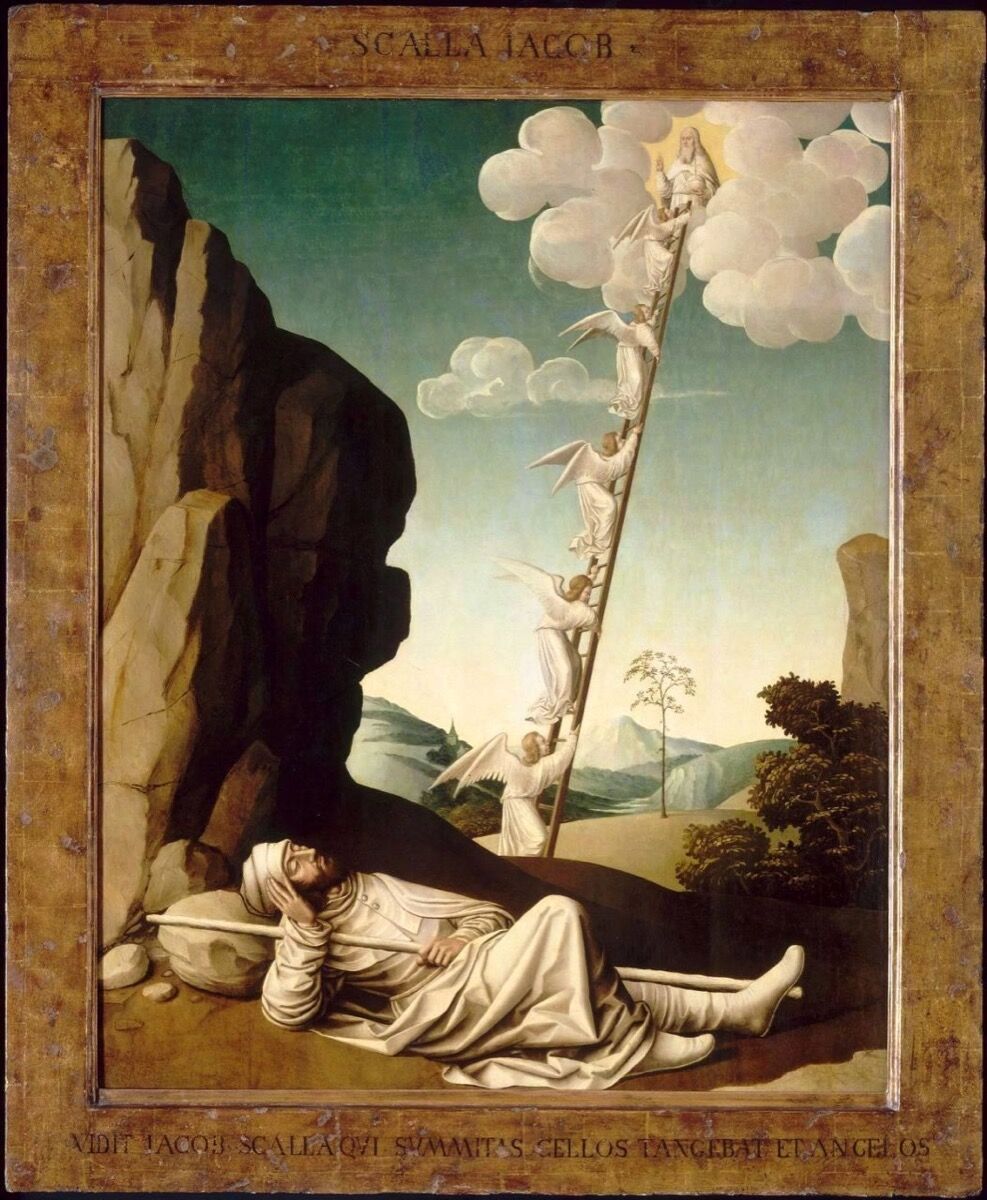 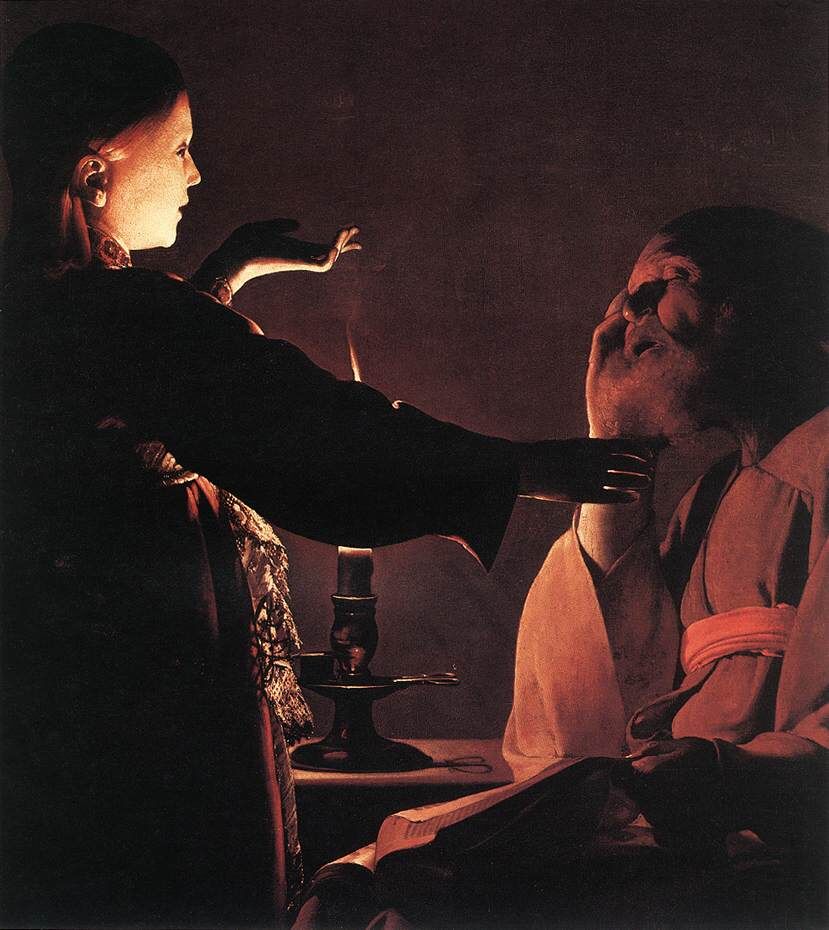 Georges de la Tour, Dream of St. Joseph, ca. 1600. Image via Wikimedia Commons.
In the Renaissance, as artists and Humanists turned to the writings and art of antiquity, they discovered the ancient philosophers like Hippocrates and Aristotle had been tantalized by the subject of dreams. The 15th-century Florentine philosopher Marsilio Ficino, in particular, took up the task of interpreting the meaning of dreams. His concept of vacatio animae posits that while sleeping, the soul can be freed from the corporeal restraints of the body and achieve a higher, spiritual state.
In art, this spiritual state often took the form of a dozing soul caught in a religious moral dilemma. But dreams also allowed
Renaissance
artists to heroize the creative imagination and play with sensual, pagan scenes. The Venetian painter
Lorenzo Lotto
’s Sleeping Apollo and the Muses with Fame(ca. 1549) shows the naked deity napping in an idyllic glade. An angel flying overhead surveys the heaps of discarded clothes and musical instruments, while in the distance, the Muses—reveric stand-ins for the creative imagination—perform an uninhibited dance. 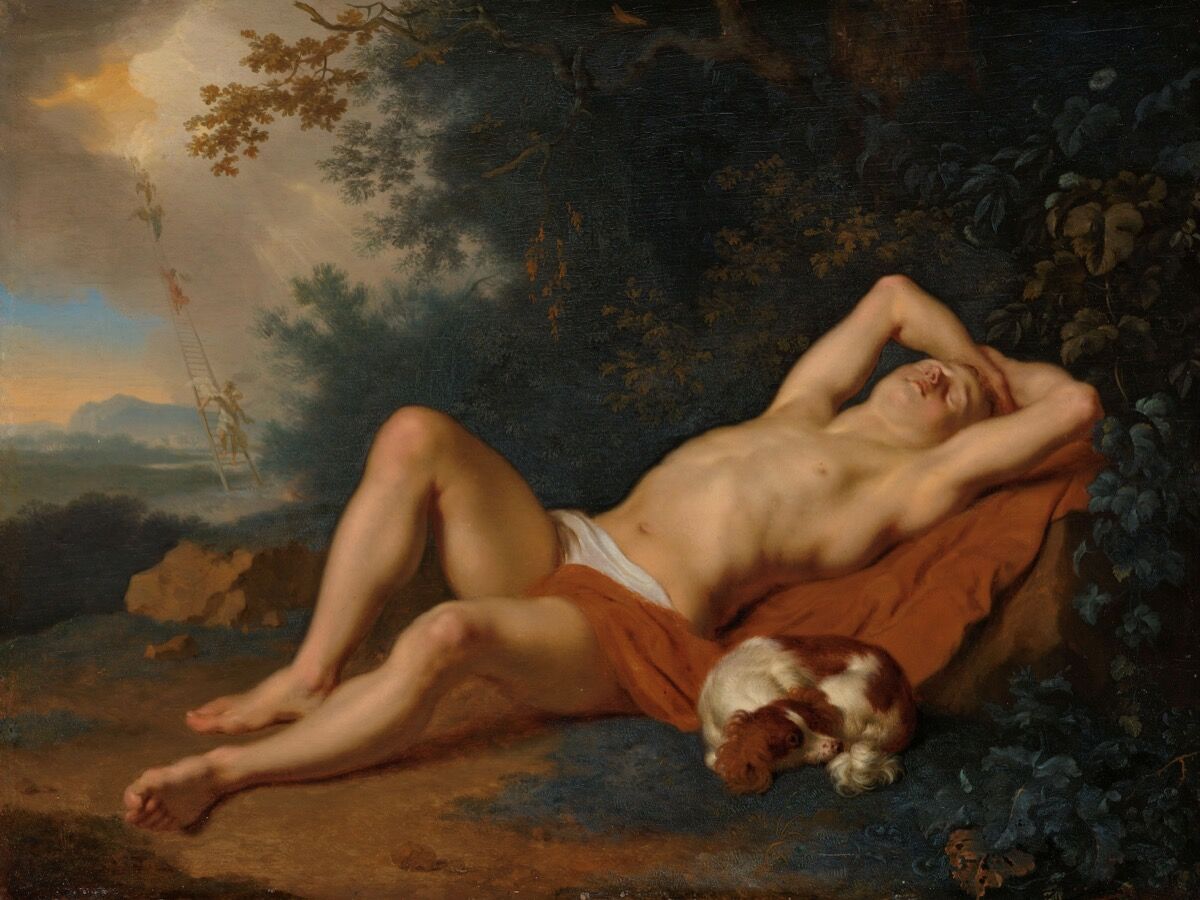 Ary de Vois, Jacob’s Dream, 1660–80. Courtesy of the Rijksmuseum.
Yet it was the Biblical dream—a communication from God—that artists were most often called upon to represent. The Old Testament stories of Jacob’s ladder and Joseph’s interpretation of Pharaoh’s dream were popular subjects. In both narratives, their dreams become important catalysts for change.
The dream of Jacob (ca. 1500), an oil-on-panel work by Nicolas Dipre, foregrounds Jacob, dressed ethereally in white, reclining outdoors with his head resting on a rock. His prophetic dream, in which angels mount a ladder to heaven, appears tangibly in the landscape behind his enclave. Jacob’s eyes may be closed, but his sight, the painting suggests, is clear.
Divine visions remained a popular challenge for centuries of Western artists, who imbued the well-worn stories with ulterior meanings. Ary de Vois’s version of Jacob’s dream (1660–80) is pointedly sensual. Jacob, nude save for a strategically placed bit of cloth, languorously stretches out on a patch of grass, his idealized body on full display. The ladder and angels appear far in the background, a decidedly less prominent focus of the picture compared with Dipre’s work. Here, Jacob’s vision from God is nearly ecstatic, offering pleasure to the sleeping figure much like Bernini’s famously erotic St. Teresa in Ecstasy (1647–52). 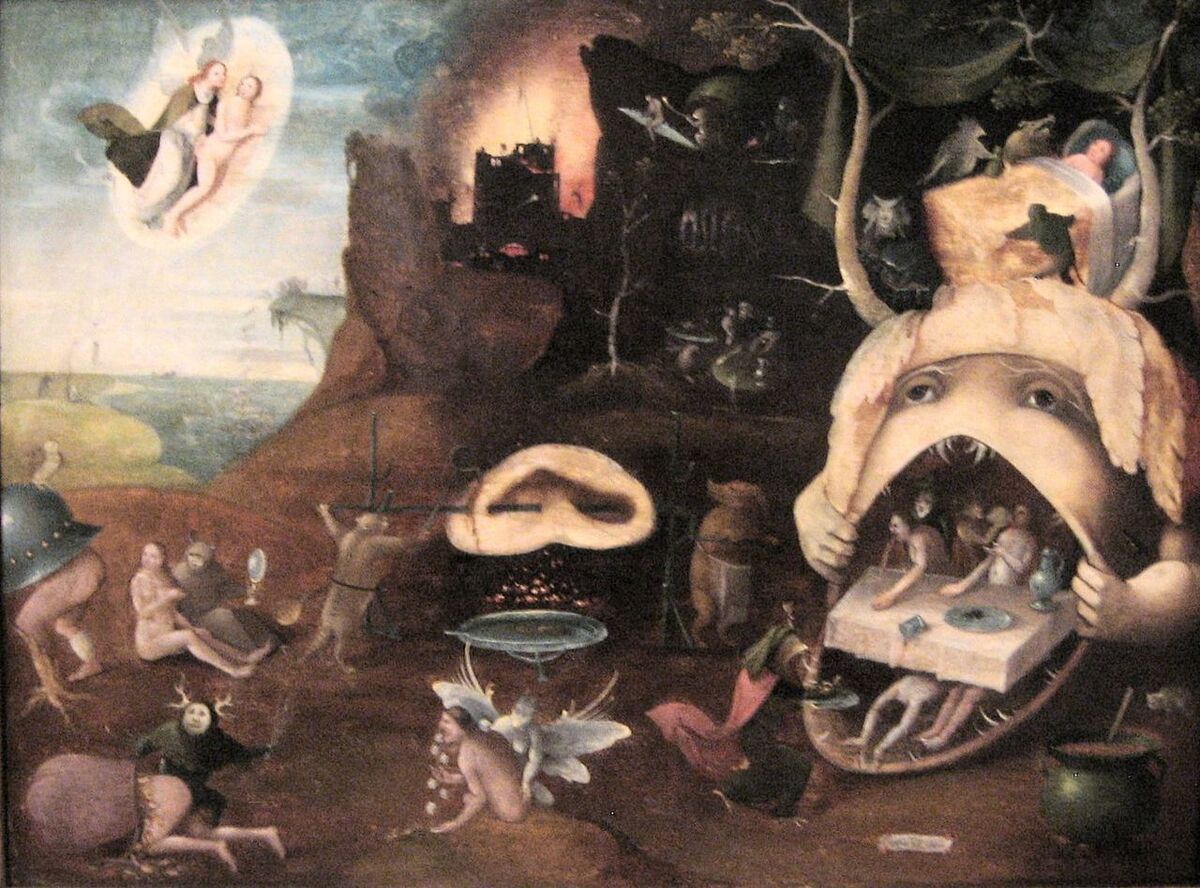 Followers of Hieronymous Bosch, The Vision of Tundale, ca. 1520–30. Image via Wikimedia Commons.
The stuff of nightmares was of little interest to the Italian or French Renaissance artists, who favored neo-Platonic ideals of beauty—until they encountered the disturbing fantasies of northern painters like
Hieronymus Bosch
. The Vision of Tundale (ca. 1520–30), attributed to Bosch’s followers, is a typically hallucinatory, “Boschian” scene. Inspired by the medieval poem “The Vision of Knight Tondal,” in which an errant knight dreams of his moral redemption after a vision of Hell, the painting depicts a spectacular and grotesque hellscape populated by monstrous creatures and graphic details. The work also takes on the idea of the nightmare as a phenomenon that is visited upon the living as a warning to repent for.Indeed, in the lower left-hand corner, the sleeping sinner Tondal is seen experiencing the nightmare firsthand. 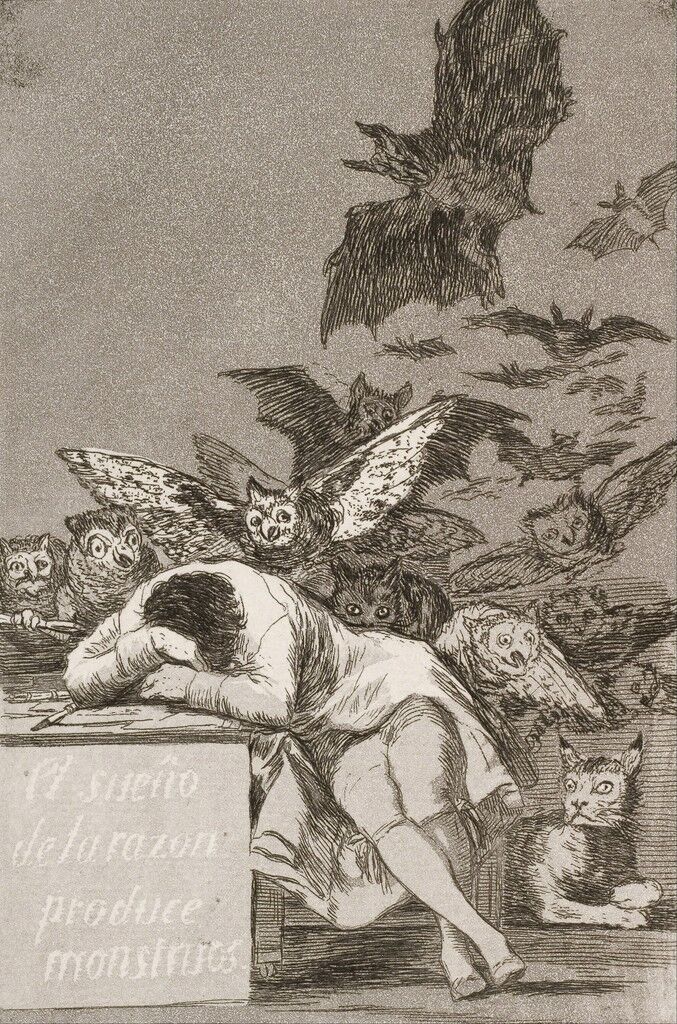 Francisco de Goya
The Sleep of Reason Produces Monsters, No. 43 from Los Caprichos (The Caprices), 1796-1798
Nelson-Atkins Museum of Art, Kansas City, Missouri
Although the strictures of morality remain intact in The Vision of Tondal, when we slumber, the picture seems to suggest, reason sleeps too. Enlightenment-era artists made political statements about the irrationality exemplified by the nightmare.
Francisco de Goya
’s The Sleep of Reason Produces Monsters (1799) from his biting “Los Caprichos” series, employs the bad dream to criticize contemporary Spanish society, particularly pre-Enlightenment practices and superstitions the artist felt held the country back from modernizing. The central figure’s apparently peaceful sleep is interrupted, for the viewer at least, by the predatory creatures—associated, in Spanish folklore, with evil—that besiege him. Without the Enlightenment value of Reason, Goya forcefully asserts, evil wins. 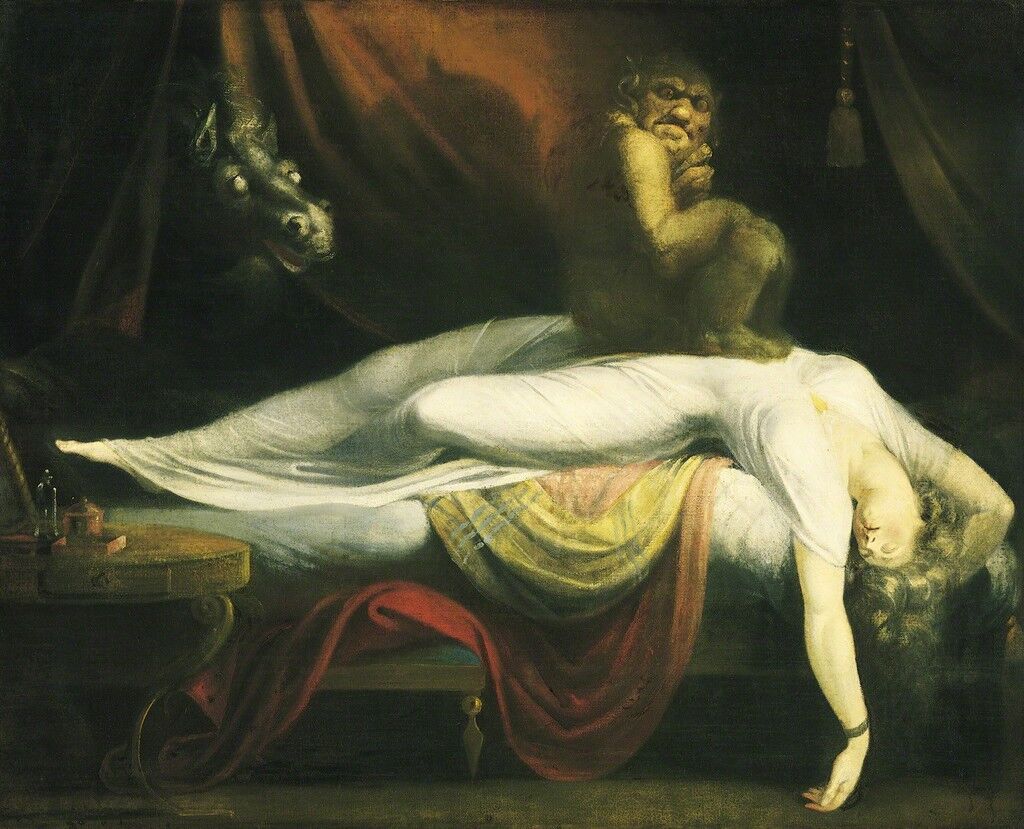 Henry Fuseli
The Nightmare, 1781
The Detroit Institute of Arts, Detroit
Henry Fuseli
’s famous Nightmare (1781) from around the same time would seem to suggest a similar narrative but is unusual in that it lacks a moral component, or even a literary, biblical, or art-historical precedent. The invented scene shows a woman in white stretched across her bed. A frightening incubus figure crouches on her chest while a horse with flared nostrils pokes its dark head out from behind a curtain. The work’s mysterious intentions and frightening imagery shocked audiences when it debuted, and seems to fall less in line with the “Age of Reason” than the ideals of
Romanticism
, in which European art and literature began to place value not on moral logic but emotion and spirituality. Some scholars today see the work as a prefiguration of Sigmund Freud’s psychoanalytic theories; Freud reportedly had a reproduction of the painting in his Vienna apartment. 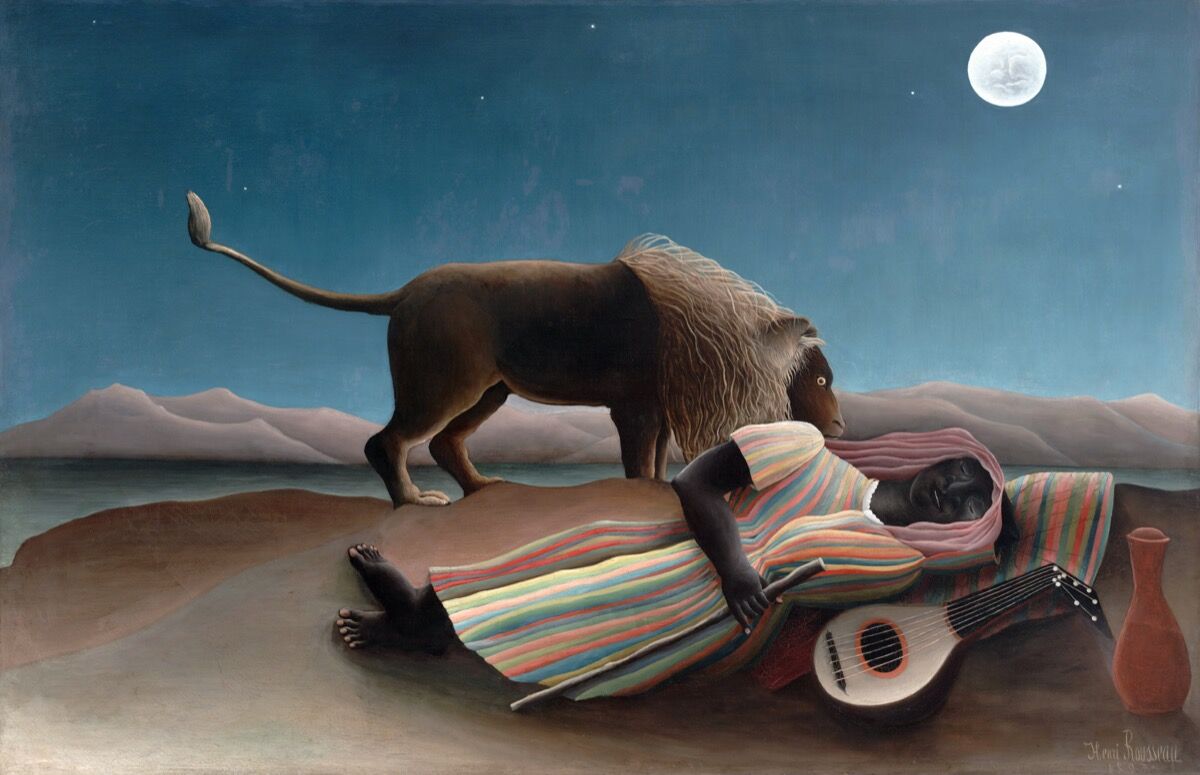 Henri Rousseau, The Sleeping Gypsy, 1897. Photo by VCG Wilson/Corbis via Getty Images
Before Freud, however, in the 19th century, artists involved with the
Symbolist
movement developed novel means to express subjective psychological and spiritual realities through the landscape of dreams. Their subject matter features heady mixes of fantasy, eroticism, the occult, and death, often to puzzling effect. What is the meaning behind
Henri Rousseau’
s The Sleeping Gypsy (1897)? Is the lion that licks the sleeping woman’s face a product of her dream or a terror of reality? Is the woman really sleeping in the desert at all, or is the whole picture a dream?
When Freud did publish his theories on dreams and the unconscious, the effect on art was immediate. In the 20th century, dreams became primary source material for the
Surrealists
, who sought to transcend the constraints of rationality—and the oppressive societal rules that had led mankind to the First World War. The unconscious became a creative tool that contained unexpected meanings and a window onto one’s secret, inner self. 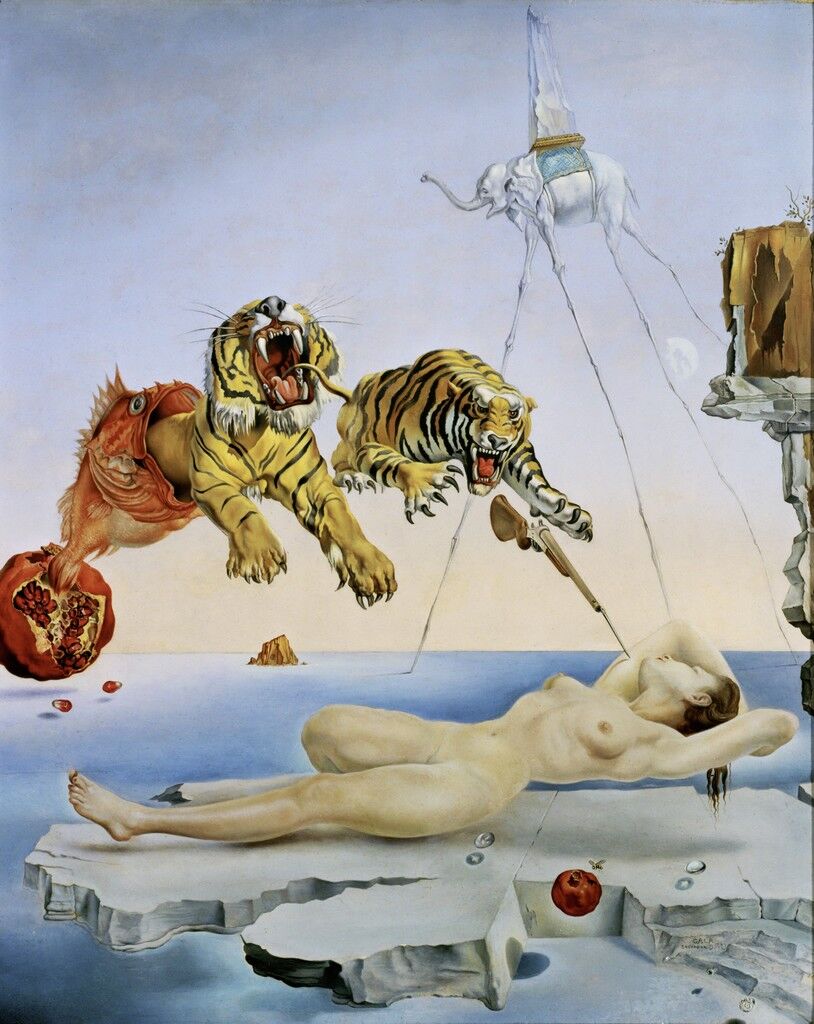 When we fall asleep, where do we go? Dalí, the Surrealists, and their artistic forebears understood the interpretive possibility of dreams as avenues for self-exploration. More importantly, they took full advantage of that question, relishing the creative freedom of the imaginative dreamscape.
Julia Wolkoff is an Editor at Artsy.
Posted by Cabecilha at 8:30:00 PM No comments: