In Defense of the Ancient Comedian Who Went After Aristotle 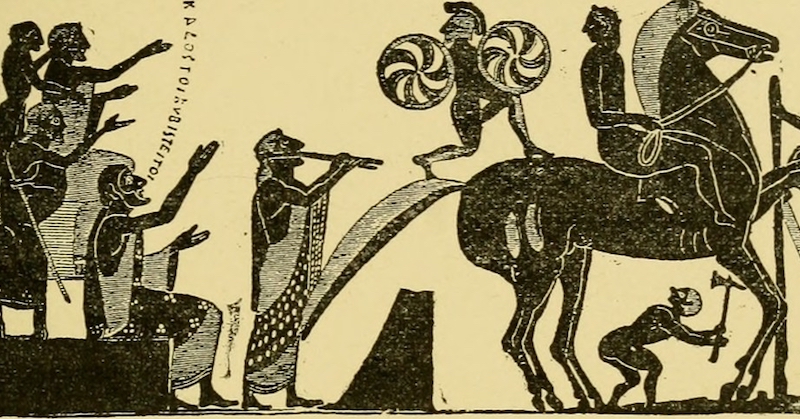 On the Lost “Lenny Bruce of Athens”

There is a little hole-in-the-wall place in Athens called Cinque Wine and Deli Bar. My wife and I found it by accident while roaming the hip and hustling Psiri neighborhood—a few blocks from Monastiraki Square, the heart of the tourist area near the Acropolis. We were looking for a quiet place to have a glass of wine, which can sometimes be more difficult than you’d think in an area obsessed with selling Souvlaki to tourists.

During the day Psiri is a mix of light industry and junk shops that remind me of Canal Street in New York City during the 80s. Vendors stack dusty books, battered electrical parts, used hardware, clothing, tchotchkes, old cook pots, power tools, burner phones—basically anything and everything you don’t really want or need, on the sidewalk and spilling out into streets. It is difficult to navigate during the day and, unless you’re looking for a pair of Soviet-era jumper cables or an outdated math textbook in German, is an area I avoid. However, at night it transforms; the junk is cleared away, and hip restaurants and bars spring to life. It’s just as chaotic, but a completely different vibe.

Cinque is tucked away from the main bustle on a little side street. It’s a quiet and friendly bar that serves only Greek wines by small vintners, plates of local cheese, and homemade chutneys. In other words: it is my kind of place. The owners, Grigorios and Evangelie, are fanatical about Greek wine and gave me a splash-by-splash tour of the oenological output of the entire country. Grigorios—or Greg—is an exuberant man who likes to tell stories. His English is limited—but much better than my nonexistent Greek—so that Evangelie is pulled into the conversations to act as his good-natured but slightly put-upon translator and the straight (wo)man to his jokes. They are excellent company and have a nose for delicious wines.

Much like Alcibiades at the symposium, I got plastered.

Wine has a way of forging friendships and on subsequent visits, after a glass or two, I began telling them about my interest in Ariphrades.

It turned out that Evangelie has a sister who studies ancient Greek. She called her sister and, after a few minutes, came back with a translation of the name.

According to Evangelie’s sister, the name signifies someone who is rude or, perhaps, someone who uses their tongue in a crude way. Did it mean he was salty? The Lenny Bruce of the Agora? Or was it the other way he used his tongue? I wasn’t quite convinced. It seemed too on the nose. You know? Like his reputation was coloring how people translated his name. But besides that, what parent names their kid Crude Talker? It just didn’t seem like something Automenes would do. So I checked the Eulexis-Web lemmatiser for ancient Greek texts and “ari” turns up as a prefix, “an inseparable particle, marking an idea of strength, of superiority.”

Google Translate turns Ariphrades into “Mars Phrases” which sounds like a great name for a new age cat psychologist. I found the contradictions funny, and, like a lot of things about ancient Athens, the more you investigate, the less you know.

I asked Mary Norris, author of the excellent travelogue/language acquisition memoir Greek to Me if she had an idea what his name might mean. She told me that aristo means “best” as in aristocracy and hazarded a guess that “Aristophanes means something like ‘he appears the best.’” She added, “I am not sure if ‘ari’ means ‘superior’ without the ‘sto.’ Anyway, etymology of names is dangerous territory.” Personally, I like a frisson of danger when I’m trying to do research.

If you’ve read her charming memoir of being a copyeditor, Between You & Me: Confessions of a Comma Queen, you’ll know that she likes precision. She asked James Romm, the James H. Ottaway Jr. Professor of Classics at Bard College, and author of several books on the ancient world, what he made of Ariphrades’s name.

James replied immediately: “As to Ariphrades: The meaning is ‘very wise,’ to go by the lexicon. You’re right that ari- is connected to aristos but does not convey ‘best’ so much as ‘very.’ The adjective phradês simply means ‘wise.’”

Apart from the harangues in Aristophanes plays, the most telling reference of Ariphrades is in Aristotle’s Poetics, a collection of essays on literary theory that might be the first known Writing for Dummies. Circa 335 BCE Aristotle wrote, “Again, Ariphrades satirized the tragedians for using phrases which no one would ever speak in ordinary discourse.”

There’s a break in the translation noted by the symbol: [. . .] which signals an omission of some quotations “whose relative points cannot be successfully rendered into English.” Aristotle continues: “But he failed to realize that it is just because of their absence from ordinary language that all such things produce a heightened effect in poetic diction.”

I like a frisson of danger when I’m trying to do research.

The Loeb Classical Library, a multi-volume series of works written in ancient Greek and Latin, takes a crack at a translation of the same brief mention: “Ariphrades would make fun of the tragic poets because they employed the sort of language that no one would ever use in conversation, such as ‘the halls from out’ (instead of ‘from the halls’) and ‘of thee’ and ‘and I him’ and ‘Achilles concerning’ (instead of ‘concerning Achilles’) and other such expressions. Because they are not present in ordinary conversation, these sorts of things produce an unusual effect in speech, but Ariphrades did not realize this.”

I don’t think Aristotle got the joke. Or, if he did, it hit a little too close to home. Because there is a long history in the comedic arts, and theater in particular, of mocking elites: the know-it-alls, the chewers of scenery, the orators who are egregiously sesquipedalian. That’s how comedy works. We like to see people who think highly of themselves fall into a pile of shit. It’s the other shoe dropping, the pratfall, the comeuppance that makes us laugh. Is there anything funnier than deflating a pretentious blowhard?

Perhaps Ariphrades was making a barbed political point, extending his middle finger to poetic pretentiousness and high-born aristocratic ways, revealing the renown poets of the day to be part of a self-aggrandizing echo chamber of ego-inflation, logrolling, and back patting. Kind of like what Marcel Duchamp had in mind when he signed a urinal “R. Mutt” and put it in an art museum.

It is undeniable that Aristotle’s Poetics is a formidable piece of writing, he’s one of the first philosophers to look at how narrative structure works and to unpack the emotional ways that stories—especially the catharsis of tragedy—affect us. Although it doesn’t appear he had much of a sense of humor. He believes that tragedy is the superior art, as it deals with issues of life, death, honor, and virtue in a serious way; where comedy is an inferior form concerning itself with the less virtuous, the scofflaws and scoundrels, the con artists and cowards, and focuses on human weaknesses. This kind of drama versus comedy snobbery is nothing new. For reasons that are unclear to me, comedy has always been treated as the slightly troublesome younger sibling. Just look at the films honored at the award ceremonies or the books that win the Pulitzer Prize. It is rare to find an out-and-out comedy in the pantheon of western civilization. It may be self-serving of me to say so, but I think we ignore comedy at our peril. People who say laughs are cheap have never tried writing comedy, they have never paid full price.

Poetics was written almost 90 years after the golden age of Old Comedy, the playwrights like Ariphrades and Aristophanes who once enthralled Athens had died before Aristotle was born. What that means is that the comic plays of Ariphrades had either survived on papyrus or were still being performed almost one hundred years after they were written. Ariphrades must have been famous, or infamous, enough that an important scholar like Aristotle would include him in his Poetics along with other, well known writers from the same period like Euripides, Aeschylus, and Cleophon.

In The Swerve: How the World Became Modern, author Stephen Greenblatt explores the history behind Roman poet Lucretius’s On the Nature of Things—an interpretation of the writings of Epicurus that promotes reason, science, and the pursuit of pleasure over obedience to any deity. Greenblatt finds enough evidence to allow him to speculate that the early Catholic Church had reason to suppress Lucretius’s document and that its eventual discovery in the 15th century inspired the Renaissance. Greenblatt won a National Book award and a Pulitzer Prize for his work, but contemporary Christian scholars dumped all over it, giving The Swerve scathing reviews, which, to my mind, kinda proved his point.

There is a connection between Ariphrades, Epicurus, and Lucretius. They all promoted—or were accused of promoting—a kind of egalitarian pleasure seeking which would fly in the face of the strict rules of organized religion and an entrenched patriarchy. But maybe it goes deeper. It wasn’t just Ariphrades whose work disappeared. With the exception of Aristophanes, the other great comic writers of the golden era of Old Comedy are also gone: Cratinus, Eupolis, Crates, Aristomenes, Philonides, the list goes on. These were comedies that, from what we can tell by the fragments, were sexually risqué and politically outspoken. Was there some kind of organized destruction of the old comedies? Some humorless Mage in a castle who demanded comedy vanquished from history? Maybe Aristophanes is the sole survivor simply because someone took it upon themselves to preserve his plays. 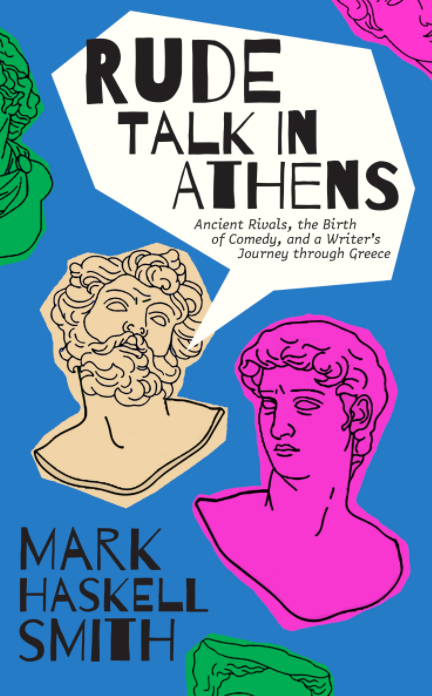 Mark Haskell Smith is the author of six novels with one-word titles including Moist, Salty, and Blown; as well as the non-fiction books Heart of Dankness: Underground Botanists, Outlaw Farmers, and the Race for the Cannabis Cup and Naked at Lunch: A Reluctant Nudist’s Adventures in the Clothing-Optional World. His work has appeared in the Los Angeles Times, the Los Angeles Review of Books, Salon, Vulture, Alta, and Literary Hub. He is an associate professor in the MFA program for Writing and Writing for the Performing Arts at the University of California Riverside, Palm Desert Graduate Center.
Posted by Cabecilha at 3:15:00 PM No comments: