'What attracts me are sensual curves': Superstar architect Oscar Niemeyer whose work was inspired by the female form dies at the age of 104

Architect Oscar Niemeyer who recreated Brazil's sensuous curves in reinforced concrete and built the capital of Brasilia on the empty central plains as a symbol of the nation's future has died at the age of 104.

Elisa Barboux, a spokeswoman for the Hospital Samaritano in Rio de Janeiro, said Niemeyer died from a respiratory infection.

He had been in hospital for several weeks and also on separate occasions earlier this year suffering from kidney problems, pneumonia and dehydration.

Scroll down for video 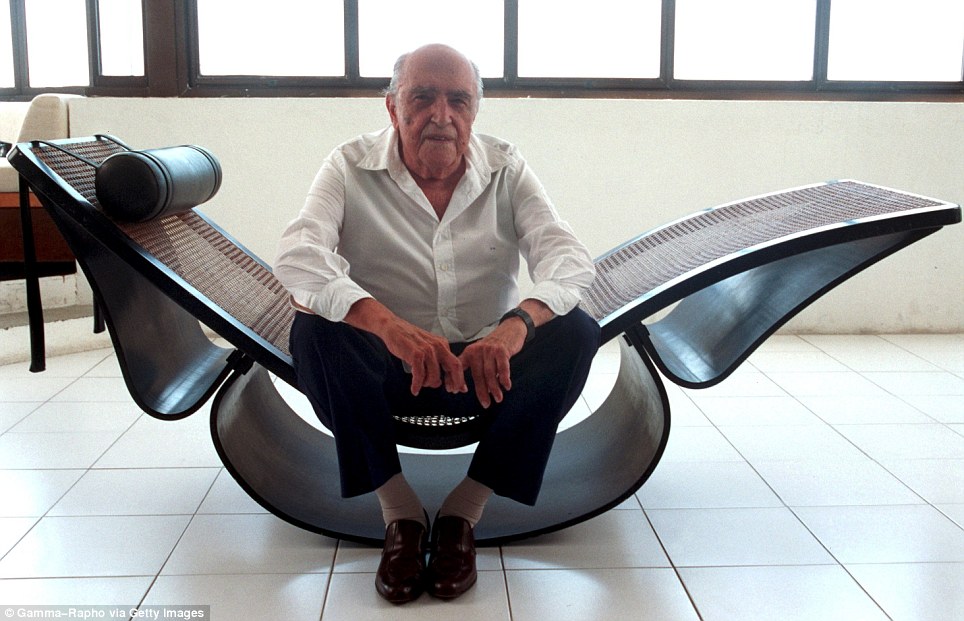 'His body suffered, but his mind was lucid': Brazilian Architect Oscar Niemeyer, pictured ten years ago in his Copacabana studio, has died from a respiratory infection at the age of 104 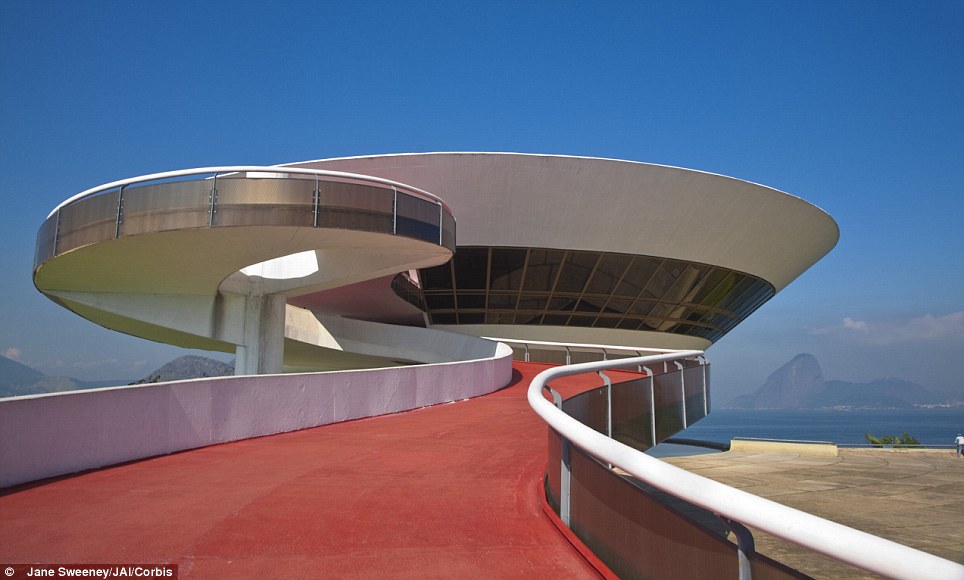 'Sensual curves': Niemeyer's hallmarks include the Museum of Modern Art in Niteroi (above) in the state of Rio de Janeiro 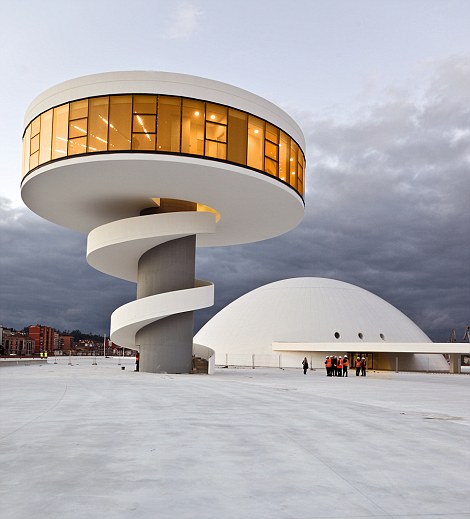 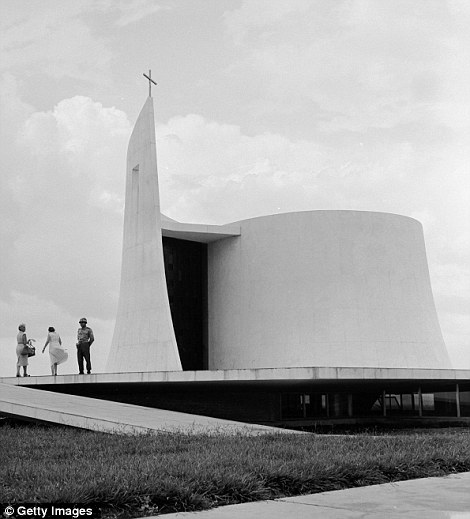 'What attracts me are free and sensual curves': Niemeyer's distinctive style is clear to see in the International Cultural Centre (left) in Aviles, Spain, and a church in the grounds of the presidential palace in Brasilia (right) 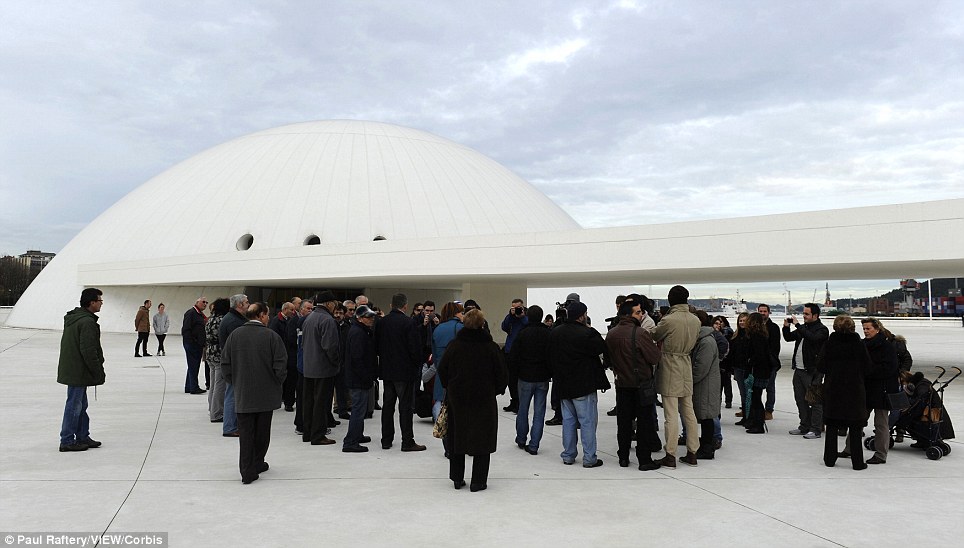 Dr Fernando Gjorup, Niemeyer's physician, said the architect worked on pending projects in the days before his death, taking visits from engineers and other professionals.

'The most impressive thing is that his body suffered, but his mind was lucid,' Dr Gjorup said. 'He didn't talk about death, never talked about death. He talked about life.'

In works from Brasilia's crown-shaped cathedral to the undulating French Communist Party building in Paris, Niemeyer shunned the steel-box structures of many modernist architects, finding inspiration in nature's crescents and spirals.

His hallmarks include much of the United Nations complex in New York and the Museum of Modern Art in Niteroi, which is perched like a flying saucer across Guanabara Bay from Rio de Janeiro.

'Right angles don't attract me. Nor straight, hard and inflexible lines created by man,' he wrote in his 1998 memoir The Curves Of Time. 'What attracts me are free and sensual curves. The curves we find in mountains, in the waves of the sea, in the body of the woman we love.' 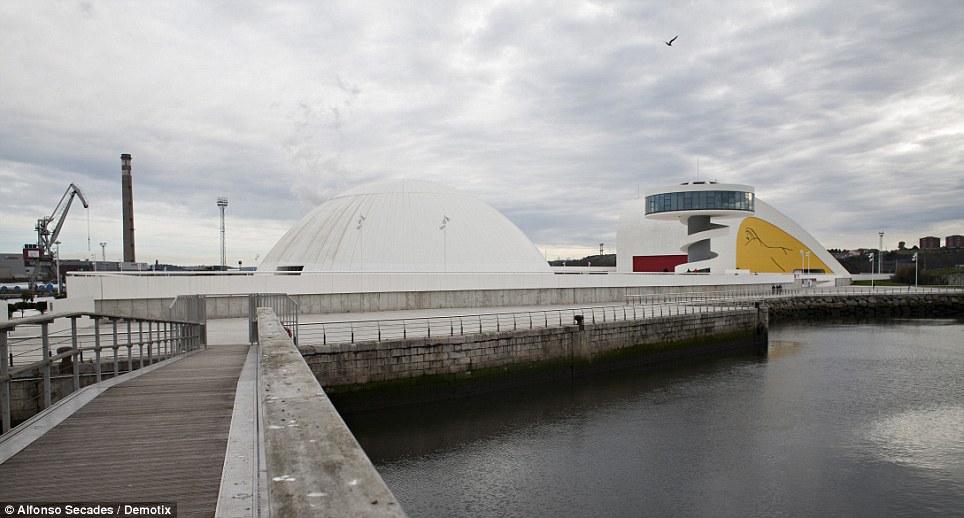 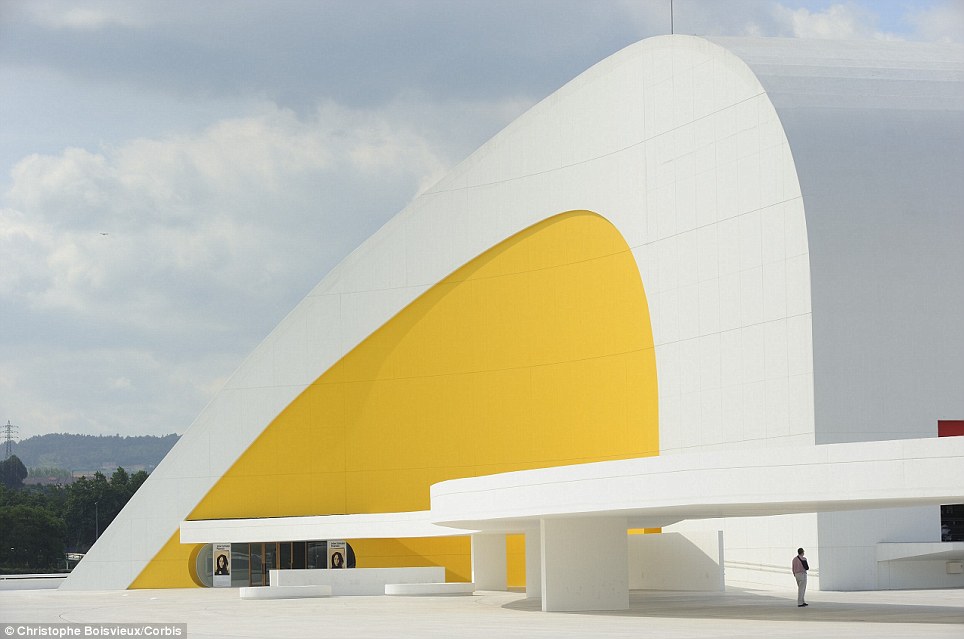 Positive to the end: Niemeyer had been in hospital for several weeks and also on separate occasions earlier this year suffering from kidney problems, pneumonia and dehydration 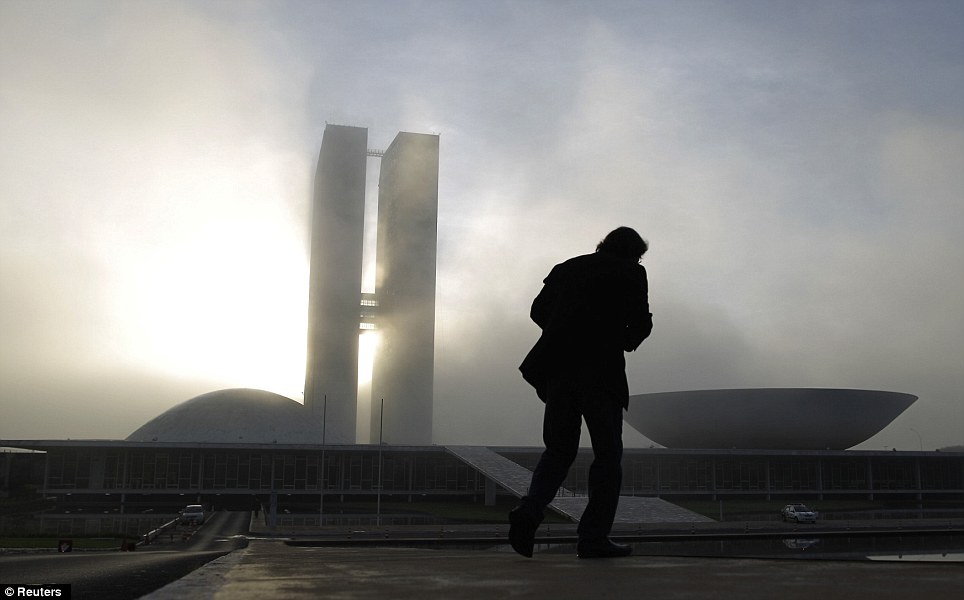 'A work of art should cause the emotion of newness': A man walks past the National Congress building, designed by Brazilian architect Oscar Niemeyer, in the Ministries Esplanade in Brasilia 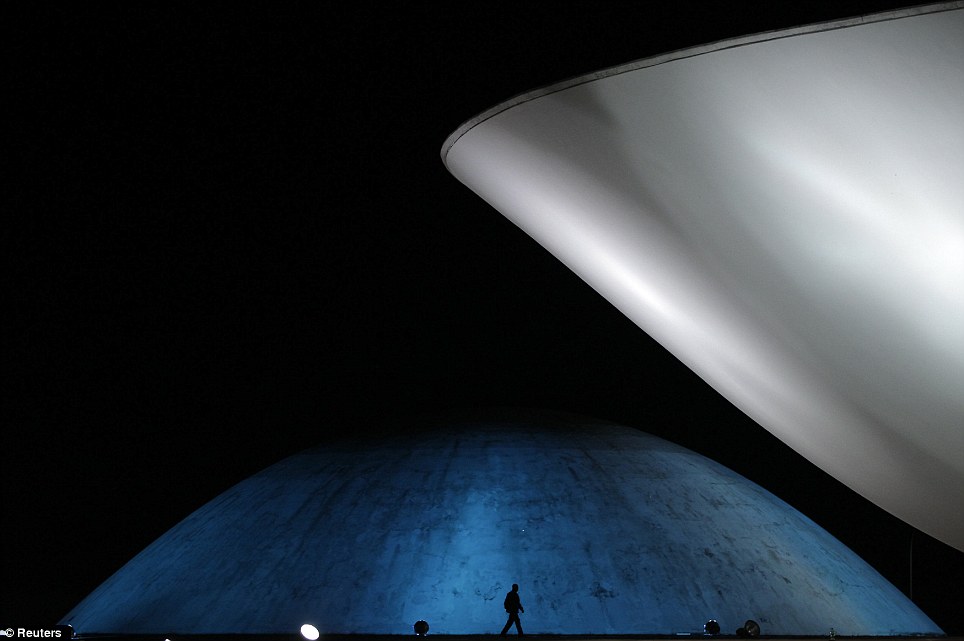 Evocative: A man walks near the National Congress building, designed by Brazilian architect Oscar Niemeyer, in the Ministries Esplanade in Brasilia 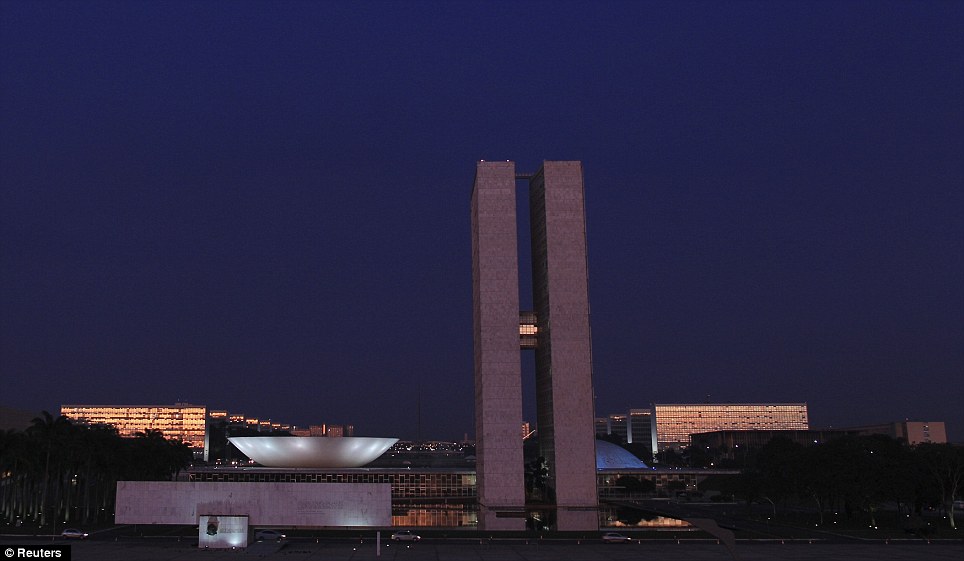 Shaping the world around him: A general view of the National Congress building in the Ministries Esplanade in Brasilia, a city Niemeyer built on the empty central plains 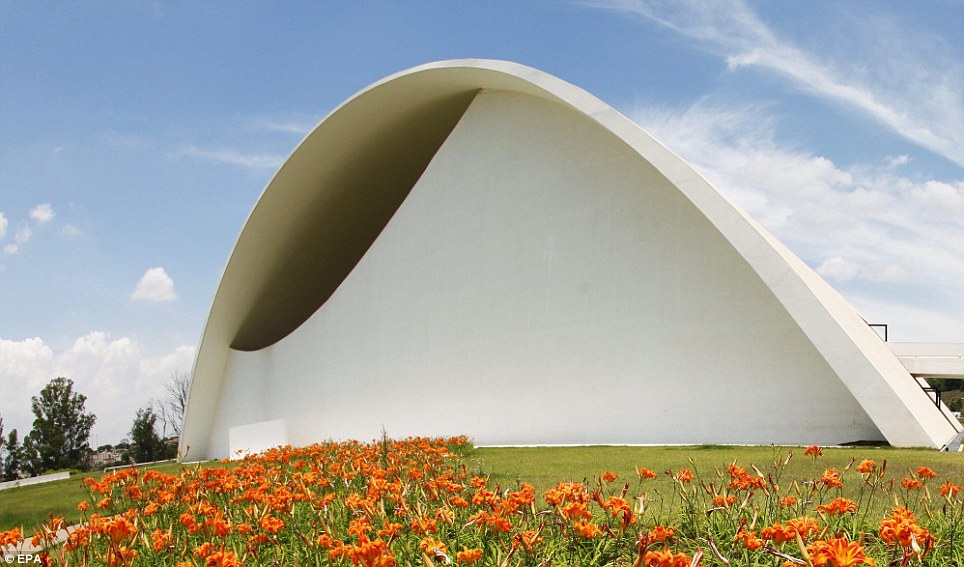 Free-flowing: The Niemeyer-designed Juscelino Kubitschek Auditorium, one of the buildings of the Tancredo Neves Administrative City, the government headquarters of the Brazilian state of Minas Gerais in Belo Horizonte 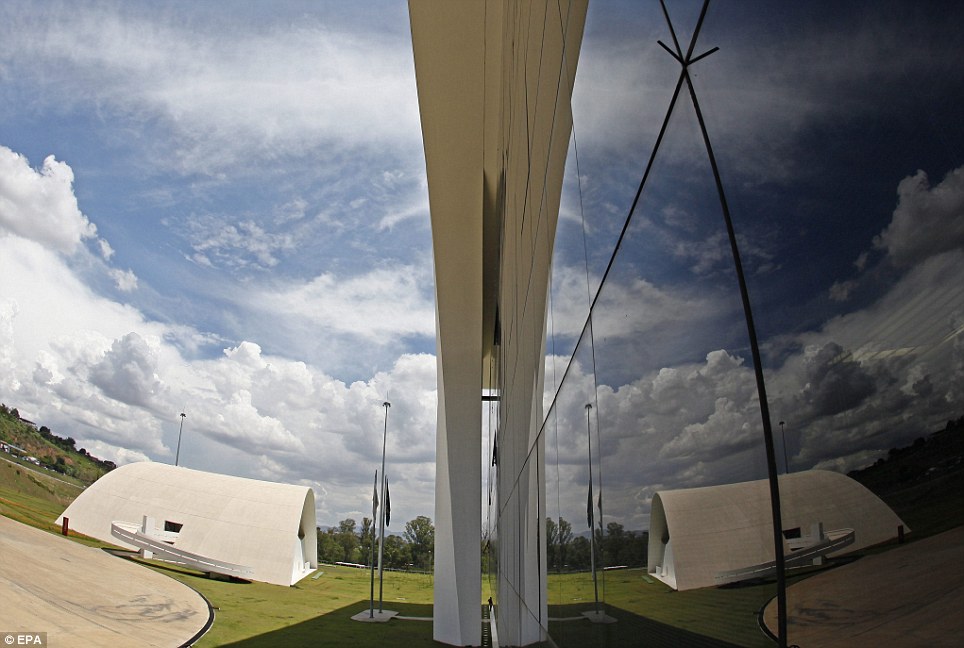 'He never talked about death': Niemeyer's physician said the architect worked on pending projects in the days before his death, taking visits from engineers

His curves give sweep and grace to Brasilia, the city that opened up Brazil's vast interior in the 1960s and moved the nation's capital from coastal Rio.

Niemeyer left his mark in the flowing concrete of the cabinet ministries and the monumental dome of the national museum.

As the city grew to two million, critics said it lacked 'soul' as well as street corners, 'a utopian horror', in the words of art critic Robert Hughes.

But Niemeyer shrugged off the criticism. 'If you go to Brasilia you might not like it, say there's something better, but there's nothing just like it,' he said in an interview with O Globo newspaper in 2006 at the age of 98.

'I search for surprise in my architecture. A work of art should cause the emotion of newness.' 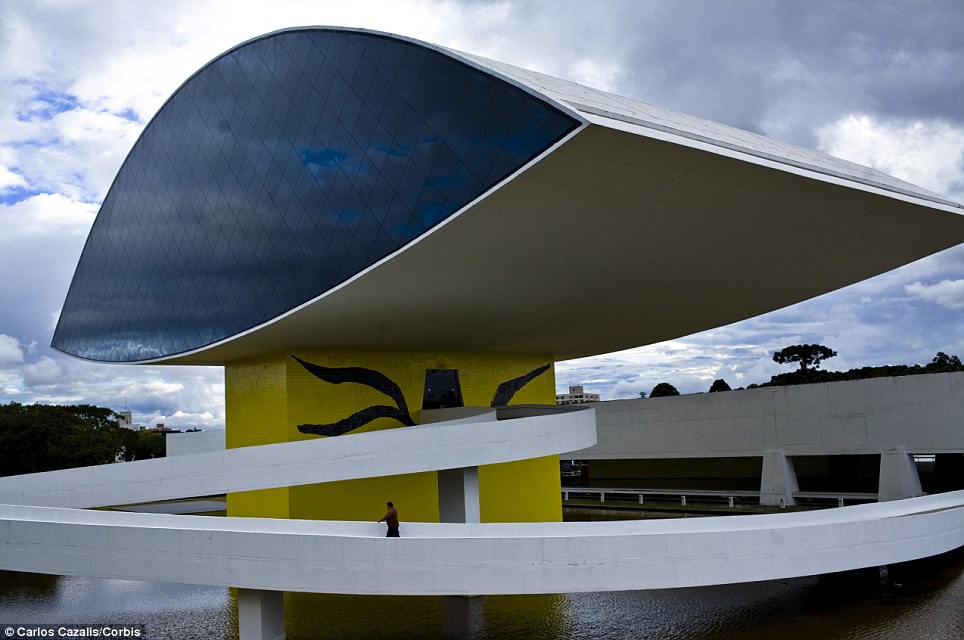 Pioneering: The Oscar Niemeyer Museum, known as the Eye, in the city of Curitiba, which has become a model for modern urbanisation 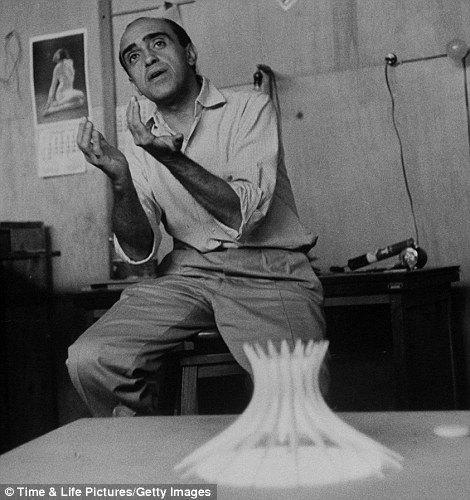 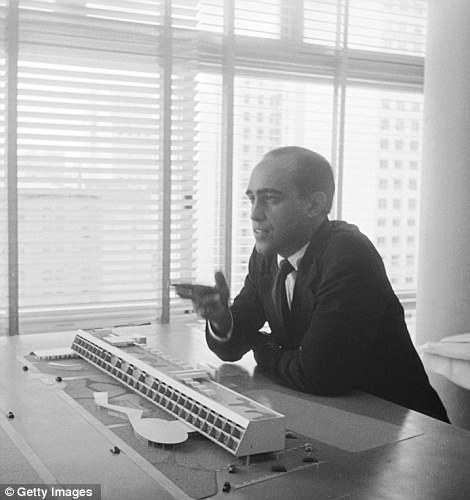 Niemeyer pictured (left) in the shack he used for an office while building Brazil's federal capital, Brasilia, and (right) while discussing one of his designs in 1960 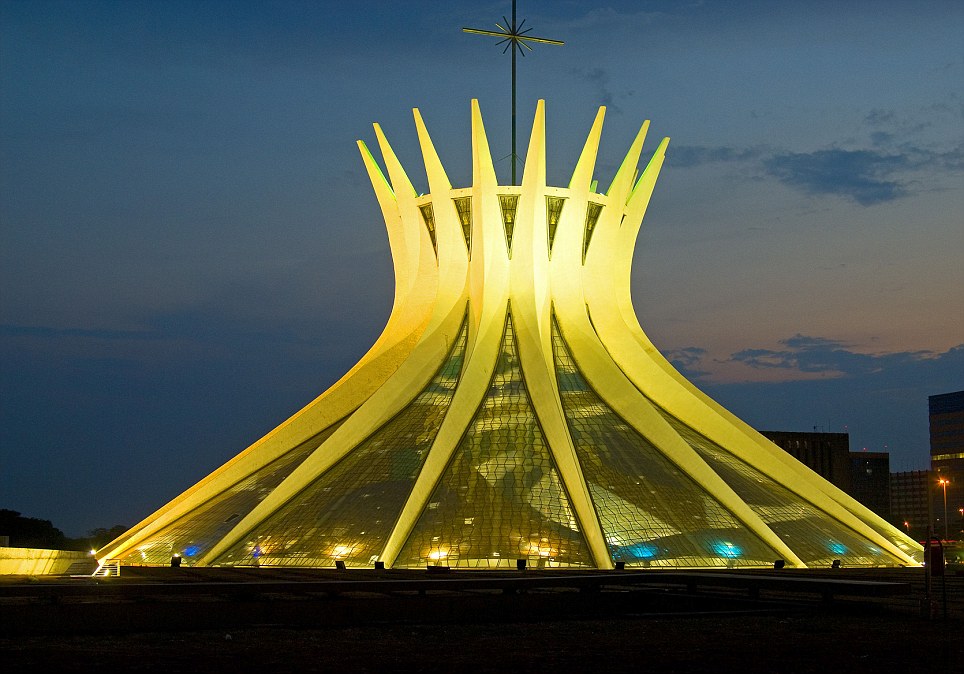 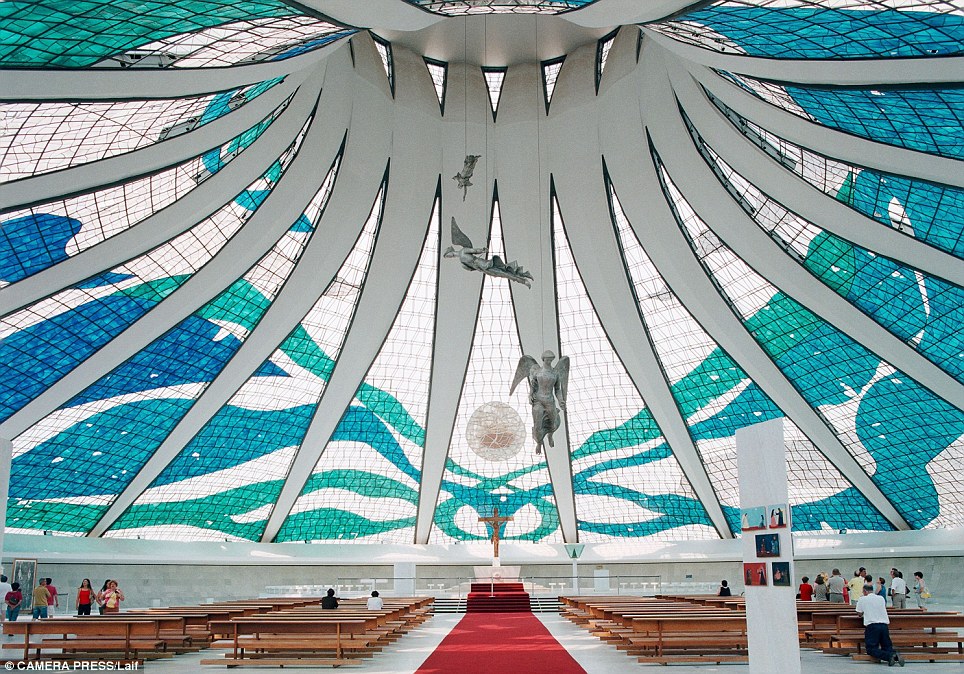 Incredible: A view inside the Cathedral of Brasilia reveals just how astonishing Niemeyer's design ideas were

Even late in life, Niemeyer was striving for renewal. In 2009, he came under heavy criticism for proposing to build a 'Plaza of Sovereignty' in the heart of Brasilia.

Preservationists said the 330ft obelisk he envisaged would mar the very skyline the architect created half a century earlier. Niemeyer relented on the plaza, only to unveil new plans for a 165ft tower in the same spot.

Living well past the century mark, Niemeyer's journey mirrored that of his beloved Brazil, and his restless modernism captured the developing country's sweeping ambitions.

With hundreds of his buildings dotting the landscape, arguably no other architect shared as tight a bond with a country as Niemeyer did with Brazil.

Oscar Niemeyer Soares Filho was born on December 15 1907, in Rio de Janeiro, and earned his architecture degree at Rio's School of Fine Arts.

Working in Costa's office in 1936, he helped design a Rio education ministry building that was a classic of functionalist horizontal and vertical lines.

With modernist giant Le Corbusier, Niemeyer developed the 'brise soleil', a heat protector that enhanced the building's grid design and became an architectural standard in the 1960s. 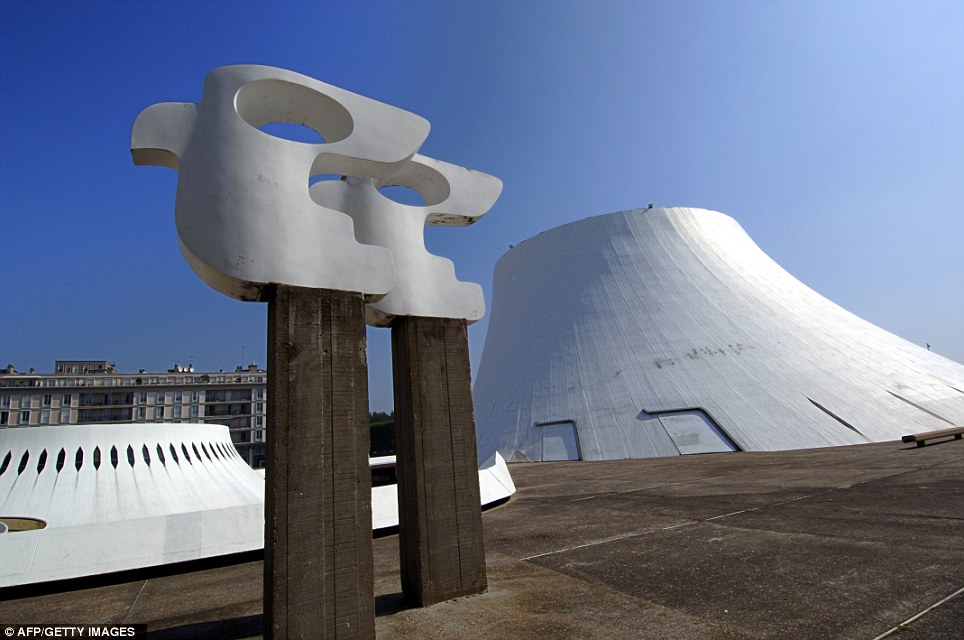 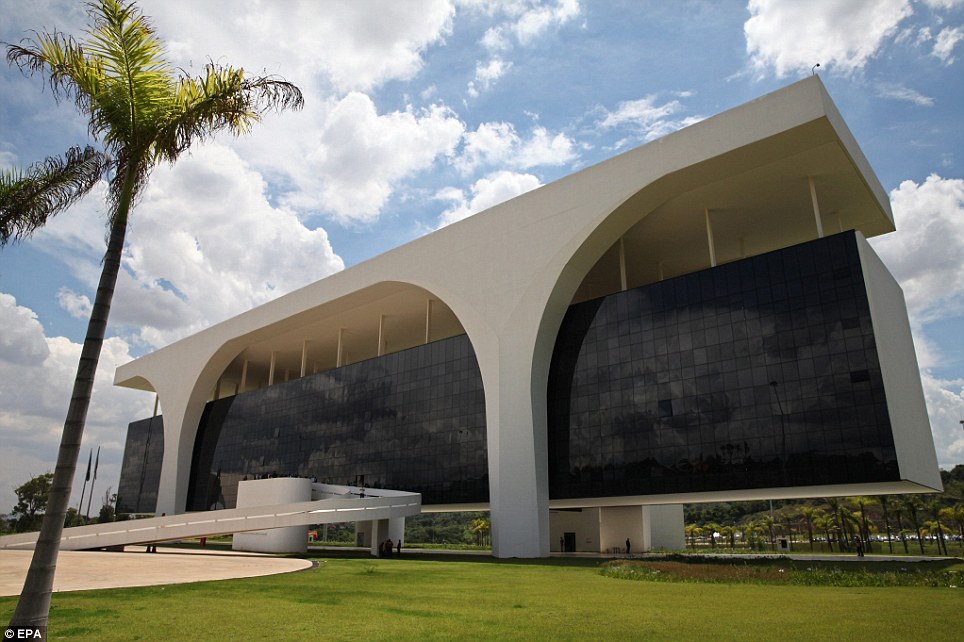 Distinctive: The Palacio Tiradentes, one of the buildings of the Tancredo Neves Administrative City, which Niemeyer designed 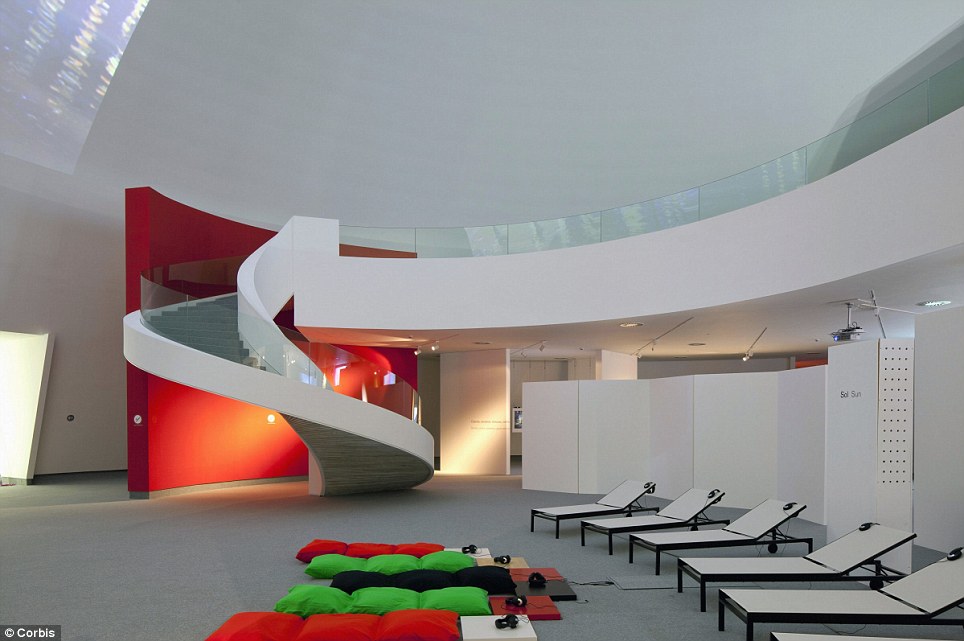 Inside the Oscar Niemeyer centre: Niemeyer said he found inspiration in the 'curves we find in mountains, in the waves of the sea, in the body of the woman we love' 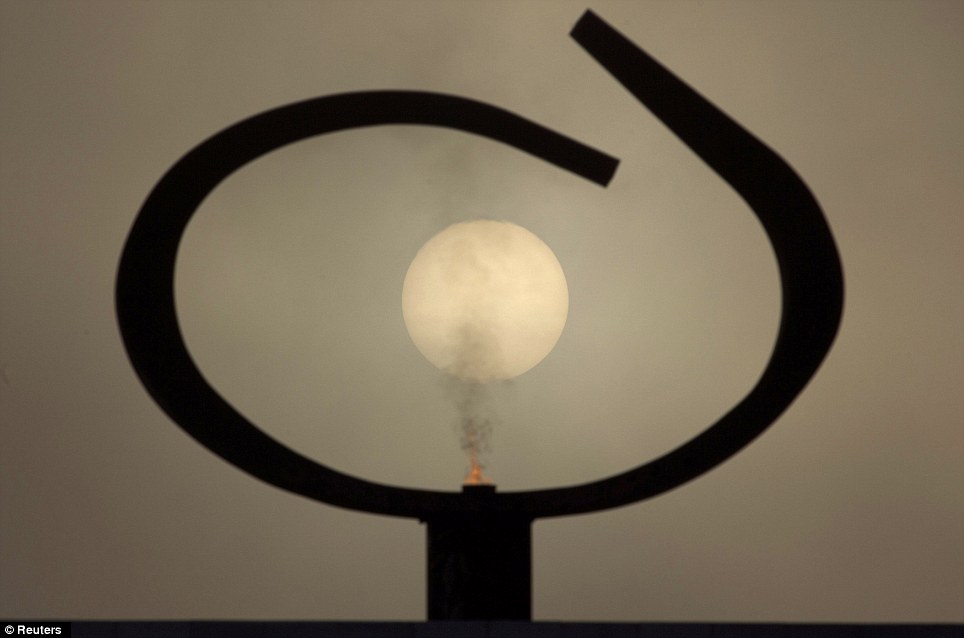 Beautiful: The sun is seen through The Pantheon of the Fatherland and Freedom in Brasilia. Niemeyer shrugged off criticism of Brasilia, saying 'there's nothing just like it'

Niemeyer teamed up again with Le Corbusier in 1947 to design much of the United Nations complex in New York. After months of squabbling with architects - most notably Le Corbusier - Niemeyer came up with the final plan for the complex, including the Secretariat, General Assembly and conference buildings and the Dag Hammarskjold Library.

But Niemeyer already was chafing at the limits of form-follows-function architecture.

His first solo project was the Pampulha complex of buildings set on an artificial lake in the central Brazilian city of Belo Horizonte, now Brazil's third-largest metro area. For the first time, Niemeyer employed the curves and arches that would become his hallmark.

With the slogan of '50 years in five', Mr Kubitschek hoped to prod Brazil into a great leap forward - and inward, away from the coast.

Niemeyer rose to the challenge, testing new forms and technical limits for reinforced concrete. His cone-shaped Metropolitan Cathedral is a circle of curved concrete pillars set like tepee poles with glass mosaic in between.

'I didn't want an old-style cathedral - dark, a reminder of sin,' he said in an interview in the 1990s. 'I wanted something happier.'

After a 1964 coup plunged Brazil into a 21-year military dictatorship, Niemeyer, a lifelong communist, decided to spend more time in Europe. While living in France in 1965, he designed the headquarters of the French Communist Party.

During the dictatorship he also designed the centre of the Mondadori publishing house in Italy, Constantine University in Algeria and other projects in Israel, Lebanon, Germany and Portugal.