11 Illuminating Quotes From the Canon of Dystopia

If you’re stirred by these dystopian quotes, amble down our author quotes archive for more.
George Orwell is suddenly, understandably en vogue — 1984 spiked on Amazon and then sold out, his scathing 1940 review of Mein Kampf has been dredged up, and reading groups are springing up like toadstools, eager to discuss the ways language can be manipulated by would-be tyrants in order to suppress independent thought. 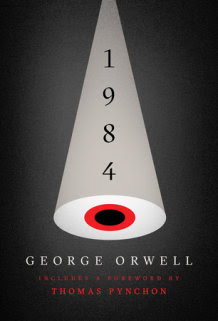 by George Orwell with a Foreword by Thomas Pynchon
BARNES & NOBLEINDIEBOUNDAMAZONIBOOKS


Topical though he may be, Orwell certainly isn’t the only game in town when it comes to predicting increasingly dire futures for mankind. While he’s definitely the forefather of the booming genre of dystopiana, other authors have since picked up that torch and used it to illuminate some very dark corners indeed. At this point it’s no longer a matter of which predictions will come true, but how elegantly they’ll all knit together in unison.
The following quotes are like glimpses into various portholes, each author imparting their own particular view of life in a no-longer-quite-recognizable society. The bad news is, as a civilization we’re probably boned; the good news is we’ve managed to leave behind an elegant, impressively thorough catalog of our collective failures. (We were, after all, only human.)
Samuel R. Delany, Dhalgren, 1975“It is not that I have no past. Rather, it continually fragments on the terrible and vivid ephemera of now.”
Margaret Atwood, The Year of the Flood, 2009“We shouldn’t have been so scornful; we should have had compassion. But compassion takes work, and we were young.”
Philip K. Dick, The Divine Invasion, 1981“What a tragic realm this is, he reflected. Those down here are prisoners, and the ultimate tragedy is that they don’t know it; they think they are free because they have never been free, and do not understand what it means.”
Steve Erickson, Arc d’X, 1993“When the thing that emerged from the collision of sex and freedom, called love, collided with the thing that emerged from the collision of time and memory, called history, the dreams began to come.”
Suzanne Collins, The Hunger Games, 2008“They’re already taking my future! They can’t have the things that mattered to me in the past!”
Haruki Murakami, 1Q84, 2009“Things may look different to you than they did before. But don’t let appearances fool you. There’s always only one reality.”
Octavia Butler, The Parable of the Talents, 1998“Leave your sinful past behind, and become one of us. Help us to make America great again.”
David Foster Wallace, Infinite Jest, 1996“Yes, I’m paranoid — but am I paranoid enough?”
Cormac McCarthy, The Road, 2006“Perhaps in the world’s destruction it would be possible at last to see how it was made. Oceans, mountains. The ponderous counterspectacle of things ceasing to be. The sweeping waste, hydroptic and coldly secular. The silence.”
Roger Zelazny, Prince of Chaos, 1991“Don’t wake me for the end of the world unless it has very good special effects.”
Edna St. Vincent Millay, Epitaph For The Race of Man, 1934“Before this cooling planet shall be cold,Long, long before the music of the Lyre,Like the faint roar of distant breakers rolledOn reefs unseen, when wind and flood conspireTo drive the ships inshore — long, long, I say,Before this ominous humming hits the ear,Earth will have come upon a stiller day,Man and his engines be no longer here.High on his naked rock the mountain sheepWill stand alone against the final sky,Drinking a wind of danger new and deep,Staring on Vega with a piercing eye,And gather up his slender hooves and leapFrom crag to crag down Chaos, and so go by.”
Posted by Cabecilha at 7:25:00 PM No comments:

This Side of Syria: Best Books to Understand the Syrian Experience

Homs, Syria, September 2013/Photo © ART production / Shutterstock, Inc.
Americans have long prided themselves on the idea that we are a nation of immigrants. Even considering the complexity of this notion, the idea itself remains a point of emphasis in our national identity. One of the most enduring symbols of the United States is a woman holding a torch aloft in a harbor beckoning travelers to safe refuge, our Statue of Liberty. And yet in times when we have perceived that our security is waning, we lash out at these very immigrants who, in times of relative safety, we claim as a point of national pride.
Now, in the midst of a staggering global refugee crisis, we are seeing the fabric of our nation’s identity being tested once again. The brutal civil war plaguing Syria has displaced millions, forcing Syrians to flee their war-torn home and seek solace from inhumane and terrifying conditions. The United States has often stood at the forefront of refugee resettlement, but under the cloak of fear, President Trump is pushing this country to once again close off its borders.
It is, unfortunately, easy to ignore this crisis, to forget that those fleeing are seeking refuge from cruel circumstance – and often death. Literature once again, though, proves to offer a powerful window of empathy – a reminder of the essential humanity in all of us. In times like these, empathy and understanding are paramount. To hopefully help gain a better understanding of Syria, its people, and its rich literary tradition, we’ve pulled together a number of books and novels by Syrian authors or simply about the Syrian experience.
Posted by Cabecilha at 7:24:00 PM No comments: