Painted sometime between 1490 and 1510, The Garden of Earthly Delights is perhaps Hieronymus Bosch’s most ambitious work. Formed of three panels and totalling almost four metres in length, the triptych is a dizzyingly detailed and delightfully surreal work, the possible meanings of which have kept scholars busy for centuries.
The left panel — sometimes referred to as the Joining of Adam and Eve — is home to a paradise-like scene from the Garden of Eden, most likely of that moment in which God presents Eve to Adam. Although it clearly has its routes in the Biblical story, Bosch’s particular take on it — with its strange beasts, Adam’s almost-lustful gaze – is unlike anything else depicted in the history of Western art. The middle panel, the largest of the three, seems to continue from the “first” (the triptych is most likely meant to be read from left to right), with their skylines matching up. The settings also seem to echo each other, though the middle panel is quite different in tone. Here the scene is one of unbridled frolic, the landscape teeming with naked figures, along with various oversized animals, plants, and enormous fruit — a mixture of the real and fantastical. With so many cavorting nudes there is an undoubtedly erotic element to the panel, yet one shot through with a feeling of innocence. According to the Bosch scholar Wilhelm Fraenger, this eroticism is of ambiguous import, at once an allegory of spiritual transition and a playground of corruption. Chromatically the right panel differs markedly from the others and is clearly a depiction of Hell, a familiar setting for the works of Bosch. And he doesn’t hold back. The scene screams with weird and nightmarish imagery: knife-wielding giant ears, man-eating bird-monsters, unwanted advances from a porcine nun, and in one remarkable tableau, a giant pink monster singing from a musical score emblazoned on a human backside.
Closing up the left and right panel reveals the exterior panels of the piece: what is almost certainly a depiction of the creation of the world. The tiny figure of God can be seen in the upper left hand corner, and above him is inscribed a quote from Psalm 33 — Ipse dixit, et facta sunt: ipse mandāvit, et creāta sunt — For he spake and it was done; he commanded, and it stood fast. 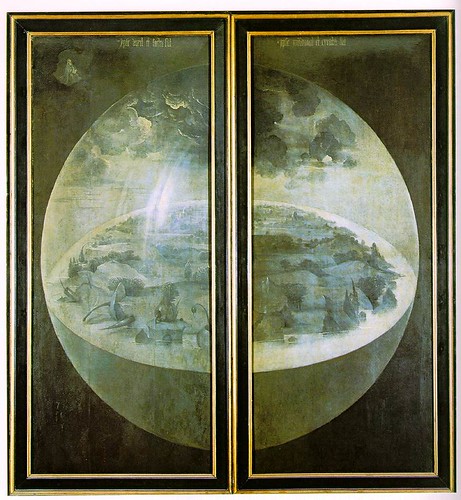 In celebration of the 500th anniversary of Bosch’s death (he died on 9 August 1516), we offer up a selection of details from this his most famous picture. By doing so we hope to show a little of his genius and encourage you to explore this remarkable work for yourselves. For those with a strong internet connection (we couldn’t actually manage it ourselves) we highly recommend having a go at downloading the enormous digital version (more than 30,000 pixels wide) here on Wikimedia Commons. 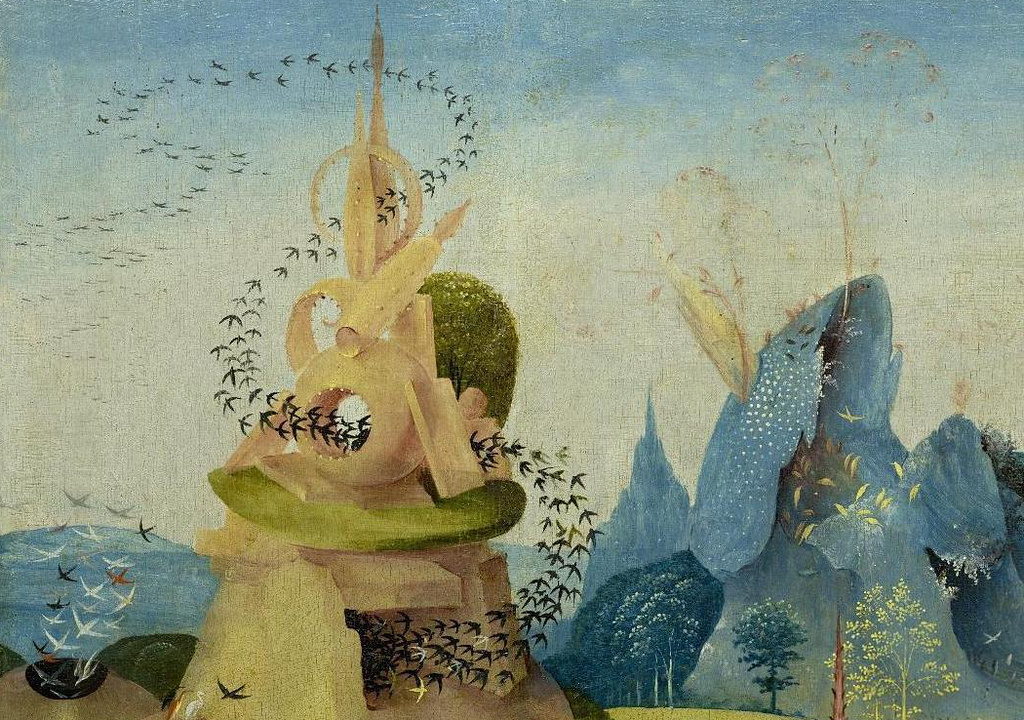 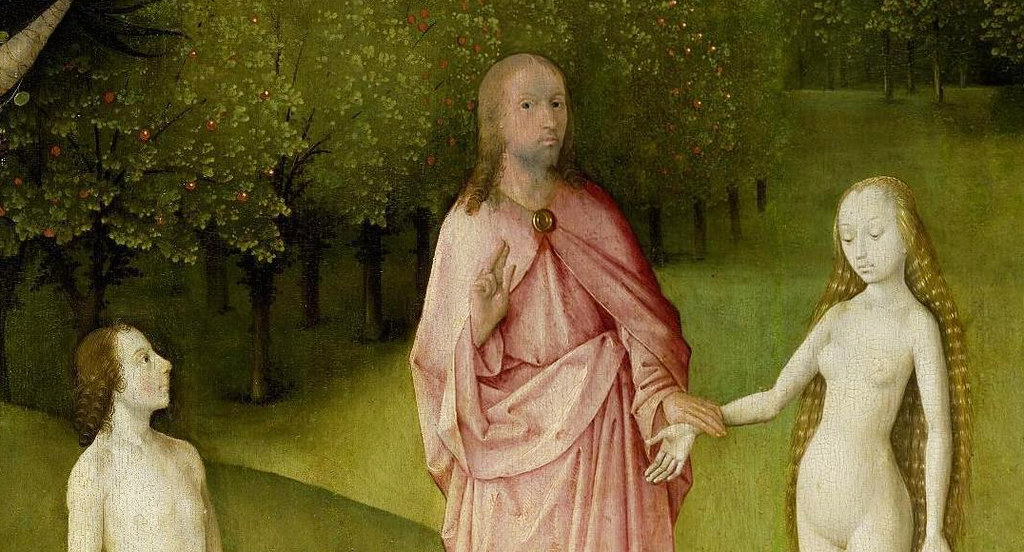 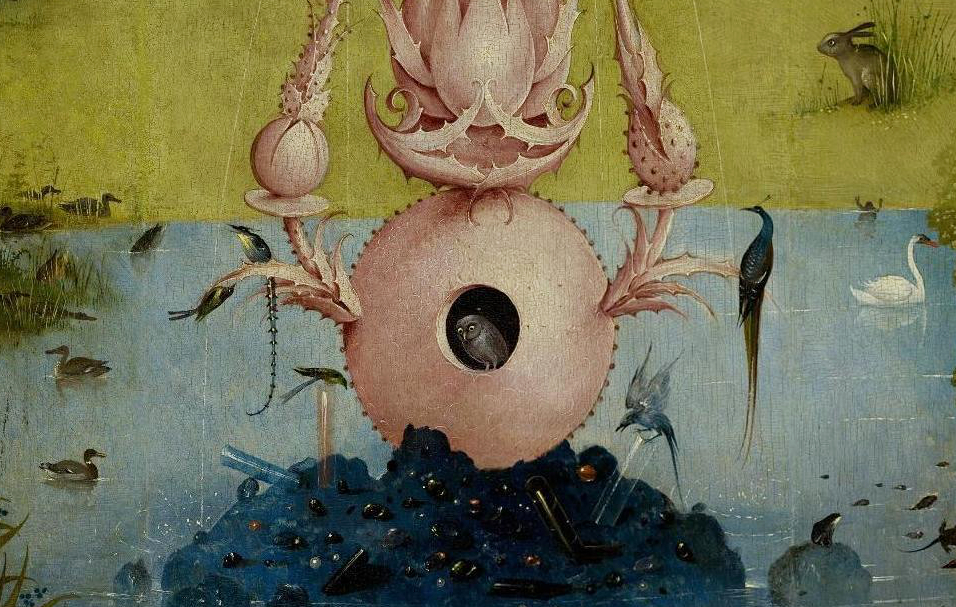 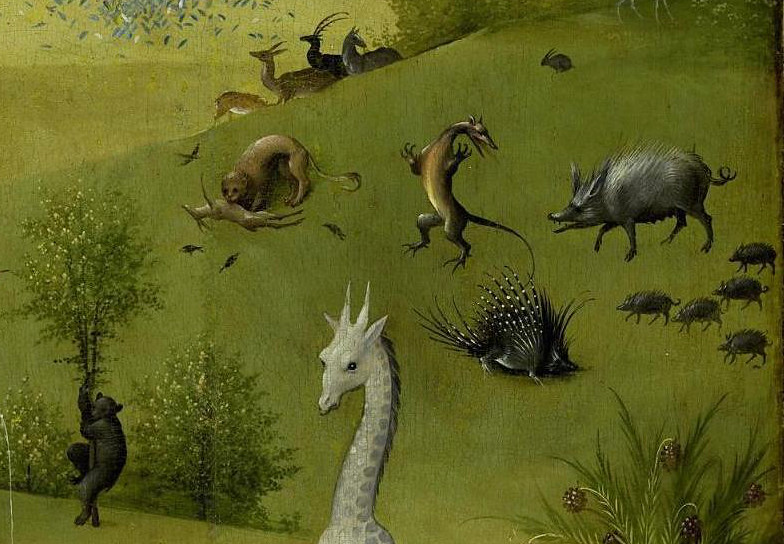 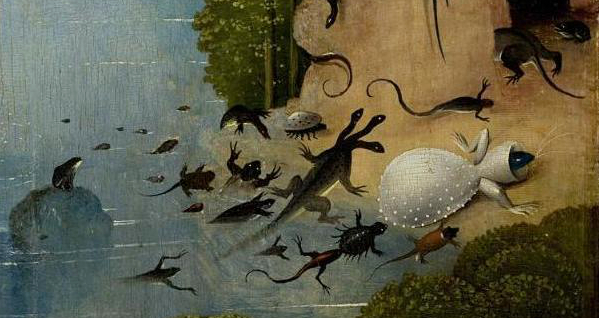 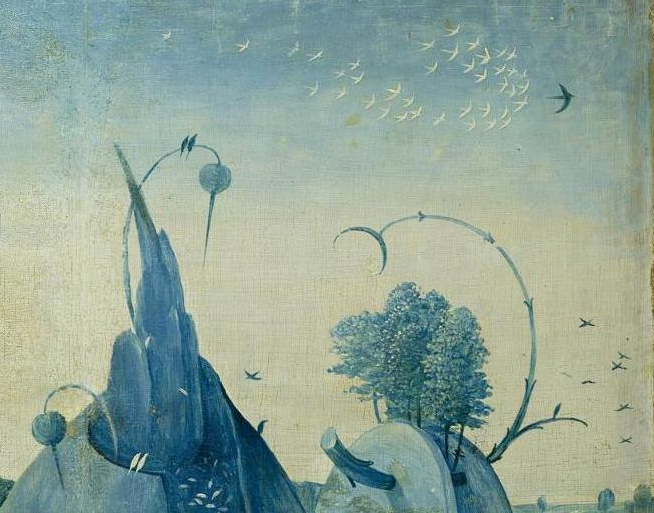 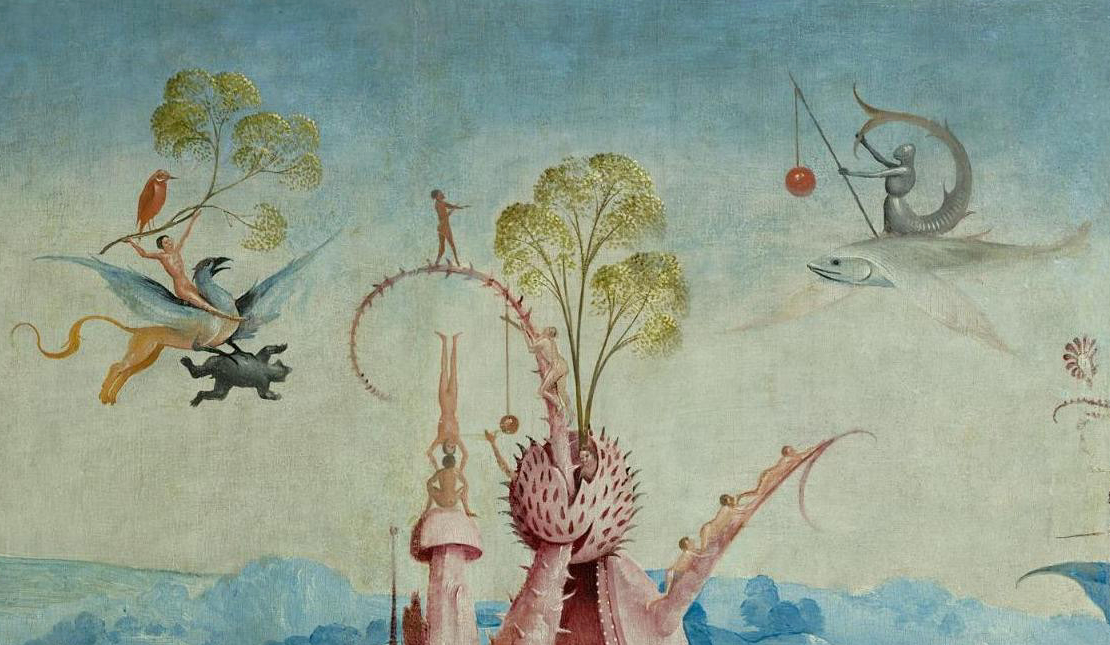 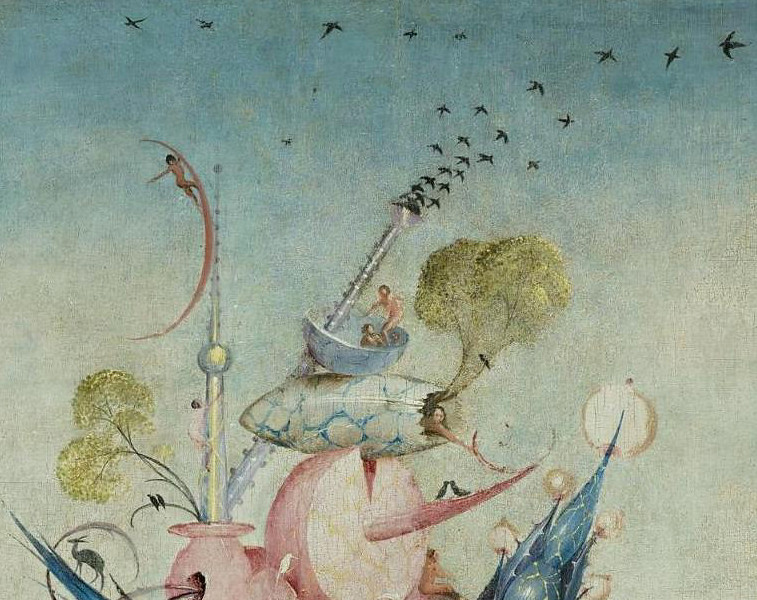 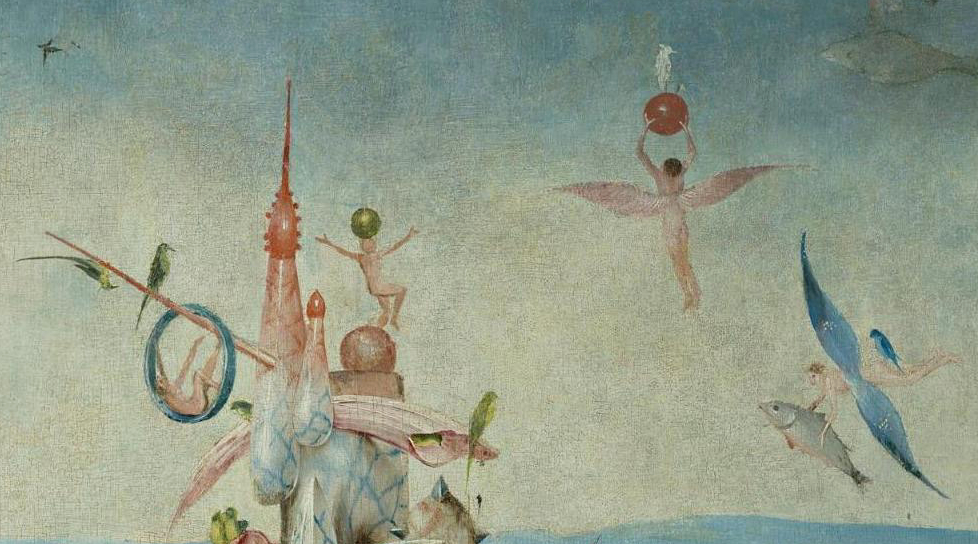 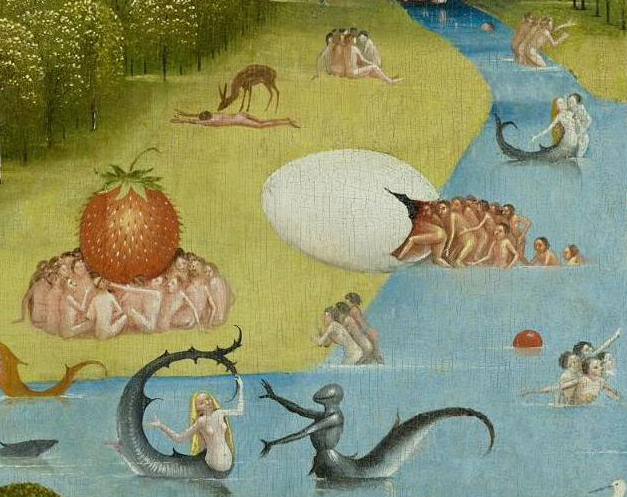 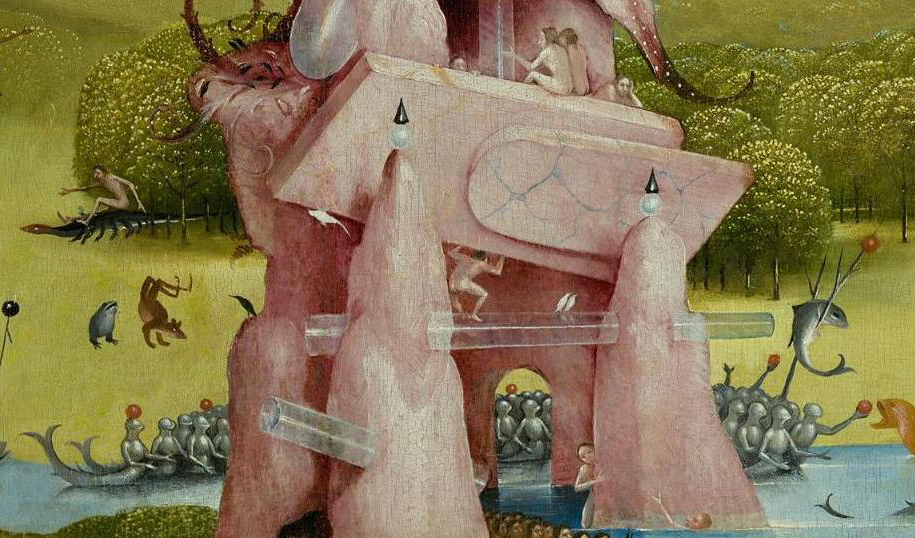 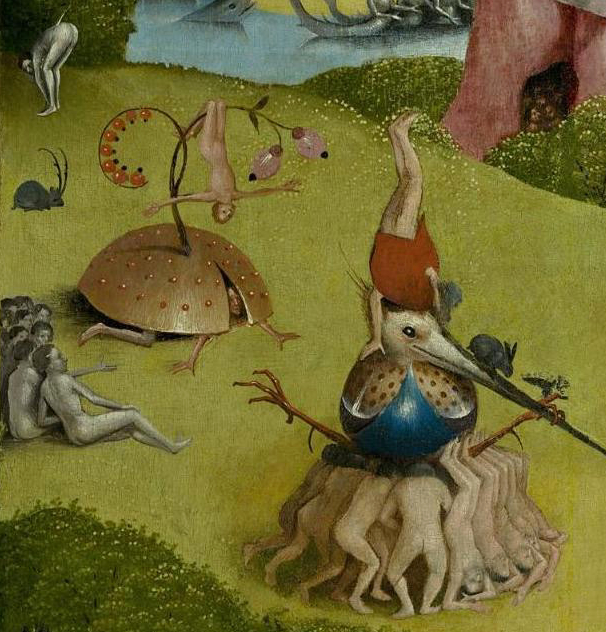 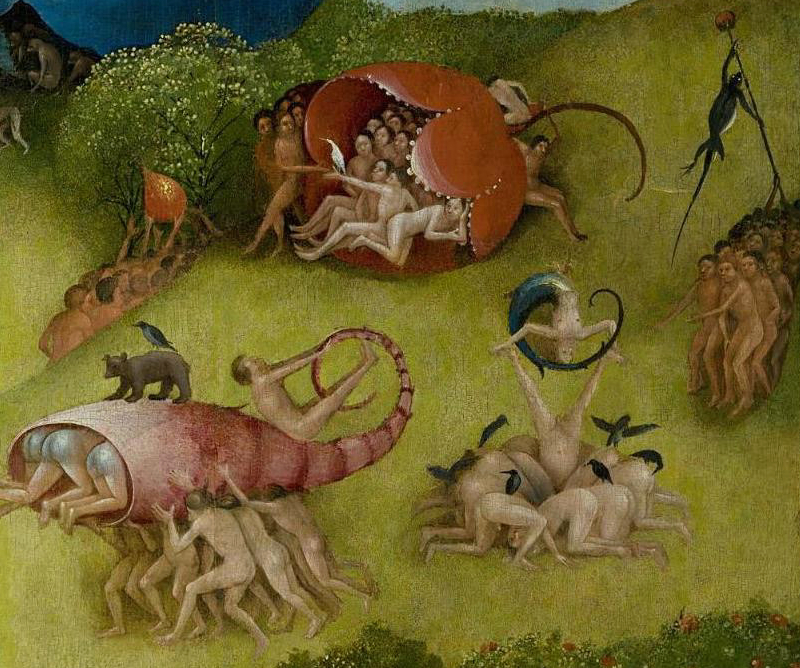 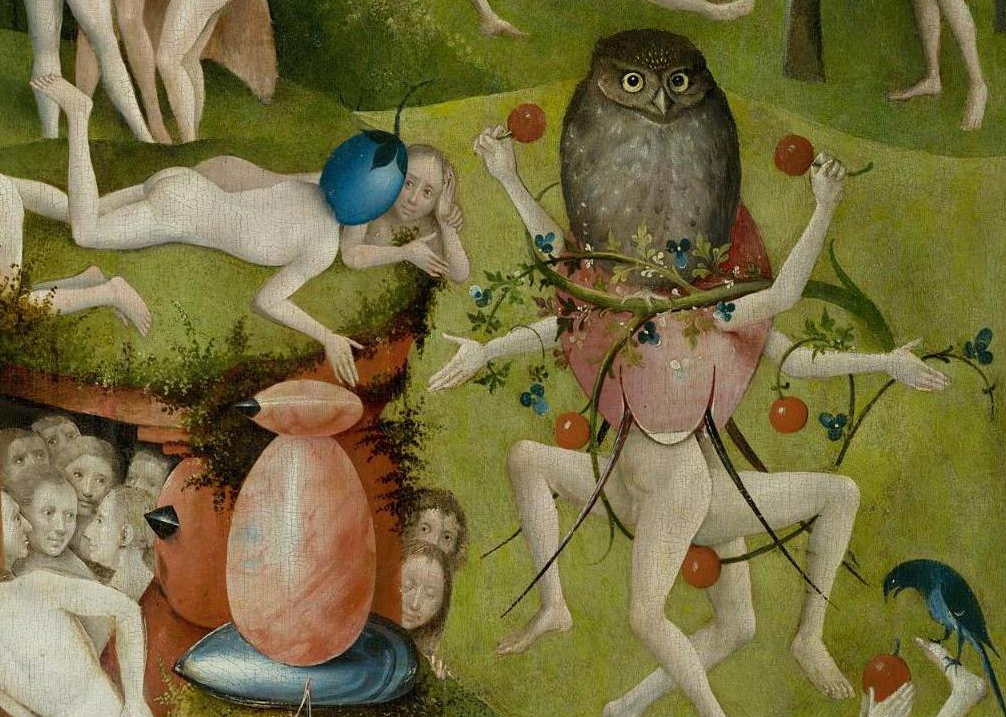 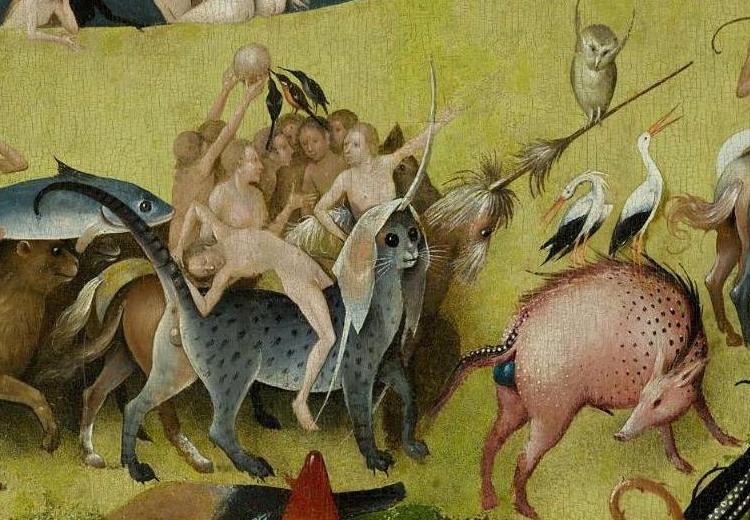 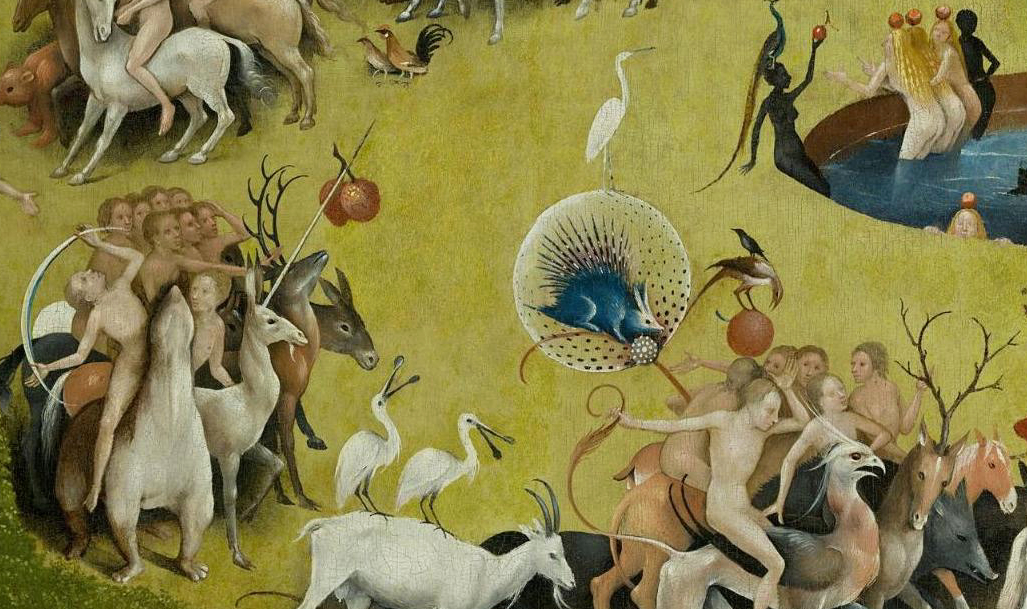 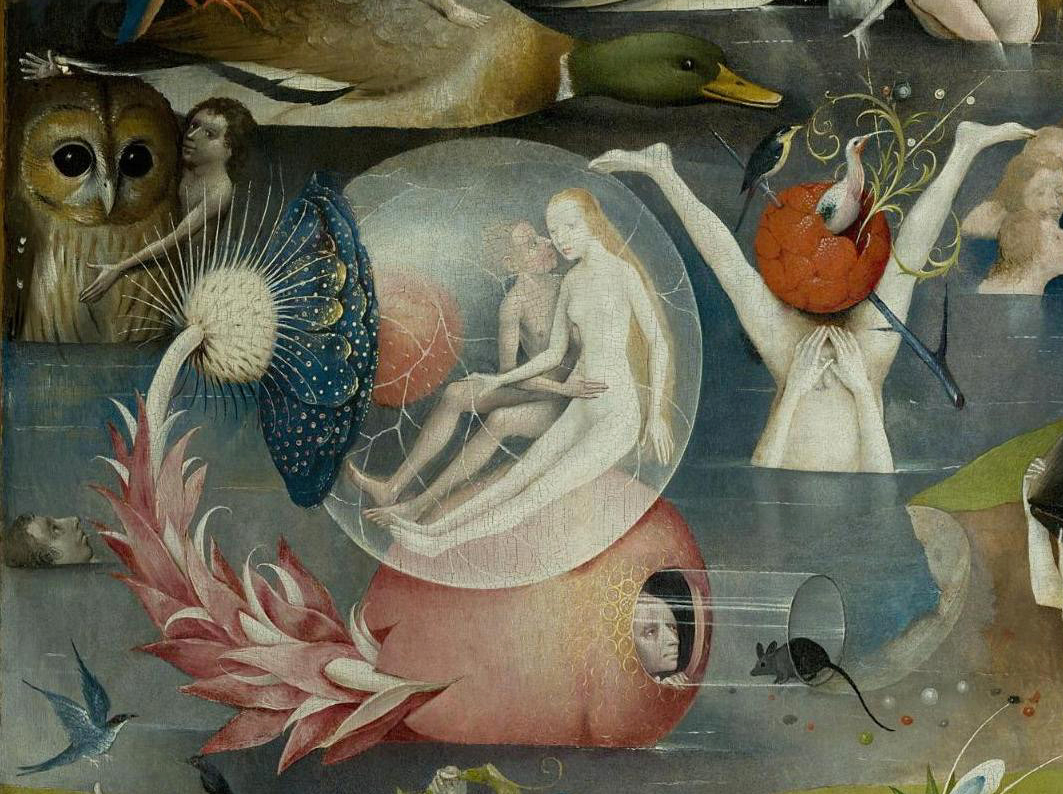 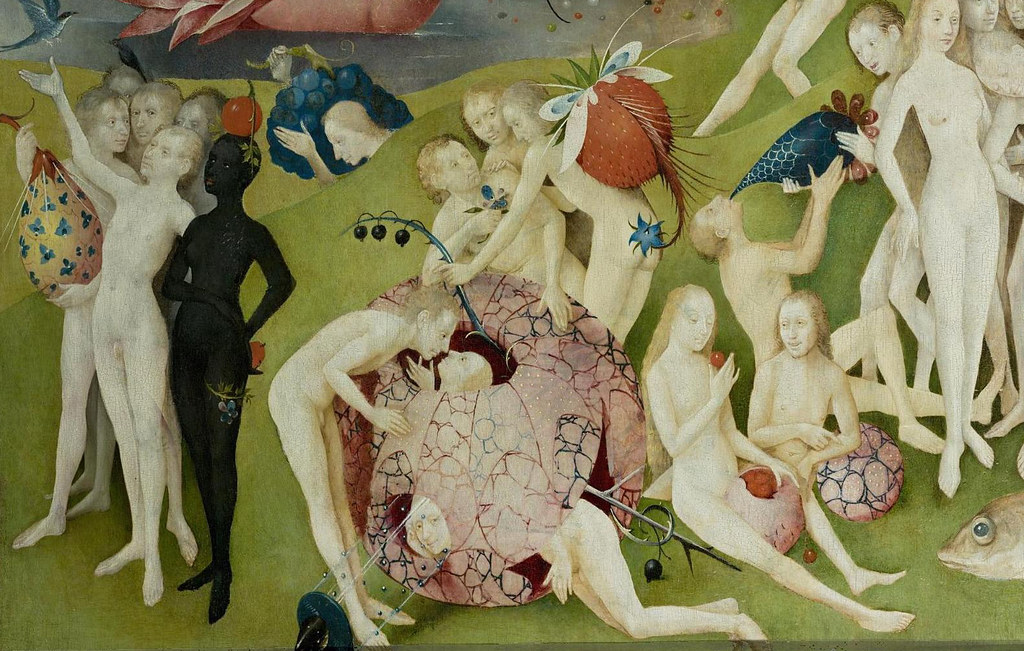 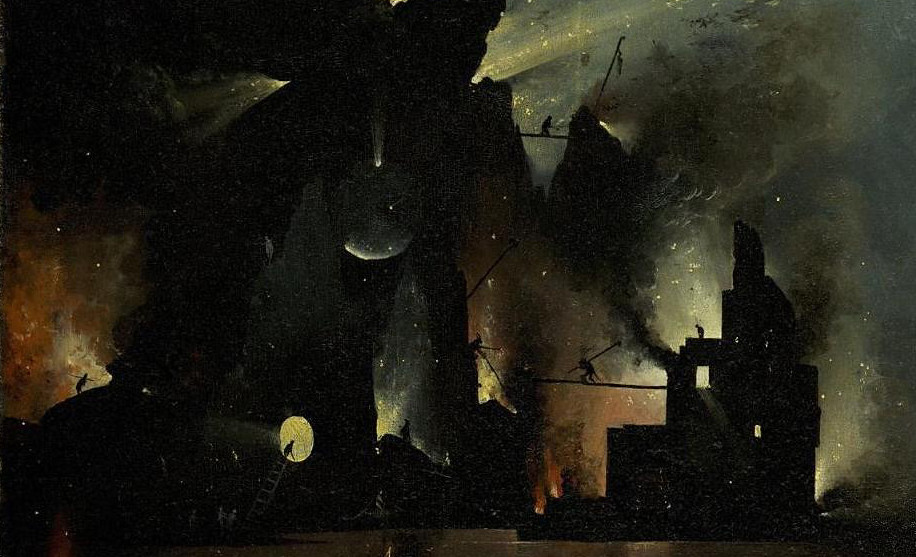 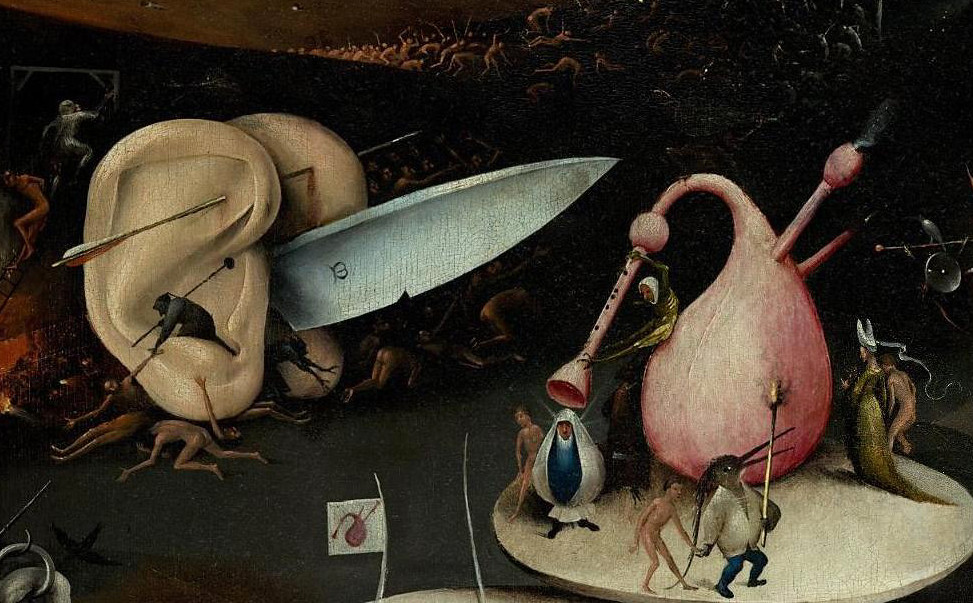 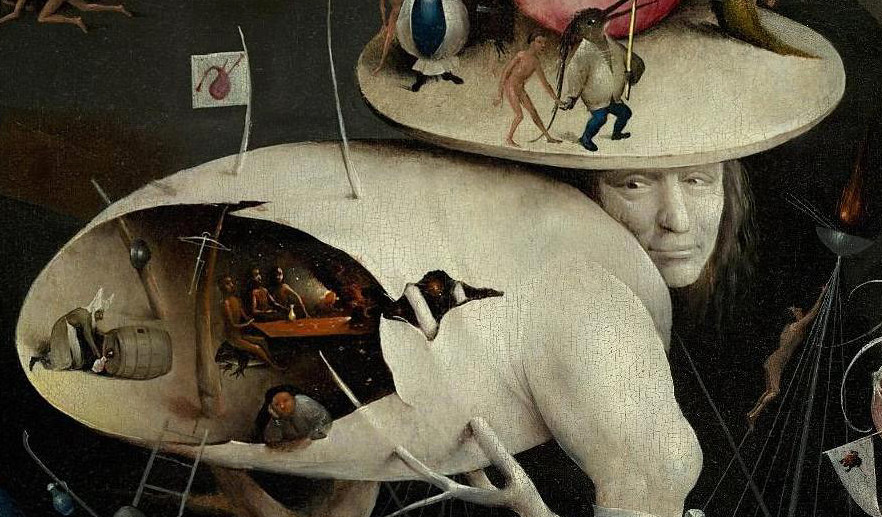 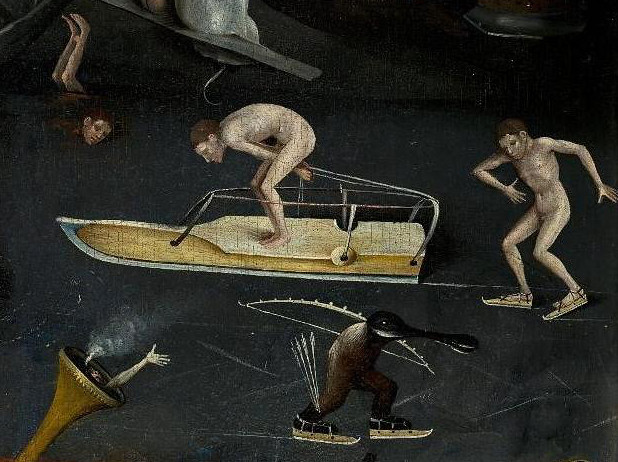 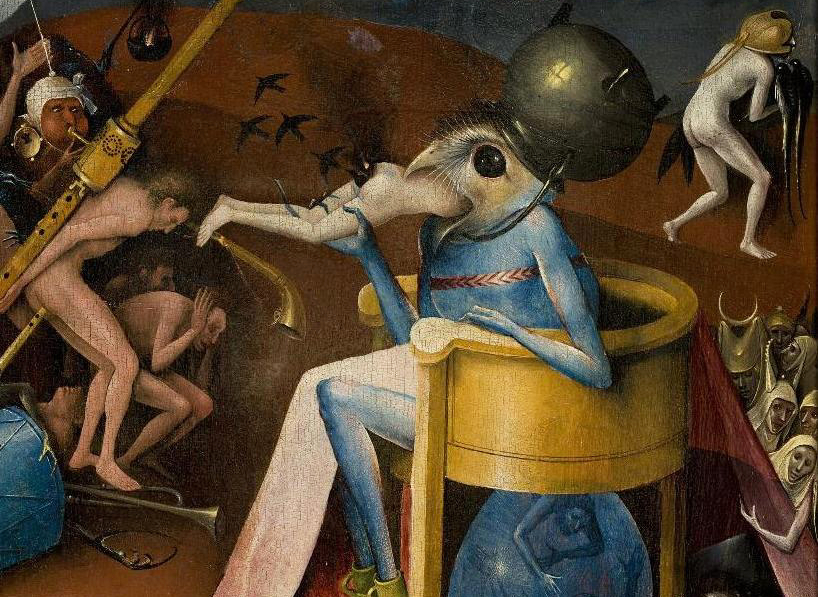 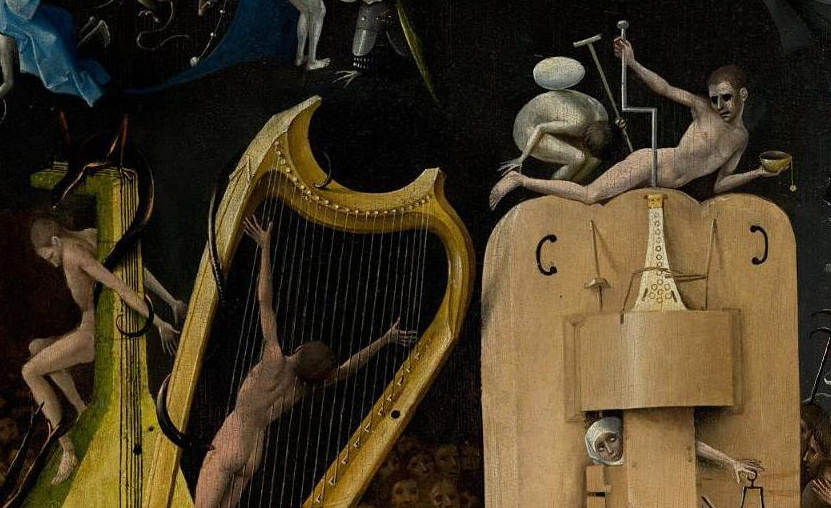 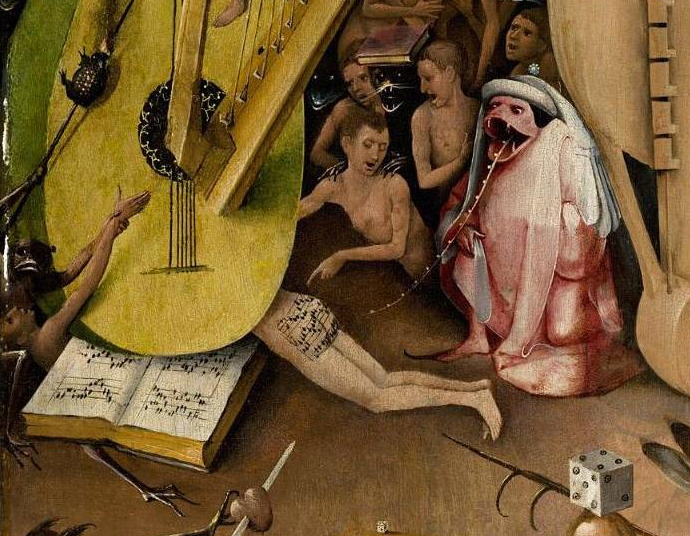 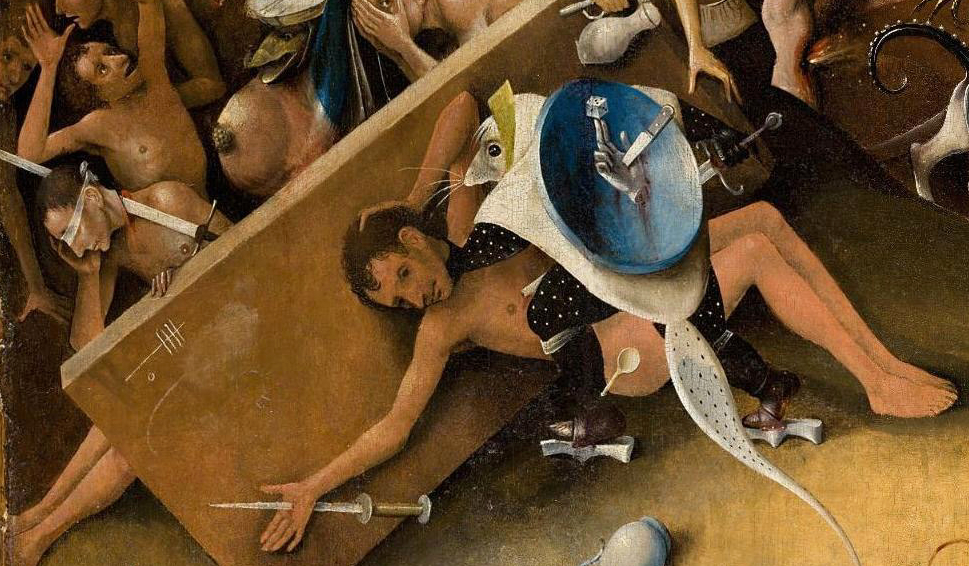 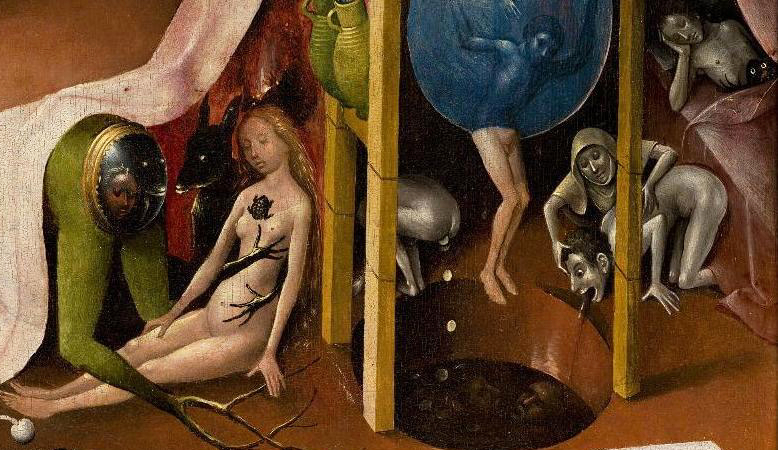 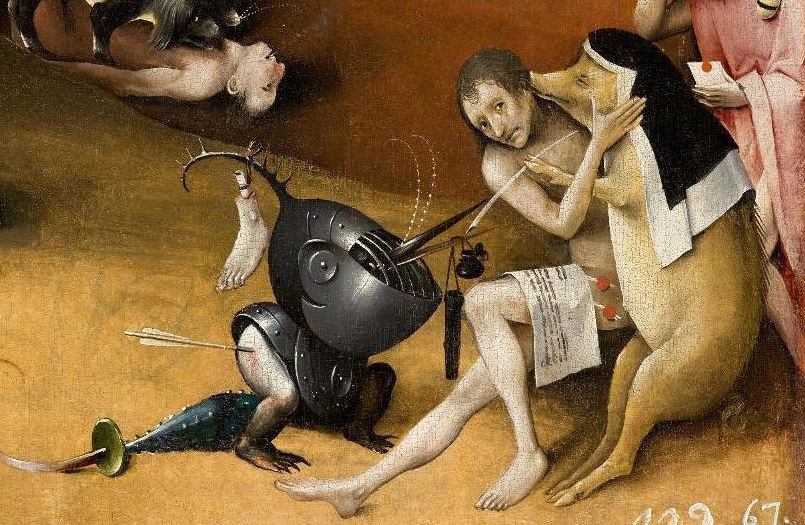 If you liked this...

Please consider supporting us or subscribing to our fortnightly newsletter
Posted by Cabecilha at 6:06:00 PM No comments: