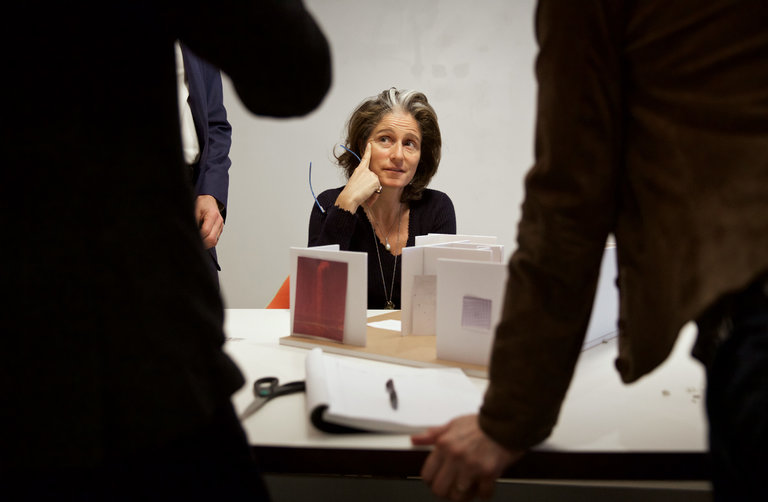 Who knew you could parse Benjamin Moore Classic Gray by percentages?
That’s what Dominique Lévy was doing with her team recently while readying their gallery’s booth for the Art Basel art fair in Switzerland, which starts next week — determining how deep the shade of a wall should be behind a Gerhard Richter landscape (50 percent? 75? 100?).
It’s hard to imagine paint color making much of an impression on the moneyed collectors who will be breezing through the exhibition hall near the Rhine.
But for Ms. Lévy, even the most minute detail matters. That is because she is one of the many leading figures in the art world who consider Art Basel the most important art fair — the one they work on the hardest because it attracts the most international, serious clients.
Art fairs, having proliferated around the world, are a potent force in the art market, a kind of one-stop shopping that allows collectors access to major galleries from numerous countries without having to visit the galleries themselves.
Advertisement
Continue reading the main story
As a result, fairs account for about 40 percent of gallery sales by value, according to the Tefaf Art Market Report, making the limited number of spots at top fairs especially coveted: More than 800 galleries competed for about 300 booths in Basel this year.
During the past few weeks, Ms. Lévy allowed this reporter to be privy to her extensive preparation in New York for Basel, offering a rare window into the intense process galleries go through to bring their A game to the fair.
“It’s really your one moment where you can show who you are,” she said. “It’s acutely important for existing relationships, new relationships, the way the art world perceives you.”
Continue reading the main story

Advertisement
Continue reading the main story
“You’re put to really high standards,” she added. “Every collector would say to you Art Basel is the most important art fair.”
Because Ms. Lévy is Swiss, Art Basel also matters most for personal reasons. The dealer, who recently announced that she would be taking over the whole building at her Madison Avenue gallery, has been coming to this fair since she was a child. (Her mother still attends.)
“Art Basel is what made me want to be a gallerist and an art dealer,” she said.
So Ms. Lévy pulls out the stops, bringing a staff of 11 (six from New York, three from her London gallery and two from her Geneva gallery) for a week; enlisting an architect, painter and lighting designer for her booth; entertaining clients with a major event — this year a circus-themed party created by a tightrope acrobat with “dinner under the big top”; even insisting on a specific brand of Swiss chocolate in the booth (Villars).
“I won’t go as far as to say I curate the bowl of chocolate, but...,” Ms. Lévy joked.
Her total spending on all this is steep: more than $300,000. (She also produces a glossy brochure and previously bought Le Corbusier furniture for the booth.) But for Ms. Lévy, the fair is a worthwhile investment — a gallery’s calling card and a crucial place to make connections.
“There’s not a year where we haven’t met a minimum of three to five meaningful people,” she said, describing important buyers.
Advertisement
Continue reading the main story
There is a hierarchy to the placement of booths at the fair, and Ms. Lévy has worked her way up, having attended as part of the former L&M Arts gallery before starting her own shop three years ago. “I had to graduate from behind the toilet,” she said.
“Now I’m opposite Zwirner and near Nahmad,” she added, naming two prominent galleries. “It’s a fantastic position, but it took time.”
From the moment the fair ends, Ms. Lévy said, she starts planning the next one, keeping her eyes open for art she may want to sock away for the next year. The preparation is both exhilarating and exhausting.
“Basel is the fair where I’ve lost the most sleep,” she said.
The fair itself is also a marathon; Ms. Lévy said she barely eats and never sits down, despite high heels — “I can’t sell art in flat shoes” — bringing two pairs along with an ice bucket in which she soaks her feet after the first four hours.
“Then I can do another four hours,” she said.
Booths at the fair used to be highly specialized, Ms. Lévy said — with one dealer, for example, focusing on postwar French works. Now a preoccupation with contemporary art has made it more homogenized.
So Ms. Lévy seeks to stand out, providing a complete art experience within the confines of her booth, combining the contemplative nature of a literary salon with the competitiveness of, say, a couture sample sale.
“What depresses me the most is if people walk past the booth and don’t stop,” she said. “I want people to come in and then have a journey.”
The theme of Ms. Lévy’s booth this year is postwar Europe and America, showing how a Pierre Soulages painting, for example, echoes a David Smith sculpture.
Advertisement
Continue reading the main story
“There is a harmony, which I think is important,” she said, “a story to be told.”
At a recent meeting — at which Ms. Lévy presided with an aura of elegant efficiency some find intimidating — staff members pored over an architectural model of the booth, moving mini reproductions of the artworks around on the foamcore walls.
“Has the Calder arrived?” ... “The small silver Stella is not coming” ... “The Fontana’s being framed right now” ... “When will you know if the Ryman is coming?”
Considerable time was devoted to the composition of artworks in the booth; placing them is an art in itself. “Maybe we have to go back to this idea of giving Günther Uecker a complete area,” Ms. Lévy said.
“The Burri and the Fontana are both small and intimate paintings,” Ms. Lévy said. “Do they need to be incredibly close to each other?”
Emilio Steinberger, the gallery’s senior director, said, “They have to be in the same vicinity” because the two works have a strong relationship.
The team analyzed the booth’s circulation; how to best feature the sculpture; how to create moments of stimulation and repose.
“The other side of the Richter has to be incredibly soft and quiet,” Ms. Lévy said. “If the Calder goes here, I would love that Fontana next to it. You want the clean Stella here — you really want a moment of breathing.”
If last year’s booth “had a preciousness,” Ms. Lévy said, featuring the likes of Ryman and Giacometti, “this year is much rawer.”
Advertisement
Continue reading the main story
Ms. Lévy was particularly excited about a large canvas by the Russian artist Nicolas de Staël, unusual for its multiple layers of paint. “We want to give this painting a presence because it hasn’t been seen for 40 years,” she said. “It’s Barnett Newman, it’s Pollock — it takes your guts.”
Even as the booth must have a cohesion, Ms. Lévy said, it also needs to convey a sense of the gallery; for example, that it recently began to represent the artist Pat Steir.
But while the booth demands the care and curation of an exhibition, it is ultimately about selling art, Ms. Lévy said, not just looking at it.
“This is not an exhibition, this is an art fair,” she said. “It’s about commerce.”
Posted by Cabecilha at 4:52:00 PM No comments:

Behind the Lenses: Interview with Photographer Nuno Veloso

Behind the Lenses: Interview with Photographer Nuno Veloso

It is no secret that fashion is a growing industry in Macau. Granted it might still have a long way to go, but mostly it is doing good. As like any other industry, fashion involves a number of different professions. Models and designers, for sure but also stylists, make-up artists, hairstylists, writers and, last but not least, photographers. It is in this last category that Nuno Veloso fits in the grand scheme of things. However, this fashion photographer is on to another entrepreneurship challenge, a project that sounded (and looked) exciting

This Portuguese who has grown up in Macau, studied in Porto and worked in Portugal, London, Paris, Hong Kong and Macau,  is a true citizen of the world, a great fashion photographer and my personal friend. To be frank, I first met Nuno in a fashion shoot for one of the local magazines. Being in the business for some time by then, the first thing I noticed was the refreshing lack of artistic ego he had. Don’t get me wrong, Nuno is a true artist of his craft, he just very nice about dealing with clients too!

As soon as you enter the Core Studio in Nape, the headquarters for Nuno Veloso & Core Productions, it will breathe professionalism. It will also immediately show-off some of Nuno’s best work as it is nicely hanged on the walls. You can even go through a proper, hardcopy, portfolio, have a good espresso (the man is Portuguese after all) and laugh a bit before you start your session.
“I dabble in different types of photography such as Commercial & Advertising, but fashion really is the work that gives me more pleasure, it has always been my main focus. I just love the freedom it gives you whilst at the same time giving you specific boundaries. No picture is ever the same. In fashion, it’s not just about great light and a perfect frame but also about the person. You have to know how to work with the model”, he explains shyly.
When asked about his new project, he smiles. “Well to tell you the truth I’m quite excited about it. Core Studio is the answer the local market needed, we bring good quality photography to people’s everyday lives. People always make good photographic subjects and it will be nice to bring studio photography back. In a time full of selfies, it is easy to assume anyone can take a good photo, but it is a completely different experience to have it done in a professional studio. In essence, any professional photographer is excited to be capturing moments” he told me.
In a time when Macau is learning more about its native talent, Nuno’s story is a great one because it shows just how commercially successful a small, creative business may become. When we tell him this he laughs “well… I think anything is possible with perseverance and dedication. Basically, never taking no for an answer helps, and liking what you do… well that helps even more (smiles) “