'Instagram makes you feel part of the art world—but it's a lie': artist Rachel de Joode on art and the digital 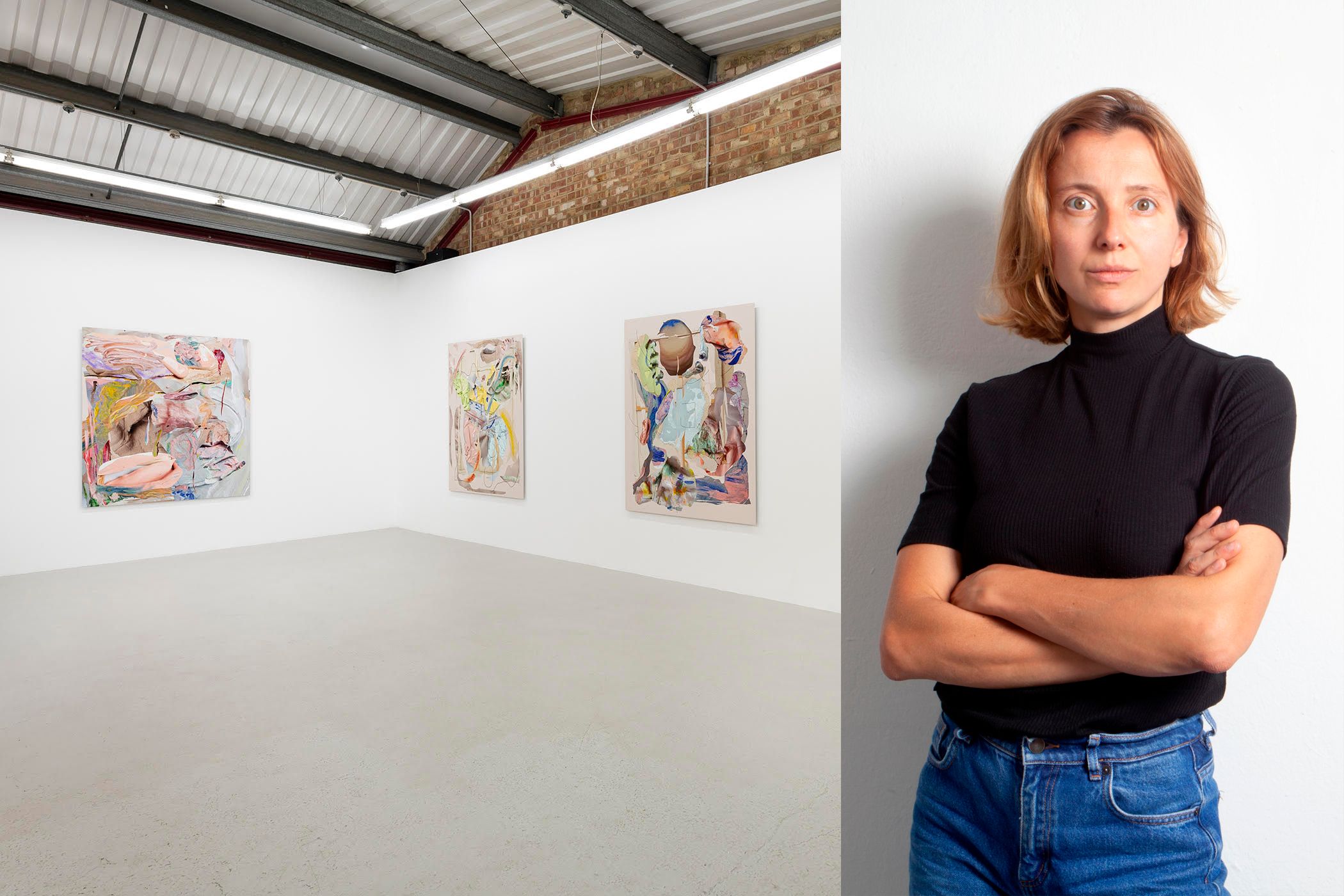 Rachel de Joode has always been fascinated by the relationship between the physical and the virtual world. The Berlin-based artist frequently mixes mediums—photography, sculpture, painting—to explore the space between three-dimensional objects and their two-dimensional representations on the screen.

But with coronavirus measures forcing a mass shift to online art over the past eight months, De Joode’s subject matter has taken on new significance. “The theme is something that is not necessarily new, but the temperature has risen during lockdown—it's like a soup, it's boiling, and the flames got higher,” De Joode tells The Art Newspaper.

De Joode’s focus on the interplay between the physical and the virtual is evident in the process behind the abstract paintings currently on show at Soft, her new exhibition at the Annka Kultys Gallery in London. First, De Joode manipulates her canvases—pouring paint, cutting, gluing and layering pigment onto them. She then photographs these canvases and uses computer software to “digitally paint” the images into abstract compositions, which are printed onto large aluminium sheets. The resulting paintings appear textured at a distance but are completely flat on closer inspection.

These paintings, part of De Joode’s Sloppy Therapy series, are a comment on how the human instinct to zoom into art on our phones is changing the way we interact with physical artwork. “Normally you would stand in front of a painting—you see the [whole] painting, and your eye cannot zoom in like you can do on your phone,” she says. “But screens reformulate our art experience. Zooming in is the standard; I constantly zoom in and the wider picture is lost”.

De Joode says that when she views art in person, she sometimes moves closer out of reflex. “Phones are almost a prosthetic for the way we look at art… we now have to move around [artwork] in order to activate the kinds of zooming in and out we could easily accomplish on a screen,” she says.

With galleries and museums shut for much of the pandemic, many people turned to Instagram as their main source of artwork. However, De Joode is sceptical about the app’s ability to introduce people to new and challenging work. “The algorithm is powered by machine learning… the more the Instagram algorithm thinks that I might like a post, the higher it will appear in my feed,” she says. “[It] is curating my ways of seeing art and it will put me in a comfortable, artificial bubble… you’re in an in a sort of algorithm loop that's just your own world.”

But what De Joode finds most interesting about Instagram is its ability to simplify and pacify. She says the app gives people a “false sense of validation”—a belief that the art they are viewing or posting is more popular than it really is. “You’re in a real simulation, you’re watching the party, you feel part of the art world, and you feel that you know what’s happening,” she says. “That’s a good feeling, bu­­t it is of course a lie… a rather soothing lie”.

The European Union Has Boosted Its Culture Bailout to €2.8 Billion After Pushback From Industry Leaders

Officials negotiated an additional €600 million for culture as part of a wider bailout that will support all 27 EU member states.

The European parliament and the European council have finally agreed on an ambitious long-term recovery plan for its 27 member nations. The historic €1.8 trillion ($2.1 trillion) agreement, which was announced on November 11, will include a provision of €2.8 billion ($3.3 billion) to support the cultural field.

Called NextGenerationEU, the final budget proposed includes an extra €600 million for European member countries to spend on culture over the next seven years, beginning in January 2021. This is a top-up on the initially proposed budget of €2.24 billion euros for Creative Europe, the parliament’s pan-continental cultural program. The additional funding for culture came after some culture officials pushed back against the initial budget proposal, as reported by Artnet News in May.

The budget must now be formally adopted by the European parliament and the council and ratified in December by member states. A 21-day negotiation period begins on November 17 between the EU government body and the national parliaments involved.

The long-term budget for Creative Europe now totals €2.8 billion, a substantial increase from the 2014-2020 budget of €1.46 billion. Germany’s culture minister, Monika Grütters, calls the updated funding for culture “good news” and “a sign of solidarity” for the cultural sector in the midst of the coronavirus crisis. “It is precisely in these difficult times that we need encouragement and confidence for culture in Europe;” Grütters said in a press statement.

Much of Europe is back in lockdown after a short reprieve this summer, including its many museums. The revised budget is a win for the culture sector after several industries fought to gain additional support from the initial  NextGenerationEU budget proposal in May.

The EU recovery package, in total, consists of a €1.8 trillion injection into the economy. The EU intends to borrow €360 billion on the market in order to help its various industries recover.

Sabine Verheyen, chairman of the committee on culture and education for the European parliament tells Artnet News that she is “delighted” that the parliament was able to succeed on securing extra funding for the Creative Europe program. It is “almost double” what was proposed by the European Parliament initially, she notes.

“The increase in funding for Creative Europe will have a huge impact on the initiatives to be funded and will directly benefit European cultural enterprises and professionals,” Verheyen says. She adds that she is also aiming for member states to be able to allocate two percent of the budget of another EU budget plan—the Recovery and Resilience Fund—to help reconstruct the cultural and creative sectors. “Member States should be encouraged to fully integrate the cultural and creative sectors into their national recovery plans,” she says.

Memes as Works of Art

Curator can haz your submissions?

Add another exhibition to your ever-expanding list of biennials and triennials to see in 2021.

Now you can tack onto your itinerary Memennial 2020: a Biennial 4 Memes, which will debut in three cities worldwide in December and pay tribute to the phenomenon that has given us doge, ceiling cat, and overly attached girlfriend.

Mirroring their near-instantaneous global spread, the show will take place simultaneously in Seattle, Dallas, and Sydney in the form of meme screenings-cum-dance parties paired with shows of physical artworks, as well as, of course, online exhibits.

The show was conceived by Dallas artist Anam Bahlam and will be curated by Soomi Han, who earned a BFA at Dallas’s Southern Methodist University this year. Bahlam invited Han to participate after seeing her “Me² Meme Art Exhibition” at SMU.

“A meme makes you laugh and gives you breath and gives you life,” Bahlam told Artnet News by phone. “Memes are free and authorless and make me think about society a little differently. So I wanted to honor these aesthetic creators.”

What’s more, through November 22, you can submit your own memes to the show. And, if you’re an analyst of the phenomenon, you can also submit your insightful commentary.

For those not up on these things, English evolutionary biologist Richard Dawkins coined the term meme in his 1976 book The Selfish Gene to introduce evolutionary principles to the analysis of the dissemination of cultural phenomena.

The term is a shortened version of the ancient Greek “mimeme,” or imitated thing, and rhymes with cream. (It is not pronounced may-may or any other way.) It has become widely used to refer to catchy, ironic text-and-image combinations that spread virally online (to Dawkins’s dismay).