Nicki Minaj called Miley Cyrus a bitch at the MTV VMAs last weekend after Cyrus had accused the rapper of being “not very polite”.

Meanwhile, a French artist and rising star called Camille Henrot has just released a series
of evocative drawings inspired by the rapper that are, in fact, decidedly polite.
Minaj may seem a shocking muse for delicate drawings that resemble a cross between Matisse (in style) and Kandinsky (in their translation of music to lines on a page). But Henrot has reworked the video Anaconda – which notoriously missed out on a VMA nomination and started a Twitter battle with Taylor Swift – into a piece of social commentary that’s set to go on show at Yarat contemporary art centre.
Minaj’s video for Anaconda pretty much broke the internet in 2014. Echoes of “she’s
taken it too far” met accusations of slut-shaming as millions watched her gyrate, greased up and scantily clad, while she decorated her bosom with whipped cream.

Henrot says: “I was struck by how radical and majestic it was. It didn’t seem particularly sexy to me. It seems more like a statement on forgetting stereotypes and embracing yourself. It is vulgar, but it is beautiful.”
Henrot received the Silver Lion award for most promising young artist at the Venice Biennale in 2013, and this foray into the realm of twerking rap stars is a decided departure from her previous work. Her most famous work, Grosse Fatigue, did reference contemporary culture (she used computer screens and Photoshopped images taken from the internet to tell the story of the universe’s creation), but it was far less overt. In her new work, the elegant line drawings inspired by the sweatiest, most sexualised scenes from Minaj’s video play with the ghosts of colonialism and racial stereotyping in contemporary culture. Henrot explains: “I like to think she created Anaconda to evoke criticism. She has abused the typical ‘black music-video girl’ archetype to the very end, to catch attention and create hate – if only so we too can realise our aversion to the sexualisation of women.” 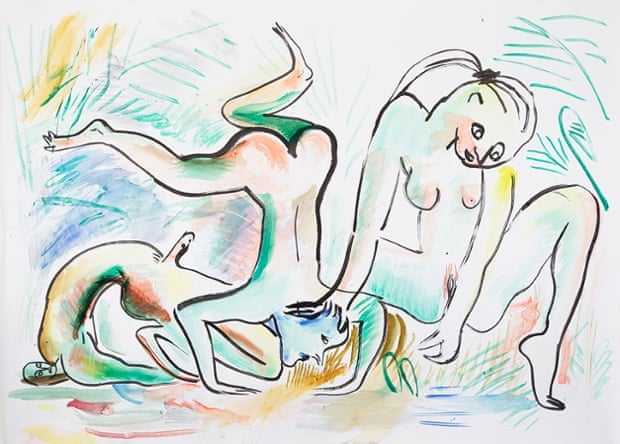 He Keep Telling Me It’s Real, 2015.
Henrot has immortalised Minaj’s message and probed it further, referencing western curiosity about the “other” – and what was once so crudely known as primitive art. “Minaj is portraying the sexuality of women, the wild woman,” says Henrot. “The dance is quite shamanistic and entrancing – she is challenging us to embrace our primal nature.” There is a freeness to Henrot’s dancing bodies that hints at the hope for a world that can embrace female sexuality without objectification or judgment. One of the drawings is called My Anaconda Don’t – a lyric repeated throughout the song. Each snaky, filigree-like ink line seems as if it’s a riff on postcolonialism, adding up to a poignant collision of high art and pop culture.
“I love the scene when she is working out in a gym in the jungle,” says Henrot, “and the ridiculousness of it all. I think she is deliberately likening herself to a Barbie, and [referencing] the fastidiousness of being plastic and fake. She’s making herself a caricature of what people want her to be.” So this is a feminist statement? “Yes, of course. Nicki Minaj is a feminist icon.” (You are the high bidder)

Always interested in referencing early masters, in this late screenprint Lichtenstein updates Picasso’s cubist portraits with his iconic Pop style. Heavily influenced by the simplified forms and color palettes in both popular advertising and comic book illustrations, Lichtenstein implements both of these essential characteristics in Art Critic. Rebelling against his Abstract Expressionist peers, the screenprint technique perfectly removes the hand of the artist, uniting print medium with artist's intent.

This work was produced as a benefit print for the Brooklyn Academy of Music (BAM), New York. Lichtenstein served on the BAM board in the mid-1980s. The funds went to the support of BAM's general programs.
Read more
Posted by Cabecilha at 3:34:00 PM No comments:

“Society puts a lot of pressure on women to have kids.”