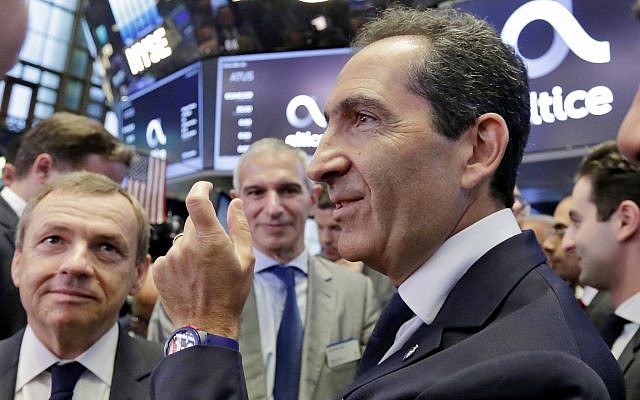 Altice founder Patrick Drahi, right, waits with company executives for the Altice IPO to begin trading, on the floor of the New York Stock Exchange, Thursday, June 22, 2017. (AP Photo/Richard Drew)
PARIS  (AFP) — French-Israeli billionaire Patrick Drahi, who is buying Sotheby’s auction house, has kept a low profile despite his sweeping international business interests.
The father-of-four is an avid art collector, and “a longtime client and lifetime admirer” of Sotheby’s, he admits.
France’s ninth-richest man, whose fortune is estimated by Forbes magazine at $9.1 billion, has multiple citizenships — French, Israeli and Portuguese — and lives in Switzerland.
Get The Times of Israel's Daily Edition by email and never miss our top storiesFREE SIGN UP
But unlike billionaire Francois Pinault, or fellow telecoms and media mogul Xavier Niel of Iliad, Drahi is not an instantly recognizable figure in France. 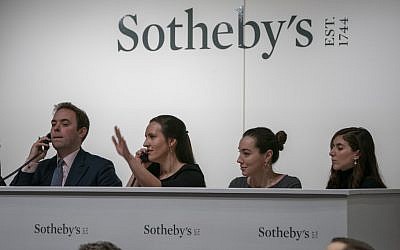 In this file photo taken on January 30, 2019 at Sotheby’s in New York, Sotheby’s employees take phone bids on an art work. (Don EMMERT / AFP)
In a 2017 profile, French news magazine Obs cited him as lauding the virtues of discretion.
“If you want to be successful, work hard, have fun and above all, listen and do not talk too much,” he was quoted as saying.
Drahi, 55, was born into a Jewish family living in the Moroccan city of Casablanca on August 20, 1963, the son of two math teachers.
He moved to France at 15 and studied at went on to study at the country’s top engineering school, the elite Ecole Polytechnique. 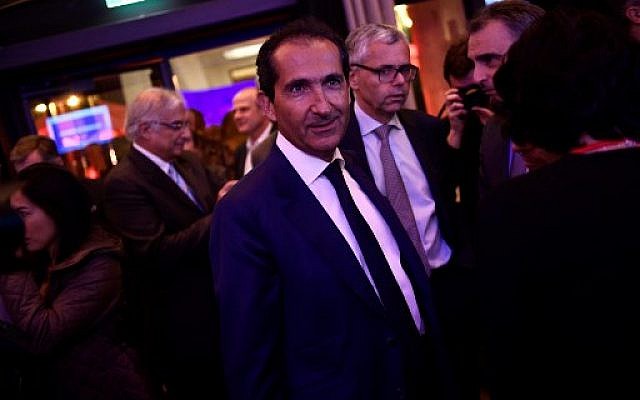 In this file photo taken on November 7, 2016 Altice CEO Patrick Drahi arrives for the launch of the new television channel BFM Paris in Paris. (Photo by MARTIN BUREAU / AFP)
After graduating he immediately began work in fiber optics and cable, beginning his career with the Philips Group and then moving to a subsidiary of cable giant Liberty Global before striking out on his own.
After buying up several troubled cable and mobile operators he entered the big league in 2014 when he fought off rival Bouygues to buy France’s second-biggest mobile phone operator SFR.
The following year he made his dramatic entry into the US market, snapping up cable company Suddenlink in a $9 billion deal in 2015, then Cablevision for $17.7 billion in 2016 and in April, the US financial video news start-up Cheddar.
Through the Netherlands-based Altice he also owns 75 percent of Numericable, France’s largest cable operator, as well as the Liberation newspaper, BFM news channel and Israel’s international i24 News network.
French unions have nicknamed him the “cost killer” but by 2017 his acquisitions had saddled Altice with around 50 billion euros in accumulated debt, sending its share price into freefall.
Promising to slow his expansion drive, Drahi returned that year as chairman of the board.
Drahi’s appetite for artwork appears to match his fortune. French online art sales database ArtPrice lists him as the 252nd biggest art collector worldwide.
“He’s a very secretive, elitist art collector… he is particularly fond of contemporary art,” ArtPrice CEO Thierry Ehrmann told AFP, adding that Drahi had in his art collection some “fairly spectacular” works by the 20th century Belarussian-French artist Marc Chagall.
A source in Drahi’s entourage said he had “encyclopedic knowledge of classical music and paintings particularly.”
“He knows when they were painted and what museum they are in,” the source told AFP.
Sotheby’s CEO Tad Smith in a statement lauded Drahi’s “commitment to innovation and ingenuity”.


For Spring-Summer 2021, Italy’s leading high-end textile and accessories show looks to the generation of digital natives for a trend forecast.

To grow up online is a unique concept: everything is available to you at the click of a button, and everything is ever-changing. For the first generation using the internet since birth, everything and nothing is new, so when imagining a future, the possibilities are endless. Perpetually connected, Gen-Z can do just about everything online: from shopping to socialising, there is a sense of community and togetherness about living URL. “Gen Z represents the sophisticated projection of 5.0 technology of the future while at the same time, on a behavioural level, it follows the same tribal dynamics of mankind since its inception” Stefano Fadda, art director of Milano Unica explains.
For the trends of SS 2021, Milano Unica has delved deep into this world, beginning with one assumption: “today’s youths find confirmation and self-confidence when they share rites, fashions, slang and passions within their group of friends. In other words, they live and are moulded by interacting with “the other members of their own tribe” writes the psychoanalyst Massimo Ammaniti.” This group dynamic allows for a setting and a following of trends through the forming of subcultures, of shared identities.

An important aspect of these shared identities is a social awareness, notably an environmental consciousness. As Ercole Botto Poala, President of Milano Unica asserts, “One can also say that Gen Z is the generation that is most aware of environmental issues, it is even the one that sparked green consciousness in the world”. The more this generation grows, and the more the eco-awareness rises, the more pressing it is for fashion, accessories and textiles to move forward into a sustainable future.
At Milano Unica’s first symposium on sustainability, a vibrant selection of guest speakers discussed this very idea. President of Milano Unica Ercole Botto Poala teamed up with Editor-in-chief of Vogue Italia and L’Uomo Vogue Emanuele Farneti, Bain & Company’s Claudia D’Arpizio, fashion critic Giusi Ferré, Pattern SpA CEO Luca Sburlati and HUNGER’s very own founder Rankin, also co-founder of Dazed & Confused and AnOther. Addressing diverse topics from consumer trends, ethics of language, the power of the media, sustainability processes and how to be ‘politically correct’ in the free expression of creativity, the panel provided much-needed insight into the future of fashion.

Uniting the future with the past, Milano Unica’s three key trends were conceived with these concepts in mind. The trends unite “5.0 technology with the aesthetic and content eccentricities of some tribes from the north to the south of the world, to determine a creative and cultural synthesis that establishes a connection between youthful aesthetics and ancestral tribal emotions, depicted within 3 symbolic landmarks, Mexico City, Los Angeles and Papua New Guinea.” These three aesthetic trends are detailed below:
TROPICAL RAVE IN MEXICO CITY mixes Mexican rituality with rave party techno tropical music. Here nature is the protagonist for prints and colours.
INDIAN CHILL OUT IN L.A. connects memories made of spices and riches from maharajahs with a passion for waves and the liberating energy of surfing. The style in this theme is decorative, sophisticated with colours of the vegan world and touches of rock ambient transgression.
BRITISH CLUBBING IN PAPUA proposes an ideal comparison between the craftsmanship of the fire people and the sartorial tradition typical of English clubs. Comfort and elegance mingle and the hybridisation between hi-tech fabrics and raw natural fibres emphasise the importance of researching materials.
Moving towards progressive new beginnings in the world of textiles, accessories and beyond, Milano Unica asks the question “Can creativity be sustainable?”, and offers solutions for how it can and will be in the very near future.

Keep up with this story and more, join our newsletter.
MORE FASHION

The TfT [The fLIPADOS Team] guide to snowflakes 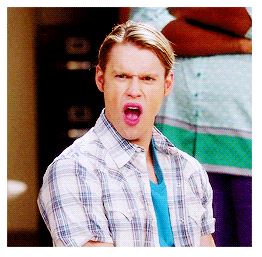 I spend my life using this term and then I have to explain it. Better make a post here with information and then I can even add some more. 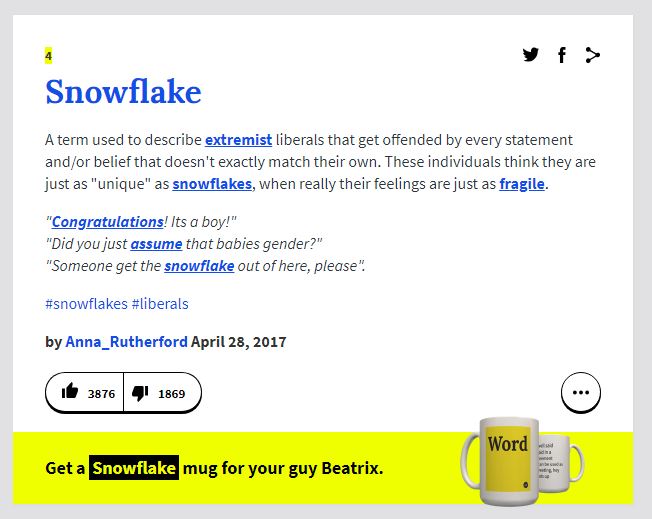 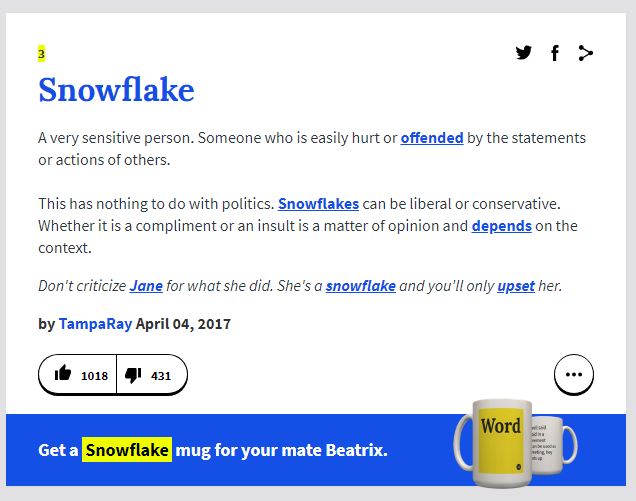 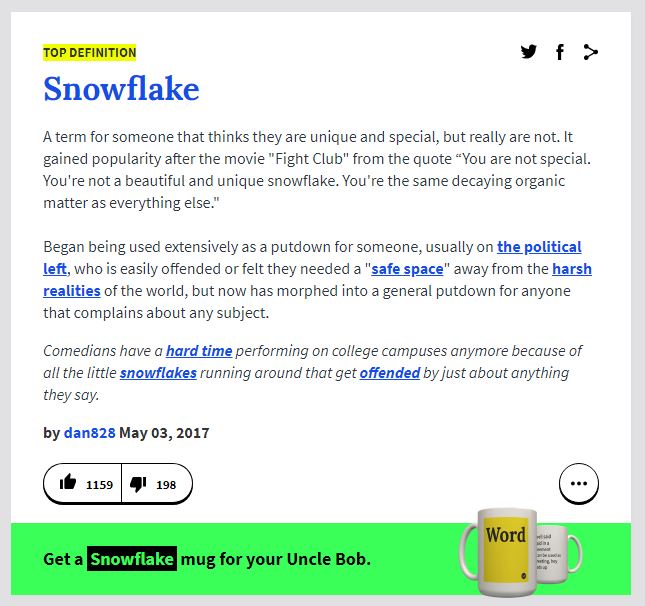 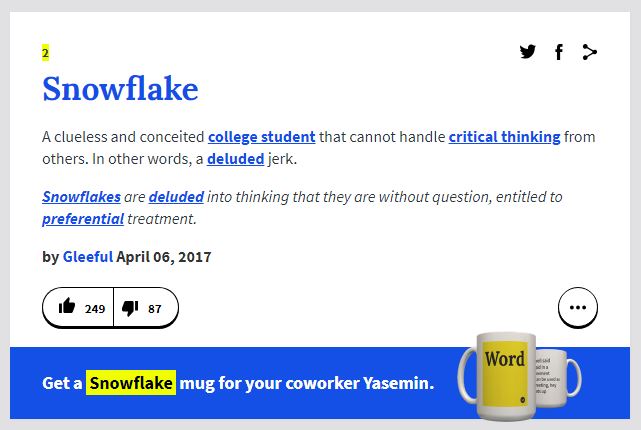 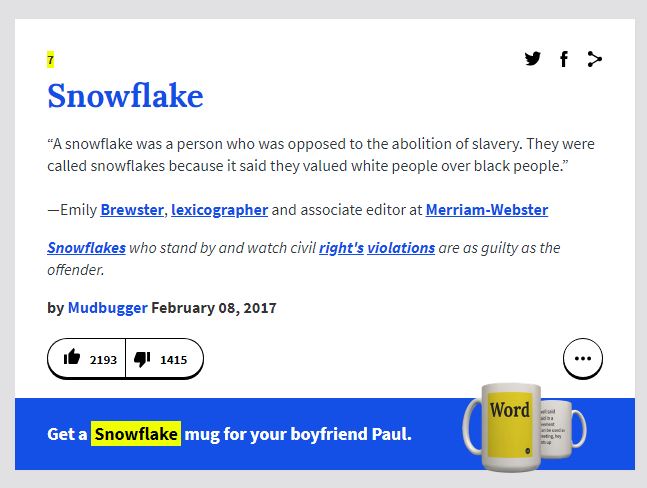 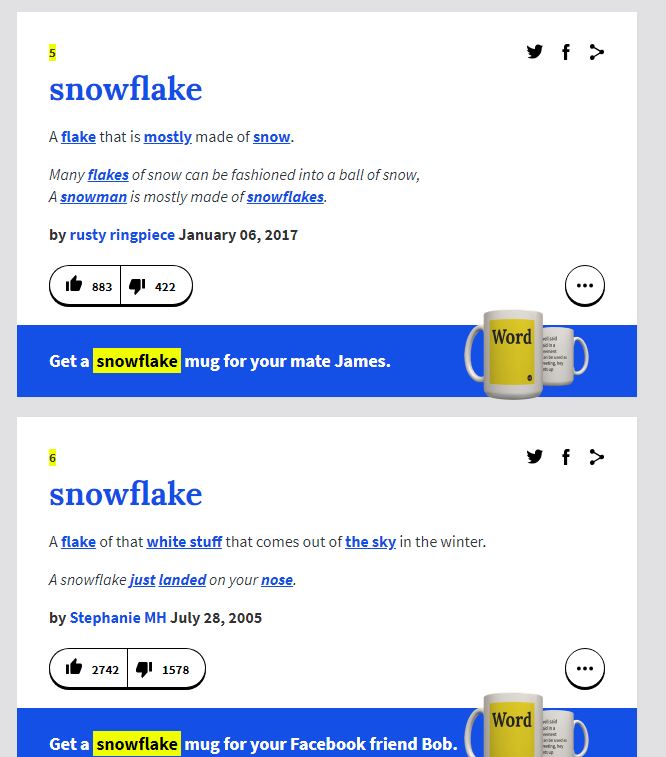 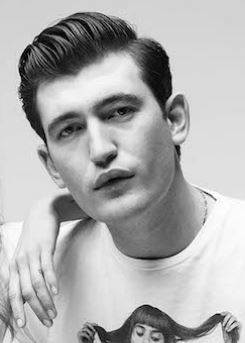 with thanx to the urban dic

BUT IF YOU THINK THIS IS JUST STREET TALK... THINK AGAIN
and check the CAMBRIDGE DICTIONARY! 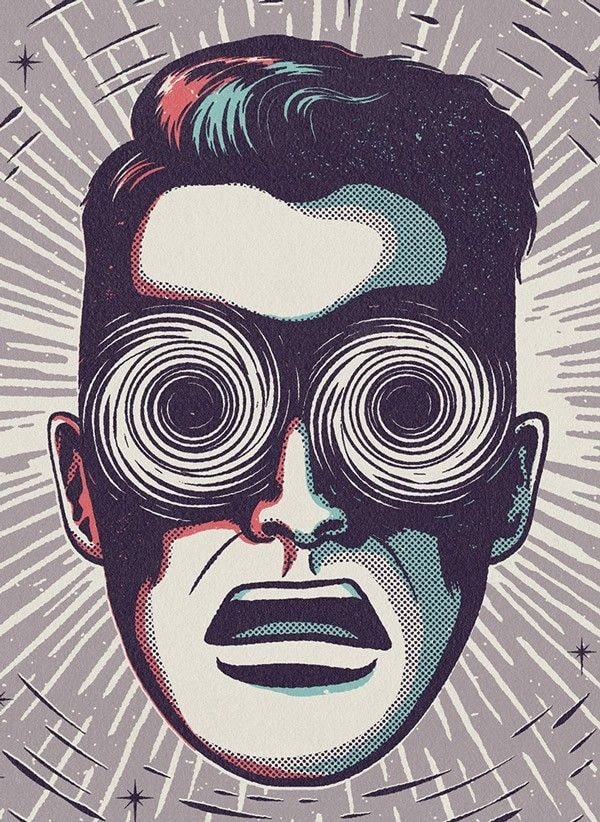 Art Basel Rules the Art Market. Is That a Good Thing for Art?

The Art Angle Podcast: Art Basel Rules the Art Market. Is That a Good Thing for Art?

In our latest podcast episode, executive editor Julia Halperin charts how Art Basel became a major cultural force—and what troubles lie ahead.
Artnet News, December 3, 2019
Welcome to the Art Angle, a podcast from Artnet News that delves into the places where the art world meets the real world, bringing each week’s biggest story down to earth. Join host Andrew Goldstein for an in-depth look at what matters most in museums, the art market, and much more with input from our own writers and editors as well as artists, curators, and other top experts in the field.
This week, what seems like the entire art industry, every luxury company, and every celebrity or status-seeker available will be traveling to south Florida for the 18th edition of Art Basel Miami Beach, the final stop on the annual art-market calendar—as well as a champagne-soaked playground for the rich and famous. And while people love to complain about this particular fair, Art Basel matters to the art business in an enormous, almost existential way.
Since its founding in 1970, Art Basel has evolved from a bespoke trade fair for German-speaking art collectors near its namesake Swiss city into a commercial Colossus linking Europe, Asia, and the Americas via three supersized fairs. Each event doesn’t only draw buyers and sellers of art who regularly transact in the millions of dollars, or even just the broader constellation of curators, journalists, and art lovers. It has also become a beacon for almost anyone hoping to ride the cultural wave that is contemporary art and its clientele, from major corporations to micro-influencers. In its wake, literally hundreds of other art fairs have risen up around the world hoping to do something similar.
But while Art Basel and its competitors have indisputably helped launch the art industry into a new era of global reach and broad cultural relevance, have they created an unhealthy, even toxic, dynamic for artists and galleries in the process? Have trade fairs warped the way we value artists and their work? And if big fairs have become a big business, why are so many starting to either branch out… or die off? Just in time for Art Basel Miami Beach 2019, Artnet News executive editor Julia Halperin joined Andrew Goldstein to weigh in on the past, present, and future of art fairs.
Listen below and subscribe to The Art Angle on Apple Podcasts, Spotify, SoundCloud, or wherever you get your podcasts. (Or catch up on past episodes here on Artnet News.)

Listen to Other Episodes: