Before The Iliad, Did Homer Write The World’s First Comedy? 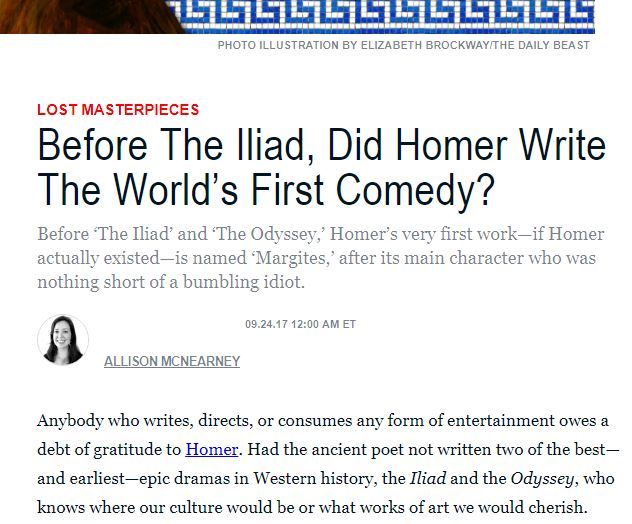 Before The Iliad, Did Homer Write The World’s First Comedy?

Before ‘The Iliad’ and ‘The Odyssey,’ Homer’s very first work—if Homer actually existed—is named ‘Margites,’ after its main character who was nothing short of a bumbling idiot. 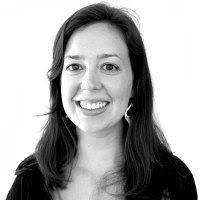 Anybody who writes, directs, or consumes any form of entertainment owes a debt of gratitude to Homer. Had the ancient poet not written two of the best—and earliest—epic dramas in Western history, the Iliad and the Odyssey, who knows where our culture would be or what works of art we would cherish.
Would Shakespeare have become the genius bard? Would Cervantes, Faulkner, and Joyce have created the diverse masterpieces that they did, all with Homeric ancestry? Would we have cinematic gems like O Brother, Where Art Thou?
It’s impossible to know because our boy Homer (or whoever he was—more on that later) pulled through and set the foundation for modern day drama and tragedy. But what would have happened if he had written the first ever comedy?
That question is a siren song for scholars, though the work of comedy often attributed to the Greek poet was lost millennia ago. But while the text of Margites may have disappeared, we’re not completely in the dark about the form Homer’s comedic style may have taken.
We know about the existence of Margites from references to it in the writings of several early philosophers and scholars, who pull no punches when it comes to describing the absurdities of the comedy’s anti-hero. Yes, the work believed to be Homer’s very first is named after its main character who was nothing short of a bumbling idiot.
In Alcibiades, Plato describes Margites as a man who “knew many things, but all badly.” Artistotle explained this ignominious descriptor further in his Nicomachean Ethics, when he wrote that “the gods taught him neither to dig nor to plough, nor any other skill; he failed in ever craft.”


In his 1891 A History of the Greek Literature, Frank Byron Jevons writes, “Being unable to count more than five, he set to work to enumerate the waves of the sea.”


RELATED IN ARTS AND CULTURE 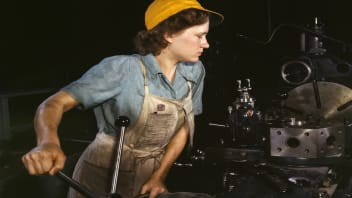 ‘The Sweat of Their Face’: Centuries of Americans at Work 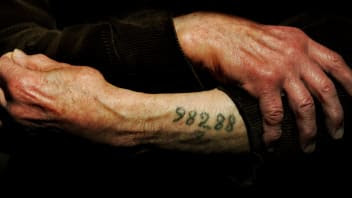 Can We Inherit Memories of the Holocaust and Other Horrors? 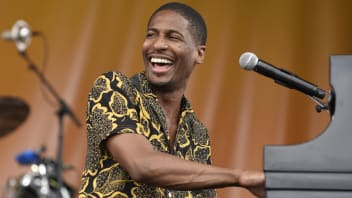 But it wasn’t just that everything Margites touched turned to failure, he also failed to grasp the basic facts of life…the birds and the bees, if you will. In a reference to the comedic epic in the writings of Aeschines, the orator gives the most damning description of the ancient fool: “Margites…a man, who, though fully grown, did not know if his mother or father had given birth to him, and who would not sleep with his wife, saying he was afraid she would give a bad account of him to his mother.”
The plot and other details of the ancient work have slipped away with the centuries, but, beyond the poor state of Margites’ intelligence, we do know a few things about the type of comedy Homer created.
Jevons writes that, “In the first place, it was not a parody; in the next, it was not a personal attack upon any one. It was general in its character, and depended for its success in provoking mirth on the humor with which the author described the situations into which Margites was naturally brought by his folly.”
So Margites was something of a proto-Don Quixote, and one can only imagine that the work would have had a similarly revolutionary impact had it survived.
Aristotle certainly thought so. In The Art of Poetry, the philosopher wrote, “Homer was the supreme poet in the serious style…he was the first to indicate the forms that comedy was to assume, for his Margites bears the same relationship to our comedies as his Iliad and Odyssey bear to our tragedies.”
While most of us learned of Homer’s powerful tales in our high school English classes, modern scholars have started to question his true identity (Shakespeare may relate).
Throughout the study of Homer, people have argued over the details of the Blind Bard’s life. Other than the location of his death (the island of Ios) and the generally agreed upon fact of his blindness, not much is known about Homer. And where there is a lack of information, questions arise as to whether the man we call Homer ever existed at all.
The question is so perplexing that there’s an official name for this line of inquiry—the “Homeric Question”—as scholars debate whether the Blind Bard was one man, multiple men, or more generally a poetic tradition that produced incredible works in something of a collective authorship rooted in oral tradition.
Most scholars previously agreed that, if Homer lived, it was during the 8th century B.C. The ancient Greeks themselves are the ones who first ascribed authorship of these works to a man named “Homer,” although they first did so over 200 years after most scholars believed that man would have lived.
In Why Homer Matters, Adam Nicholson explored another theory—that Homer wasn’t a single man (or even two men) at all. “Homer is a foundation myth, not a man nor of the natural world, but of the way of thinking by which the Greeks defined themselves, the frame of mind which made them who they were,” Nicholson writes.
He also upends the collective belief surrounding when this tradition produced its epic contributions to our culture. Nicholson contends that the creation of the Iliad and the Odyssey go as far back as 2000 B.C.
The authorship of Margites is complicated even further by theories that it may have been the work of a different Greek poet, Pigres, although this belief is not widely held and Aristotle’s attribution of the work to Homer is a strong one.
This is not only a problem that plagues Margites. Oliver Tearle wrote in The Secret Library: A Book-Lovers’ Journey Through Curiosities of History that “the precise nature of the composition of the Iliad also remains something of a mystery: the poem probably started out as part of an oral tradition and was only written down much later, but whether Homer was the blind bard of legend remains unknown—and, after nearly three millennia, unknowable.”
But whoever Homer was, the impact of his works cannot be overstated.
“To the Greeks, the Iliad and the Odyssey were not the works of a poet, but of the Poet. So impressed were the people of Argos with their inclusion in theIliad that they set up a bronze statue of Homer, and sacrificed to it daily,” Stuart Kelly wrote in The Book of Lost Books.
If only we knew how the character Alexander Pope referred to as “Dunce the First” was received.
“What could we have learned if the Margites had been spared!” Kelly wrote. “Did the Greeks laugh at or with or in a wholly different preposition? Did they yearn, in a rebuke to their entrenched sophistication, for a fool who muddled through? Did they mock the afflicted or smirk at the affected?”
Alas, this (at least) 3,000-year-old mystery about the origins of comedy is one that is destined to go unsolved.
Posted by Cabecilha at 7:07:00 PM No comments:

A Head-Spinning, Hope-Inspiring Showcase of Art 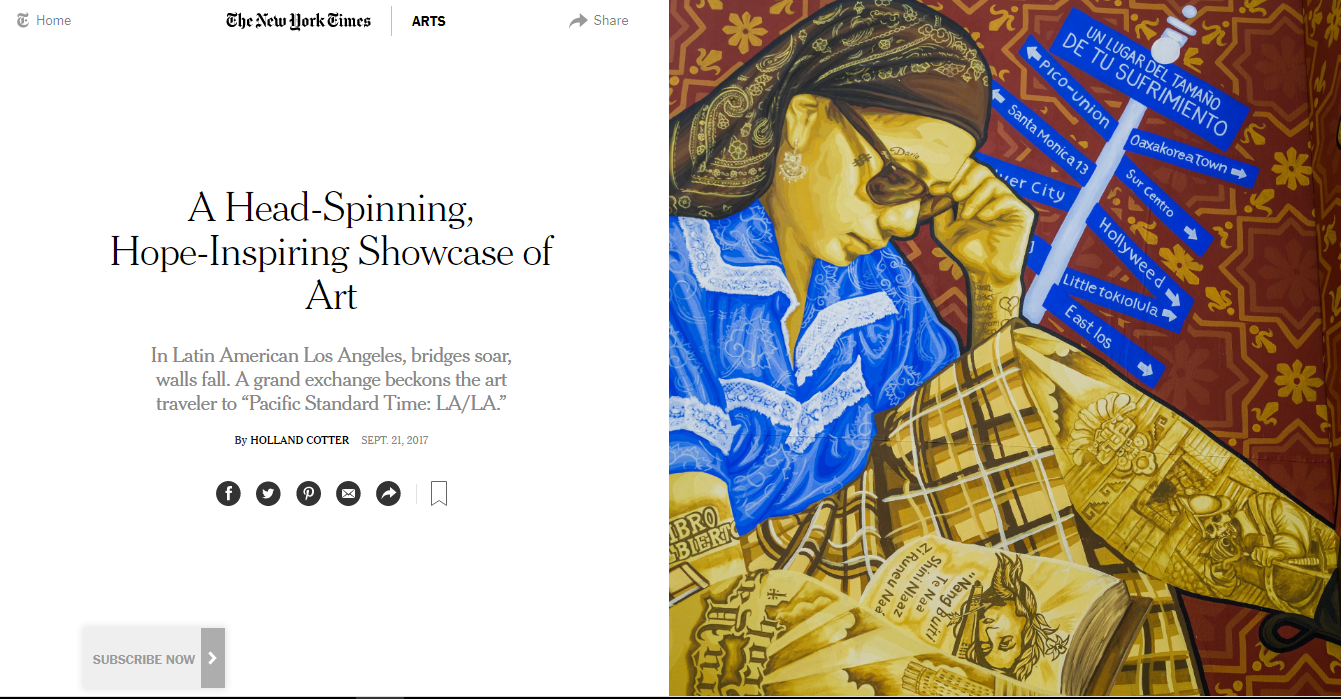 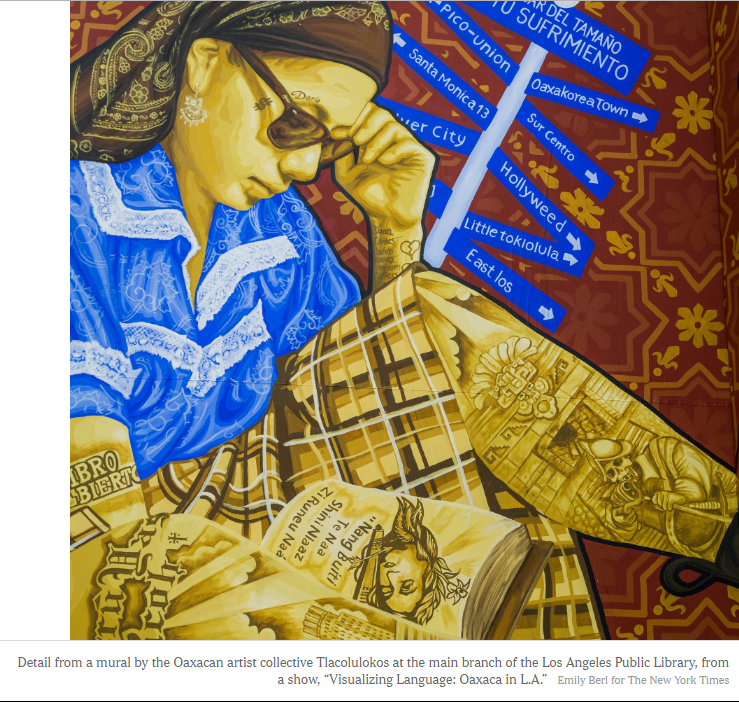