The bad behavior of visionary leaders

As I was reading Ashlee Vance’s “Elon Musk: Tesla, Space X and the Quest for a Fantastic Future,” I was alternately awed and disheartened, almost exactly the same ambivalence I felt after reading Walter Isaacson’s “Steve Jobs” and Brad Stone’s “The Everything Store: Jeff Bezos and the Age of Amazon.”
The three leaders are arguably the most extraordinary business visionaries of our times. Each of them has introduced unique products that changed – or in Mr. Musk’s case, have huge potential to change – the way we live.

Plainly, I have bought in to what these guys are selling.
What disheartens me is how little care and appreciation any of them give (or in Mr. Jobs’s case, gave) to hard-working and loyal employees, and how unnecessarily cruel and demeaning they could be to the people who helped make their dreams come true.
In fairness, the leaders all have loyal defenders. At Apple, for example, Mr. Jobs’s successors – including Tim Cook, the chief executive, and Jonathan Ive, the chief design officer – have argued that Mr. Jobs matured significantly as a leader in his final years. Mr. Musk and Mr. Bezos have senior leaders who have worked with them for many years. But even an admirer like Mr. Ive remained bewildered by the way Mr. Jobs treated people.
“He’s a very sensitive guy,” Mr. Ive told Mr. Isaacson shortly before Mr. Jobs died in 2011. “That’s one of the things that makes his antisocial behavior, his rudeness, so unconscionable. I can understand why people who are thick-skinned and unfeeling can be rude, but not sensitive people.”
Advertisement
Continue reading the main story

Given the extraordinary success of these men, the obvious question is whether being relentlessly hard on people, and even cruel, may get them to perform better.
Like their biographers, I think the answer is no. Our research at the Energy Project has shown that the more employees feel their needs are being met at work – above all, for respect and appreciation – the better they perform.
As Mr. Isaacson writes of Mr. Jobs: “Nasty was not necessary. It hindered him more than it helped him.”
Similarly, a person who worked with Mr. Musk told Mr. Vance: “He can be so gentle and loyal, and then hard on people when it isn’t necessary.”
At Amazon, Mr. Bezos’s angry outbursts came to be called “nutters.” “He was capable of hyperbole and cruelty in these moments,” Mr. Stone writes, “and over the years delivered some devastating rebukes to employees.”
Why would otherwise brilliant men behave in such destructive ways?

The first answer is that they can. Genius covers a lot of sins. A great product is a great product, and you don’t have to do everything right to be successful. Most customers don’t care how the sausage gets made, as long as it tastes good.
Employees, in turn, are willing to sacrifice a lot to work for a visionary. Much as Mr. Jobs was, Mr. Musk and Mr. Bezos are passionate, inspiring and charismatic leaders.
“Numerous people interviewed for this book decried the work hours, Musk’s blunt style and his sometimes ludicrous expectations,” Mr. Vance wrote. “Yet almost every person – even those who had been fired – still worshiped Musk and talked about him in terms usually reserved for superheroes or deities.
Finally, a certain level of financial success and the resulting power effectively excuse those who achieve it from the ordinary rules of civility and even humanity.
Mr. Jobs drove around without a license on his car, and he regularly parked in spaces reserved for the handicapped. As Mr. Ive said of his attitude, “I think he feels he has a liberty and a license to do that. The normal rules of social engagement, he feels, don’t apply to him.”
Amazon employees collected examples of Mr. Bezos’s most eviscerating put-downs, including, “Are you lazy or just incompetent?” “Why are you wasting my life?” and “I’m sorry, did I take my stupid pills today?”
When Mr. Musk’s loyal executive assistant of 12 years asked for a significant raise, he told her to take a two-week vacation while he thought about it. When she returned, he told her the relationship wasn’t going to work anymore. According to Mr. Vance, they haven’t spoken since.
Abusive as all this sounds, I would argue that most of the bad behavior of these men is fear-based, impulsive and reactive rather than consciously hurtful. It grows not out of a sense of superiority but rather of insecurity.
Some of my data, unfortunately, is my own experience. I spent most of my early adulthood relentlessly seeking to prove my worth and worrying that I would forever fall short. I have spent my recent years far more focused on trying to become a caring and encouraging leader. Even so, I know well the anxious feeling that can arise when a deal is coming undone, a project isn’t gelling or an employee seems to be falling short. I know how frightening it can be to feel out of control.
People like these three visionaries deeply crave control. Each of them was far more likely to act out suddenly and behave poorly when he wasn’t getting exactly what he wanted — when he felt that others were failing to live up to his standards.
All three invested endless hours and energy in building and running their businesses — and far less in anything else, including taking care of the people who worked for them or even understanding what doing so might look like. To a large extent, people were simply a means to an end.
I understand what it is like to have one’s self entirely tied up with external success. No amount is ever quite enough.
The question their management style raises is not whether being tough, harsh and relentlessly demanding gets people to work better. Of course it doesn’t, and certainly not sustainably. Can anyone truly doubt that people are more productive in workplaces that help them to be healthier and happier?
The more apt question is how much more these men could have enhanced thousands of people’s lives – and perhaps made them even more successful — if they had invested as much in taking care of them as they did in conceiving great products.
“Try not to become a man of success,” Albert Einstein once said, “but rather a man of value.”
Correction: June 29, 2015
An earlier version of this column misidentified the Tesla model that the author had driven. It is the Model S, not the Model X. 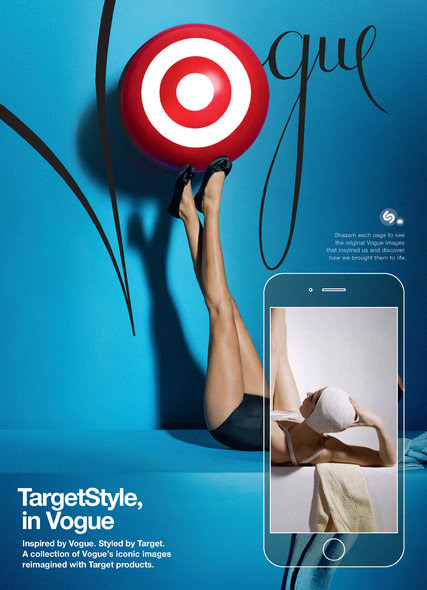 In interactive ads in the September issue, Target reimagines classic images from Vogue, dating to the early 1900s. Credit Target
Posted by Cabecilha at 6:38:00 PM No comments: