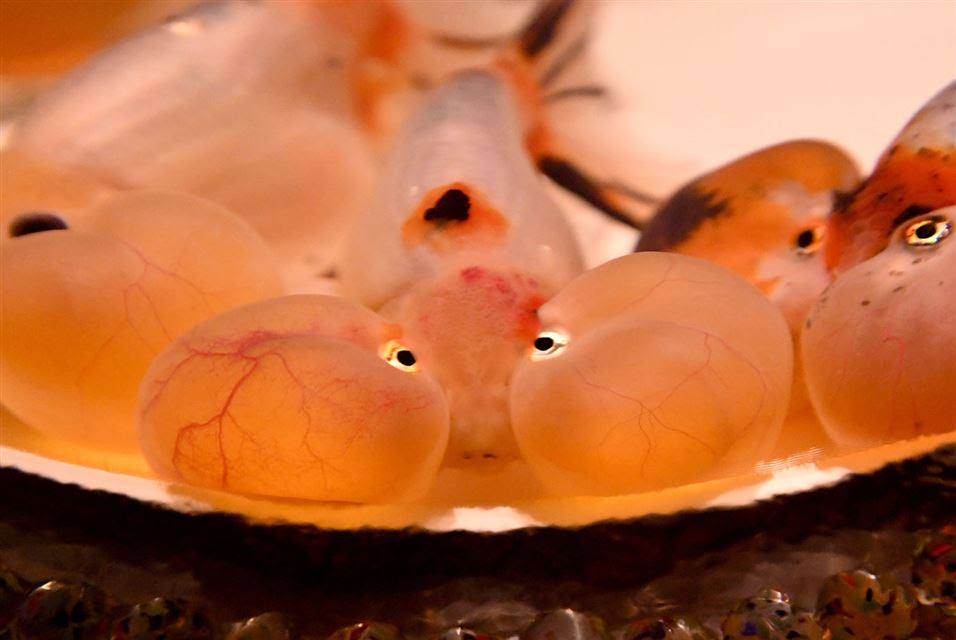 Bubble Eye goldfish swim in a fishbowl during a press preview of the 2016 EDO Nihonbashi Art Aquarium exhibition in Tokyo on July 7, 2016. The 10th anniversary of the festival will start on July 8 and will continue until September 25, displaying some 8,000 goldfish in various special art exhibits. TOSHIFUMI KITAMURA / AFP 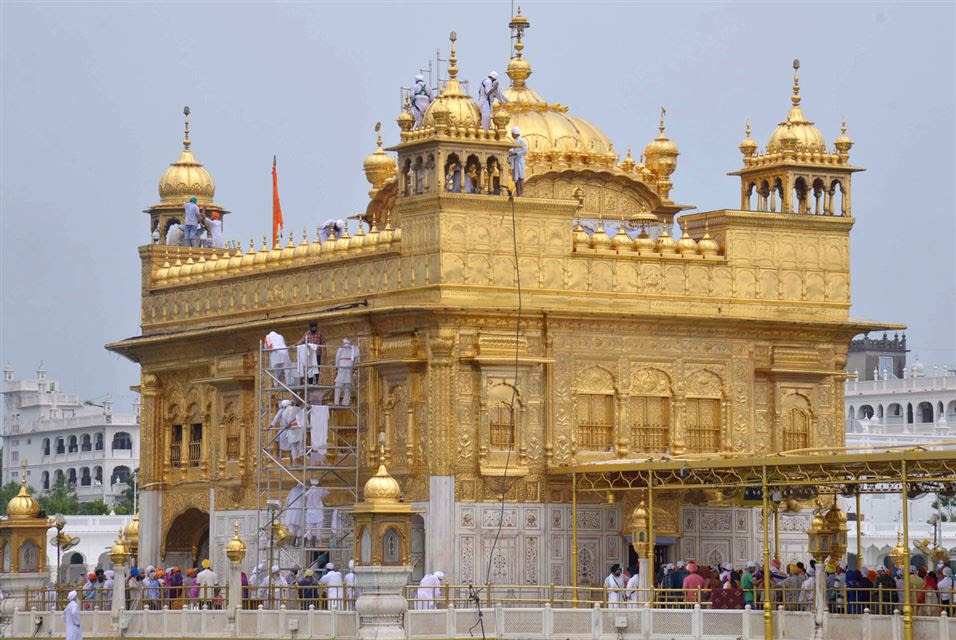 Indian Sikh devotees clean the gold plating of the Sikh Shrine Golden temple in Amritsar on August 11, 2016. NARINDER NANU / AFP
The Best Photos of the Day 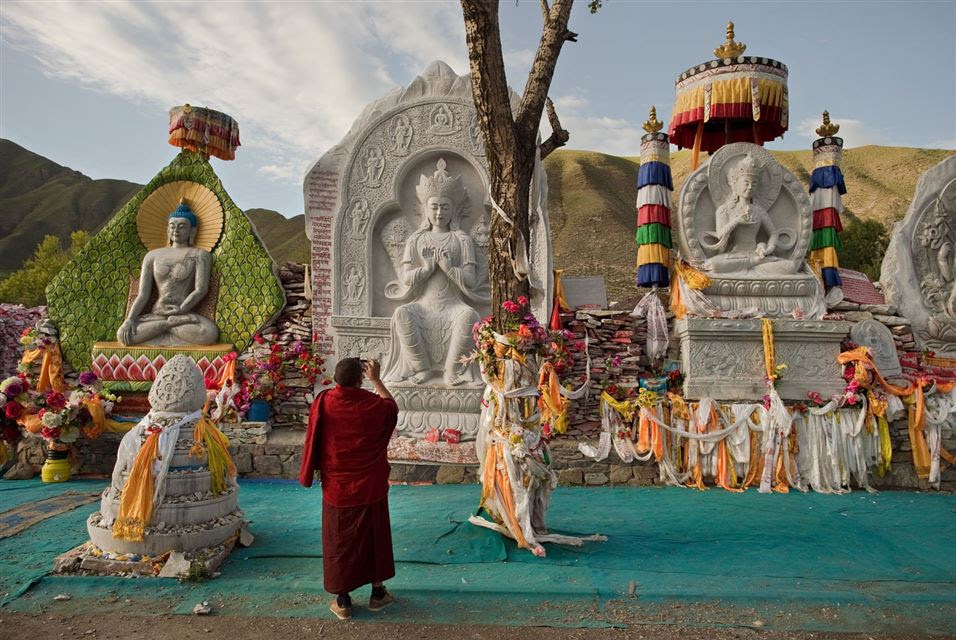 In this picture taken on July 26, 2016, a Tibetan Buddhist monk takes a picture with his smartphone at the Jiana Mani stones piles in Xinzhai village near Yushu. NICOLAS ASFOURI / AFP. 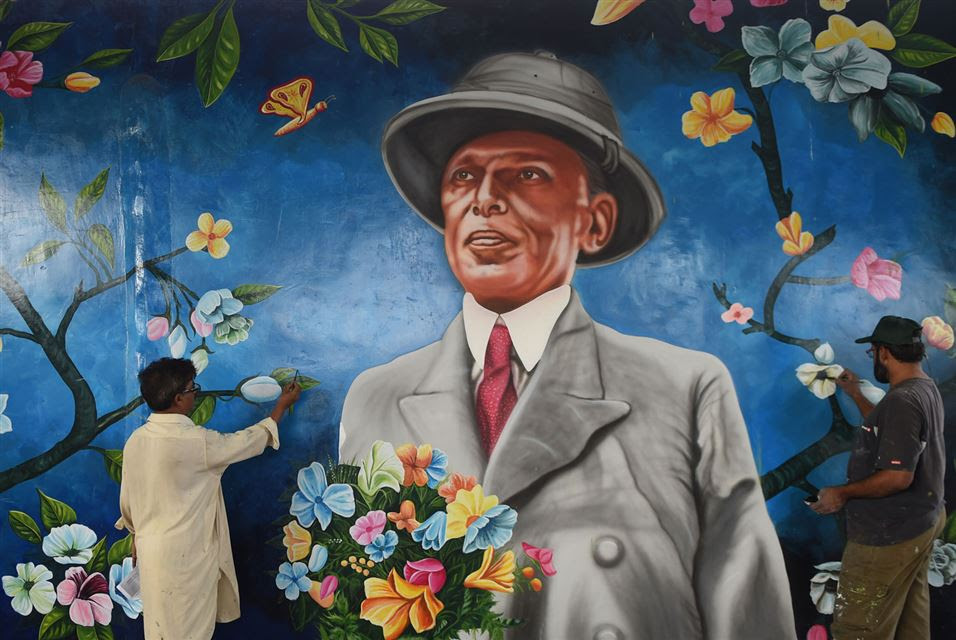 Pakistani artists give final touches to a painting with the image of Pakistan's founder Mohammad Ali Jinnah ahead of Independence Day celebrations in Karachi on August 12, 2016. Pakistan celebrates the 69th anniversary of the country's independence from British rule on August 14. ASIF HASSAN / AFP 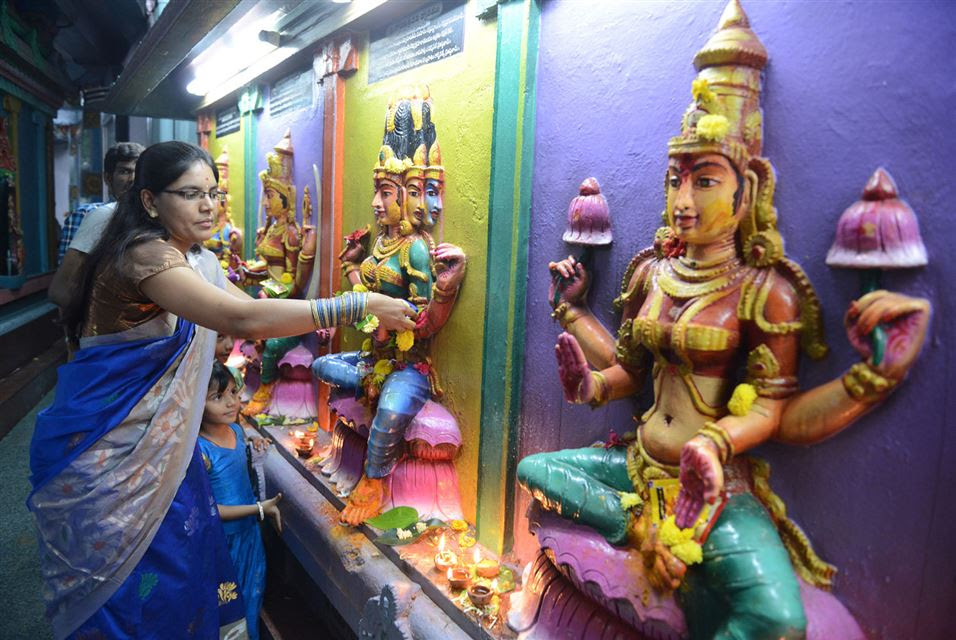 An Indian Hindu woman offers flowers and fruits to the statues after performing prayers to the Hindu Goddess Lakshmi known as " Varalakshmi Vratham" at a temple in Hyderabad on August 12, 2016. Varalakshmi Vratam is celebrated by the married women for the welfare of family members, especially husbands. NOAH SEELAM / AFP
Posted by Cabecilha at 2:43:00 PM No comments:

The paintings in the artist Ryan McGinness’s new series, “Signals,” immediately invite interpretation — and then, just as quickly, elude it. Each of the pieces is a circular wood panel, 18 inches in diameter and ringed by a thick red outline. Inside are a handful of stark, graphic black-and-white symbols (a bomb with a seedling sprouting from it; a string tied around a middle finger) that strongly evoke meaning, without giving it all away. “They use the visual language of universal sign systems and therefore give the illusion that they are communicating blunt pedestrian information,” McGinness notes, “but they undermine that same visual language by evading elucidation.”
McGinness’s particular symbology takes inspiration from the early 20th-century designs of artists like Gerd Arntz and Augustin Tschinkel, whose pictograms proved politically useful in the European radical workers’ movement after World War I. “The images that they were making were used to communicate very clear information, like statistics, and they were used on maps and legends, and it was the very beginning of an early sign system,” he says. “Once you attach utility to pictures, basically, then it becomes something entirely different.”
More recently, he cites the influence of artists like Keith Haring — and his own upbringing in the surf- and skate-heavy environment of late-’80s Virginia Beach. “I was always interested in how the application of those symbols on what are otherwise ordinary objects, like skateboards and T-shirts, really transformed the value of those things,” he says. “When I couldn’t afford the cool brands and the cool surf-shop shirts, I would just make my own, in some cases bootleg versions, or in other cases with my original artwork.” The other kind of relationship between art and commercial production compelled him, too: He had a poster of a Warhol Coke-bottle painting on the wall of his teenage bedroom.
In deciding which symbols to draw from his sizable archive of drawings when creating a “Signals” painting, McGinness says “a lot of the forms are combined and pulled together based on very basic compositional concerns, like size and visual weight.” Each of the paintings has a kind of relational, nonlinear narrative, too, but the artist is careful not to overstate them. “The images are very legible, and yet the meanings are very slippery and open to interpretation,” he says. “In many cases, I have very clear intentions, but art doesn’t necessarily operate that way.”
Below, McGinness provides shares thoughts on a few of the components of three “Signals” paintings — but preserves plenty of mystery, too. Roll over each image to see its annotations.
“Signals” is on view through Aug. 15 at the gallery at Surf Lodge, 183 Edgemere Street, Montauk, N.Y., thesurflodge.com. A book of “Signals” drawings ($75) is available at rmstore.com, produced in association with the artist’s series for agnès b. McGinness shares photos of his artistic process on Instagram.
Posted by Cabecilha at 2:34:00 PM No comments: