The Rules of Golf Postcards

To name but a few, in the golden era of postcards with golf or golfing themes there were four cartoonists who did series of cards for Raphael Tuck & Sons or Valentine. Fred Buchanan, Lance Thackeray, and Bert Thomas worked for Tuck, but the dean of golf art was a Scotsman who went by the moniker Charles Exeter Devereux Crombie.

It should go without saying that an artist’s work should be recognized even when it is unsigned and that was the case with each of these men. The experienced postcard collector should have the skill to recognize a Lance Thackeray image without regard to its topic. To illustrate this: a Thackeray card depicting a tourist in Egypt is just as recognizable as one of his Seaside views from Blackpool.

Bert Thomas, who worked for Punch magazine for thirty years, drew the same characters for all  those thirty years. His character wore the same clothes, they had the same expressions, carried on with the same antics, the only difference being the captions. Thomas was a clever cartoonist, his work imaginative, and the Punch subscribers loved him but they laughed at the same things for three decades.

A biography of Charles Crombie, on the other hand should be titled “The Father of the British Sports Cartoon.” He was born in Scotland, the third son of the renowned Scots architect James Crombie, later of the London architectural firm of Byrne and Crombie. As early as 1901, young Charles was working as a freelance artist from his home in Lambeth. He was publicizing himself as an illustrator specializing in publication illustrations, however when he was offered the opportunity to work as a postcard artist, he accepted and seldom looked back. His collection of postcards illustrating the Rules of Golf was completed in 1906 and published immediately. 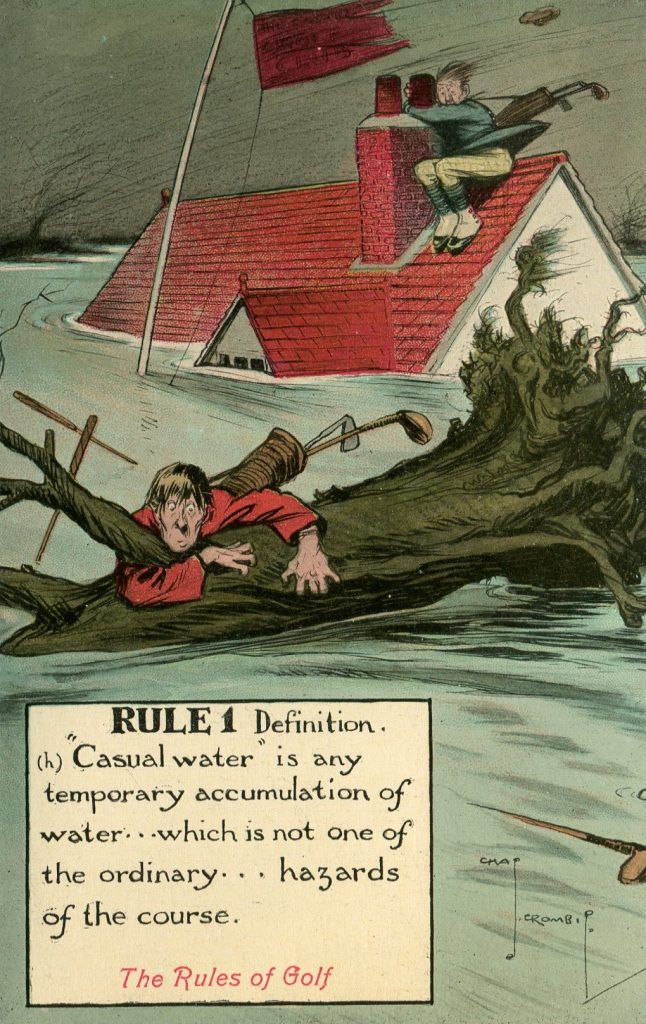 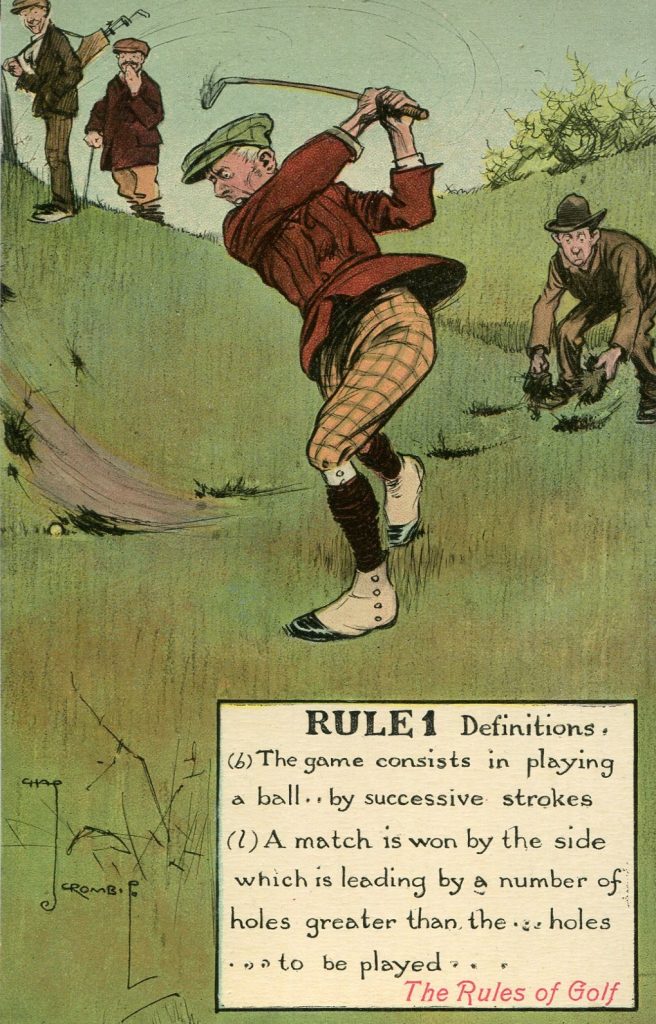 The series was an instant best-selling series. And, even now, after nearly one-hundred and twenty years, the individual cards stay highly collectible and quite rare. The cartoon characters are presented in true fashion of the era, men dressed in plus-fours, complete with jacket and tie, the women in expected attire. 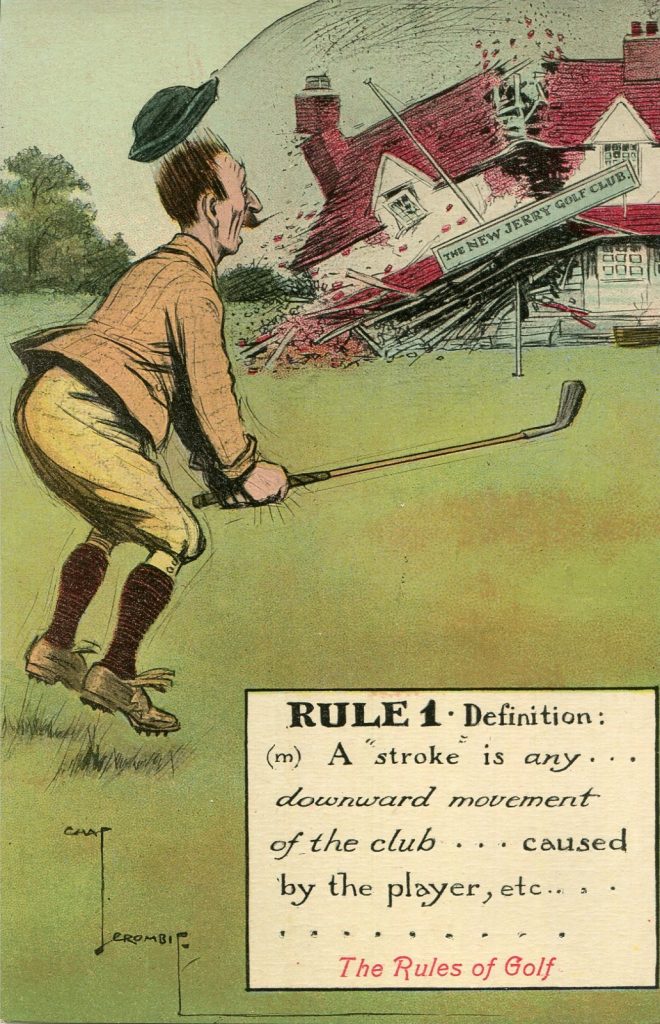 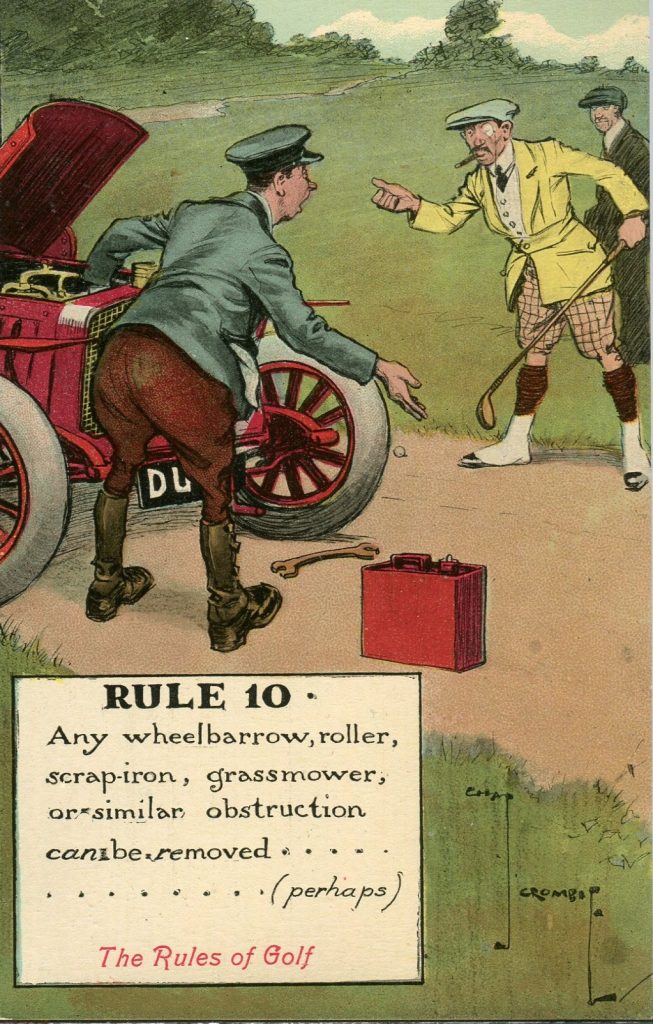 The series is divided into several sub-groups that include not only Rules, but Etiquette and topics that are frequently called, in the sport’s lingo, “Local Rules” which govern situations unique to a particular course. 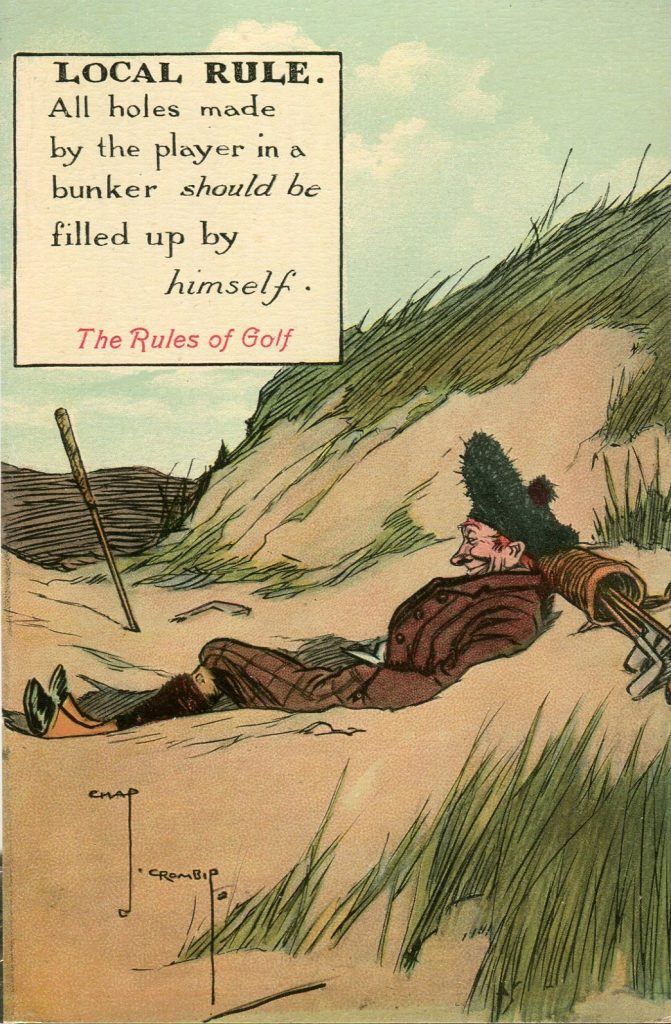 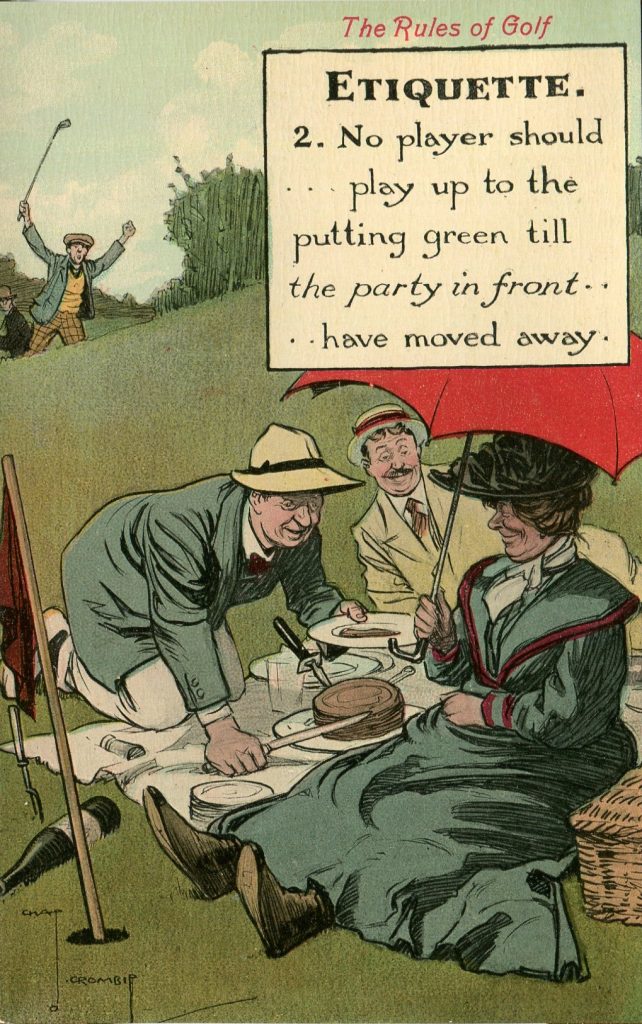 Crombie’s commercial success was enormous. His art was sold just as often as frameable prints as it did as postcards. Other sports themed art of his creation included the rules of cricket, a series that was equally successful.

Charles married in 1907 and by 1911 he and his wife Helena were living at Hogarth House, an upscale London address where their daughter Irene was born in 1914. While at Hogarth House they were neighbors of the famed English writer Virginia Woolf, who then was considered one of the most influential literary minds of the twentieth century.

Crombie continued to work well into the 1920s and ‘30s in both the United Kingdom and the United States. He spent considerable time at Dodd Mead in New York City where he illustrated nearly a dozen of Wodehouse’s Jeeves short stories.

In the mid-1920s Crombie returned to the UK and took a position at The Strand Magazine, a British monthly magazine founded by George Newnes composed of short fiction and general interest articles.

Charles Crombie died at Hertfordshire in 1967.

Ray Hahn is a retired educator, but he has never stopped teaching. His decades of researching, writing and editing a newsletter for the South Jersey Postcard Club has been a world-class education in trivia. In addition to postcard collecting, Ray’s other interests include history, genealogy, and touring the world with his wife Marie. Ray often advises his readers to "Join me as we explore the world one postcard at a time." Ray and Marie live in New Jersey.
PrevPREVIOUSThe Common States of Nudity – a Gallery of Beauty, Humor, Joy, and Love
NEXTMount Lowe Railway – The “Railway in the Clouds”Next
1 COMMENT
Oldest
Andrew Cunningham

Great article. Those are wonderful cards and illustrations.