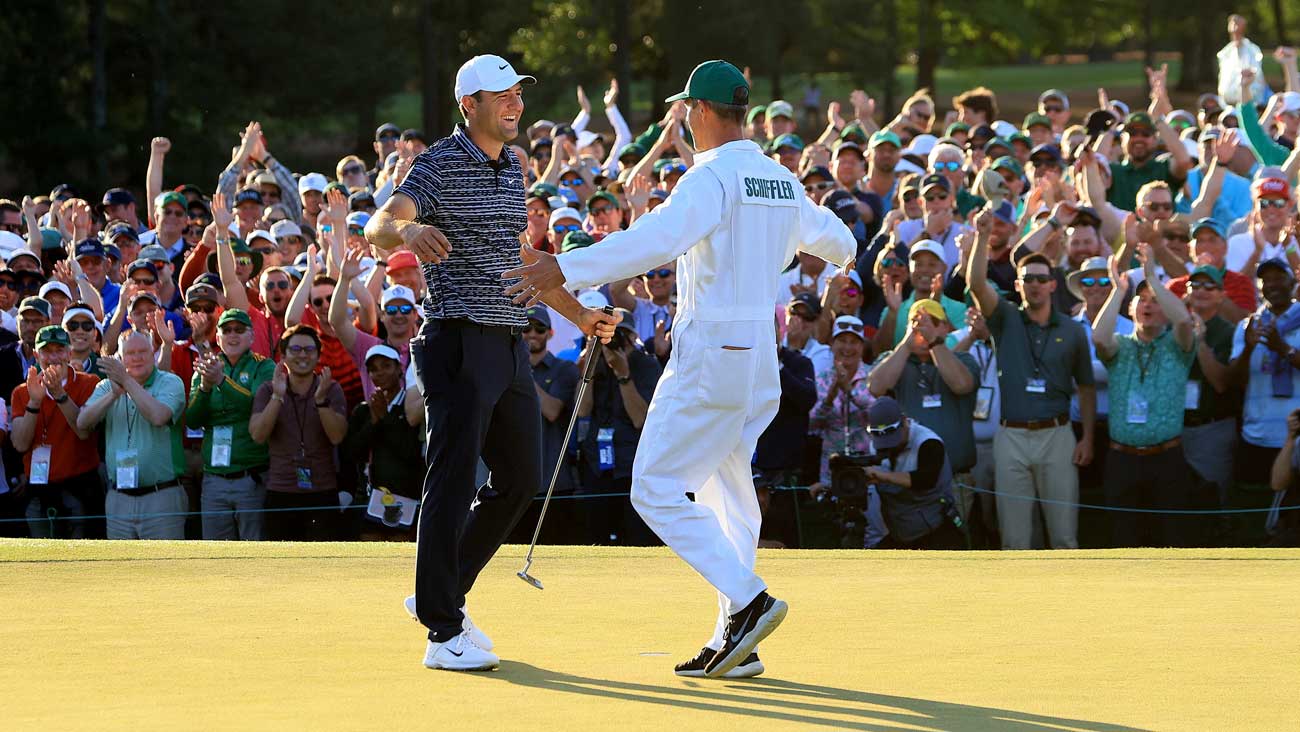 AUGUSTA, Ga. — He just never gave anyone else a chance.

Scottie Scheffler continued his marvelous run of golf on Sunday at Augusta National, making key par saves when he needed to, chipping in for birdie when he wasn’t expected to and keeping one sleeve in that coveted green jacket all round long.

Scheffler, who opened the day with a three-stroke lead over Australian Cameron Smith, closed with a one-under 71 to win the 86th Masters and claim his first major title. He finished 10 under overall, three clear of Rory McIlroy, who shot up the leaderboard by tying a final-round record with 64.

Sunday at the Masters was a final pairing that featured two of the game’s hottest players. Scheffler entered with three wins in his last five starts, and the most recent, at the WGC-Dell Technologies Match Play, elevated him to No. 1 in the world.

Meanwhile, Smith, 28, had victories in two of his last four PGA Tour starts and was coming off a win at the Players Championship, the biggest of his career and one that moved him to No. 6 in the world.

But despite his three-shot lead heading into Sunday, Scheffler couldn’t shed the nerves, even if the public didn’t notice. He said he “cried like a baby” on Sunday morning.

“I was so stressed out. I didn’t know what to do. I was sitting there telling [my wife] Meredith, I don’t think I’m ready for this. I’m not ready, I don’t feel like I’m ready for this kind of stuff, and I just felt overwhelmed,” he said. “She told me, Who are you to say that you are not ready? Who am I to say that I know what’s best for my life? And so what we talked about is that God is in control and that the Lord is leading me; and if today is my time, it’s my time. And if I shot 82 today, you know, somehow I was going to use it for His glory. Gosh, it was a long morning. It was long.”

Scheffler said he didn’t calm down until he ate a little more food and got to the course. Asked why he felt that way this morning, he said: “Because it’s the Masters.”

Fast forward to Sunday afternoon, and it was a two-man race, maybe three, if you thought Sungjae Im, who started the day five back, had a chance.

But then came McIlroy.

The World No. 9 hasn’t won a major since he picked off the Open Championship and PGA Championship back-to-back in 2014 to claim his third and fourth, and he only needs an elusive Masters title to become the sixth player to complete the career grand slam.

He started Sunday 10 shots off the lead but made birdies on 1, 3, 7 and 8 to turn in 32. He chipped in for birdie on 10 and added an eagle on the par-5 13th to get to seven under on his round, which not only caught the attention of the final pairing but started chatter of him threatening the Masters course record of 10-under 63. The eagle on 13 got McIlroy to six under overall, one back of Smith and five back of Scheffler, as they played the 9th hole.

McIlroy teed off 50 minutes before the final pairing. When Scheffler and Smith took the tee, at 2:40 p.m. local, it was Smith who had the early advantage.

He made birdies on 1 and 2 to cut Scheffler’s lead to one, but both players got in trouble on the short par-4 3rd hole, and it was a major turning point. Both went well left of the fairway and hit their approaches short of the green, landing in nearly identical spots. But Scheffler chipped his in for an unlikely birdie, and Smith couldn’t get up and down and made bogey. The lead was back to three.

“After that I kind of just started cruising,” Scheffler said. “I felt comfortable with pretty much most of the aspects of my game. My swing maybe felt a little bit off, but other than that, I feel like I wasn’t ever really going to make a bogey. That was my goal. I just tried to hit good shots, and that’s really all I was thinking about.”

Smith also bogeyed the fourth, and both players made birdie on 7. At the turn, with a treacherous run through Amen Corner awaiting, Scheffler led at 11 under, with Smith at seven under and McIlroy at six under. No one else had a chance.

Scheffler and Smith both ran into trouble on 10 and made bogeys, although Smith’s was more prone to sting — he badly missed a four-footer from above the hole, giving up a chance to gain a stroke back after Scheffler had finished out.

McIlroy, at six under, needed to take advantage of the final par-5, the 15th, to have a good shot at catching Scheffler, but a bad drive forced him to punch out — eliminating any chance of going for it in two — and he missed the green with his approach. He failed to chip in for birdie and settled for a disappointing par, remaining four back.

Smith rebounded with a birdie on 11 and Scheffler rolled in a key par save from seven feet to keep his lead at three as they moved to the short par-3 12th, the same hole that ruined Jordan Spieth’s Masters chances back in 2016.

But this time it was the chaser — Smith — who was derailed by Rae’s Creek.

Smith plunked his tee shot into the water and air-mailed a wedge over the green after his drop. He made triple bogey.

“Yeah, it was a terrible swing,” said Smith, who shot 73 and tied for third along with Shane Lowry, five back of Scheffler.

Scheffler missed the green well left on 12, but he rolled in a clutch nine-footer to save par again.

“Nothing is safe out there on the back nine on this golf course,” Scheffler said. “I’ve heard all the things that everybody says, it doesn’t start until the back nine on Sunday, anything can happen, don’t hit in the water on 12, all the stuff. You know, I just blocked most of that out and tried to execute and hit good golf shots.”

Scheffler stayed at 10 under, four clear of McIlroy and six ahead of Smith.

And then? McIlroy had one last charge. After four straight pars, he went from the fairway bunker to the greenside bunker on the 18th — then holed it for birdie. The patrons — and McIlroy — went ballistic.

“I’ve said all week, it’s just about hanging around,” McIlroy said. “That’s what this tournament is all about, hang around until you get to a spot where you feel comfortable to be aggressive, and that was where I was today.”

McIlroy shot 64, one off tying a tournament record, to set the clubhouse lead at seven under. Scheffler, who had just missed his birdie putt on 13 but saved par, had five holes remaining and a three-shot lead.

Pressure? No, not at all. At least, not until the final green.

Scheffler made birdie on 14 and 15. He two-putted for par on 16 and left just a kick-in for par on 17. When he walked up the fairway on the 72nd hole, leading the biggest golf tournament in the world by nearly half a dozen shots, he fought back tears. His wife, Meredith, let them flow. His only blemish this week? A bizarre four-putt double bogey on the 18th. At that point, it hardly mattered.

It wasn’t supposed to be this easy, his first Masters win in just his third visit to Augusta National. Perhaps it wasn’t. He just made it look that way.

Scottie Scheffler, the hottest golfer in the world, proved he belongs at the top of the World Golf Rankings and now the Masters leaderboard. Sean Zak and James Colgan discuss Scheffler's win, Rory shooting 64 on Sunday, and Tiger Woods' return.

Get your daily dose of news, instruction tips, and more.

In one magical round, Rory McIlroy rejuvenated his grand slam hopes once again

Why is Ted Scott caddying for Scottie Scheffler? You better grab a tissue.

Josh Berhow is the managing editor at GOLF.com. The Minnesota native graduated with a journalism degree from Minnesota State University in Mankato. You can reach him at joshua_berhow@golf.com.