The Man Helping Dubai Pivot from Oil to Art

Art Market
The Man Helping Dubai Pivot from Oil to Art
By Coline Milliard
The words “kind” and “humble” crop up frequently when people are asked to describe Abdelmonem Bin Eisa Alserkal, the property developer and patron behind Dubai’s gallery district, Alserkal Avenue. It’s unusual enough to be noted: Behind closed doors, the super-rich and the powerful are not always treated so generously. But Alserkal cuts an atypical figure in a notoriously snooty art world.
Alserkal’s gentle demeanor and consistent support have no doubt contributed to the success of Alserkal Avenue, now one of the most talked about cultural hubs in the United Arab Emirates (UAE). During my trip, an Avenue employee confided over coffee that working for someone so “kind” made them all work harder. And although “Community” is a much bandied about concept these days (particularly by “placemakers” keen to add human cache to their investments), anyone spending time with staff and gallery owners at the Avenue, would notice that a genuine community of creatives has found a home here.

The Birth of a Creative Hub

Alserkal Avenue started in 2007 as a warehousing business on the site of a former marble factory, owned by the Alserkal family in the industrial area of Al Quoz, a roughly twenty minutes drive south of downtown Dubai. A year later, Ayyam Gallery, the brainchild of cousins Khaled and Hisham Samawi who founded it in Damascus in 2006, moved in, attracted by the vast spaces the Avenue offered. Carbon 12, Green Art Gallery, Isabelle van den Eynde, and Lawrie Shabibi quickly followed suit.
While Abu Dhabi and its recently opened Louvre outpost on Saadiyat Island is working hard to become a world-class museum destination, Dubai is all about business. In the art world, the city is known as the center of the region’s art market and Alserkal Avenue has the largest concentration of commercial galleries in town. 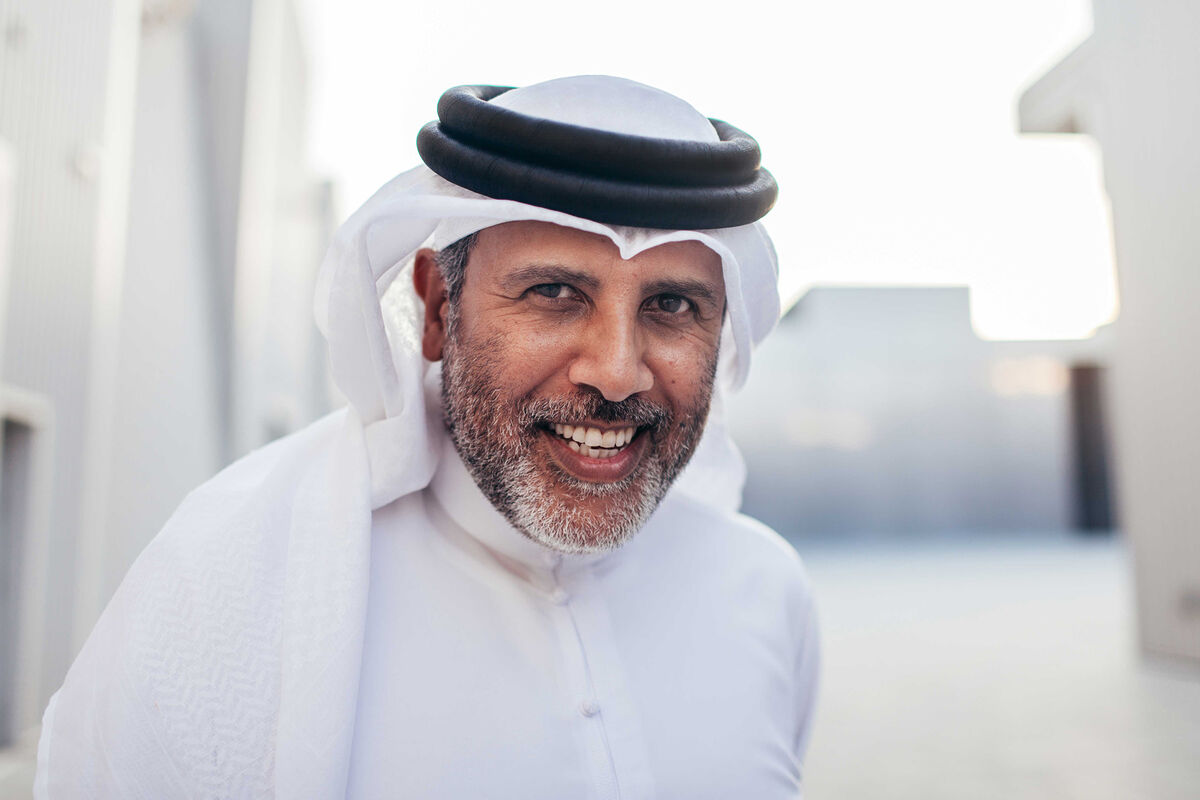 Portrait of Abdelmonem Bin Eisa Alserkal standing outside of the OMA-designed space, Concrete, on Alserkal Avenue, Dubai, by Anna Maria Nielsen for Artsy.
As recently as the early 2000s, the neighborhood was barely on Dubaians’ map. Even on my first visit to Dubai in 2013, taxi drivers had no clue where Alserkal Avenue was. “You never had any reason to go there,” said Art Dubai director Myrna Ayad, thinking back on the Al Quoz of her childhood. “There was nothing for you to do.” Once a small art community took root, however, the neighborhood began to grow organically.
“We really encouraged our colleagues to move here,” said Nadine Knotzer, the founding co-director of Carbon 12, who rented a space on the Avenue in 2009. “[Back then] there was no one coming here saying: ‘great, this is going to be galleries;’ Alserkal was not in the picture.”
As a critical mass of galleries accumulated, Alserkal recognized the potential to more actively build an incubator for Dubai’s fledgling cultural sector. “I thought: ‘why not have more of a destination, or a community, of art galleries and creative businesses’,” he said when we met at the Avenue in November. What had started organically soon became a carefully planned ecosystem. And the growth of the district since has been remarkable.
On my first visit, in 2012, I remember finding the rows of identical, metal-clad warehouses a little daunting—and rather deserted. Fast forward five years, and Alserkal Avenue is almost as well identified as Dubai’s 163-storey skyscraper, the Burj Khalifa. It currently hosts 16 galleries—including heavyweights Leila Heller and The Third Line—and over 40 creative businesses ranging from design shops to chocolate makers. Private museums have also sprung up, among them the Salsali Private Museum and the Jean-Paul Najar Foundation. On any day, its cafés are teeming with youngsters fiddling with Apple devices or lounging on hanging chairs among potted plants. The number of visitors in any of the galleries I went to during my last trip, while modest, wouldn’t feel odd in New York or London.

“I thought, ‘Why not have more of a destination, or a community, of art galleries and creative businesses’.”

The visual arts have always had a place in Alserkal’s life. As a child, he relished his father’s collection of books on Islamic art and Western masterpieces. He remembers fondly studying pictures of illuminated manuscripts before he even learned to read. It was perhaps inevitable that a businessman so deeply immersed in culture would soon become a fully-fledged patron of the arts.
Alserkal now sits on the boards of Middle Eastern acquisition committees in some of the world’s most prestigious institutions, including the British Museum, Tate, and the Guggenheim. But first and foremost, he is a patron at home. Two years ago, the Avenue launched its own non-profit branch, Alserkal Programming, a division in charge of organizing regular talks, screenings, and an extensive cycle of artists’ commissions, most of which are located in the Avenue’s public spaces. 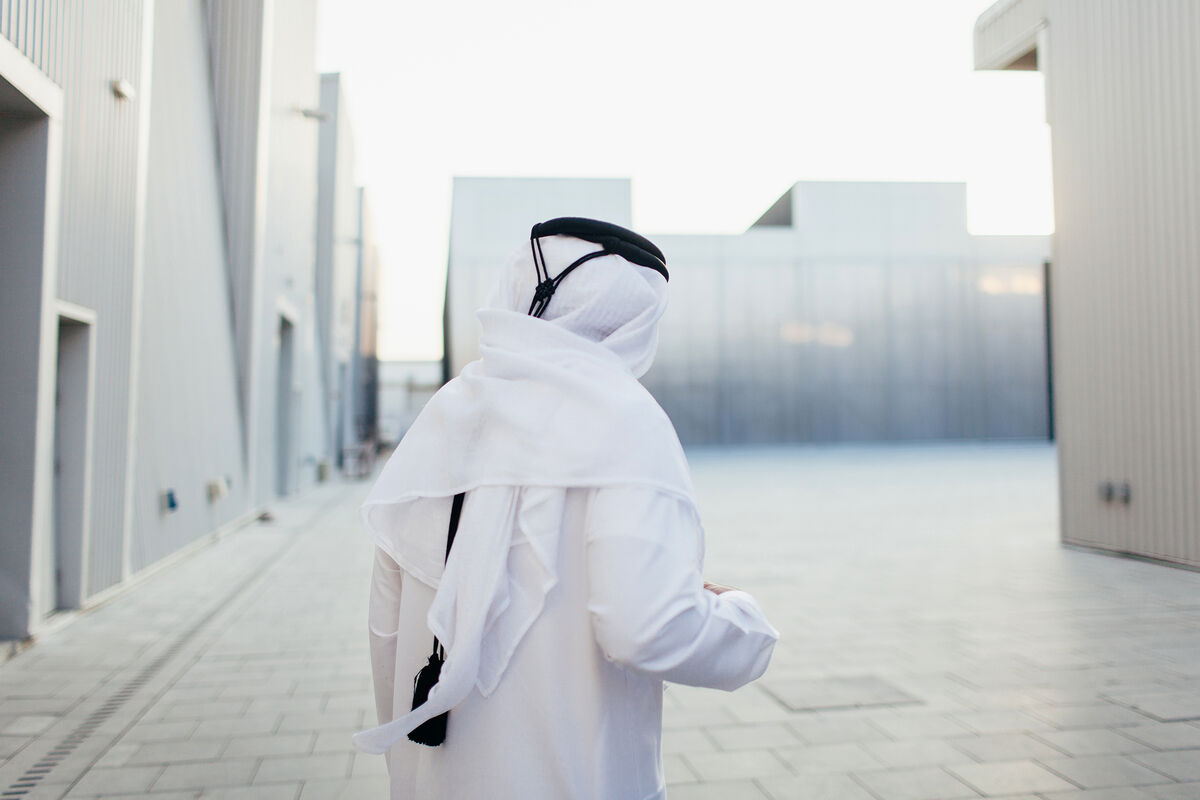 Portrait of Abdelmonem Bin Eisa Alserkal standing outside of the OMA-designed space, Concrete, on Alserkal Avenue, Dubai, by Anna Maria Nielsen for Artsy.
Concrete, a multi-purpose, 600 square-meter cuboid venue commissioned from Rem Koolhaas’s practice OMA, is perhaps the flashiest addition to Alserkal Avenue to date. It was unveiled earlier this year, and functions as a focal point for the whole complex. The starchitect’s first project in the UAE, the structure recently hosted a remarkable show by AAU ANASTAS, the studio consisting of Palestinian architects-cum-designers Elias and Yousef Anastas.
Titled “While We Wait,” the exhibition investigated the possibility of erecting a meditation space combining innovative stone design and evoking the vernacular architecture in the Cremisan Valley, a lush patch of land wedged between the West Bank and Jerusalem. The project was initially commissioned by the Victoria and Albert Museum and marks the Avenue’s first collaboration with the London institution. An ambitious, research-driven residency, as well as an internship program for UAE-based young professionals to work at the Peggy Guggenheim Collection in Venice, are among the Avenue’s other recent non-profit additions.

A Land of Contrasts

Dubai, and the UAE at large, is a land of contrasts. Many of the young people I talked to there are adamant that, while the old world is in decline, opportunities are plentiful in the UAE. In a drive to diversify the country’s oil-dependent economy (perhaps accelerated by the crude market’s volatility during the last few years), the rulers have turned towards tourism, investing seemingly bottomless resources into the development of Abu Dhabi’s Saadiyat Island. The recent acquisition of Leonardo da Vinci’s record breaking $450 million Salvator Mundi is the latest addition to the island, where it will be on view at the newly-opened Louvre Abu Dhabi.
Innovation is quickly becoming the UAE’s other trademark. Ministers for Artificial Intelligence, Happiness, Tolerance, the Future, and Youth were recently appointed. The latter post is currently held by Shamma bint Suhail bin Faris Al Mazrui, who was nominated in 2016, aged 22, and became the world’s youngest government minister. Preparations for a Museum of the Future showcasing speculative design prototypes are also well underway. The emirate is also in the midst of a feasibility study for a Hyperloop, a futuristic train first imagined by Elon Musk, which, within five years, could take passengers from Dubai to Abu Dhabi in 12 minutes at 745 mph.
Yet, no matter how forward thinking, the UAE remains an absolute monarchy, where the life of the mainly Southeast Asian lower class is a far cry from the glitzy hotels and fast cars Dubai is associated with. The formation of political parties is illegal and, in keeping with Sharia law, homosexuality and abortion (with few exceptions) are forbidden. The freedom of the press has also been repeatedly challenged, as demonstrated recently by the detention of two Swiss journalists reporting on the opening of the Louvre Abu Dhabi. 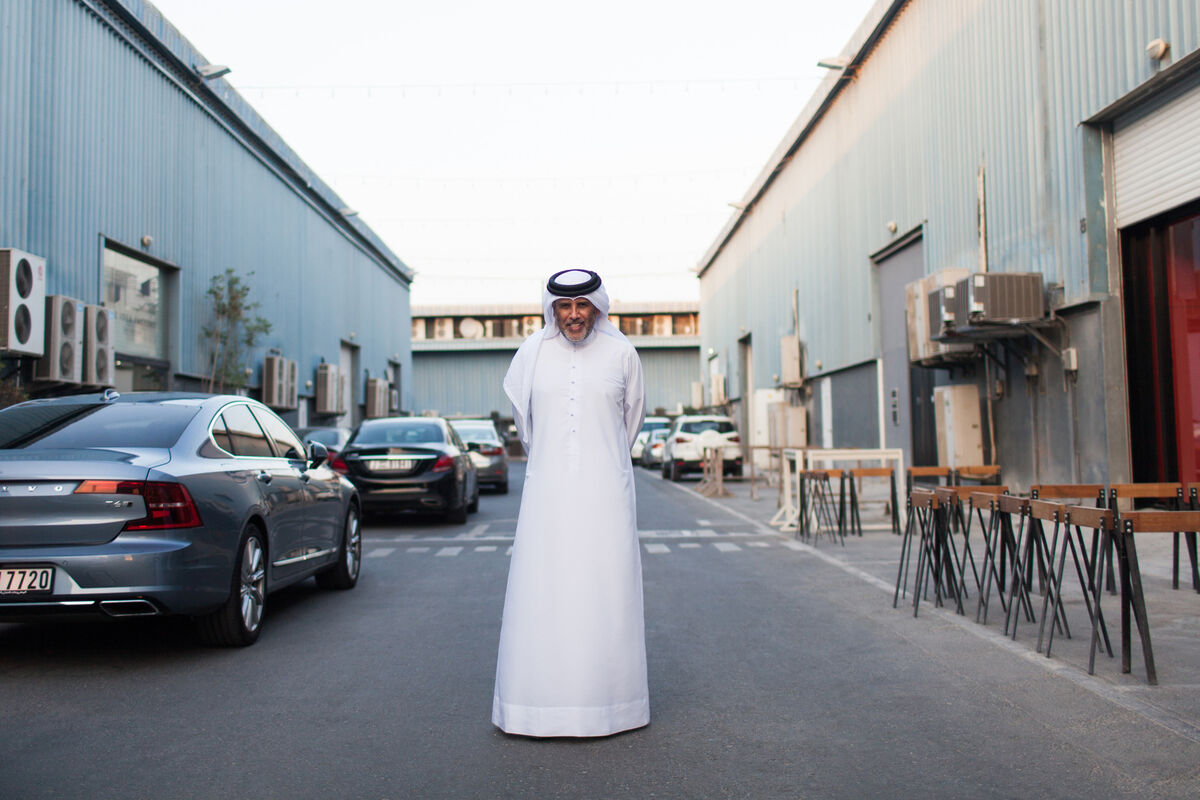 A Tradition of Entrepreneurship

The pioneering approach that has secured Alserkal Avenue’s key position in this complex ecosystem continues a tradition of entrepreneurship in the Alserkal family. The Alserkals acted as representatives of the British to the Trucial Sheikhdoms (a protectorate from 1820 to the creation of the UAE in 1971) until the turn of the 20th century. They brought the first car to Dubai (a Ford Model T) and the first steam engine vessel. In 1960, Alserkal’s grandfather was involved in setting up the UAE’s first telecommunication firm, Dubai State Telephone Company Limited. He also imported the first electric generator and distributed power by “charging [people] by the bulb,” explained Alserkal, laughing.
“We are fortunate as a family to have been innovative historically, and now to be part of supporting a cause, which is art and culture,” he said.
Alserkal first caught the contemporary art bug visiting art galleries in San Diego, California, where he studied business administration in the 1990s. He doesn’t personally collect art—though he says he looks forward to doing so some day—but he’s always been close to the galleries based at the Avenue. He comes to all the shows. He travels to see “his” galleries’ booths at international art fairs, invites the dealers to the lavish dinners he throws at every opportunity, and introduces them to the museum groups who pay the Avenue a visit.
“He's been a gentleman from the very beginning,” said Carbon 12’s Knotzer.

“With what's going on around the world, the only table we can all sit around and discuss, is the table of art and culture.”

But Dubai as a whole still has a way to go before rivaling the world’s major art hubs. Knotzer estimates the number of “significant” collectors based in town at “about 10.” According to The Art Market | 2017, a report by Clare McAndrew underwritten by Art Basel and UBS, Middle Eastern collectors accounted for only two percent of the buyers at the top-tier auction houses. Locally, the middle market relies heavily on expats, many of whom leave after a few years.
What’s more, art publishing, particularly in Arabic, “is still sorely needed,” according to Jameel Arts Centre’s Carver, who also deplores the slim art coverage in the UAE mainstream media. And I heard again and again that Dubai was suffering from the lack of a contemporary art museum of international stature. Art Dubai’s Ayad gets bored of the latter criticism.
“We’ve come this far without a museum,” she said. “This country was unified in 1971, and what we have managed to achieve in such a short amount of time is really admirable.”
As long as the fair, the galleries, and Alserkal remains as committed as they are now—and culture continues to be at top of the emirates’ economic diversification agenda—chances are the art scene will continue to grow. In a country still uncomfortably caught between rigid tradition and innovation, the art world, and its intrinsically global outlook, has a vital role to play.
“With what's going on around the world, the only table we can all sit around and discuss, is the table of art and culture,” said Alserkal. At this table, he certainly is an enlightened host.
Coline Milliard
Header image: Portrait of Abdelmonem Bin Eisa Alserkal standing outside of the OMA-designed space, Concrete, on Alserkal Avenue, Dubai, by Anna Maria Nielsen for Artsy.
Posted by Cabecilha at 7:09:00 PM No comments: