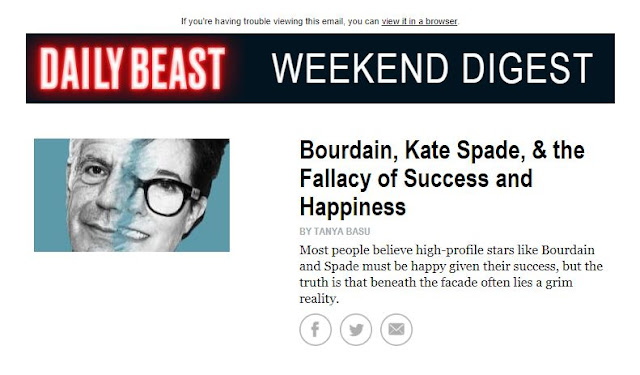 Most people believe high-profile stars like Bourdain and Spade must be happy given their success, but the truth is that beneath the facade often lies a grim reality.

On Tuesday morning, fashion designer Kate Spade committed suicide. A few days later, on Friday afternoon in Strasbourg, France, chef Anthony Bourdain committed suicide.
What stands out both Spade’s and Bourdain’s death is the fact that they represented, for many, what seemed to be success and happiness. Spade had sold her eponymous handbag collection in 2007, had a husband and a teenage daughter, and had swept up every fashion award humanly possible, and then some.
Likewise, Bourdain was a giant in his field, working up the ranks in the kitchen to becoming a talented chef, a widely read author, and achieving the pinnacle of his success in televised food documentaries that flung him to perilous corners of the Earth, first through No Reservations and then through Parts Unknown.
Beneath that sheen of success and happiness, however, there was depression—deep, unsettling, tumultuous depression that rocked both Spade and Bourdain, ultimately leading them to commit suicide.
That’s a huge problem within the mental health community right now, which is reeling from the fact that not only did two well-liked, highly followed celebrities with strong fan following potentially spark a suicide contagion, but also a report out from the Centers for Disease Control and Prevention that proves what we’ve suspected: Suicide rates are spiking in every state in America, with about half of states seeing levels skyrocketing 30 percent more than previously reported.
One of the most astonishing facts reported in the CDC’s Morbidity and Mortality Weekly Report is the fact that 54 percent of people who committed suicide had previously unknown mental health issues. Only after they died did loved ones figure out that there were issues beneath their outward facade.
“The first thing is that even people who have a lot of support are not immune to mental health issues behind the scenes,” Lauren Appio, a psychologist with a private practice in Manhattan who is trained in dealing with patients dealing with suicide ideation and depression, told The Daily Beast. “They might say, ‘I have it all. Why can’t I be satisfied, be content, move past this?’”

Kate Spade and the Troubling Rise in Female Suicides

Your Poop Might Hold the Key to Saving Lives

Appio said that the misconception that people who “have it all” can’t have depression or be dealing with mental health issues often works against patients as well, wondering why they are incapable of being happy if they have a dream family and relationship, a job others lust after, and all the perks of fame and success.
That’s the wrong way to think about it. While many equate suicide with those who have struggled with mental illness for years or dealt with substance abuse and have had an established history of trying to deal with their inner demons. But Appio said that those most at risk of suicide ideation are often the very people who don’t have such a history.
That said, Appio stressed that there are warning signs. She said they almost always told someone about the issues they were dealing with: talking about wanting to die and kill themselves, researching methods of suicide online, and expressing hopelessness, feeling trapped or like a burden on others.
But a potential obstacle might be those who are close to the patient and might not understand why success and “having it all” doesn’t mean happiness. “People might unintentionally invalidate them by asking, ‘What’s wrong? Why don’t you snap out of it?’”
And that invalidation can be extremely dangerous in putting a person toward the path of suicide.
Dr. Waguih William IsHak is a professor of psychiatry at Cedars-Sinai in Los Angeles agreed that people who might seem like they are successful and happy are at risk of hiding depression, and can be so good at it that they don’t pique concern from even those closest to them.
What can be especially frightening is the point at which a depressed person has internally made the decision to commit suicide, and reach a sense of relief.
“So many people don’t see it [suicide] coming because they [eventual victims] seem to be in such a good mood and so relieved,” IsHak said. “It’s a scary thing.”
That makes the science of trying to understand when a person is most at risk of committing suicide essential. Yet, because of stigma, science funding, and the complex psychology behind suicide, it’s been one of the least funded and understood mechanisms of our neuroscience.
In fact, IsHak called suicide neuroscience and our understanding of it “underdeveloped.” “We’ve looked at biochemicals, and we have some ideas, but a lot of the studies don’t have anything reliable to show.”
One potential area of promise is Brodmann Area 25, a part of the cerebral cortex in the brain that has shown some linkage with depression and suicide. In people who are depressed and are considering suicide, some preliminary research seems to suggest that there is low metabolic activity in the area, with low oxygen rates and glucose. IsHak cautioned the research is early and that what we know about Brodmann Area 25 can hardly be used for prediction. But it’s a start.
Some work in this arena has been done, and to great effect. Kelly Posner at Columbia University helped establish the Columbia-Suicide Severity Rating Scale, a series of questions that can be asked of anyone and has proven remarkably effective in preventing suicide and helping to treat depression.
But it’s not enough. Perhaps the biggest obstacle towards treating suicide as the public health issue it is is the fact that there is no federally funded program, particularly focused on the most vulnerable population of adults.
“Suicide research has not become a national priority, and it should,” IsHak said. “It would open the door to using biomarkers and brain imaging to study people at risk of suicide.”
The important thing to understand, according to experts, is that those who might seem happy, who might seem fortunate, who might not seem to have a reason to be anything but lucky are not immune to mental health struggles. For those wondering about Bourdain and Spade’s suicides, the question is often why. But the truth is complex and one that is lodged deep within their now silenced memory and mind. That they were successful did not preclude them from angst and pain, the type that pushed them over the edge into suicide; in fact, that contrast of their outward success and seemingly perfect life from the turmoil they dealt within themselves might have driven them to feel even more out of touch, hopeless, and isolated.
“We all know people like this, if we’re not them ourselves,” Appio noted. “We live in a culture where we’re motivated to hide and suppress our suffering in the name of seeming fine. There’s a pressure to persevere and be positive.
“It’s possible for people to hide,” she said. “But those warning signs slip through. That we we have to look out for.”
If you or a loved one are struggling with suicidal thoughts, please reach out to the National Suicide Prevention Lifeline at 1-800-273-TALK (8255).
Got a tip? Send it to The Daily Beast here.