Is This the End of Damien Hirst?

Is This the End of Damien Hirst? 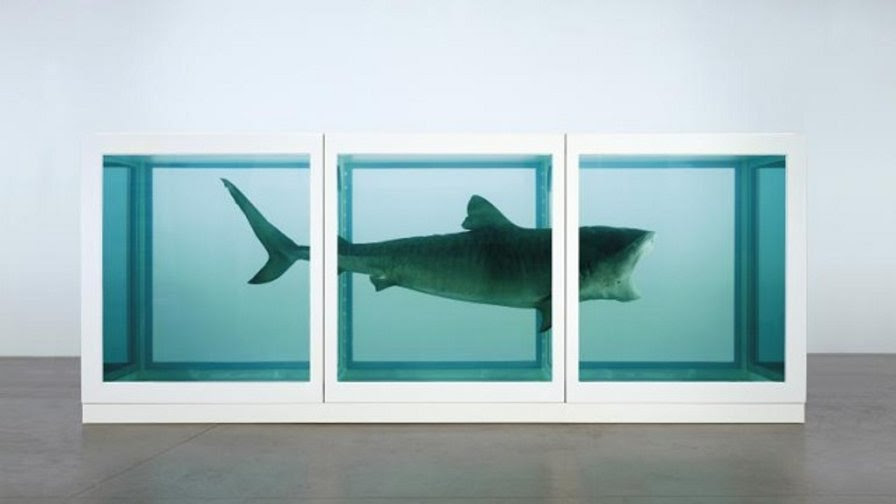 When news came out recently that artist Damien Hirst had ended his long and lucrative relationship with dealer Larry Gagosian and his international chain of Gagosian Galleries, there was more than a presumptive little dancing on the grave of Hirst’s career. It seemed that the man famous for his formaldehyded shark (in 1991’s The Physical Impossibility of Death in the Mind of Someone Living, shown above) was now chum in the art world waters. Esquire’s Stephen Marche not only announced the end of Damien Hirst, but also “the end of art as pure money.” But before we call in the undertakers, let’s undertake an analysis of whether this really is the end of Damien Hirst and the era of “art as pure money” he embodied.
Just last year, Hirst seemed to be on top of the art world. Hirst’s first major museum retrospective at the Tate Modern, timed to coincide with exhibits of his spot paintings the at 11 Gagosian-owned galleries around the globe, hinted that Hirst might finally break the glass ceiling of contemporary art and join the ranks of the “Old Masters” (and command “Old Master” money). Even his own studio webcam to show the artist at work, or rather the artists who did the work Hirst conceptualized, threatened to offer 24-7 Damien. And when you raise the ire of an acknowledged artist such as David Hockney, you know you’re either doing something right or something terribly, terribly wrong. All these signs and more pointed towards bigger and better things for Hirst.
Looking back now, however, they all look like a final, desperate push for acceptance and the monetary success that had eluded Hirst since the financial fiasco of For the Love of God, the diamond encrusted skull whose “sale” (or no sale) revealed the first chink in Hirst’s armor. The original YBA, or Young British Artist, part of the group that dominated the 1990s art scene with a punk rock sensibility coupled with a Wall Street lust for money, Hirst now seems as dated as the clothing and music of that time. “The [Hirst-Gagosian] breakup comes at the end of a sharp, sudden, virtually unprecedented decline of Hirst's career and represents something of a turning point for art, and possibly for culture more broadly,” Marche concludes. “It's the end of the era of pure money.”
Marche links Hirst’s fall with the 2008 global financial crisis. Just as people lost faith in the banking system, people lost faith in Hirst. The emperor no longer wore the posh clothes of the art world elite. Hirst’s kitschy spot paintings stood naked for what they were—unashamedly naked appeals for art prices based solely on name recognition, with not creative capital to back it up. Marche qualifies his claims by adding that “[t]he collapse of Hirst's career is not a sign of the end of money in art, of course. Money and art will always be intertwined.” Instead, “Hirst's breakup with Gagosian does signify the end of a kind of obsession that saw nothing other than money.” With Hirst’s fall comes “the return of messiness and humanism and a struggle beyond the gallery walls,” Marche concludes hopefully. “The navel gaze has swallowed itself. Art will have to be about something larger than its own value or go bankrupt.”
The optimist and idealist in me want to agree with Marche. I believe that the best art is always about more than just art itself. Duchamp started modern art on a revitalizing, self-analyzing path that has become in many ways a confounding Mobius strip.  Art in many ways has been walking a road to nowhere, led by people like Hirst, who have been abetted by Gagosian and others subsidizing the trip. I doubt that we’ve heard the last of Damien Hirst, since we probably haven’t even heard the first of the next “Damien Hirst.” But at least, as Marche writes, “the navel gaze has swallowed itself.” Instead of Hirst’s neat, mindless dots, let “messiness and humanism” show us why and how art matters.
[Image: Damien Hirst. The Physical Impossibility of Death in the Mind of Someone Living, 1991.]
Posted by Cabecilha at 5:05:00 PM No comments:

Contemporary Art and the Pale of History

The Boss Baby Dreamworks
Let me start by saying I have not seen The Boss Baby in theaters, nor do I intend to. I will be spending my hard-earned money seeing Beauty and the Beast for a second time. But I do not need to see Boss Baby to understand that it is a work of existential comedy on par with the work of Samuel Beckett. Just by reading the Wikipedia page, I feel as though I’ve discovered a work of psychological science fiction that will be examined by scholars for decades—centuries, even—to come.
The following are excerpts from The Boss Baby “Plot” section on Wikipedia, along with my analysis. Enjoy. Contemplate. Discover.
“…One day, Tim is surprised when a business suit-wearing infant shows up in a taxi at his house and Ted and Janice proudly call him Tim’s little brother.”
In this world, do infant children arrive by taxis? Do Tim’s parents (Ted and Janice) not realize that this baby has been gestated and delivered via conventional pregnancy? Already, the film plunges the audience into a science fiction world in which parents no longer conceive their own children. Perhaps this film is a companion to The Handmaid’s Tale.
“Soon, Tim learns that the baby can talk like an adult and he introduces himself as ‘The Boss Baby’.”
Babies no longer have names—they only have titles. This is truly a capitalist dystopia.
“Seeing an opportunity to be rid of him, Tim decides to record a conversation between him and other toddlers who are over at Tim’s house for a meeting (under the guise of a playdate by the parents) to do something about how puppies are receiving more love than babies.”
In this world, “love” is a limited resource, and evolution has failed if human offspring are no longer proper care that instead goes to dogs.
“The Boss Baby comes to Tim and has him to suck on a pacifier that transports them to Baby Corp, a place where infants with adult-like minds work to preserve infant love everywhere. They are virtual, so they cannot be seen or heard.”
A technology that will never be explained, or given to the masses. Capitalism does not improve things for everyone. It keeps the power of transportation out of the hands of the general population and has turned love into a business commodity. Is it Tim and Boss Baby that cannot be seen, or is it the working class?
“The Boss Baby explains to Tim that he was sent on a mission to see why puppies are getting more love than infants. He has infiltrated Tim’s residence because his parents work for Puppy Co., which is unleashing a new puppy on the day that employees take their children to work.”
A world in which child turns against parent. This is 1984, in 2017.
“The Boss Baby also explains that he stays intelligent by drinking a “Secret Baby Formula” which enables a baby to act like an adult. However, if a baby does not drink it after a period of time, he or she reverts to a regular baby.”
A world in which youth is fetishized above all else. Why can the employees of this company not be adults? Clearly they use “Secret Baby Formula” to undermine child employment laws.
“He hopes to receive a promotion after dealing with Puppy Co.’s new puppy, but when they overhear Boss Baby’s boss threaten to fire him for not bringing in information, thereby stranding him at the Templetons, he and Tim agree to work together to keep that from happening.”
If “Boss Baby” (again, nameless, his entire existence defined by his job) is hoping to receive a promotion, then he is not the “boss.” Who is the real Boss Baby? Perhaps there never was one.
“They discover that Francis used to be the head of Baby Corp. (and Boss Baby’s idol), but was forced out when it was discovered that his lactose intolerance kept the secret formula from working properly.”
This is a society in which transportation and virtual temporal projection exists, but not a baby formula without lactose: capitalism is a flawed system.
“Furious at their interference, Francis proceeds to lock Tim’s parents up so he can burn them with exhaust from a rocket used to launch the Forever Puppies.”
Ostensibly, the “Forever Puppies” were a concept that would be launched like a business, but in this terrible universe, they are physically launched via rocket. “Francis” plans to murder his own employees (Tim’s parents work at Puppy Co.) just as revenge against Boss Baby, who seemingly does not care for these parents at all, and was only assigned to their home as a corporate spy. There is no logic in this world, nor loyalty.
“Boss Baby opens the rocket to let the dogs out, so they can save Tim’s parents. After he successfully does that, he returns to baby state while still on the rocket, but Tim sings to him with a family song to show his appreciation, causing him to jump off of the rocket before it launches.”
An act of compassion forces Boss Baby to sacrifice his intelligence. Emotions are the enemy of logic.
“Francis, having reverted back to baby form, attempts to attack them again, but his brother interferes, stating that he’ll ‘raise him right this time’ now that he’s a baby again.”
Time is an endless loop, and there is no escape.
“Tim and Boss Baby, having grown closer, start to miss each other. Boss Baby, fed up, decides to be part of the Templeton family. He returns to the Templeton family as a regular baby named Theodore Lindsey.”
Give up your dreams, your career, your identity. We can give you a new one.

BELONGING | Who’s Guilty When It Comes to Crimes of Cultural Appropriation?

Who’s Guilty When It Comes to Crimes of Cultural Appropriation?

Why is a white artist disqualified from painting a portrait of Emmett Till? Should under-represented cultures have their own monopolies on art, fiction, and style? How cultural appropriation became a minefield.